Iranian press review: Revolutionary Guard gives details of attack on US base in Iraq 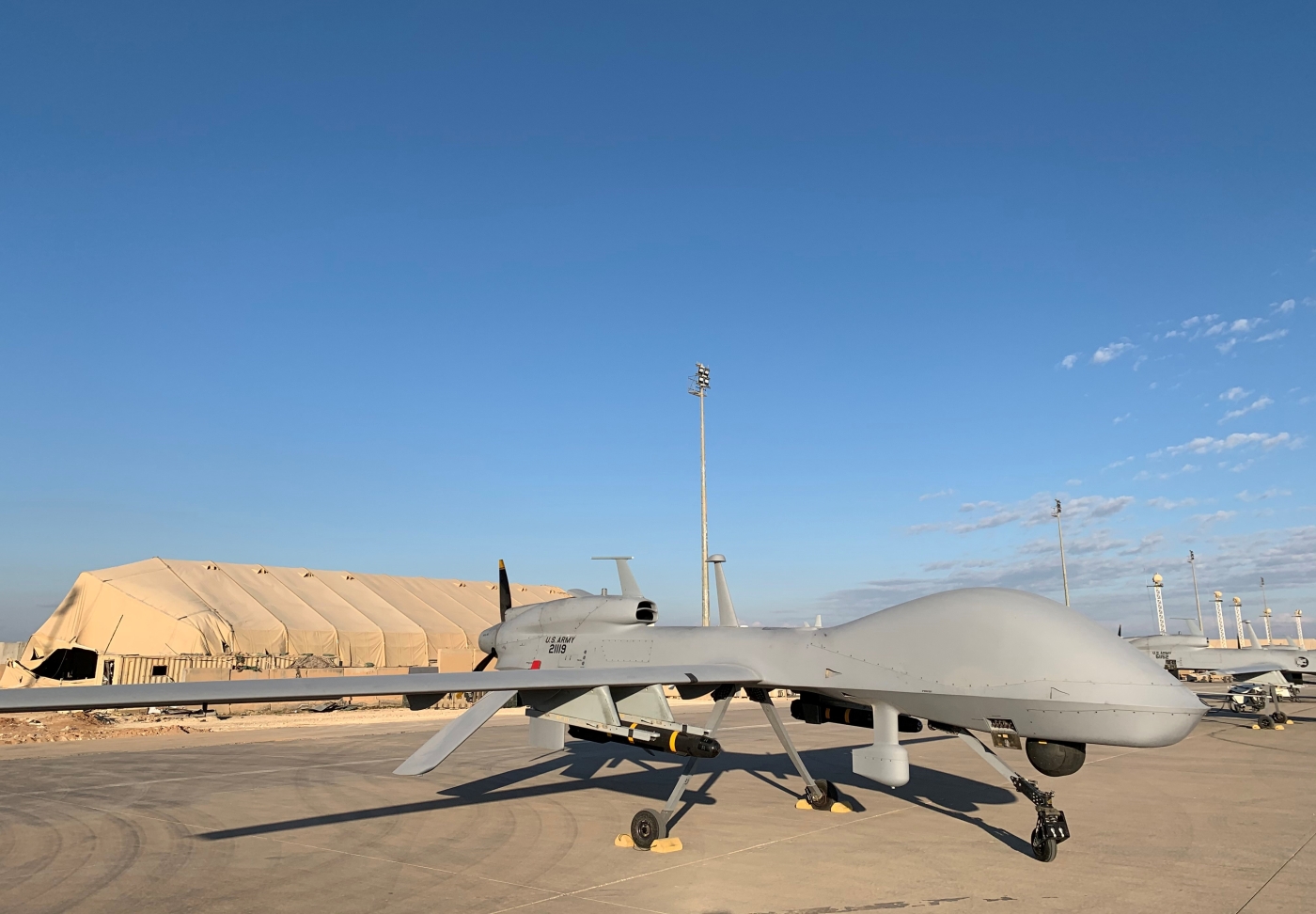 US army drones at the Ain al-Asad airbase in the western Iraqi province of Anbar, 13 January 2020 (AFP)
By
MEE correspondent

Iran’s Islamic Revolutionary Guard Corps (IRGC) has named the US military targets hit by Iranian missiles on 7 January in the aftermath of the US killing of a top Iranian military commander.

The semi-official Tasnim news agency, affiliated to the IRGC, claimed that the missiles did not target American fighter aircraft in the attack that wounded 11 US troops.

The main target, the agency said, was the US drone operation and command centre at the Ain al-Asad air base.

Along with the report, Tasnim posted images that it said showed the US base before and after the attack.

According to the news agency, the targets hit by the IRGC included the headquarters of the US's drone operation, the Apache helicopters’ repair shed and maintenance centre, the Boeing CH-47 Chinook helicopters’ ramp and hangar, and the ramps used for the V-22 Osprey tiltrotors and Super Hercules aircraft.

“Finally, the Americans have released some news about their casualties, and soon they will announce the damages on US army equipment,” Tasnim said.

Meanwhile, Iran’s official news agency, IRNA, has published an analysis about the possible reasons why US President Donald Trump in his first reaction to Iran’s attack said that no American soldiers had been wounded.

“[The first possibility is that] Trump was fully aware of what happened in Ain al-Asad, but he decided to stay silent to avoid domestic pressure,” IRNA wrote.

“Or, Pentagon officials had given him limited information about the damages, because they were worried about Trump’s reaction and the possible escalation of tensions with Iran."

Iranian commentators and sports officials have suggested that a decision by the Asian Football Confederation (AFC) banning Iran from hosting international matches was made due to pressure from Saudi Arabia and the United States.

The AFC informed Iran about the ban on Friday, following the escalation of tensions between Iran and the US, and the inadvertent downing of a Ukrainian jetliner by Iranian forces.

'Saudi Arabia is in a war with Yemen, but they are allowed to host the games'

The four Iranian football teams playing in the AFC champions league - Persepolis, Sepahan, Shahr Khodro and Esteghlal - have threatened to withdraw from the league if the AFC does not reverse its decision.

Mohammad Hassan Ansarifard, the director of Persepolis football club, told the Etemad daily that the AFC has acted against its own policy to keep football free from governmental interference.

“Saudi Arabia is in a war with Yemen, but they are allowed to host the games,” Ansarifard was quoted as saying. “Iraq is in the same situation and they can also host, but we cannot. This shows that the AFC’s decision was political.”

Nasser Ebrahimi, who led the Iranian men's national football team during the Iran-Iraq war (1980-88), has also accused the AFC of following the decisions made in Riyadh, and supported the idea of boycotting the AFC champions league by Iranian teams.

“Even during the [Iran-Iraq] war we hosted international matches and the safety and security of Iranian stadiums have been proved,” Ebrahimi told the newspaper.

The mid-January floods caused by heavy rain in Iran's southeast are estimated to have caused over $108m in damages to roads, bridges, homes and agricultural lands in Sistan and Baluchestan, the country’s poorest province, according to initial reports.

The flooding did not cause any deaths, but forced more than 12,000 people into emergency shelters, IRNA news agency reported.

Iran’s Roads and Urban Development Ministry said that the flood destroyed several main roads and bridges in the province and caused about $58m worth of damage to transportation infrastructure, the Arman daily reported.

The daily wrote that the damage to the agriculture sector was worth over $50m and the damage suffered by healthcare infrastructure was worth about $600,000.

Sistan and Baluchestan, bordering Pakistan, is the most underprivileged region in Iran. The province’s farmers have already been hit by a 10-year drought which has left villagers in dire poverty.

Hormozgan and Kerman are the other two provinces hit by the recent flood. The authorities put the cost of flooding damage in both provinces at about $109m in the agricultural and transportation sectors.

On Sunday, the ISNA news agency reported in a video that the province’s roads and agricultural fields were still covered by floodwater.

Tehran’s City Council has indicated that the capital province is the second worse in the country with regards to school safety, the Arman daily reported.

Sistan and Baluchistan was ranked the worst province in Iran for having the largest number of unsafe schools.

According to the daily, over 900,000 students in the Iranian capital are enrolled in 3,988 schools, 800 of which have been categorised as hazardous for students and teachers due to unsafe buildings.

The number of schools with yellow safety conditions - indicating that school buildings need strengthening - in Tehran is 1,235.

Education Ministry officials have also said that 16,000 classrooms in Tehran's poorest neighbourhoods must be demolished due to safety concerns. The number of unsafe classes in the entire country has reached 160,000, according to ISNA.

Mehrallah Rakhshani, head of Iranian schools reconstruction organisation, told ISNA that the reinforcement and reconstruction of all unsafe schools in the country needs a budget of $3bn. Media
Iranian press review: Blow to US forces 'yet to come in Iraq', says IRGC media