On visit to United States, Israeli premier also said he would continue to expand existing settlements in the West Bank Israeli Prime Minister Naftali Bennett has said he will not allow a Palestinian state to be created under his watch, in an interview ahead of his meeting with US President Joe Biden.

Bennett embarked on his first trip to Washington as Israeli premier earlier this week and met with US Secretary of State Antony Blinken and US Secretary of Defence Lloyd Austin on Wednesday.

He is scheduled to meet with Biden at the White House on Thursday. The two leaders are expected to discuss topics including Iran's nuclear deal, Gaza, the US withdrawal from Afghanistan and climate change.

In an interview with The New York Times published late on Tuesday, Bennett said he would expand existing illegal Israeli settlements in the occupied territories. 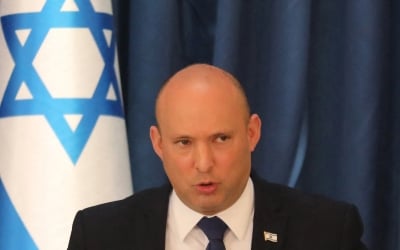 "This government will neither annex nor form a Palestinian state, everyone gets that," Bennett said.

The Israeli premier, who was a former head of the Yesha Council, an umbrella for Israeli Jewish settlements, said Israel will continue to expand existing Israeli settlements in the occupied West Bank, which are illegal under international law.

"Israel will continue the standard policy of natural growth," he said.

The Israeli leader has been opposed to the creation of an independent Palestinian state and declined to comment on whether he would block the Biden administration's plans to reopen a Palestinian consulate in East Jerusalem.

The United Nations, however, recognises East Jerusalem as occupied Palestinian territory and has said that "Israel cannot impose its own set of laws in occupied territory".

Bennett also said that Israel's blockade on the Gaza Strip would continue while Hamas, the de facto ruling power there, maintains weapons and launches rockets towards Israel.

Israel and Egypt have maintained a tight blockade on the territory since Hamas won legislative elections in 2006 and took control of the Strip, with the movement of people and goods in and out of Gaza severely restricted.

Bennett added that he would be prepared to enter another armed conflict against Hamas, even if it meant losing support from four Palestinian parliamentarians in his coalition.

"I will do what's necessary to secure my people," Bennett said. "I will not and never involve political considerations in defence- and security-related decisions."

Bennett approved the bombardment of what Israel claimed were Hamas locations in Gaza on Saturday and Monday overnight.

In the interview, Bennett said he will work to convince Biden to abandon his plan to reenter the Iran nuclear deal and present a new strategic vision on the Islamic Republic.

Bennett said the plan would include strengthening ties with Arab countries opposed to Iran's regional influence and nuclear ambitions, taking diplomatic and economic action against Iran, and continuing Israel’s clandestine attacks on Iran, including what he called "the grey-area stuff."

"What we need to do, and what we are doing, is forming a regional coalition of reasonable Arab countries, together with us, that will fend off and block this expansion and this desire for domination [by Iran]," Bennett said.

Since Biden assumed office in January, his administration has sought a return to the 2015 Iran nuclear deal.

In April, the US and Iran informally began talks on re-entering the deal, brokered by five other signatories to the agreement - Russia, China, France, Germany and the UK. 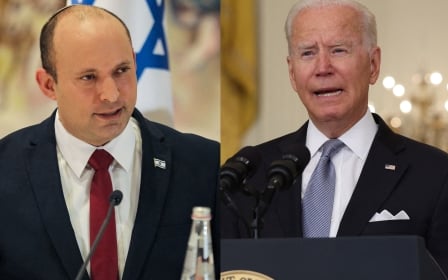