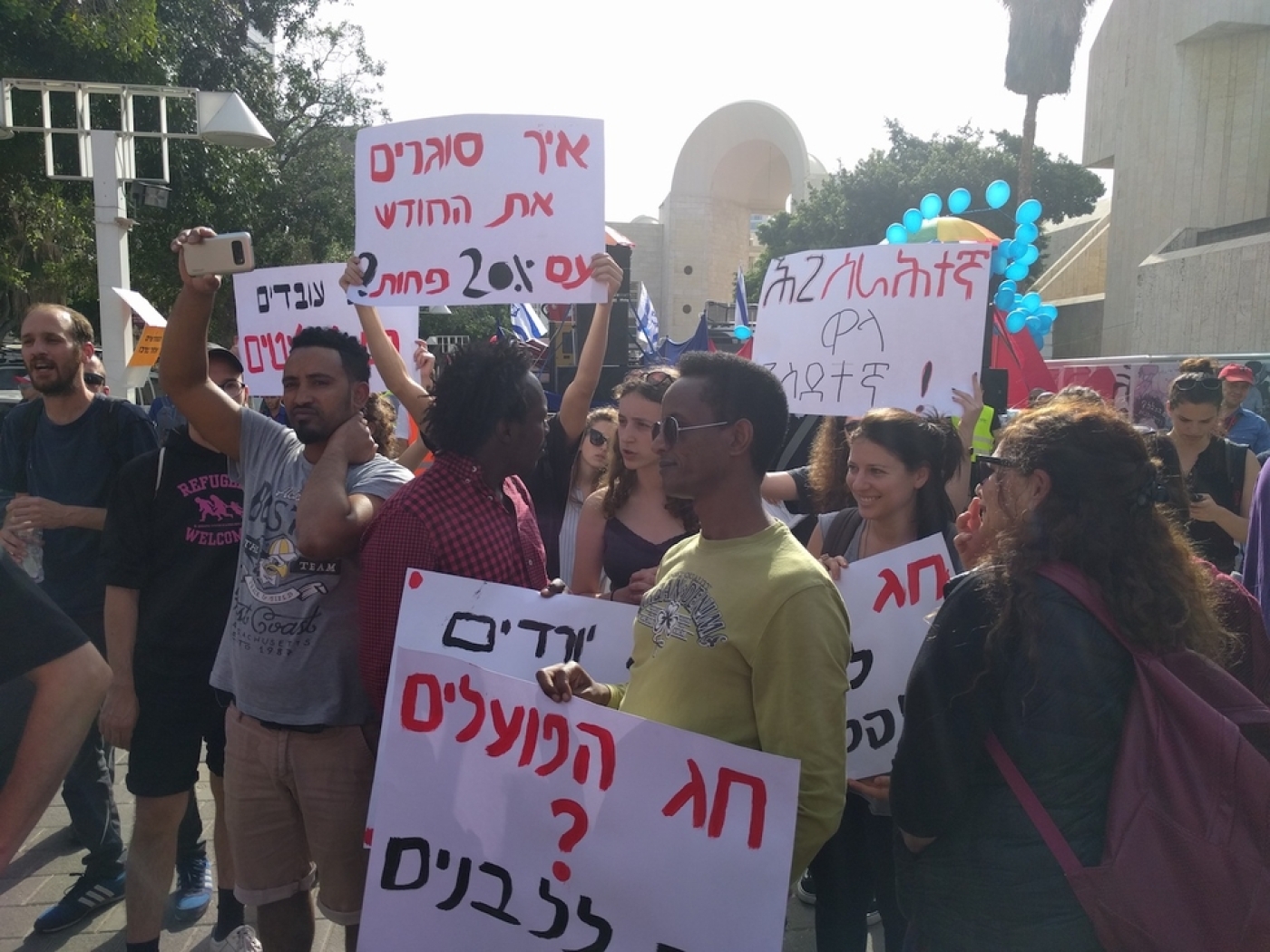 TEL AVIV, Israel - A new Israeli law has come into force that withholds 20 percent of asylum seeker pay until they leave Israel, in a move critics say is designed to force them out of the country.

The law instructs employers to transfer one fifth of an asylum seeker's monthly salaries to a closed fund only accessible if they permanently leave Israel.

Employers will also need to deposit a tax equal to 16 percent of the salary in the fund for what the law terms "foreign infiltrators".

The law came into force on Monday, widely celebrated as International Workers' Day.

It is the latest in a series of laws critics say are aimed at encouraging asylum seekers to leave Israel. According to the NGO Kav LaOved, the law "will undoubtedly push one of the weakest communities living in Israel to even greater poverty".

According to the government, the law is "on one hand, to insure the infiltrator's entitlement to pension rights and compensations if he gets fired and on the other hand to create a substantial incentive for the departure of the infiltrator on due date".

But for asylum seekers, there is a greater concern: the here and now.

Jel Pogobplbol Baget fled Darfur 14 years ago at the age of 13 after his village was burnt down by armed militias.

He made the dangerous journey across the Sinai desert to Israel as a teenager, leaving his family behind.

"I work at a supermarket for long hours doing physical and exhausting labour to fund my studies," he told MEE.

My days are very intense. Now the state wants to take 20 percent from my own money

"Juggling between work and university, my days are very intense. Now the state wants to take 20 percent from my own money, and keep it in a closed fund to force me into leaving.

"I am a refugee, I have nowhere to go. I've been living here for the past 10 years and the state did not reply to the asylum request I filed.

"Ten years with no health insurance, no welfare, no status and no stability in life."

Israel is home to more than 39,000 asylum seekers, most coming from Eritrea and Sudan. To date, only one Sudanese and eight Eritreans have been granted refugee status, a spokeswoman of the NGO "Hotline for Refugees and Migrants" told MEE.

Comparatively, on average in western countries 76 percent and 60 percent of Sudanese and Eritreans respectively get recognised as refugees, according to UNHCR data in 2015.

The Israeli Population and Immigration authority told Haaretz in 2016: "The quantity of requests cannot be measured against the number of approvals.

"Each request and its unique circumstances are examined individually in accordance with the international convention on refugees. As we've seen, whoever is found eligible for refugee status is granted it."

The NGO Kav LaOved disagreed: "Instead of passing hurtful laws, the time has come for Israel to check the thousands of asylum requests 'sitting on its desk' for many years, in order to finally determine who is entitled for defence."

The law proposal's explanatory remarks state "the purpose of the law is to encourage the legal and timely departure of foreign workers... and to supply them upon departure with a substantial sum that will help them start their lives out of Israel."

While debating the law in the Israeli parliament, government officials reportedly acknowledged that its main goals are to press asylum seekers to leave Israel and to encourage employers not to hire them.

A small group of Israelis and asylum seekers protested against the law on Thursday in Tel Aviv, in the run-up to the larger May Day celebrations and protests.

Slogans such as "Worker's day? Not for refugees" and "Workers rights - also for asylum seekers!" were written in Hebrew and Tigrinya, spoken in Ethiopia and Eritrea, on signs lifted by the protesters.

Togod Omer Adam, a prominent leader of the Sudanese asylum seeker community in Israel, delivered a speech during the demonstration voicing his concerns and thoughts about the law.

"I work in a cultural centre for asylum seekers, so naturally, I meet a lot of people," he said. "Yesterday I talked to an asylum seeker about the law, and I sensed how completely devastated she was.

"She cried, telling me that she's a single mother, working six days a week and hardly making 5000 Shekels a month, which after paying taxes is barely enough to pay for food and rent for her and her baby daughter."

"She has no idea what she will do if she gets 20 percent less on her next paycheque. I am going to be affected by this law as well, but as a man I can search for food in the trash to find something to eat.

"Women, single mothers with children to look after - what will they do?"

According to the law, asylum seekers that fail to meet a deadline to leave Israel will gradually lose a portion of the sum set aside in the fund as a penalty.

"The law is ridiculous," said a senior source in the restaurant business sector who wished to remain anonymous.

"We will continue to employ them, there is no alternative. They man the hardest jobs out there, jobs that no one else in the Israeli workforce today is willing to do.

"How can I look in the eyes of a person who is working for me, working so hard, and tell him that I'm cutting 20 percent of his salary?

It will lead us to raise the salaries of asylum seekers. It won't trigger their departure

"Would any other worker accept such a thing? They are putting us and them in an impossible situation.

"It will lead us to raise the salaries of asylum seekers. It won't trigger their departure like the state wants. It's not good to have underpaid and unhappy employees. How can I expect them to function at work?"

Sigal Rozen, one of the founders of the NGO Hotline for Refugees and Migrant Workers, said the law will have far-reaching unintended consequences.

"You have to understand that employers and asylum seekers already had to pay large taxes before the new law, now the situation will just be unreasonable."

Human rights groups have petitioned the Israeli high court of justice in hope of canceling the law. It is not yet determined when the court will sit to discuss the petition.

Afwerki Teame, an asylum seeker from Eritrea, told MEE that he had just been released from the Holot detention centre and fears he will not be able to find a job because of the law.

"I've been detained in Holot for an entire year and could not work. All I got was 16 shekels per day for an allowance," he said.

"Now I am finally free, but I have to deal with this law. The extra taxes employers need to pay to hire me will make me too expensive to employ and I'm afraid I might remain jobless.

"The former interior minister, Eli Yishai, said 'I will make their existence in Israel miserable until they leave', and this is still the policy."

Holot is an isolated open detention centre built in 2013, where the state arbitrarily holds hundreds of asylum seekers in an attempt to depress them and make them leave.

Citizens of Sudan and Eritrea are protected under international law by the non-refoulment principle, and thus cannot be forcefully deported to their countries of origin.

Not wishing to clearly violate this principle, Israel has been trying to press asylum seekers to accept a sum of $3,500 and self-deport to a third country, usually Uganda or Rwanda, in a process named "voluntary departure".

This new tax is added to existing practices of mass detention, denial of healthcare and welfare rights, and snail-paced asylum decisions.

Evidence of asylum seekers who were pushed to leave to Uganda or Rwanda reveal that the vast majority didn't receive visa permits in these countries and were forced to continue searching for refuge elsewhere.

Every three months the Israeli Population and Immigration Authority publishes a report on the progress of the "voluntary departure" campaign.

According to recently published data, 15,010 asylum seekers from Eritrea and Sudan left Israel between 2013 and March 2017.

Shortly after the demonstration against the law ended, hundreds of Darfurian asylum seekers gathered in south Tel Aviv to commemorate the 14th year of genocide in Darfur.

The annual event was held in Arabic, Hebrew and English, and included poetry, a music performance, and various speeches.

"As we meet in this difficult evening, the Sudanese government is still killing dozens of our people daily, raping women and girls, targeting students and using chemical weapons on innocent civilians," said one of the speakers.

"We gathered here today to remember all those who have died, and to express our hope that next year the genocide will stop and all refugees will be safely home."

The prime minister, Benjamin Netanyahu, mentioned Sudan as an example of cases "where the world is still standing from a distance, failing to prevent genocide".

Wali Suliman, an asylum seeker who fled the genocide in Darfur, told MEE at the event: "A few days ago, the Jewish people commemorated the tragedy of the Holocaust. It's important to me they come here too.

"Jewish Israelis say they remember their tragedy but they are not empathetic towards us nor are they interested in our stories, especially the current right-wing government," he said.