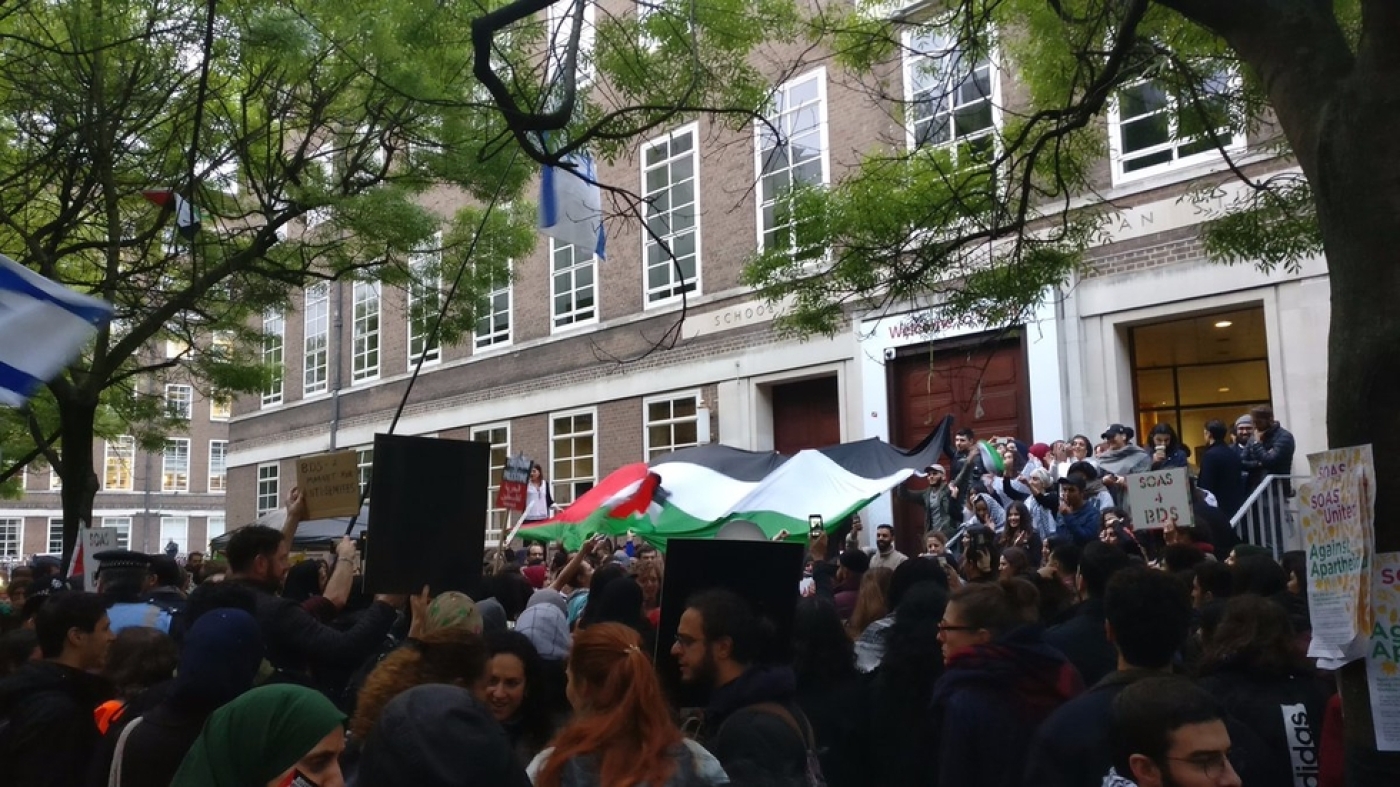 Hundreds of students at the School of Oriental and African Studies (SOAS) in London protested on Thursday against Israel's ambassador to Britain, who spoke at the university.

Mark Regev, previously a spokesman for Israeli Prime Minister Benjamin Netanyahu, gave a lecture at SOAS after he was invited by the university's Jewish and United Nations societies.

The protests, which were held under the banner "apartheid off campus," was countered by more than 60 pro-Israeli demonstrators.

Fayrouz, who is a SOAS student and organiser of the demonstration against Regev, told Middle East Eye that the march was staged to "oppose apartheid on campus".

"We are out here today to show Mark Regev and the management at SOAS that students and staff will not tolerate apartheid, and that we stand in solidarity with Palestinians who have had their lives ruined by occupation," Fayrouz said.

"This protest was about showing the diversity at SOAS and celebrating different struggles and resistance on campus."

This is the current view outside SOAS as pro-Palestine protestors gather to oppose Mark Regev speaking at the university pic.twitter.com/XxNKg1AJjK

Sharon, one of the pro-Israeli protesters, described the pro-Palestine demonstration as an affront to free speech.

"I came because I support freedom of speech and Jewish students who feel threatened and intimidated on their own campus."

Many Palestinian students who were approached by MEE refused to comment out of fear that any evidence of attending the demonstration would prevent them from entering Israel and the occupied Palestinian territories because of Israel's "anti-boycott" law.

In February, Israel's parliament passed an anti-boycott law which prohibits individuals who have called for boycotting Israel from entering the country or the occupied Palestinian territories.

Sharon, who supported Regev speaking at SOAS, said: "The anti-boycott law isn't a good thing but it's a complex solution that isn't helped by BDS (Boycott, Divestment and Sanction movement) which believes that Israel should not exist."

The BDS movement calls for Israel to adhere to international law by ending its occupation of the West Bank, ending the blockade on the Gaza Strip and ensuring equal rights for Palestinians living in Israel.

Inside the event, Regev criticised the pro-Palestine protesters. "By supporting an uncompromising, maximalist stance, are the protesters outside serving the Palestinian cause?" he asked.

Enjoyed an engaging discussion about Israel & Middle East with @SOAS students. Thanks to SOAS JSoc, Chair Prof @Eric_Heinze_ & all who came. pic.twitter.com/6Z0LSC83FT

He also said that "extremist speakers were invited to SOAS over the years, with no protest; the indignation toward Israel is very selective."

A statement by the SOAS Jewish Society had warned protesters that armed police were expected to be on campus while Regev was speaking.

Days prior to the event, more than 40 student societies and 100 SOAS academics had signed an open letter opposing the Israeli ambassador being given a platform to speak at the university.

The United Nations society at SOAS, which initially agreed to co-host the event, pulled its support for Regev's talk on Wednesday evening, without providing an explanation.

The SOAS Students’ Union also challenged the university management for agreeing to host the event and said it feared for the safety of Israeli and Palestinian students wanting to "engage freely" in a debate with Regev about Israel’s anti-boycott law.

There had been no visits by any Israeli diplomatic officials to SOAS since 2005, after its students' union became the first in the country to support the BDS campaign.

Two years ago, SOAS students and staff voted for the school to formally endorse an academic boycott of Israeli institutions as part of the BDS movement.