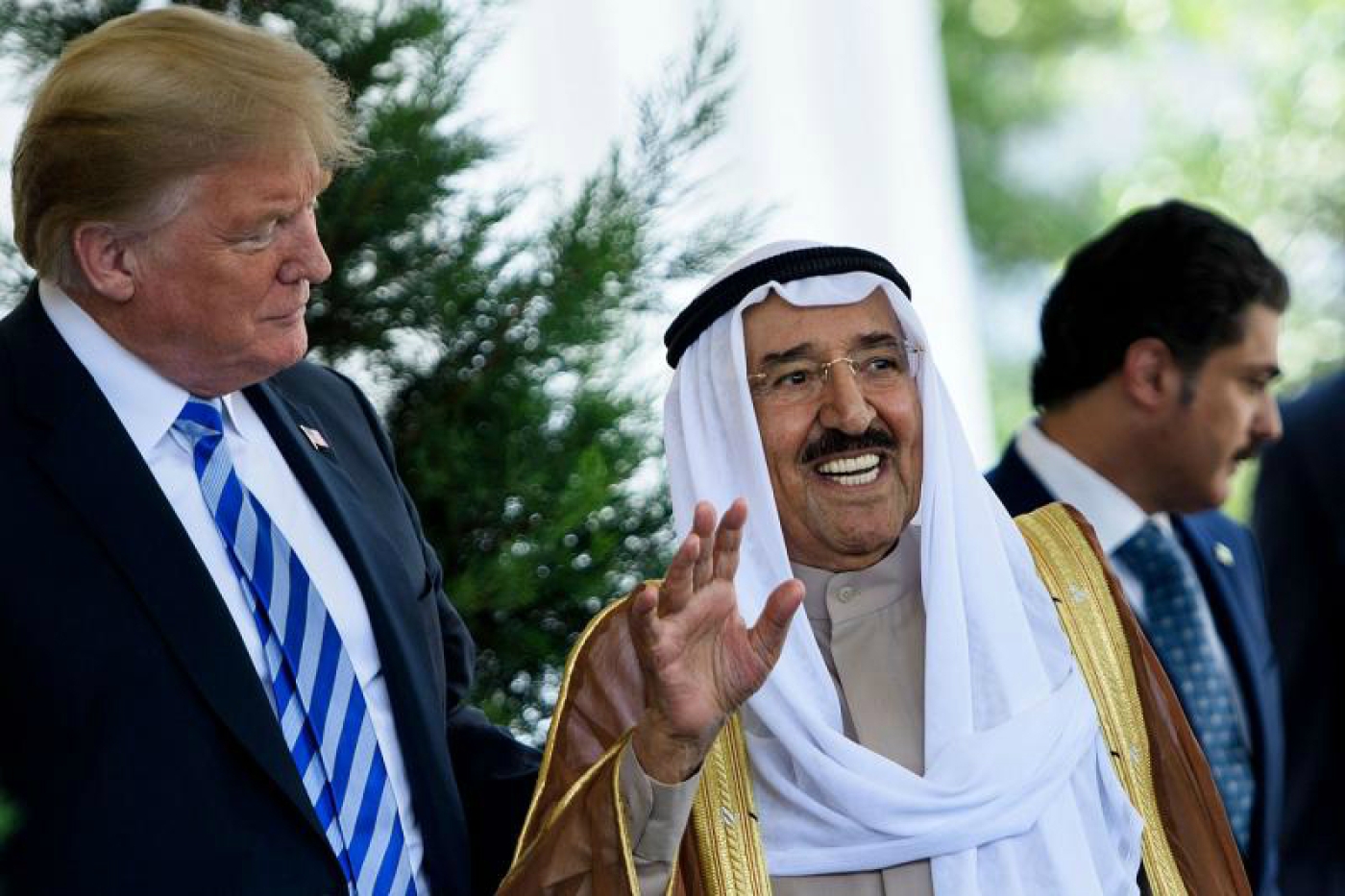 Sheikh Nasser Sabah al-Ahmad al-Sabah accepts the US Legion of Merit, Degree Chief Commander on behalf of his father the Kuwaiti emir during a ceremony at the White House (AFP)
By
Yasmena al-Mulla
in
Kuwait City

Recent remarks made by US President Donald Trump, claiming that Kuwait could be the next country to normalise relations with Israel, have been met with a firm denial by the state's cabinet of ministers and a senior government official.

Trump's claims that Kuwait would follow in the footsteps of the UAE and Bahrain had caused controversy in the state, where many Kuwaitis had denounced the accords.

At a ceremony in Washington on Friday, Trump awarded the US Legion of Merit, Degree Chief Commander, to Kuwaiti Emir Sheikh Sabah al-Ahmad al-Jaber al-Sabah.

The emir’s eldest son, Sheikh Nasser Sabah al-Ahmad al-Sabah, accepted the award, the first time the honour had been given since 1991, on behalf of his father.

At a White House press briefing following the ceremony, Trump said: “We are so excited that we signed the first two countries and I think they’ll (Kuwait) end up fairly quickly being a part of it.”

In response, Kuwait's cabinet of ministers put out a statement on Monday stating: “The cabinet affirms that the Palestinian cause is the first and most important issue to Arabs and Muslims and the State of Kuwait stands by the Palestinian people.”

The statement also reaffirmed Kuwait’s commitment to the Arab Peace Initiative (API), which stipulates a two-state solution, East Jerusalem as the Palestinian capital, return to the 1967 borders and the return of refugees.

Also on Monday, a senior government source told Kuwait's Al Qabas newspaper that the state maintained its firm and unaltered position in supporting the Palestinians and would be the last country to normalise relations with Israel.

The cabinet of ministers' remarks were the first public statement by the Kuwaiti government since the signing of the normalisation accords on 15 September.

Dr Abdullah al-Shayji, former chairman of the political science department at Kuwait University, told Middle East Eye: “The fact that a senior government official and the cabinet of ministers spoke goes to show that Kuwait is committed to its official position and will not be waivered.”

Bader al-Saif, assistant professor of history at Kuwait University, said “For Kuwait to come out with a statement reiterating its position on Palestine is simply because Trump spoke on behalf of Kuwait and said Kuwait is excited and will join the normalisation path very soon.

"So that merited a response about whether Kuwait is headed in a new direction or reaffirming its long-standing position, which expectedly turned out to be the latter,” Saif told MEE.

Emphasising that the choice of words reflected strong support for the Palestinians from Kuwait, Saif said: “We saw a well-worded statement by the cabinet of ministers that stands by the API, which is a positive development because mentioning details such as the right of return does not usually come up in statements of that format.

"So for the government to single it out shows not only are they supportive of the Palestinian cause but they are going the extra mile to show Kuwait standing by Palestinians' right to decide what they want.”

Agreeing, Abdullah Boftain, deputy editor-in-chief of the Kuwait Times, told Middle East Eye: “The government's position is firm and the statement that came out on Monday is simply to reiterate its commitment to the Palestinian cause.”

Mondays statements were not unexpected, given that over the years various Kuwaiti MPs have been vocal in rejecting any form of normalisation with Israel.

Last month, following the announcement of the UAE-Israel deal, 38 out of the 50 MPs in Kuwait's national assembly put out a statement calling on the government to reaffirm its position against normalising relations with Israel.

“It is not a simple stroke of a pen that starts or ends a process or transforms positions in Kuwait," Saif said.

"There is a process in Kuwait and it entails going back to the people through their representatives, hence Kuwaiti decision-making is well tied to the public pulse.”

After Trump’s announcement of his Middle East plan earlier this year, dubbed the "deal of the century", Marzouq al-Ghanim, the speaker of the national assembly, said: “On behalf of all the Arab and Islamic people, and all honourable and free people, I say these documents, and the so-called ‘deal of the century,’ belong in the dustbin of history.”

Videos then circulated on social media of Ghanim throwing the documents in the bin during an emergency meeting at the Arab Parliament in Amman.

“Kuwait is unlike many other Arab countries, especially in the GCC, as it has a unanimous agreement on the issue of the Palestinian cause from the executive to the legislative branch, as well as the media, political groups and intellects,” said Shayji.

On Monday, more than 40 civil society organisations called on the national assembly and the government to urgently pass a law criminalising normalisation with “the Zionist Enemy”, as Israel is often referred to.

The Kuwaiti chapter of the Boycott, Divestment and Sanctions (BDS) movement has also signed an agreement that supports Palestinian rights and is against normalisation in all forms.

The Palestine Charter, which was launched last week, has already received more than one million signatures, from various Arab entities and individuals, including numerous Kuwaiti organisations and citizens.

“The role of civil society is to show and highlight to the international community the Kuwaiti government and peoples’ stance,” said Boftain

Again reflecting public opposition, during a football match on Monday, supporters of Kuwait's Al-Arabi football club held up a sign that read "No to normalisation".

The close relationship between Kuwait and Palestine dates back more than 70 years, when the Gulf country accepted Palestinian refugees after the 1948 Nakba - when hundreds of thousands of Palestinians were forced to flee their lands following the establishment of an Israeli state.

By 1965, there were around 78,000 Palestinians residing in Kuwait, according to the International Migration Review. Saif highlighted the fact that during the 1960s, around 48 percent of Kuwait's public-sector employees were Palestinians.

During the 1967 Middle East war, Kuwait was part of the Arab coalition which fought against Israel.

Thousands of Palestinians were forced to leave Kuwait as a consequence of Arafat’s support, and it was not until his death in 2004 that the relationship between the two sides began to strengthen.

“Even when the relationship between the two were strained, Kuwait remained committed to the Palestinian cause, which goes to show that Kuwait’s policy is fixed and is a matter of principle,” said Boftain.

During the 2002 Arab League Summit in Beirut, Kuwait, along with other Arab countries, adopted the Arab Peace Initiative, which provided Israel with an opportunity to normalise relations collectively with all Arab states.

Under the Saudi-backed initiative, in return Israel would withdraw from the occupied territories, address the right of return for refugees and establish East Jerusalem as Palestine’s capital. However, the offer was never accepted by Israel.

'Even when the relationship between the two were strained, Kuwait remained committed to the Palestinian cause'

In 2018, serving as a non-permanent member to the United Nations Security Council, Kuwait proposed a draft resolution that condemned, “excessive, disproportionate and indiscriminate force” against the Palestinians.

The Security Council failed to adopt the resolution as the United States, a permanent member with veto powers, voted against the draft.

In addition to political support, the Kuwaiti government, spearheaded by the current emir, along with the Kuwaiti public, have throughout the years assisted Palestinians by providing them with humanitarian and development aid.

Following the 2014 Gaza War, Kuwait donated 61m Kuwaiti dinars ($200m) to Palestine in an effort to rebuild homes and infrastructure that were destroyed by Israel.

At the time, Marc Lassouaoui, chief of UNRWA's donor relations divisions, said: “Kuwait has long been an important and consistent donor to UNRWA. "Since 2013, their contributions to the Agency have totaled $135m, including $65m for the agency's operations in Syria.

Earlier this year, a road in Gaza was named after the emir for his continuous support to the Palestinian people. 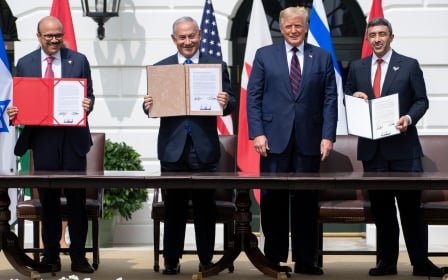 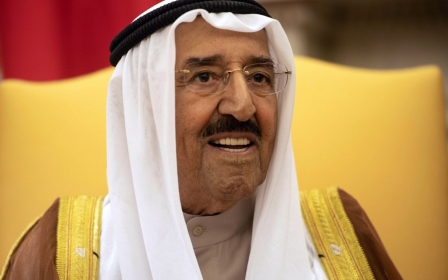