Arab normalisation with Israel: Who is next?

Trump has said five countries might follow in the UAE and Bahrain's footsteps - but which ones was he referring to? 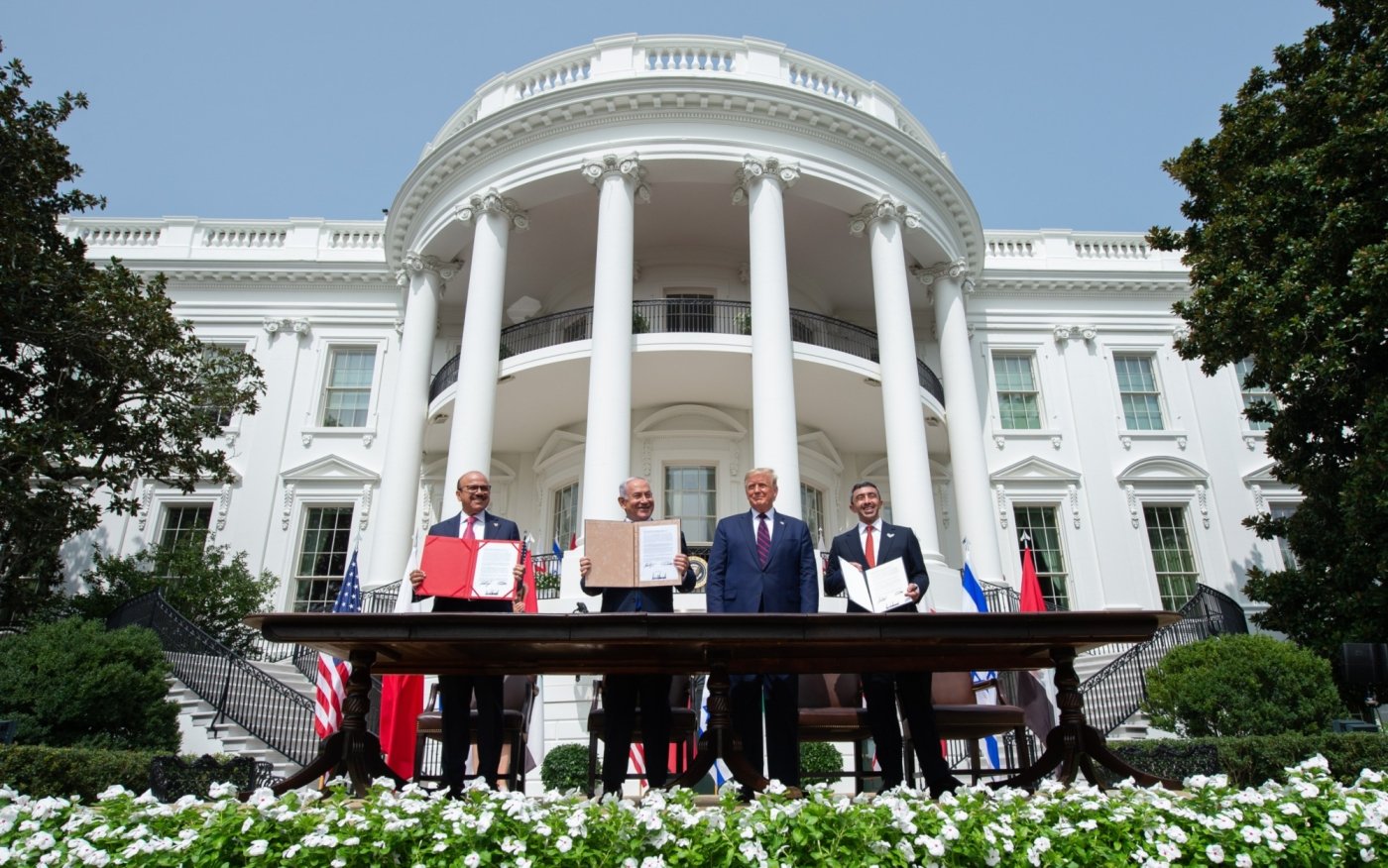 "We're very far down the road with about five countries, five additional countries," Trump said, without naming them.

Speculation has been rife since the UAE announced it was normalising relations with Israel on 13 August over which other Arab states might follow suit - with Bahrain announcing on Friday that it too would establish official ties.

Before last month, the only Arab states to have peace treaties with Israel were neighbouring Egypt and Jordan - both of which had lands occupied by Israel following the 1967 war.

A number of Arab states - such as Qatar, Kuwait and Algeria - have categorically rejected the possibility of having full diplomatic relations with Israel so long as a resolution isn't reached regarding its occupation of Palestinian territories and the establishment of a viable Palestinian state - and seem likely to maintain this position.

Meanwhile, some other states such as Libya, Syria and Iraq are busy dealing with their own internal conflicts and tensions, making such a controversial diplomatic move unlikely in the near future.

This leaves a few countries which have been regularly seen as potential candidates - although circumstances are far from simple for many of these governments. Although there is always the possibility of an unlikely deal emerging, Middle East Eye has broken down the odds for the states most often cited as likely to follow suit.

Oman: Next in line?

It is highly likely that Oman, a Gulf Arab country, will follow in Bahraini and Emirati footsteps and sign a deal with Israel.

Israel's intelligence minister had predicted that Oman, along with Bahrain, would be the next Gulf countries to follow the UAE in formalising ties with Israel.

Like Bahrain, Muscat was quick to convey support for the UAE after the August deal.

Its foreign minister, Yousuf bin Alawi bin Abdullah, spoke with his Israeli counterpart Gabi Ashkenazi days after the UAE-Israel deal announcement in August, and the two discussed the “need to strengthen relations”.

Bin Abdullah also spoke with an official from Fatah, the ruling party of the Palestinian Authority, and expressed the sultanate’s support for a "comprehensive, just and lasting peace in the Middle East", and said that negotiations on an Israel-Palestine peace process needed to resume.

Despite Emirati and Bahraini statements, Palestinians have rubbished such claims as empty words.

Oman has already been in dialogue with Israel for years, with Netanyahu paying a rare visit to Oman in 2018 in what was seen as reflective of the Gulf country's desire to play an influential role in the region. Netanyahu was the first Israeli leader to visit the sultanate since Shimon Peres in 1996.

Trump has suggested that Saudi Arabia may be amongst the five countries expected to sign a normalisation agreement with Israel - but Saudi leadership has sent mixed signals on the topic.

"I spoke with the king of Saudi Arabia, and we had a great conversation. And I think positive things will happen there, too," Trump told reporters in Washington on Tuesday.

Saudi officials had previously stressed that the kingdom will not normalise relations with Israel outside of the framework of the Arab Peace Initiative, which calls for establishing a Palestinian state.

Saudi Foreign Minister Prince Faisal bin Farhan al-Saud has said that his government’s position in support of a Palestinian state with East Jerusalem as its capital had not changed.

“The kingdom's firm and established positions towards the Palestinian cause and the Palestinian people will not change by allowing the passage through the kingdom's airspace for flights coming to and departing from the United Arab Emirates to all countries, and the kingdom appreciates all efforts aimed at achieving a just and lasting peace in accordance with the Arab Peace Initiative,” he wrote on Twitter earlier this month.

However, Saudi Arabia has recently decided to allow the first flight between Israel and the United Arab Emirates to cross its airspace, a move hailed as a “tremendous breakthrough” by Netanyahu. A recent sermon by the imam of Mecca's Grand Mosque has been interpreted by some as a prelude to Saudi normalisation.

Middle East Eye revealed last month that Saudi Arabia's Crown Prince Mohammed bin Salman pulled out of a planned visit to Washington DC to meet Netanyahu, after he feared the news had leaked and that his presence in the US capital would become a "nightmare".

Sources told MEE that Trump and Kushner have been pushing for the meeting to happen to relaunch Bin Salman's image as a young Arab peacemaker, and shore up regional support for the deal between Israel and the UAE.

Israeli media has reported that there is currently a disagreement in Riyadh between Bin Salman and his father, King Salman, over normalisation.

Whereas the king opposes peace agreements with Israel, the crown prince reportedly "demonstrates greater openness, but has yet to give his consent to the move".

The king has reportedly told Trump in a recent phone call that Saudi Arabia is eager to achieve a fair and permanent solution to the Palestinian issue and that he appreciated Washington's effort to support peace.

According to the Saudi Press Agency, King Salman affirmed to Trump the "kingdom's keenness to reach a lasting and fair solution to the Palestinian cause to bring peace".

There are strong indicators that Sudan might follow in the footsteps of the UAE and Bahrain. However, divisions between the civilian and military components of the transitional government have highlighted domestic differences on the issue. The differences have been brought to the fore when the government sacked a foreign ministry spokesman following his praise of the UAE-Israel deal, and comments that Khartoum and Tel Aviv already had secret diplomatic relations.

Israel’s intelligence chief Yossi Cohen, however, confirmed that his government is in contact with Sudan and that normalisation is “part of the agenda” of their diplomatic relations.

Sudanese overtures have been viewed by some analysts as an attempt by Khartoum to get into Washington's good graces and obtain the lifting of crippling US sanctions.

Mauritania was among the first Arab countries to express support for the UAE following its deal with Israel in August.

The northwestern African country and member of the Arab League had full diplomatic relations with Israel in the past, but froze ties in 2009 in the aftermath of the Gaza war.

In a statement last month, its foreign ministry said it trusts the “wisdom and good judgement” of the UAE leadership in determining the nature of its relationship with Israel.

“The UAE possesses absolute sovereignty and complete independence in conducting its relations and assessing the positions it takes in accordance with its national interest and the interests of Arabs and Muslims,” the statement read.

Whereas Morocco did not issue an immediate reaction on the UAE-Israel deal, its prime minister, Saad-Eddin El-Othmani, declared his government’s rejection of normalisation with Israel more than a week later.

In the first official Moroccan reaction to the US-brokered deal, Othmani said: “Morocco’s stance, both that of the government, the king and the people, is to defend the legitimate rights of the Palestinian people and the Holy Mosque of Al-Aqsa.”

“These are red lines for Morocco, and hence our rejection of any compromises in this respect and any process of normalisation with the Zionist entity [Israel],” he added.

King Mohamed VI serves as the chairman of the Jerusalem committee at the Organisation of Islamic Cooperation, a position previously held by his late father King Hassan II.

Morocco and Israel began low-level ties in 1993 after an Israeli-Palestinian peace deal was reached. But Rabat suspended relations with Tel Aviv after the outbreak of a Palestinian uprising in 2000.

While the two countries do not have official ties, Moroccan activists have exposed frequent steps towards the normalisation of relations in recent years, which the government has denied or remained silent about. 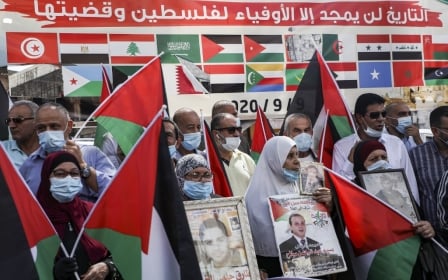 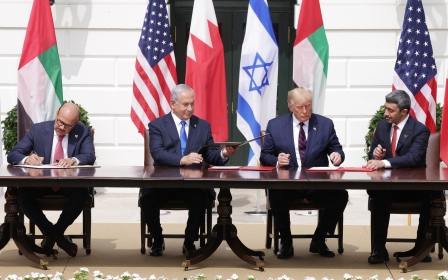