Normalisation with Israel: Where do Middle Eastern countries stand?

Since the UAE-Israel deal was announced last week, states in the region have felt pressured to declare their stance on establishing diplomatic ties with Israel 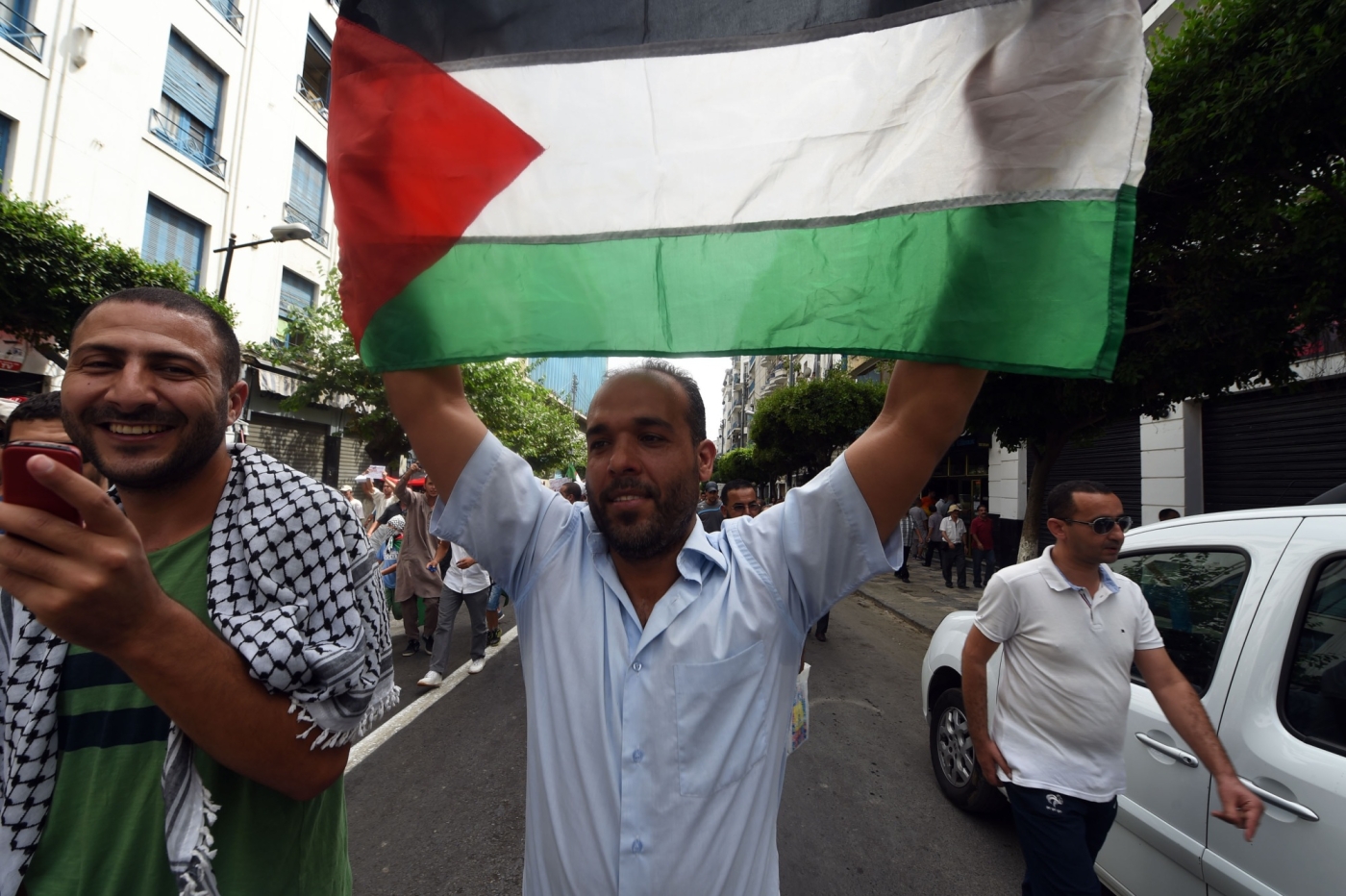 An Algerian demonstrator holds a Palestinian flag during a protest against the 2014 Israeli military offensive in the besieged Gaza Strip and in solidarity with Palestinians, on 25 July 2014 in the capital Algiers (AFP)
By
MEE staff

Since the UAE and Israel announced last week that they had reached a deal officially establishing diplomatic relations between the two countries, the reaction in the Middle East has been split.

Some Arab countries have expressed support for the UAE-Israel agreement publicly, with Bahrain, Oman and Egypt among the first countries in the world to welcome the deal without reservations.

Bahrain and Oman are expected by Israel to follow in the Emirati footsteps - whereas Egypt has had full diplomatic relations with Israel since 1980.

Others have meanwhile either refrained from commenting or denounced the deal as a normalisation of ties with Israel at the expense of the Palestinian cause, essentially giving Israel a green light to pursue its occupation policies.

Beyond bilateral ties between Tel Aviv and Abu Dhabi, the question has now been raised regarding which countries - if any - might follow suit.

The administration of US President Donald Trump, which brokered the deal, has hinted that other Arab states might do so.

But in a region where most countries have abstained for decades from having overt relations with Israel, and where civil society is widely perceived as being opposed to normalisation - where do some states stand?

"We are committed to the Arab Peace Plan and that is the best way forward to a settlement of the conflict and to normalisation with Israel with all states," the Saudi foreign minister told reporters in Berlin. "That said, any efforts that could promote peace in the region and that result in holding back the threat of annexation could be viewed as positive."

The Arab Peace Initiative - sponsored by Saudi Arabia in 2002 - promises Israel full ties with Arab states if a peace settlement is reached with the Palestinians.

Saudi state media has so far published views in favour of the UAE decision, which likely points to Riyadh's own tolerance to such opinions. The daily Okaz newspaper, for example, published a column that hailed the normalisation deal as reminiscent of the fall of the Berlin wall.

Trump said on Wednesday that he expected Saudi Arabia to join the UAE-Israel deal.

"I do," Trump replied when asked at a White House news conference if he expected the kingdom Arabia to join the deal.

The US president called the UAE-Israel accord a good deal and said that "countries that you wouldn't even believe want to come into that deal."

He did not name any other countries besides Saudi Arabia.

The Sudanese government on Wednesday sacked a foreign ministry spokesman, following his praise of the UAE-Israel deal.

Spokesman Haydar Sadig made comments to regional media and confirmed them to news agencies on Tuesday, calling the deal “a brave and bold step” and noting that Khartoum and Tel Aviv already have secret diplomatic contacts.

Israel’s intelligence chief Yossi Cohen, however, contradicted the Sudanese statements later on Wednesday, saying his government is in contact with Sudan and that normalisation is “part of the agenda” of their diplomatic relations.

The meeting at the time was viewed by Sudanese analysts as an attempt by Khartoum to get into Washington's good graces and obtain the lifting of crippling US sanctions.

The two officially reportedly spoke about the "need to strengthen relations" and "agreed to maintain direct and continual contact" and "continue the important dialogue between the two countries to advance the process of normalisation" in the region, a statement read.

However, bin Abdullah was replaced on Wednesday after 23 years as foreign minister - leading to some speculation. However, analysts have stopped short of saying the move was caused by the call with Ashkenazi, particularly given the fact that bin Abdullah had already publicly called for normalisation in the past.

Lebanese President Michel Aoun initially commented on the deal by saying that “the UAE is a sovereign state” and that he did not rule out future peace with Israel once the roots of the conflict between Beirut and Tel Aviv are settled.

In other statements, however, he said that he “did not call for peace with Israel” because of the continued Israeli occupation of Lebanese lands, as well as the unresolved issue of Palestinian refugees in Lebanon.

Lebanon and Israel effectively consider one another enemy states, particularly due to Israel's occupation of south Lebanon for 18 years, and the Israeli war with the Lebanese Hezbollah movement in 2006.

Should the country's leadership feel tempted to contemplate normalisation with Israel, they would, however, have to contend with further anger from an already incensed Lebanese public in the wake of a stark economic crisis compounded by the devastation wrought earlier this month by a double explosion in Beirut.

While Kuwait has not made an official statement about the deal, an unnamed official told local newspaper al-Qabas  that his country’s long-standing stance against normalisation remains unchanged.

“Our stance on Israel has not changed following the UAE normalisation agreement, and we will be the last to normalise relations,” the senior official was quoted as saying.

In response to the statements, Jared Kushner, senior advisor to the US president, criticised Kuwait’s stance as “not very constructive” and “a very radical view of the conflict in favour of the Palestinians”.

In the absence of an official statement, Kuwaiti non-governmental organisations and MPs have rejected normalisation. More than 30 NGOs described the agreement as “a dagger stuck in the Palestinian cause and in the back of Arab society”.

While the Algerian government has not yet issued an official statement, several political parties and civil society organisations have condemned the agreement.

The conservative Freedom and Justice Party dismissed the deal as a "betrayal" and a “crime” against the Palestinian cause.

Similarly, the National Liberation Front described it as "treason" and "a stab in the back" of Palestinians.

Algerians are widely viewed as some of the most staunch supporters of the Palestinian cause in the region.

Morocco has yet to officially comment on the deal, but Rabat is one of many governments in the region known to have not-so-secret dealings with Israel.

Earlier this year, Amnesty International revealed that Israeli spyware was used to target Moroccan activists. Meanwhile, Israeli media reported in February that Netanyahu had lobbied the United States to recognise Moroccan sovereignty over the disputed Western Sahara region in exchange for Rabat taking steps to normalise ties with Israel.

Meanwhile, Moroccan writers and scholars nominated for the Sheikh Zayed Book Award - scheduled to be held in the UAE early next year - have announced their withdrawal in protest against the normalisation agreement.