Al-Aqsa and Sheikh Jarrah: How is the world reacting to the situation in Jerusalem?

While Israel stands by its actions against Palestinians in Jerusalem, most countries have issued cautious statements 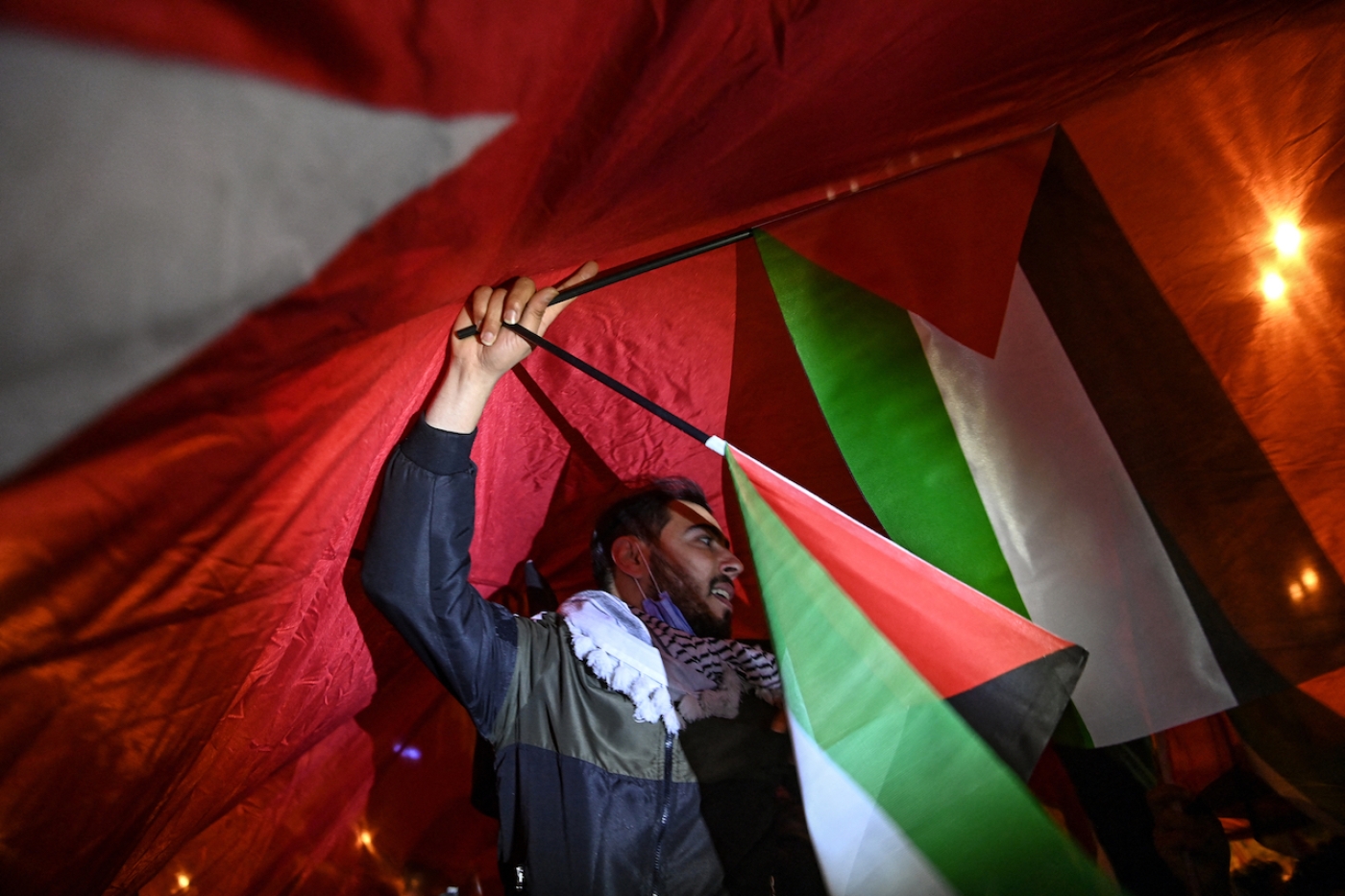 As tensions have soared over the planned eviction of at least 40 Palestinians from the neighbourhood of Sheikh Jarrah in occupied East Jerusalem, official reactions from around the world have varied from dismay and anger to silence.

Hundreds of Palestinians were reported wounded during an Israeli crackdown in al-Aqsa mosque on Monday morning, as far-right Israelis prepared to march through Jerusalem's Old City that afternoon to mark Jerusalem Day, celebrating Israel's occupation of East Jerusalem since 1967.

The scenes have taken place against the backdrop of Sheikh Jarrah residents' legal battle to stay in their homes. An Israeli lower court ruling earlier this year backed Israeli settlers' decades-old claim to the plots, despite the settlements and the forcible displacement of civilians violating international law.

Middle East Eye takes a look at how different governments and international bodies have addressed the situation so far.

Israeli Prime Minister Benjamin Netanyahu has doubled down on his country's position on the situation in Jerusalem, arguing that Palestinians were showing "intolerance".

"A struggle is now being waged for the heart of Jerusalem. It is not a new struggle. It is the struggle between intolerance and tolerance, between law-breaking violence and law and order," he said on Monday.

'A struggle is now being waged for the heart of Jerusalem'

The prime minister did not, however, address why Israeli armed police brutally raided al-Aqsa mosque while thousands of Palestinians were at prayer.

"We insist on ensuring the rights of everyone. This occasionally requires taking a strong stand as the officers of the Israel police, and our security forces, are doing at the moment. We back them in this just struggle," Netanyahu added.

"Of course, these things are being expressed erroneously and misleadingly in the global media. In the end, truth will win but we must constantly reiterate it."

On Monday, the office of Palestinian Authority (PA) President Mahmoud Abbas called the "brutal attacks" on Al-Aqsa Mosque "a new challenge to the international community”.

PA Prime Minister Mohammad Shtayyeh said: "We warn of the consequences of the occupation forces' incursions into Al-Aqsa Mosque.”

Meanwhile, Hamas leader Ismail Haniyeh said: "The resistance is ready and will not stand idly by unless the occupation retreats and ends its plans."

UN Secretary-General Antonio Guterres expressed his deep concern on Sunday evening over the violence in East Jerusalem and has urged Israel to cease demolitions and evictions, in line with its obligations under international humanitarian and international human rights law.

“Israeli authorities must exercise maximum restraint and respect the right to freedom of peaceful assembly.

"All leaders have a responsibility to act against extremists and to speak out against all acts of violence and incitement,” said Guterres in a statement via his spokesperson, urging that the status quo at the holy sites be upheld and respected

Meanwhile, envoys of the Middle East quartet from the European Union, Russia, the United States and the United Nations released a statement on Saturday, in which they said that they were also closely monitoring the situation and noted with “serious concern” the possible evictions of Palestinian families from homes they have lived in for generations.

The quartet's envoys reiterated their commitment to a negotiated two-state solution.

Leaders of both leading UK parties, Conservative Prime Minister Boris Johnson and Labour's Keir Starmer, have so far remained silent on the issue.

Claudia Webbe, a Labour Party MP, tweeted in support of the Palestinians, sharing a video showing the Israel incursion into Al-Aqsa Mosque on Friday.

Labour Shadow Foreign Secretary Lisa Nandy on Sunday also decried the "unacceptable" attack on worshippers at the mosque, adding that "it is essential that holy sites are respected”.

Nandy’s comment followed a petition set up over the weekend by the Labour Muslim Network, an advocacy group, that called on Nandy and Starmer to condemn the violence, receiving over 1,000 signatures within hours of being launched.

A statement from President Joe Biden's administration that equally blamed Israeli forces and Palestinians for a night of violence in Jerusalem has angered Palestinian activists, who say it amounted to a "blatant disregard" for Israeli abuses and "equalises the victim and the oppressor". The US State Department announced on Friday that there were "deep concerns" over the planned evictions and urged "both sides to exercise decisive leadership" after hundreds of Palestinians were injured when Israeli forces stormed the al-Aqsa Mosque complex.

US National Security Adviser Jake Sullivan later spoke with his Israeli counterpart Meir Ben-Shabbat late on Sunday, where he raised "serious concerns" over imminent evictions of Palestinians in Sheikh Jarrah and the violence that occurred over the weekend in Jerusalem.

While issuing concern regarding evictions in Sheikh Jarrah, Sullivan used far stronger language in response to the launching of rockets from the besieged Gaza Strip, saying it "is unacceptable and must be condemned”.

On Monday, the EU’s envoy to Palestine said that the bloc was “extremely concerned” by the spike in violence.

“We call for immediate calm. All must refrain from resorting to violence,” the EU mission said.

A statement released by the kingdom’s Ministry of Foreign Affairs on Saturday read: “Saudi Arabia rejects Israel’s plans and measures to evict dozens of Palestinians from their homes in Jerusalem and impose Israeli sovereignty over them."

Russia has denounced the attacks and urged both Israelis and Palestinians to refrain from violence.

“This development of events is perceived with deep concern in Moscow. We strongly condemn attacks against civilians,” the foreign ministry said in a statement on Saturday. “We call on all parties to refrain from any steps fraught with the escalation of violence.”

Iran has said that Israeli forces' actions at al-Aqsa amounted to a "war crime".

“This war crime once again proved to the world the criminal nature of the illegitimate Zionist regime,” he said, adding that Iran called on “the United Nations and other related international institutions to act on their definite duty to confront this war crime”.

“Shame on Israel and those who keep silent in the face of disgraceful attacks,” Turkish presidential spokesman Ibrahim Kalin said. “We call on everyone to stand up against the policies of occupation and aggression of this apartheid state.”

Several Turkish officials criticised Israel, calling on other countries to voice their condemnation, while the foreign ministry urged Israel to “immediately end its provocative and hostile stance and act with reason”.

Pakistan has denounced the “attacks on innocent worshippers in Al-Aqsa Mosque by Israeli occupation forces”.

“We pray for the speedy recovery of the injured, reiterate our steadfast support to the Palestinian cause and once again urge the international community to take prompt action to protect the Palestinian people,” said a statement by the foreign ministry on Saturday. 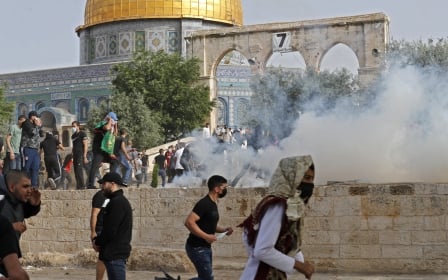