The Palestinian-minority city, a symbol for many, has been on edge after days of protest, fires, and the murder of a Palestinian protester 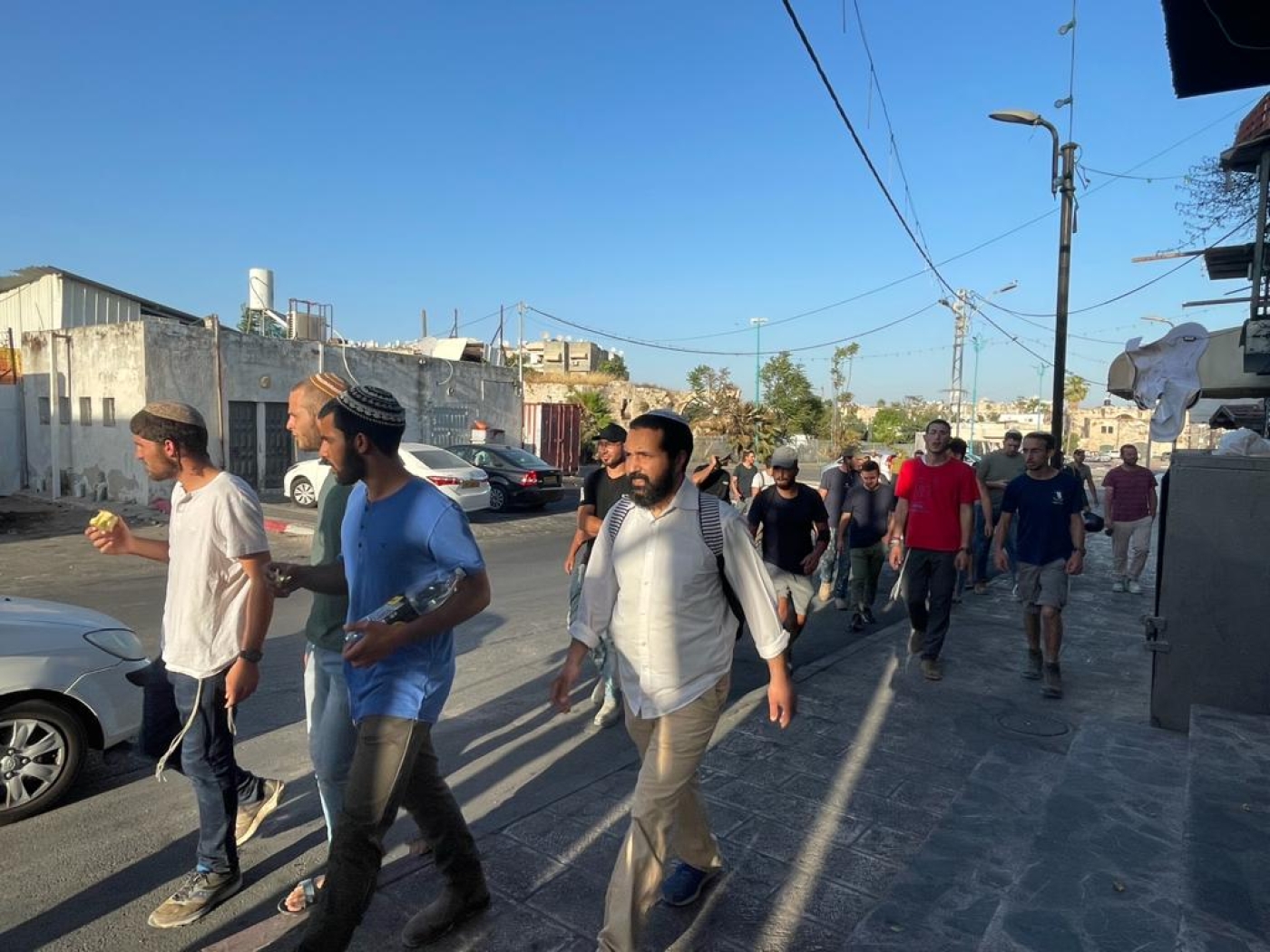 Israeli ultra-nationalists, some with weapons, patrol the streets of Lod with the city on edge. 12 May, 2021 (MEE/Lubna Marsawa)
By
Lubna Masarwa
, Frank Andrews
in
Lod

Israeli ultra-nationalists, some armed, roamed the streets of Lod on Wednesday, as mobs attacked a mosque in the city ahead of a newly announced night curfew.

The Palestinian-minority city just south of Tel Aviv has been on edge after days of protest, fires, and the murder of a Palestinian protester.

Lod, known as Lydd to Palestinians, has not caught much international attention during the rapid escalation of the past week, with rocket fire being exchanged between Israel and Gaza and heavy-handed crackdowns on worshippers and demonstrators in and around Jerusalem. But confrontations in the town erupted on Tuesday night between Palestinian residents of Israel and Jewish-Israelis, with cars and buildings burnt and at least one synagogue torched.

Israeli Prime Minister Benjamin Netanyahu visited Lod that night, after the city's mayor declared that it was in a state of "civil war".

Twenty-four hours earlier, a Palestinian man had been shot dead.

Following an earlier declaration of a state of emergency and scores of arrests in response to Palestinian protests, Israeli authorities imposed an overnight curfew in the city on Wednesday.

Israeli ultra-nationalists attacked the Great Omari Mosque of Lod that evening, with a desperate voice calling over the loudspeaker for locals to protect the building.

Videos from the city showed confrontations near the mosque, as inside people shouted and ran frantically.

MEE's correspondent in Lod earlier in the day described an atmosphere of heightened anxiety and tension.

She heard shooting and saw Israeli ultra-nationalists - some wearing t-shirts displaying army unit names - marching with Israeli flags, as young Palestinians gathered outside the mosque. The Palestinians said they suspected Israeli gangs were planning to attack it.

One young Israeli, a 21-year-old called Noam, told MEE that he had come to "settle in the houses of the people who left because they were scared of the Arabs", adding that "we gathered to walk around the city and show it's Jewish."

"I think the situation will change if we strongly deter them," he said, referring to the Palestinians. "When they get crazy like animals, to shoot one in the chest or in the head, just once is enough and it will be over. Someone who's throwing stones, and is trying to kill a Jew, he deserves a bullet in the head, and then things will calm down. Death is what deters."

"If they act like animals, shoot one in the head"

A young Israeli settler says death is the only thing that will deter Palestinians from protesting, after he and his friends drove to #Lod to protect Jewish houses following heated protests#Israel #Palestine pic.twitter.com/UJEcd66BBw

Walking the streets, MEE witnessed a heated argument between a Palestinian woman and an Israeli, and saw numerous burnt-out cars from the previous night.

MEE was warned that another night of violence was likely, despite the fact that Israeli police spokesman Micky Rosenfeld told us on Wednesday that "a strategic decision" had been made to enact a curfew between 8pm and 4am local time (5pm-1am GMT).

Hundreds of border police officers - 16 reserve units usually deployed in the occupied West Bank - have been mobilised in the area, Rosenfeld said.

It is the first time since 1966 that Israeli authorities have used emergency powers over a Palestinian community.

"Police call upon the public to be aware of the threat of the rocket attacks and to listen to all orders given when going into safe zones and safe areas," Rosenfeld continued, referring to Hamas rockets being launched from Gaza, part of ongoing rocket exchanges between Hamas and Israel that have killed 65 Palestinians, including 16 children.

Israeli authorities have so far confirmed five deaths as a result of the missiles fired from Gaza upon several Israeli cities, including Tel Aviv. Two of the deaths, a father and his teenage daughter, were Palestinian residents of Lod, according to the city's mayor.

A timeline of recent events

Protests broke out in Lod on Monday, as they did across Israel and the occupied Palestinian territories, against Israeli security forces' repeated storming of al-Aqsa Mosque and their attacks on worshippers and protesters in the Sheikh Jarrah neighbourhood and Bab al-Amud Square.

Hundreds of Palestinian citizens of Israel took to the streets of various cities including Nazareth, Haifa, Jaffa and Lod in solidarity with residents of Sheikh Jarrah in occupied East Jerusalem who face illegal eviction from their homes. pic.twitter.com/OoNSnntS4l

Then, late on Monday evening, a Palestinian man in the city was shot dead.

A video widely shared online showed him lying on the ground, surrounded by people calling for medical attention.

The Palestinian news website Arab48 cited local sources as saying the protester, named as Moussa Hassona, was shot by an Israeli ultra-nationalist, while the Israeli newspaper Haaretz blamed it on "armed Jewish residents defending against rioters". Israeli police confirmed the fatality without further explanation.

Arab48 cited a member of the popular committee in Lod, Tayseer Shaban, as saying Israeli nationalists fired indiscriminately on crowds of Palestinian demonstrators. He said the protesters "erupted peacefully in support of al-Aqsa, and were surprised by the bullets of the occupation and its settlers".

Israel's public security minister, Amir Ohana, wrote later on Twitter that whoever shot Hassona should not have been arrested and called for their release:

"The arrest of the shooter and his friends in Lod, who apparently acted in self-defence, is a terrible thing. Even if there are details the public isn't aware of yet, law-abiding citizens bearing arms increases the authorities' ability to prevent any threat or danger.

"Arrests and releases aren't for the minister to decide. If it were, they'd be released. The law enforcement system would do well to do that."

"The fact that, at the moment, they're under arrest is morally unjust and sends a bad message to anybody trying to defend themselves," he wrote on Wednesday morning, according to Haaretz. "The public security ministry and police must immediately assure the families besieged in their homes, for fear of the Arab rioters who should be brought to justice."

(The three Israeli suspects arrested after his murder were released on Thursday.)

After Hassona’s funeral on Tuesday, confrontations erupted again between Palestinian residents and Jewish-Israelis. Haaretz reported that, as well as cars and a synagogue being set on fire, a 56-year-old Jewish man was gravely injured.

Police sent reinforcements to the city on Wednesday morning, according to Haaretz.

One described the atmosphere in the city as "like a warzone", and another said Israeli ultra-nationalists had prevented him from going to Fajr prayer in the early morning, threatening to shoot him in the head.

National Police Commissioner Kobi Shabtai said of the ongoing violence: "We are seeing a situation in the mixed [Jewish-Arab] cities that we have never seen before, including the incidents of October 2000," a reference to the the early days of the Second Intifada, when a school was burned down in Lod, a Jewish-Israeli was shot, and a group tried to burn down a police station.

WATCH: A state of emergency has been declared in the Lod as fighting between Israelis and Palestinians grips the city a day after a Palestinian protester was killed by an Israeli settler.
Lod Mayor has begged the army to intervene saying the city had descended into 'civil war'. pic.twitter.com/mLy67rXBGs

The city's mayor, Yair Revivo, described the scenes as "Kristallnacht in Lod", according to the Times of Israel, a reference to pogroms carried out in Nazi Germany in 1938.

Israeli President Reuven Rivlin made similar comments on Wednesday, decrying the events as a "pogrom" carried out by "a bloodthirsty Arab mob".

Palestinians in the city told MEE that Revivo has a history of making incendiary, racist remarks.

MEE reported in 2017 that he stormed into a mosque in the city to stop it broadcasting the call to prayer and Eid al-Adha prayers through its speakers. Video footage of the incident showed Revivo, accompanied by Israeli police, entering the mosque in Lod and attempting to shut off the speakers.

For many Palestinians, the plight of Lod is emblematic of how they have fared under decades of Israeli occupation - so events there take on added significance. As part of the territory seized by Israel in 1948, tens of thousands of Palestinians were made to flee the city, never to return.

In 1947, as the British mandate drew to a close, the United Nations voted to partition Palestine into a Jewish and an Arab state, with Lydd forming part of the latter.

But in the ensuing 1948 Arab-Israeli war, Israel seized much of the proposed Arab state, including Lydd, nearby Ramleh, Jaffa, West Jerusalem and territories in the West Bank.

In the aftermath, in what Palestinians call the Nakba, or "catastrophe", 760,000 Palestinians were forcibly expelled from their homes, dispossessed of their property, and dispersed into refugee camps throughout the region, flipping the territories' demographics on their head. Seventy-eight percent of the land, including Lydd and Ramleh, came under Israeli control.

Yitzhak Rabin, who would later become Israel's prime minister, recounted his experiences as the area's military commander in 1948.

In a censored section of his memoirs, revealed in the New York Times, he remembered how Israel's first prime minister, David Ben Gurion, responded when asked what to do with the 50,000 surrendering Palestinians of Lydd and Ramleh - later to be reinvented as the Jewish towns of Lod and Ramle: "Ben Gurion waved his hand in a gesture that said: 'Drive them out!'"

In an influential article published in the New Yorker in 2013, Israeli commentator Ari Shavit admitted that hundreds of Lod's residents were massacred by Israeli soldiers and tens of thousands more driven out on a forced march to the West Bank.

Shavit concluded that the survival of Palestinian communities in the area was incompatible with the success of Israel as a Jewish state.

The proportion of Palestinians in the city slowly grew over the years - this city of 77,000 people now includes 47,000 Jewish-Israelis and 23,000 Palestinian residents of Israel, according to AFP. But Israeli authorities have for decades enacted policies to keep Palestinians as second-class citizens.

2/10 The reality of settler colonialism, of Judaising Palestine, is present in Lydda as much as in Shiekh Jarrah.

In 2004 Haaretz reported about a "settlement inside Lydda", referring to a group of West Bank religious settlers who moved to Lydda to prevent "Arab control" pic.twitter.com/FHStnt3D5D

In 2010, they erected a wall to separate Jewish and Palestinian neighbourhoods. In 2011, Human Rights Watch reported that 70 percent of Palestinian homes in the city had no legal status, a tactic authorities have repeatedly used to forcibly displace families and demolish their homes.

In comments cited by HRW, Eli Yishai, Israel's then-interior minister, said in 2011 that bringing another 50,000 Jews to Lod was "what will save and keep the city; I don't have another solution".

In 2015, +972 magazine cited Lod as an example of one of the many "mixed cities" in '48 territory whose Palestinian neighbourhoods had been "ghettoised". Occupation
Israel-Palestine: US sends diplomat to push for 'de-escalation'