The first official direct flight between Israel and the United Arab Emirates landed on Monday, ahead of a summit meant to cement an agreement earlier this month opening official diplomatic relations between the two countries.

The plane carried delegates from Israel and the United States, which brokered the deal, including Jared Kushner, a White House adviser and son-in-law of US President Donald Trump.

"While this is a historic flight, we hope that it will start an even more historic journey in the Middle East and beyond," Kushner said, before boarding the El Al aircraft at Ben Gurion airport near Tel Aviv.

"I prayed yesterday at the (Western) Wall that Muslims and Arabs throughout the world will be watching this flight, recognising that we are all children of God, and that the future does not have to be pre-determined by the past," he added. 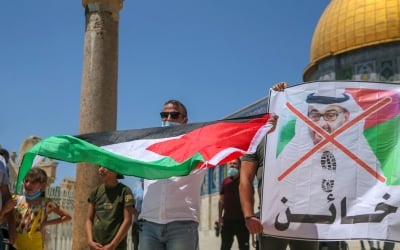 The joint delegation was welcomed on the tarmac by Emirati Minister of Foreign Affairs Anwar Gargash.

"While this peace was forged by its leaders, it is overwhelmingly desired by its people," Kushner claimed upon landing.

Officials are expected to explore bilateral cooperation in areas such as commerce and tourism on Monday. Israeli security envoys are due to visit the UAE separately.

Ben-Shabbat said the delegation's goal was to make a plan to push ahead relations in a broad range of areas.

"We came here to transform a vision into a reality. There are no limits to cooperation... in education, innovation, health, aviation, agriculture, energy and many other fields," he said in Abu Dhabi.

In apparently unrelated incidents, two blasts at restaurants in Abu Dhabi and Dubai killed three people earlier in the day in what authorities said were the result of gas malfunctions. The Abu Dhabi government told residents "to avoid spreading rumours" about the blasts, and "use official news sources".

News of the normalisation agreement between Israel and the Gulf state on 13 August has sparked controversy, denounced by Palestinians as tantamount to "treason" and effectively giving Israel the green light to continue its occupation and annexation of Palestinian lands unabated.

Kushner said Palestinians should not be "stuck in the past".

The Trump administration unveiled its full proposal for Israeli-Palestinian peace in January - although it was denounced by Palestinians and a good part of the international community for presenting a very lopsided plan granting Israel the vast majority of its demands, while only allocating disconnected pieces of land for the establishment of a Palestinian state with no sovereignty over its borders or airspace.

"It is very painful to see today the landing of an Israeli plane in the United Arab Emirates in a clear violation of the Arab stance on the Arab-Israeli conflict,” PA news agency Wafa quoted him as saying.

Hamas, the de facto ruling party in the besieged Gaza Strip, also condemned the UAE. The flight represented a "stab in the back of the Palestinian people, a prolonging of the occupation, and a betrayal of the resistance of the (Palestinian) people," the Palestinian movement said in a statement.

Peace is not an empty word used to normalize crimes and oppression. Peace is the outcome of justice. Peace is not made by denying Palestine’s right to exist and imposing an apartheid regime. Apartheid is what Netanyahu means by “peace for peace”.

US hopes for snowball effect

Saudi Arabia, which does not have official diplomatic relations with Israel, gave permission for the Boeing 737 from the Israeli flag carrier to fly over its territory en route to the UAE's capital of Abu Dhabi, a source familiar with the flight plan said.

However, it skirted the Gulf states of Qatar and Bahrain, which have declined so far to follow the UAE's move.

"This is the first time this has ever happened. I would like to thank the Kingdom of Saudi Arabia for making that possible," he said after landing.

Gulf Arab nations have had increasingly public ties with Israel in recent years, boosted by their shared rivalry with Iran and the advantages of linking their powerful economies.

But the UAE deal is the first Gulf country and only the third Arab state to establish formal ties with Israel. The other two Arab states, Egypt and Jordan, reached peace deals entailing the handover of land that Israel captured in the 1967 war.

While the Trump administration has repeatedly expressed its hopes that more Arab countries would come forward and normalise relations, Israeli officials have publicly mentioned Oman, Bahrain and Sudan as states likely to follow suit - although they have yet to do so.

Middle East Eye previously revealed that Saudi Arabia's Crown Prince Mohammed bin Salman had pulled out of a planned visit to Washington DC to meet Netanyahu after he feared that the news had leaked and that his presence in the US capital would become a "nightmare".

Sources told MEE that Trump and Kushner had been pushing for the meeting to happen in order to relaunch bin Salman's image as a young Arab peacemaker and shore up regional support for the deal between Israel and the UAE.

However, bin Salman’s father, King Salman, has maintained the stance that any peace agreement with Israel was contingent on a deal between Israel and the Palestinian leadership establishing a Palestinian state.

But the overflight was a concrete sign of Saudi cooperation with Israel after years of behind-the-scenes overtures.

Israel has denied reports that the accord hinges on the sale of US F-35 stealth fighter jets to the UAE, with Netanyahu saying he opposes a move that could reduce Israel's strategic edge in the region.

Kushner said Monday that the US could maintain that edge, "while also advancing our military relationship with the United Arab Emirates", and that the issue would be discussed further in "coming weeks and months".

Israeli officials hope the two-day trip will produce a date for a signing ceremony in Washington, perhaps as early as September, between Netanyahu and Abu Dhabi's Crown Prince Sheikh Mohammed bin Zayed al-Nahyan.

That could give Trump a foreign policy boost ahead of his re-election bid in November.

Hanan Ashrawi, a member of the PLO's executive committee, said Kushner and his team were "scrambling to convince as many Arab and Muslim leaders as possible" to attend a White House signing event and give Trump a boost ahead of the US presidential election on 3 November.

"They will be a prop at the backdrop of a meaningless spectacle for a ridiculous agreement that will not bring peace to the region," Ashrawi said last week.