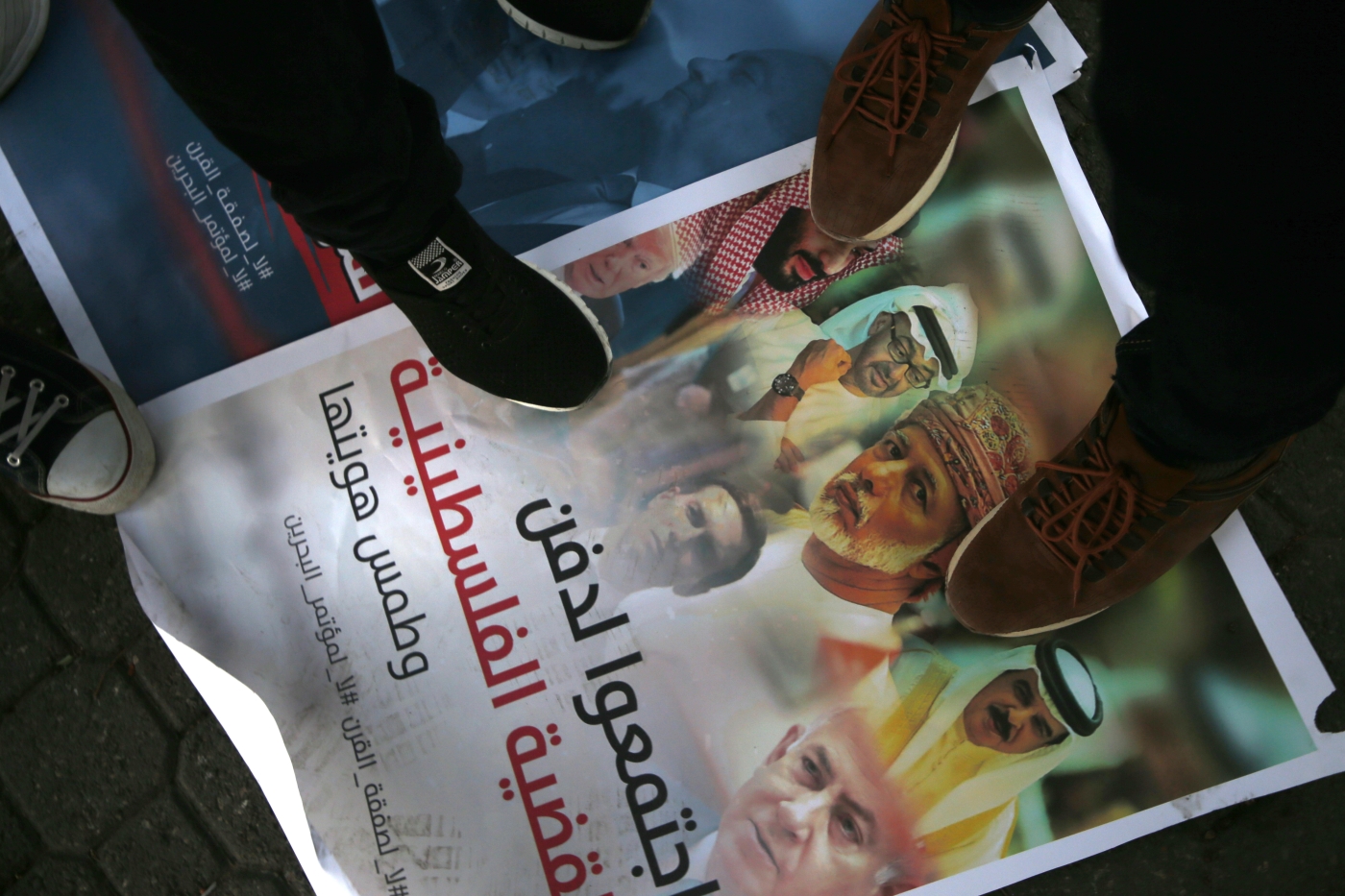 Palestinians step on a placard displaying pictures of Arab leaders, the Israeli prime minister and the US president and his son-in-law, during a protest in Gaza City on 24 June 2019 (AFP)

The recent US-brokered normalisation agreement between Israel and the United Arab Emirates, signed on 13 August, has been dubbed by Donald Trump "the Abraham Accord".

Trump declared on the occasion that "Emirati Muslims can now pray in the historic Al-Aqsa Mosque in Jerusalem, the third holiest site in Islam".

The invocation of Abraham and the issue of religion is hardly a Trumpian innovation.

Indeed, when former US President Jimmy Carter presided over that other US-brokered normalisation agreement between Israel and Egypt in 1978 and 1979, namely the Camp David Accords, signed by Anwar Sadat and Menachem Begin, Carter declared: "Let us now lay aside war. Let us now reward all the children of Abraham who hunger for a comprehensive peace in the Middle East. Let us now enjoy the adventure of becoming fully human, fully neighbours, even brothers and sisters."

At the 1993 signing of the Oslo Accords between the late Palestinian leader Yasser Arafat and then Israeli Prime Minister Yitzhak Rabin, US President Bill Clinton, presiding over the ceremony at the White House, declared: "For them we must realise the prophecy of Isaiah that the cry of violence shall no more be heard in your land, nor wrack nor ruin within your borders. The children of Abraham, the descendants of Isaac and Ishmael, have embarked together on a bold journey. Together today, with all our hearts and all our souls, we bid them shalom, salaam, peace."

However, at the 1994 US-brokered normalisation treaty between Israel and Jordan, Clinton did not re-invoke Abraham but he did stress that "at the dawn of this peace of a generation, in this ancient place we celebrate the history and the faith of Jordanians and Israelis”, and quoted the Qur’an and the Jewish Scriptures.

Clinton subcontracted the mention of Abraham this time to the late King Hussein, who declared in turn: "To remember this day as long as we live and for future generations of Jordanians, Israelis, Arabs, Palestinians, all children of Abraham."

When relations later soured between King Hussein and Israeli Prime Minister Benjamin Netanyahu in 1997, Hussein wrote him a letter to chastise him, in which he invoked Abraham yet again: "The saddest reality that has been dawning on me is that I do not find you by my side in working to fulfill God's will for the final reconciliation of all the descendants of the children of Abraham."

Much of this invocation of Abraham has to do with the relatively recent western Protestant and Orientalist invention of the term "Abrahamic religions", which is wrongly attributed to Muslims, to refer to the three monotheistic religions. While Abraham is of central importance to the Islamic tradition, the notion of Abrahamic "religions" or "adyan" in Arabic is foreign to it. The term is unknown in Arabic or Hebrew (except in translation from English).

The purpose of the invocation of Abraham is to pretend and to present the European Jewish colonial movement of Zionism, which sought to conquer Palestine and transform it into a Jewish settler-colony, as a Jewish religious quest not a European colonial one.

And that the resistance of the Palestinian people and other Arabs to this European colonisation was nothing short of religious strife between Muslims (often Palestinian Christians who were in the forefront of the fight against Zionism since its inception are forgotten) and Jews, when indeed the majority of Jews and Jewish organisations, and especially the two major Jewish denominations of Orthodox and Reform Judaism, opposed Zionism since its birth in the 1880s and 1890s until after World War Two.

Here we should be reminded that Zionist propaganda, which adopted the Protestant and antisemitic idea that European Jews are not European but are direct descendants of the ancient Palestinian Hebrews, and therefore that the colonisation by European Jews of the land of the Palestinians was nothing short of a "repatriation", and that the indigenous Palestinians are in fact the real colonists, is hardly an original argument.

A cover for Zionism

The white French colonial-settlers of Algeria also claimed that they were indigenous to Algeria, which their alleged Roman ancestors ruled, and that their colonisation of the country was simply an act of reclamation of the Roman Empire.

Indeed, the French writer and essayist Louis Bertrand saw the European colonists of Algeria "as a Latin melting pot that was taking up the heritage of the Roman Empire in North Africa. It was the recovery of a land that was rightfully theirs".

Abraham is invoked in these contexts as a cover for Zionist colonialism, to wrap this predatory colonial-settler movement with a religious halo and to represent the anti-colonial struggle of the indigenous Palestinians as a religious and fratricidal fight between "the children of Abraham".

That those Arab leaders who have committed to Zionism espouse the same language is hardly surprising, as the essence of endorsing Zionism is the agreement that its colonial nature be covered up so that any resistance to it would be presented as anti-Jewish prejudice, or indeed as against fraternal love mandated by the God of Abraham.

The Saudi, Bahraini and Emirati efforts in the last two decades to sponsor so-called interfaith "dialogues" and "tolerance" are an integral part of the strategy to rewrite the colonial history of Zionism as one of "religious conflict".

Let us set aside this attempt to legitimise Zionist settler-colonialism by recasting it as a religious and fraternal strife and consider the appeal to Abraham on its own terms.

Let us suppose that those imperial American leaders and the unelected Arab autocrats who appeal to Abraham in the context of the Palestinian Question aim to make an ecumenical move, of integrating religions in the region under the capacious umbrella of Abrahamic fraternity, hoping to provide a theme of unity in the midst of a conflict in which religion has tended to overlay the political aspects.

Setting aside for a moment this depoliticising move, which distracts from the colonial past and present in which the "conflict" lies and in which it is carried out, and avoids the whole question of justice and decolonisation for the Palestinians, the invocation of Abraham seems to falter on its own terms and not just because of this depoliticising effect.

For even if integrating, ecumenising appeals to unity among "religions" were not to distract from the political aspects of the conflict in this way, such appeals can only be meaningful if this presupposed unity among the religions that are allegedly in conflict are part of the lived life of quotidian practice, ritual, festival, custom, community.

In such a scenario, then appealing to these integrating factors may have the effect of demonstrating that the "conflict" between these "religions" is part of a false and trumped-up political manipulation and should be therefore abandoned. But in the appeal to Abraham, the opposite is true.

The lived reality of the colonial past and the colonial present is that of the deep ongoing and quotidian brutalisation of a people by another. In the case of Israeli Jews and Palestinians, there was/is no commonality of living outside the conquest of the land by European Jewish colonists, any more than there was in the lives of white and black South Africans during colonisation and apartheid.

As for the Arab-Jewish colonists, whatever memories still survive of a commonality of life between Arab-Jewish, Muslim and Christian neighbours in those Arab countries from which Arab Jews came, they are separated from and contrasted with the conquering relationship that Arab Jews, like their European counterparts, also have to indigenous Palestinians.

The appeal to Abraham in this colonial context is not therefore an appeal to a lived reality but an appeal to something fictitious and false, and which wants to indigenise the colonising Jews in Palestine, in which they arrived since the 1880s as colonial conquerors.

There have been multi-pronged attempts since the late 1930s to recast Zionist colonialism as not colonial at all: that Palestinian anti-Zionist resistance is no more than a "clash of nationalisms";  or that the two groups are "Semites" (a racist European category invented by European Christians in the late 18th century), engaged in an age-old struggle that goes back millennia. Or that what exists between the Zionist colonial settlers and the indigenous Palestinians is a mere "conflict", a term that would never be used to describe the Algerian or the Zimbabwean or Kenyan anti-colonial struggles, for example.

The invocation of Abraham is just the latest of these moves to rewrite the horrific colonial reality of Zionism and Israel in terms of religious and fraternal discord. Some Arab leaders may have accepted this, but the colonised Palestinians prove in their everyday resistance to the ongoing Zionist colonisation of their lands that neither the invocation of the name of Abraham nor that of any other prophet would ever convince them otherwise.