Elbit Systems: The Israeli arms company under fire from activists

Now that Elbit's Oldham factory has closed, pro-Palestinian activists are targeting the weapons manufacturer's other sites around the UK 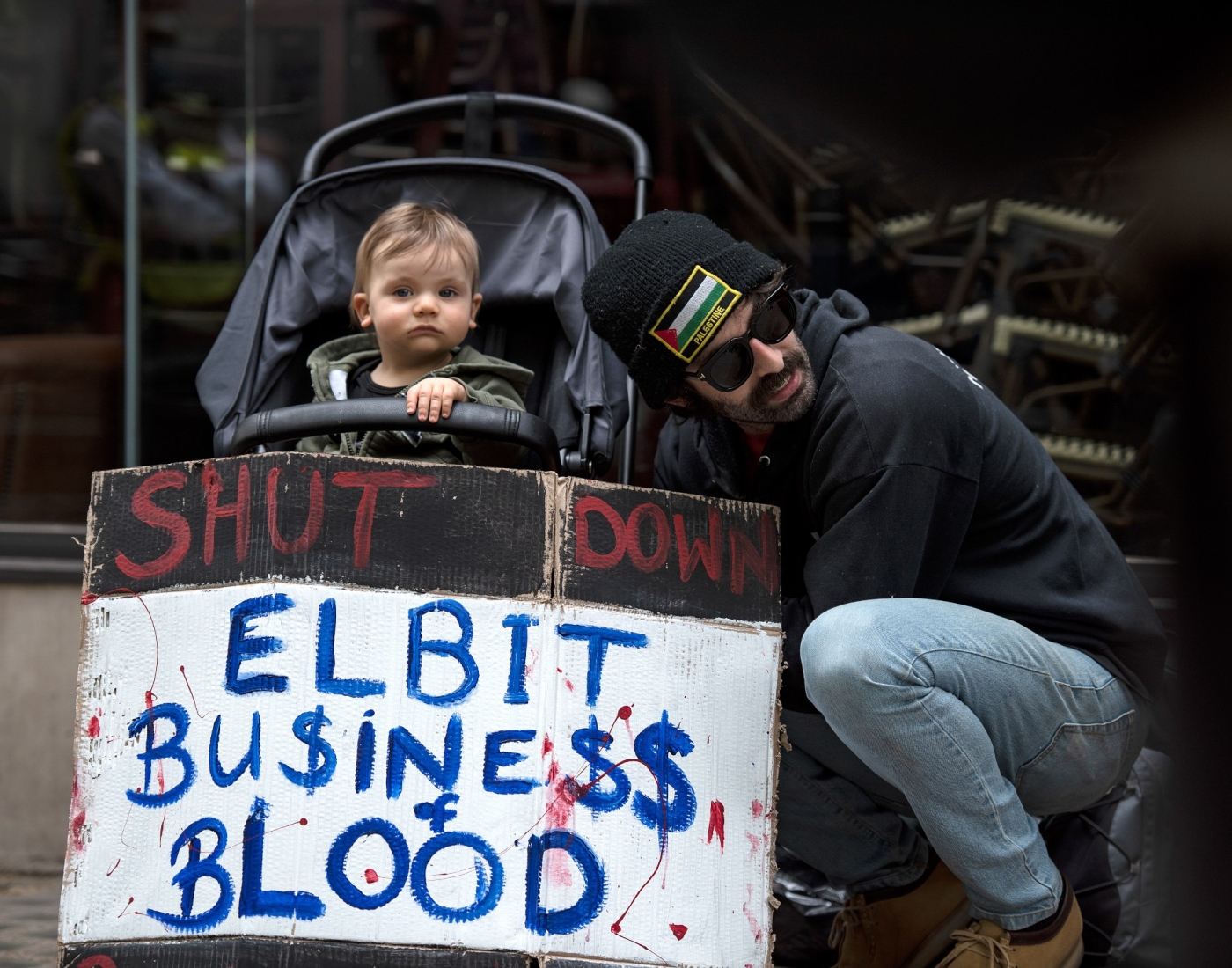 A protester with a placard during the Shut Elbit Down demonstration at Elbit's headquarters in London, 28 May 2021 (Reuters)
By
Shir Hever

Following an 18-month protest campaign by activists against the arms trade and for Palestinian rights, Israeli arms company Elbit Systems on Monday announced that it will vacate the Elbit Ferranti factory in Oldham, a town in northwest England.

Elbit insists the sale was part of a restructuring strategy in the United Kingdom, yet Palestine Action, which led the protests, claims that it is evidence that continued pressure on the company genuinely stung the prominent arms manufacturer.

“This is momentous news, brought about by the sustained actions of the Oldham community and pro-Palestine activists, who besides many British campaigners include Jews and Muslims, Israelis and Palestinians,” Andrew Feinstein, founding member of Shadow World Investigations and executive director of Corruption Watch, told Middle East Eye.

“It reflects that in Britain, as in many other countries, the Israeli war machine is not welcome. Celebrating campaigners have made clear they will continue their actions until Elbit, and all Israeli arms companies, no longer operate in the UK.”

'Campaigners have made clear they will continue their actions until Elbit, and all Israeli arms companies, no longer operate in the UK'

The privately owned Elbit Systems is the largest Israeli arms company. Ever since it split from Elbit Imaging in 1996 (the latter became a medical technology company), Elbit Systems pursued an aggressive acquisitions strategy in order to extend its ownership of arms supply chains and to gain a larger share of the global arms market.

This expansion strategy has been fuelled by debt, and low interest rates in recent years paved the way towards rapid growth for Elbit Systems. With every acquisition, raising additional credit for further purchases became easier.

The tipping point for Elbit Systems was the purchase of the government-owned Israeli Military Industries (IMI) in 2018, which granted it an 80 percent monopoly over sales to the Israeli land forces. This cemented the firm as the largest Israeli arms company and also turned Israel’s arms industry from mostly government owned to mostly privately owned.

Elbit Systems is known primarily for its military drones, specifically the Hermes, which have been used repeatedly in Israeli military operations in the Gaza Strip. The company also produces components for the illegal separation wall in the occupied West Bank. In addition, Elbit produces systems for so-called “sterile” security zones, artillery, and optical, targeting and navigation components, which can be installed into Nato-produced equipment, surveillance equipment and even cyber security products.

Elbit Systems chose a strategy of acquisitions in order to stand its ground against competition from much larger arms companies, mainly in the US, where it maintains an independent lobbying office. But the disadvantage of that approach is that it makes Elbit Systems the face of Israeli arms exports. Elbit buys companies in quick succession, and each new market that opens to the firm through a new acquisition means it is involved in another conflict.

According to the Database of Israeli Military and Security Export database on Israeli arms exports, Elbit Systems' products are deployed in Azerbaijan, Botswana, Brazil, Cameroon, Colombia, Ethiopia, Georgia, India, Mexico, Poland, Rwanda, Thailand, Zambia and elsewhere. Last year, Elbit signed one of the biggest contracts in its history: a $1.7bn, 20-year contract with Greece to upgrade the Greek air force. As the crisis in Kazakhstan unfolds, it is notable that Elbit Systems signed a contract to produce military drones for the Tokayev administration. 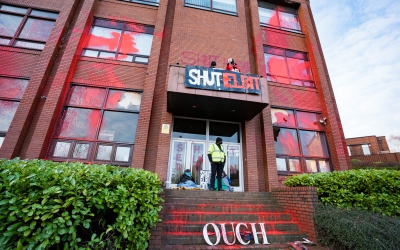 In the UK, Elbit purchased factories and subsidiaries to make it easier for British officials to award it contracts. Local politicians can boast that they are creating local jobs if some of the work is done in UK-based but Elbit-owned factories. In November, the company won a major training contract for the Royal Air Force, including training helicopters and light planes, simulators and computers.

However, Elbit has encountered strong resistance from anti-war and Palestinian solidarity groups in the UK. Activists have broken into its factories to break furniture, windows and machines, and bring production to a halt. The activists acted openly and waited for the police to arrest them. They claimed that their actions were intended to prevent the greater crimes for which the weapons produced by Elbit Systems are intended. Damage to the factory in Oldham has been estimated to cost more than £600,000.

Elbit Systems initially chose not to support charges, in order to avoid a court debate about alleged war crimes committed with the weapons it produces, but this only emboldened the activists to redouble their efforts. In December, Newcastle-under-Lyme magistrates court found a group of activists who targeted the factory - known as the “Elbit Three” - not guilty of criminal damage, boosting the hopes of activists throughout the UK who are facing charges.

Huda Ammori of Palestine Action told MEE: “The closure of the Oldham factory is a huge step forward for our movement. We've previously shut down drone factories for days or weeks at a time, but this is one drone factory which will never be reopening. Elbit still has nine sites across the UK, and we're going to keep going until these are all similarly forced out of our streets.”

If the protests indeed forced Elbit Systems to sell its Oldham factory, it is not just the loss of the factory itself and the profits it generates that hurts, but it is also a blow to Elbit’s expansion strategy. It creates a precedent that could slow down or even reverse the company’s growth trajectory and serve as a warning to the arms industry that selling weapons is a political act, and that arms companies could be held accountable for violations of human rights and international law committed using their products.

MEE asked Elbit whether it planned to shut any more of its UK sites, but had not responded by time of publication. 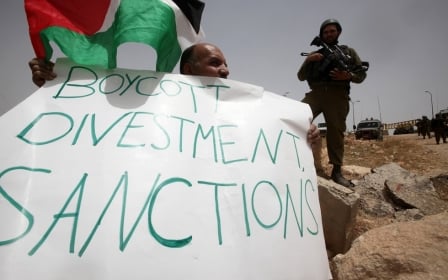 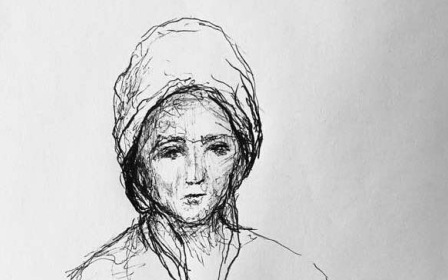 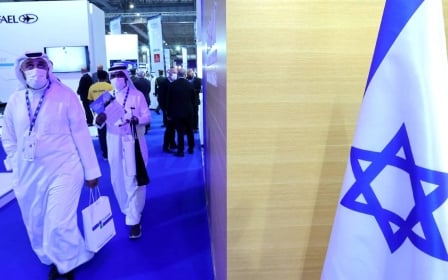