A dual Canadian-Israeli citizen has reportedly been captured by Islamic State (IS) militants in the flashpoint town of Kobane in northern Syria, after having gone to fight alongside Kurdish forces.

It emerged earlier this month that Gill Rosenberg, 31, had left Israel and was fighting with the Kurds after contacting the People’s Protection Units (YPG) through Facebook, according to an interview she gave to Israel Radio this month.

On Sunday, Israel’s Channel 2 reported that Rosenberg had been abducted by IS, citing Syrian jihadi websites.

Samoach al-Islam, a blog associated with IS, said a number of female fighters had been captured, including Rosenberg. It reported that IS militants carried out three suicide attacks against Kurdish forces on Saturday that killed an unknown number of fighters, while survivors were then taken captive.

Israeli officials have not confirmed the news but the Ministry of Foreign Affairs said it was investigating the reports and cautioned that the jihadi websites were “of dubious credibility”. Two Kurdish fighters who spoke to Israel Radio said they had not heard anything about Rosenberg's alleged capture and denied that she had been fighting in Kobane.

Kobane has been the focus of a fierce battle between Kurdish forces and IS militants and the subject of intense international media coverage, in part due to its close proximity to the Turkish border, from where journalists can observed the fighting.

When interviewed by Israel Radio on 10 November, Rosenberg explained her decision to join the Kurdish forces was motivated by humanitarian and ideological reasons. It was not clear in the course of the interview where Rosenberg was located at the time.

“They are our brothers,” she said. “They are good people. They love life, a lot like us, really.”

The Israelis and Kurds have had a positive relationship going back to the 1960s, involving military, intelligence and commercial contacts. Israeli leaders are said to have found common ground with the Kurds – who are fighting to establish their own state – borne out of a shared opposition to certain Arab states.

Rosenberg is the first foreign woman to join the Kurdish YPG, according to Ynet News. She moved to Israel in 2006 from Canada and served for two years in the Israeli army in the Home Front Command.

In 2009, she was arrested by the FBI in a joint operation with Israeli police and sentenced to four years in prison for her role in a mass fraud operation, according to a report in Haaretz. Eleven other Israelis were also arrested in the case, which involved the theft of up to $25mn from elderly US citizens through posing as fake lottery representatives.

After joining the YPG, Rosenburg posted photos to what appears to be her Facebook page, showing her baking bread with new Kurdish friends and others of her wearing an army uniform stamping on the IS flag.

If confirmed, Rosenberg would be the second Israeli citizen captured by IS militants. Steven Sotloff, a US-Israeli journalist, was executed by the group in early September, in a spate of videoed executions that have caused global outrage. 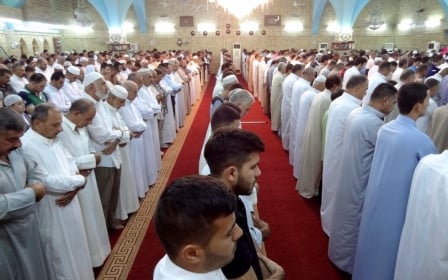