Israeli police recommend Netanyahu and his wife be charged with corruption In a statement on Sunday, the Israeli leader rejected the claims (Reuters)
By
MEE and agencies

Israeli police have said they have found evidence to recommend pursuing bribery and corruption charges against Prime Minister Benjamin Netanyahu and his wife.

Authorities claimed on Sunday that Netanyahu gave favourable contracts to Bezeq Telecom in exchange for better coverage of the prime minister and his wife on its news website.

The latest round of allegations comprise the third corruption case to be levelled against the Israeli leader.

The decision on whether to charge Netanyahu rests with Israel's attorney-general, who is still weighing whether to indict the prime minister in the other two cases.

Netanyahu has denied all charges of corruption, claiming "these recommendations were determined and leaked even before the investigations began".

In a statement on Sunday, the Israeli leader said that the allegations had no legal basis.

"I'm sure that in this case the relevant authorities, after examining the issue, will reach the same conclusion: that there was nothing because there is nothing," he said.

Police said there was evidence to charge Netanyahu with bribery, fraud, breach of trust and unlawful acceptance.

They also recommended his wife, Sara Netanyahu, face charges of bribery, fraud, breach of trust and obstruction of evidence.

In a joint statement with the Israel Securities Authority, police said they had also found sufficient evidence to charge Bezeq's controlling shareholder with bribery as well as other officials at the company.

"The main suspicion is that the prime minister took bribes and acted in a conflict of interest by intervening and making regulatory decision(s) that favour Shaul Elovitch and Bezeq, and in parallel demanded directly and indirectly to interfere with content of the Walla website in a way that would benefit him," the statement said.

The three cases involving the long-serving premier have led to speculation over whether he will eventually have to step down. 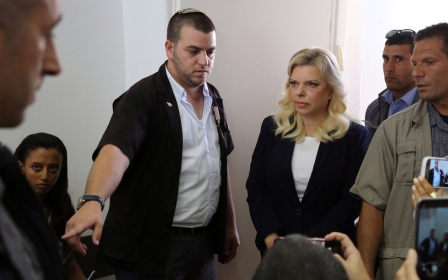