'Cut off and surrounded': Green light for new settlement 'serious blow' to Palestinians 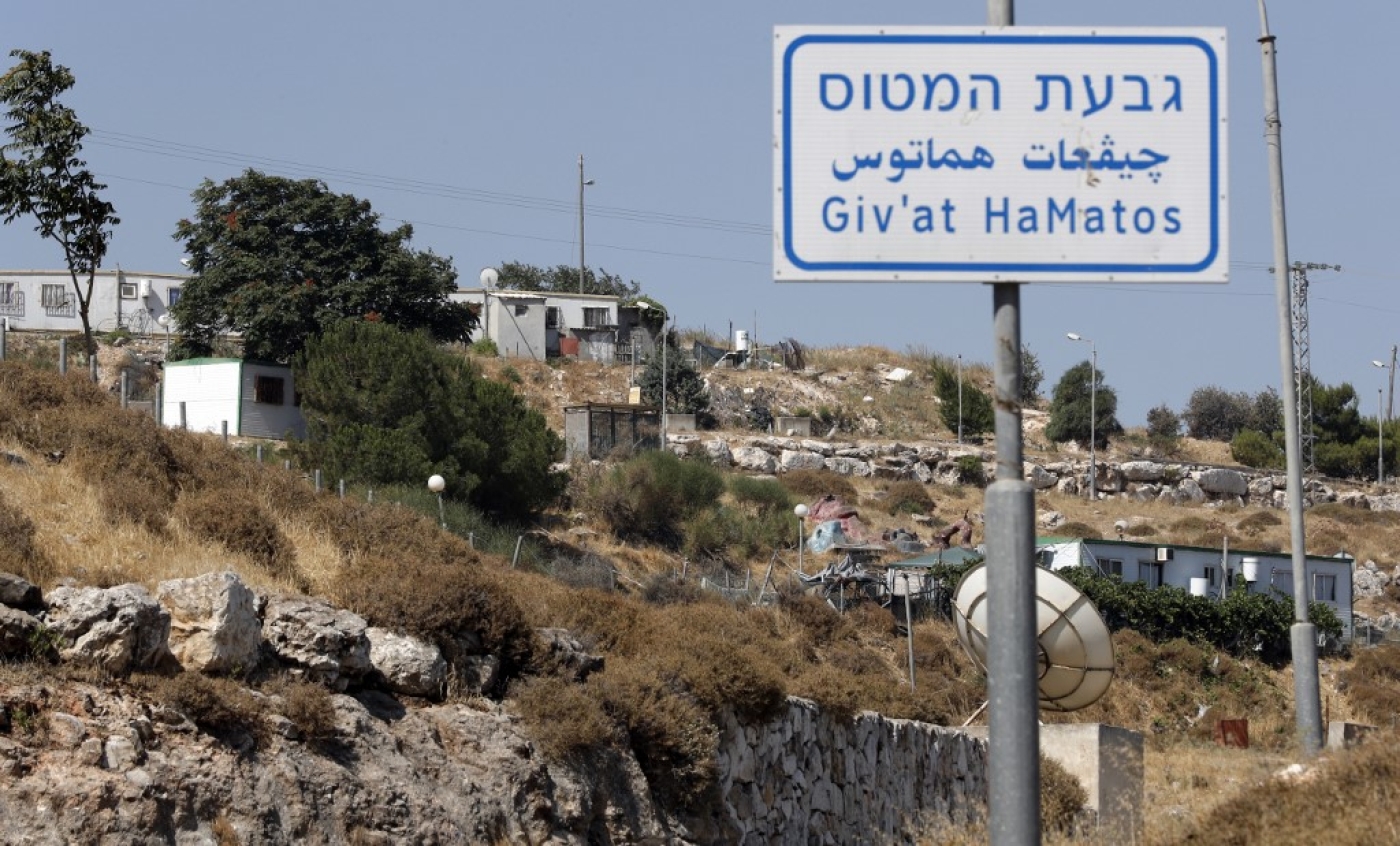 The Israeli government has ended a building freeze on some 2,610 illegal settlement units in occupied East Jerusalem, a move that would isolate two Palestinian-majority areas of East Jerusalem and curtail any chance at dividing the holy city in any future talks of a two-state solution to the Israeli occupation.

The village of Beit Safafa and the Sharafat neighbourhood, both located just north of the Palestinian city of Bethlehem in the occupied West Bank, were occupied by Israel in the 1967 Middle East war, and are now home to some 25,000 Palestinian residents of East Jerusalem.

In 2014, the Israeli government approved plans to build settlement housing units in an area dubbed Givat Hamatos, but during the administration of US President Barack Obama, the project was frozen.

Ethiopian- and Russian-Israeli Jewish settlers have since nonetheless settled in mobile homes in the 170-dunam (42 acres) area, which is served by Israeli public transport.

Israel’s Lands Authority and the Ministry of Housing began issuing tenders for 1,077 of the 2,610 housing units on Monday.

Residents of Beit Safafa and the Sharafat told Middle East Eye that they perceived Israeli Prime Minister Benjamin Netanyahu's announcement last week as being part of his election campaign ahead of 2 March legislative elections.

Mohammed Elayyan, the local leader of Beit Safafa, told MEE that residents objected to the project.

“We had a meeting to study the possibility of going to court. Beit Safafa is now cut off and surrounded. There is no land [for Palestinians] to build and getting a building permit is complicated,” Elayyan said.

He added that Netanyahu's vow to give "1,000 units for Arab residents of Beit Safafa" - referring to Palestinians - was merely a public relations move with no intention of following through.

“It is just part of his election campaign,” Elayyan said. “The rent for these housing units could reach $7,000 a month, and no Palestinian resident in Beit Safafa or Sharafat can afford such a hefty sum.

"Netanyahu is trying to legitimise his decision to build the settlement, that’s all.”

Last week, Netanyahu also announced that he planned to authorise the construction of some 3,500 homes for Jewish settlers in one of the most sensitive areas of the West Bank.

Netanyahu is facing a difficult election on 2 March that would decide his political survival. He is currently facing corruption charges for which he could face a maximum sentence of 10 years in prison if found guilty.

"Israeli settlements are swallowing Palestinian lands and depriving the people of Palestine of any means to free, dignified, and respectful lives… It articulates Israel's rejection of the right of Palestine and Palestinians to exist,” Palestine Liberation Organisation (PLO) Secretary-General Saeb Erekat said in a statement on 20 February.

He blamed the US administration of Donald Trump, which he said was “partnering with Israel, through the recently formed annexation committee”, with regards to recent Israeli moves to expand settlements that are illegal under international law.

"This is the last point enabling territorial continuity between Bethlehem and East Jerusalem," Peace Now said.

James Cleverly, the UK Minister for the Middle East and North Africa, said that “settlement construction in these highly sensitive areas undermines the viability of a future Palestinian state with its capital in East Jerusalem”.

Some Palestinians argue that continuous settlement construction for decades - and the Trump administration's strong backing of Israeli annexation policies - effectively ended the possibility of a viable Palestinian state alongside Israel a long time ago. For these critics, a one-state solution guaranteeing equal rights for all citizens remains the best alternative to put an end to the Israeli-Palestinian conflict.

Ziad Hammouri, the director of Al-Quds Centre for Social and Economic Rights, told MEE that Israeli settlement has not stopped since the 1993 Oslo Accords between Israel and the PLO.

“Most of the settlements built in Jerusalem are aimed to create contiguity between them… These settlement projects were decided and built while American leaders knew about it. But since Trump came to power, Israeli settlement activities have increased,” Hammouri said.

Elayyan said that the settlement housing units in Givat Hamatos would harm residents and prevent them from planning their future - consequences which he believes are part of Israeli efforts to push Palestinians out of East Jerusalem.

“Think about the next generation that wants to have families and have homes; there will be no land for them to do that, meaning that they will leave the town.”