Firefighters, police officers and forensics gathered in front of the offices of the French satirical newspaper Charlie Hebdo (AFP)
By
Peter Allen

PARIS - A young mother and cartoonist who survived the Charlie Hebdo massacre which claimed the lives of 12 people in Paris on Wednesday said she had let the suspected Al Qaeda killers into the newspaper’s offices.

Corrine Rey said she had returned from picking up her young daughter from a kindergarten when she was confronted by two heavily armed men wearing balaclavas.

“I had gone to pick up my daughter at day care, arriving in front of the magazine building, where two masked and armed men brutally threatened us,” said Ms Rey, who draws under the name ‘Coco’.

“They said they wanted to go up to the offices, so I tapped in the code,” said Ms Rey, referring to the digi-code security system on the interphone.

Ms Rey and her daughter hid under a desk, from where they saw two other cartoonists being executed.

“They shot Wolinski and Cabu,” she said, referring to the pseudonyms of two cartoonists. “It lasted five minutes. I had taken refuge under a desk.”

According to Charlie Hebdo’s lawyer, four cartoonists were killed by the masked gunmen: Cabu, Wolinski, Tignous and Charb, the pen name of Stephane Charbonnier, also the editor-in-chief at Charlie Hebdo.

Pierre de Cossette, an eye witness, said the men wore black cagoules and were heard to shout 'The Prophet has been avenged’.

Benoit Bringer, a journalist at the scene who works next door, took refuge on the roof of the building, which is in the 11th arrondissement of Paris.

“There were very many people in the building,” said Bringer

“We evacuated via the roof just next to the office. After around ten minutes we saw two heavily armed, masked men in the street.”

When shots rang out, it is thought that three policemen on bicycles were the first to respond before being repelled by the attackers.

“There was a loud gunfire and at least one explosion,” said another eye witness. “One police arrived there was a mass shoot-out. The men got away.”

Police and journalists were among those gunned down by two masked men brandishing Kalashnikovs burst into the Charlie Hebdo headquarters this morning.

Those executed also included four of the most famous cartoonists in France – men who had regularly satirised Islam.

The magazine’s editor in chief, Stephane Charbonnier, known as Charb, was also among those blasted to death by automatic gunfire. His killers were heard to shout: ‘The Prophet has been avenged.’

President Hollande was on the scene today, saying the worst terrorist atrocity in recent years this century was an unjustifiable attack on press freedom.

"We will look for those responsible," he said, adding that the entire nation was ‘profoundly saddened’ by what had happened.

Mr Hollande said there was no doubt it was a terror attack ‘of exceptional barbarity’ - and that ‘several terrorist attacks were thwarted in recent weeks’.

The offices of the same magazine were burnt down in a petrol attack in 2011 after running a magazine cover of the Prophet Mohammed as a cartoon character.

At the time, the editor-in-chief of the magazine, Stephane Charbonnier, said Islam could not be excluded from freedom of the press.

He said: ‘If we can poke fun at everything in France, if we can talk about anything in France apart from Islam or the consequences of Islamism, that is annoying.’

Mr Charbonnier, also known as Charb, said he did not see the attack on the magazine as the work of French Muslims, but of what he called ‘idiot extremists’

The cover showed Mohammad saying: ‘100 lashes if you are not dying of laughter’.

Inside, there was an editorial, attributed to the Prophet Muhammed, and more cartoons - one showing the Prophet with a clown's red nose.

Depiction of the Prophet is prohibited in Islam, but the magazine denied it was trying to be provocative.

The book is about a Muslim running France according to the laws of conservative Islam. 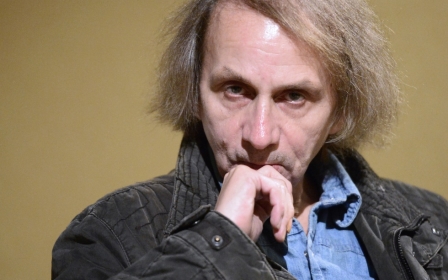