Teachers decry the forced retirement of 62 colleagues, and accuse the government of attempting to eliminate the union 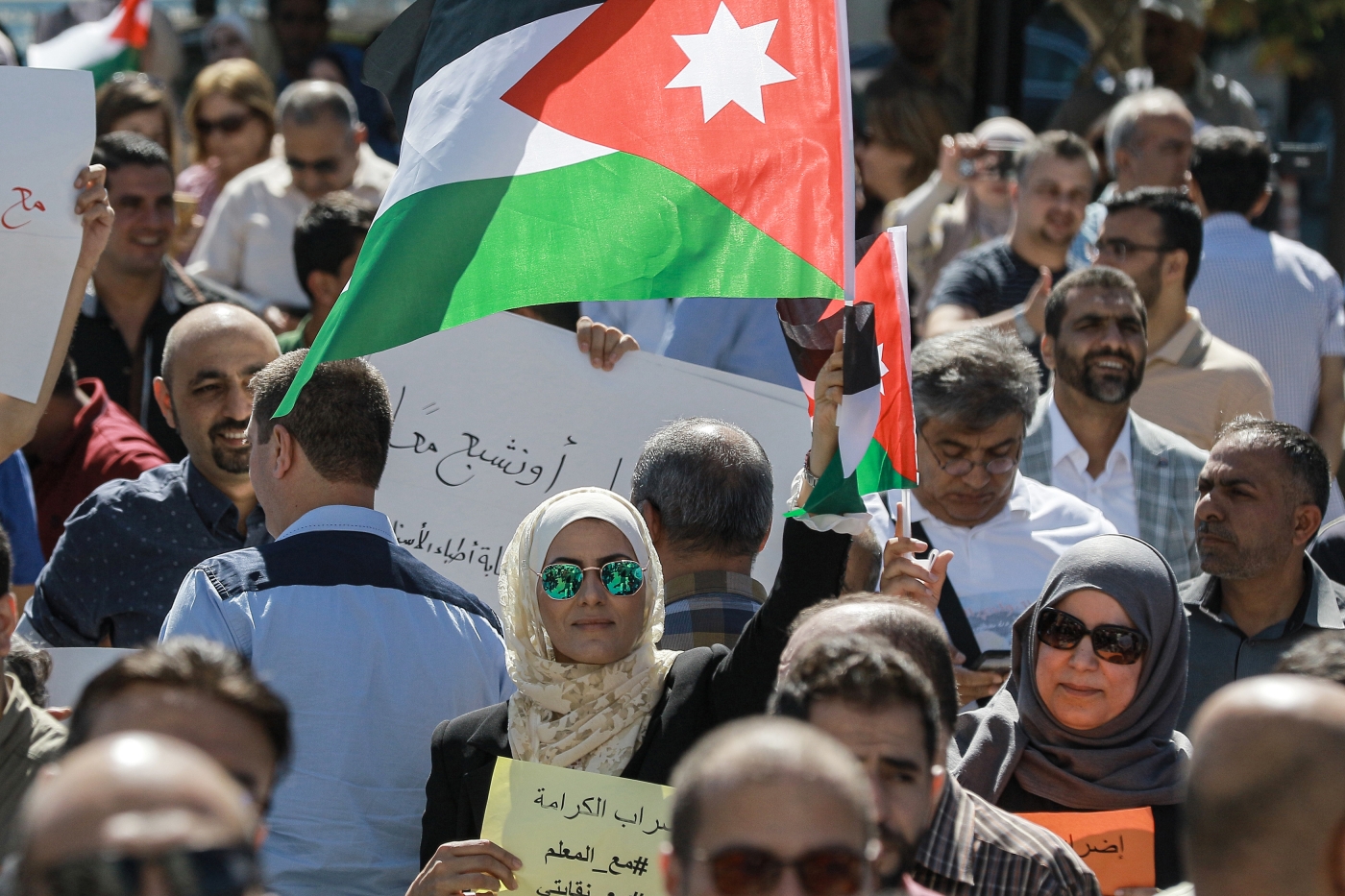 In the latest round of tensions, Jordanian security forces on Sunday broke up a congregation of angry teachers who had gathered in the capital Amman to protest the forced early retirement of 62 teachers, with union members threatening more action.

Despite tight security and the large contingent of Jordanian police, a big group of teachers managed to gather in the vicinity of the Jordanian parliament. Naser Nawasreh, the deputy head of the teachers’ union, and other teachers were arrested and later released.

Teachers chanted slogans in support of their union, whose work was suspended last year, and against what they called “the gang” and “thieves”, and demanded the right for their union to work freely.

Jordanian security forces had barricaded the roads leading to the Jordanian legislature. Last week, Amman placed a metal fence around an open area opposite the parliament in an attempt to prevent large gatherings. Days earlier, the open area in the Abdali neighbourhood had witnessed a large crowd of protesters demanding that the government abandons its attempts to dissolve the teachers' union.

Basel Hroub, the head of the legal committee in the teachers' union, told Middle East Eye that the call for the protests was made by teachers in different parts of the kingdom.

Teachers are demanding that the government rescind its decision to dissolve the union, cancel its early retirement decision, and uphold the settlement signed in October 2019 following a teachers' strike a month earlier.

War on the union

The conflict between the teachers and the government recurred after the local court in Amman ruled on 31 December to dissolve the union and detain the members of its executive committee for one year.

The committee is accused of wasting union funds on the account of its contribution to a government-organised fund helping those adversely affected by the coronavirus pandemic.

The union members who attended the court session were arrested but were later released on bail, their lawyer, Bassam Frehat, told MEE.

Amman’s Attorney General Hassan Abdallat decided on 25 July to dissolve the executive committee, suspend the work of the teachers' union and close down its offices for two years. Nawasreh said that since the 2019 teachers' strike - the longest in Jordan’s history - ended with a signed agreement with the government, authorities have not upheld 15 promises they had made.

The deputy head of the union accused the government of using the pandemic and related martial law to eliminate the union in an “unprecedented” way, despite the teachers’ long and difficult journey to create it.

“All consequent decisions of early retirements, arbitrary retirements, and transfers are politically motivated revenge actions that are unjustified,” he said.

“There are no clear criteria for who gets early retirement and who doesn’t. They appear to have applied the decision only on activist teachers despite many of them having outstanding academic records.”

Nawasreh threatened an escalation of protest activities in the coming period if the government does not respond to teachers’ demands.

“We will chain ourselves and go voluntarily to prisons from where we will announce the biggest hunger strike for all teachers in Jordan.”

Nawasrah wants the newly elected Jordanian parliament to monitor the actions of the executive branch, to force it to respect the constitution and ensure that the rule of law is applied to everyone.

The union leader said he hopes that parliament can play a role in de-escalating the current tensions.

“We don’t mind sitting with the government at a table and resolving this conflict.”

Meanwhile, the Ministry of Education said that early retirement would offer an opportunity for fresh recruits in the education sector.

“Retirement, in addition to early retirement and arbitrary retirement, are normal actions that are carried out according to the law with the sole aim of better management and to pump in new blood,” ministry spokesman Abdel Ghadour Quran told MEE.

“All ministries have implemented this process and it includes many government employees.”

Quran noted that if the person is a member of the general assembly board of the teachers' union or the executive committee it does not mean that he or she is immune from the laws and regulations as it pertains to retirement.

“The law applies to all without discrimination,” he said.

MP Yanal Freihat said parliament wants to do what is right in support of teachers and arbitrary retirement is an urgent issue that needs to be immediately resolved, while other problems need more time to settle.

“There is little doubt that the early retirement issue is aimed at activists in the union. We need to find out what are the criteria that were applied when choosing these particular teachers for early retirement,” Freihat told MEE.

“It clearly was not a coincidence. This issue touches on people’s livelihood. Some of the teachers who were making 700 Jordanian dinars [$990] are now bringing in only 100 dinars [$141]."