'Like a touristic trip': Lebanese unconvinced by Macron's Beirut encore

French president's latest visit has been met with a degree of cynicism, with some accusing him of staging a 'publicity stunt' 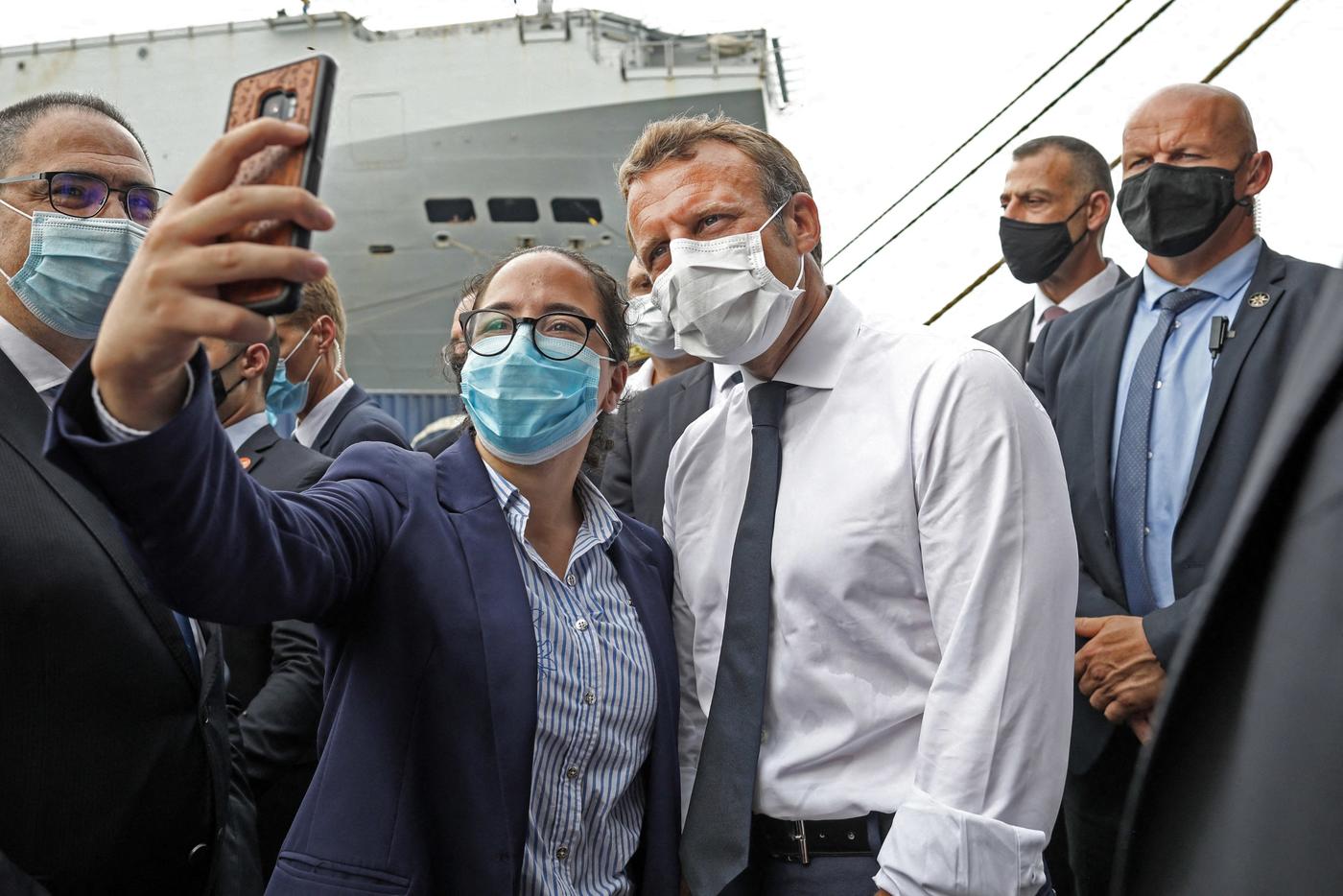 French President Emmanuel Macron arrived in Lebanon on Monday night for the second time in less than a month since the devastating 4 August explosion in Beirut's port.

Following a brief meeting with his Lebanese counterpart Michel Aoun at the airport, he headed over to meet the iconic and reclusive Lebanese singer Fairuz.

Protesters crowded around the Macron's convoy demonstrating against Prime Minister Mustapha Adib, who had been appointed only a few hours prior.

While Macron had been warmly greeted during his first visit by a crowd reeling from the immediate aftermath of the blast, many in Lebanon said they were watching his second visit on Tuesday with more wariness, as they question whether the French leader can - or even should - take on such a prominent role pushing for reform in the country.

Fred Bteich, a 29 year-old surgeon in Beirut, was on duty the night of the devastating explosion, when he and his colleagues worked at an under-capacity hospital throughout the night to treat some of the 6,000 people wounded by the blast.

During Macron's last visit on 6 August, he had promised the Lebanese people that he would stick up for the country’s youth and disgruntled population against its corrupt ruling class. When visiting demolished Gemmayze Street, the French premier told a distressed young woman, "I'm not here to help them [the politicians]. I'm here to help you!" before embracing her.

Bteich told Middle East Eye that while he had found Macron's first visit comforting, things were different this time around.

"I'm not as enthusiastic as I was for his last visit," he said, "but I'm still keeping my hopes up." 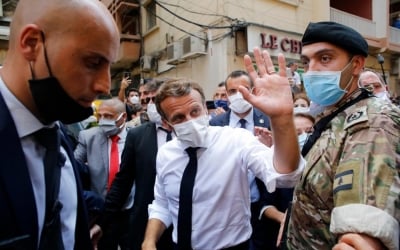 The surgeon felt let down after the vast majority of Lebanon's political class endorsed Adib as the new premier, a move that was widely welcomed by the international community.

His feelings were shared by fellow Lebanese.

Though "sceptical" of the French leader's intentions, Jad, who requested that his full name not be used, told MEE that he had appreciated Macron’s August visit, at a time when no Lebanese leader had dared come to the streets out of fear of public anger.

"When Macron visited the first time, I appreciated the fact that he embarrassed Lebanese politicians," said the audio engineer, whose small music studio, just a stone's throw away from the port, was completely demolished.

"He managed to walk amongst the ruins and the people while they [the Lebanese politicians] sheltered in their mansions."

Like Bteich, Jad does not see Adib as a step forward. "The new prime minister-designate is just a copy of the old one," he said with a sigh. "[It is] further perpetuating the establishment and their ironclad grip on our future."

The ostensible support of the international community - including France - for the nomination of a new PM has left many Lebanese afraid that Macron and other world leaders will back the new Lebanese government despite the current political class being largely seen as responsible for the country’s many woes.

Macron's visit this time around had a far more diplomatic mission. Following his visit with Fairuz and former Prime Minister Saad Hariri the night of his arrival, he planted a cedar tree at a cedar reserve in Jaj, northern Lebanon.

French and Lebanese flags were laid beside one another on a rock right by his side, and Macron embraced a young girl whose mother lost her life in the blast.

He also visited the Beirut Port, where he spoke to aid groups, and the Rafik Hariri University Hospital, the epicentre of the country’s Covid-19 pandemic response.

The country has seen the number of coronavirus cases soar in recent weeks, believed to have been worsened by the chaos in the wake of the explosion, the loss of thousands of homes, and the damage caused to numerous hospitals in the capital.

Perhaps the most tone-deaf moment of Macron's tour on Tuesday was an aerial show with jets flying in formation with plumes of smoke in the Lebanese flag's colours.

The loud noise from the aircraft, combined with red smoke reminiscent of the explosion, triggered trauma responses and caused undue stress among many residents of Beirut still reeling less than a month after the tragedy that destroyed a third of the city.

Bteich said he saw Macron's second visit as a "nice gesture", but felt it strayed away from urgent matters for the economically devastated country.

- Farah Saidoun, member of Citizens in a State

Lebanon is reeling from a crippling economic crisis that has left over 55 percent of its population living below the poverty line, while its local currency has devalued by roughly 80 percent in less than a year.

"Looks like a touristic trip," Bteich said with a shrug. "The last visit was promising, and he promised to help the people be represented, but now it’s not turning out to be the case."

Farah Saidoun, a member of independent political party Citizens in a State, dismissed both Macron visits as "publicity stunts".

"He definitely isn't just helping out of the kindness of his heart and is doing what serves his interest," the 25-year-old told MEE. "He has his own agenda and is trying to secure his place in Lebanon."

So what do Lebanese citizens think the French president should do instead to appease the country's struggling population?

"He should enforce accountability and ensure that this culture of impunity doesn't continue," Jad said. "We've all learned the hard way that you cannot run a country as if it were a dekkeneh [convenience store]."

Echoing Jad's sentiment, Bteich hoped that Macron would push for a Lebanese government that represents its people.

Macron continues to support a national unity government that would implement anti-corruption reforms and make the country’s economy viable again. But many Lebanese have little confidence in this ever happening so long as the status quo that got them into this mess in the first place is still in place.

The Elysee presidential palace in Paris had already announced a third trip to the Lebanese capital in December, and even Macron himself admitted he's taking a "risky bet" with Beirut.

"I'm not sure what his endgame is, but it doesn't look promising," Saidoun told MEE, adding that she'd never felt reassured by Macron's presence in the first place.

Given France's long colonial history in the country, many have looked at Macron’s recent forays with a degree of apprehension.

When asked what he ought to do instead, Saidoun smiled and said: "Not intervene in the first place." 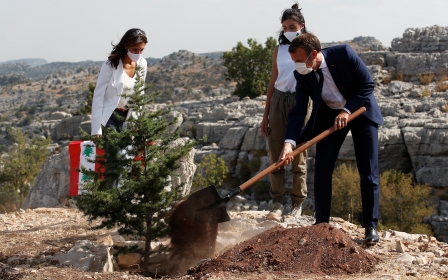 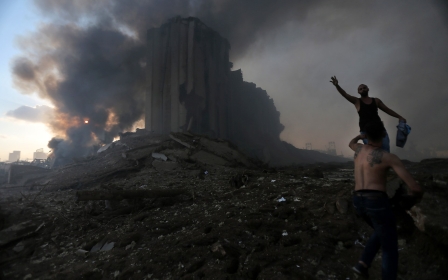 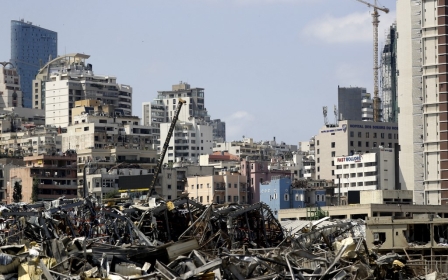