The US's long financial war on Hezbollah - and Lebanon

The United States has piled sanctions on the Lebanese movement, but to what effect? 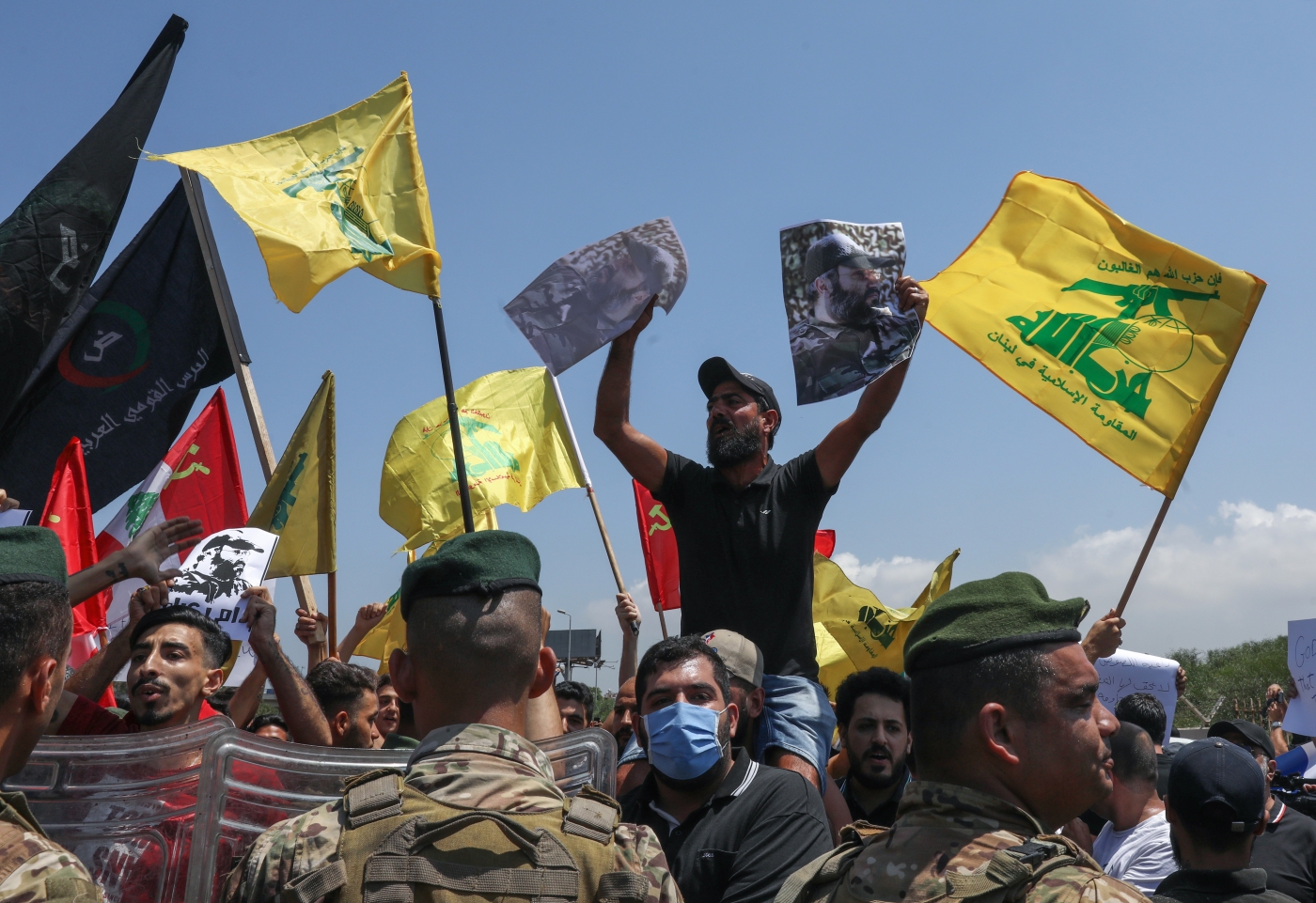 Supporters of Hezbollah and the Lebanese Communist Party demonstrate at the entrance of Beirut's international airport on 8 July 2020, to denounce the visit of the US Central Command chief to the country (AFP)
By
Paul Cochrane

Over the past two decades, Lebanon has been under close scrutiny from the US Treasury for potential money laundering or financing of US-designated terrorist organisations.

This has led to two banks shutting their doors, bans on the use of Paypal and other payment operators, headaches for ordinary Lebanese to make transfers, and lots of pressure on banks to comply with international standards. If US sanctions on Lebanon are about corruption, Saad Hariri should be top of list
Read More »

The reason for such scrutiny is straightforward.

“Lebanon is always under the spotlight because Hezbollah is in Lebanon,” said Wissam Fattouh, the secretary-general of the Union of Arab Banks to the UK publication Money Laundering Bulletin.

But in a first for the US Treasury, which has focused more on curbing Hezbollah’s financial operations over the years than going after corrupt Lebanese politicians, it sanctioned Gebran Bassil, former foreign minister and head of Free Patriotic Movement, which holds the biggest bloc in parliament, for corruption earlier in November.

The move has been widely considered as linked to Bassil’s ties to Hezbollah.

Such moves come amid the heightened use of sanctions by the US government against governments and political parties it opposes, from plans to intensify sanctions on Iran until President Donald Trump leaves office in January 2021, to sanctions against Syria, Venezuela, North Korea and China.

A new bill was proposed in September, the Hezbollah Money Laundering Prevention Act of 2020, “to stop the Iranian backed terrorist organization Hezbollah’s money laundering activities across the world, especially in Lebanon and Latin America.”

'Hezbollah proved that they operate on parallel channels of banking and finance, or parallel financial channels since they are out of the Lebanese banking sector'

The proposed act comes despite the international scope of the two former bills, and doubts around accusations of Hezbollah’s involvement in narcoterrorism in South America.

“HIPFA 2 widened the platform for accusations, in terms of targeting not just Hezbollah members but anyone who, knowingly or sometimes unknowingly, supports Hezbollah.

“Five years down the road, Hezbollah proved that they operate on parallel channels of banking and finance, or parallel financial channels since they are out of the Lebanese banking sector.”

A major US target

Hezbollah has been a core US target since the party was founded in the wake of the Israeli invasion of Lebanon in 1982.

The latest sanctioning of two members of Hezbollah’s Central Council came as, according to Secretary of State Michael Pompeo, “the US commemorates the 37th anniversary of Hezbollah’s heinous attack on the US Marine Corps Barracks in Beirut.”

Following the 11 September 2001 attacks on the US, anti-money laundering (AML) and countering the financing of terrorism (CFT) measures have been increasingly used by Washington in what has been termed as financial warfare. AML and CFT recommendations were beefed up following the 9/11 attacks, with the OECD’s Financial Action Task Force (FATF) setting the standards for financial institutions to follow or risk being cut off from the international banking system.

Tom Keatinge, the director of the Centre for Financial Crime and Security Studies at the RUSI think tank, described FATF in 2018 as “the most powerful  organisation most people will have never heard of”.

The closure of LCB caused Lebanese banks to become "paranoid" about repeated cases of being accused of money laundering, said one Lebanese banker on condition of anonymity.

Unlike banks elsewhere in the world that have been fingered by the US Treasury for violating AML and CFT regulations - from HSBC laundering money for Mexican drug cartels to Jordan’s Arab Bank, accused of funding Palestinian movement Hamas – the Lebanese bank was unable to pay a fine and return to business-as-usual.

The banker said that Lebanese banks were under such scrutiny that they would send predominantly Christian AML and CFT management to meet with US correspondent banks and the US Treasury to try and offset the impression of any sympathies towards Shia Muslims and Hezbollah.

Out of Lebanon’s 60 banks, just four are predominantly Shia-owned banks, the rest are Sunni and Christian owned, with a few banks connected to the Druze.

“The Shia faction of the bourgeoisie has not been really present in the banking system," said Joseph Daher, a lecturer at Lausanne University in Switzerland, and author of Hezbollah: Political Economy of the Party of God.

"Since the 1990s, the strength of the Shia bourgeoisie has increased in most associations but not the Association of Banks in Lebanon, where basically a Sunni faction has reached nearly the same level as the Christian faction, especially the Maronites.

'We are not concerned, as Hezbollah is out of the financial sector, and the lawsuits are far less complicated than the Arab Bank case, as they have a presence in the US, whereas Lebanese banks do not'

“We should also take into account that nearly all banks have important foreign shareholders, especially from the Gulf.”

Last year saw the largest Shia-owned bank, Jammal Trust Bank (JTB), disappear from the financial sector following similar charges to LCB, and sanctioned by the US for allegedly funding Hezbollah.

The move came following a lawsuit brought against 11 Lebanese banks, including JTB, in early 2019 by US law firm Osen, which represents over 350 families related to some 1,000 US soldiers killed or wounded by “Hezbollah-designed and Iranian-manufactured” explosive devices in Iraq.

That case is still ongoing.

“It could be like the Arab Bank case a few years back, [where we would] just pay a fine,” said the Lebanese banker, who works for one of the banks involved in the lawsuit

“We are not concerned, as Hezbollah is out of the financial sector, and the lawsuits are far less complicated than the Arab Bank case, as they have a presence in the US, whereas Lebanese banks do not.”

The US spotlight on Hezbollah has had severe knock-on effects for Shia Lebanese. Following HIFPA in 2015, the US provided Lebanese banks with 99 names whose accounts it wants closed. In response, Lebanese banks closed thousands of accounts as they bent over backwards to show they were in compliance with US diktats.

HIFPA 2 caused issues at a sovereign level, with Hezbollah members of parliament unable to be paid in US dollars. The solution was to pay in Lebanese lira. Smaller banks even considered stopping all transactions in dollars and just using lira, but Banque du Liban (BDL), the central bank, opposed such moves.

While Hezbollah has been squeezed out of the financial system, the other dominant Shia party, Amal, led by Parliament Speaker Nabih Berri, has not faced the same scrutiny from the US. Washington was reportedly considering measures against Berri and his inner circle for ties to Hezbollah and Iran in 2019, but nothing materialised.

It has long been puzzling why the US has seemingly overlooked Amal’s strategic relationship with Hezbollah. Amal acted as Hezbollah’s parliamentary voice when they were in the opposition (until 2005), and fought alongside Hezbollah in the July 2006 war against Israel.

Analysts suggest Amal has been treated as the non-terrorist designated wing of Hezbollah, with whom the US can diplomatically engage with, reflecting what had been the UK’s position on Hezbollah until February 2019, when it deemed both the political and military wings a terrorist organisation, and the European Union’s until 2013.

Hezbollah’s secretary general, Sayed Hassan Nasrallah, has admitted that the sanctions have impacted the party, but he also framed it as an attack on all Lebanese Shia – roughly a third of the population.

Other political parties, and the banks, have tried to use the US sanctions against Hezbollah, and the spotlight on the overall financial sector, as a reason for Lebanon’s economic and financial problems. 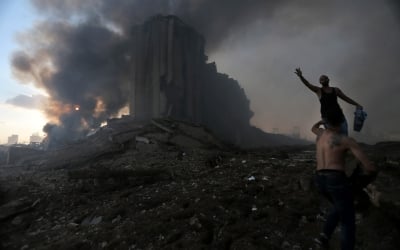 “Because of the instability of the region and the war in Syria, people have blamed Hezbollah for that. This is a problem as it’s not totally true, and it, secondly, strengthens Hezbollah narrative that everyone is against them,” said Daher.

The party has also been blamed for the financial crisis that has plagued Lebanon since October 2019, despite not being able to operate in the financial sector and not in government when the pound was pegged to the US dollar, or involved in the financial actions of BDL that contributed to the current crisis.

“Blaming the financial crisis on Hezbollah does not make sense. The main responsible actors go back to the 1990s, therefore to (the late Prime Minister Rafic) Hariri,” said Daher.

“But Hezbollah [does share] the responsibility, since 2005 (when it first joined the government), as it did not challenge these policies but participated. Hezbollah is basically defending the Lebanese sectarian neoliberal system.”

Hannes Baumann, a lecturer at the University of Liverpool and author of Citizen Hariri: Neoliberal politics in Lebanon, noted the same in the rise of the Hariri family, which is the dominant stakeholder in one of the country’s largest banks, BankMED.

“Is Hezbollah responsible for the financial collapse? Clearly only indirectly, if at all. But their programme of resistance (against Israel) does make Lebanon less attractive for investors, as if they think there could be a war with Israel, they are less likely to put money in,” said Baumann.

'You cannot say sanctions will affect business or the banking sector anymore, at least not as it had previously'

But with the banks having imposed informal capital controls since October 2019, preventing Lebanese from transferring money abroad and limiting domestic withdrawals, the US sanctions on Hezbollah are having minimal effect on the economy.

“You cannot say sanctions will affect business or the banking sector anymore, at least not as it had previously, because business has been down due to the October (2019) protests, the Covid-19 pandemic, and the 4 August explosion (at Beirut port) - the country’s economy and banking sector have collapsed,” said Paul Morcos, founder of Justicia Beirut Consult Law Offices.

With the recent sanctioning of Bassil, a new track could be starting against Lebanese politicians that will have a much wider impact than sanctions on Hezbollah.

“This should be done because you have a lot of politically exposed people who have laundered money, and especially in terms of corruption, they should be sanctioned internationally,” said Morcos.

“You cannot talk about corruption in Lebanon for the past three decades without having corrupt people. This is not possible.”