Malaysian police outside the federal court in Putrajaya, the location of Malaysia's federal government on 10 February (AFP)
By
MEE and agencies

Malaysia's parliament on Tuesday passed a tough anti-terrorism law meant to nip emerging signs of militancy in the bud, but which opponents denounced as a harsh blow for civil rights.

The Prevention of Terrorism Act allows authorities to detain terrorism suspects without charge. The political opposition as well as legal and rights groups had urged its withdrawal.

"It introduces long-term detention without trial, is open to abuse and is a grievous blow to democracy," opposition lawmaker N. Surendran said.

Authorities have expressed increasing alarm in the wake of the Islamic State (IS) group's extension into Syria, which police say has drawn dozens of recruits from Muslim-majority Malaysia.

On Monday, police said 17 people, including two who recently returned from Syria, were arrested on suspicion of plotting terror attacks in the capital Kuala Lumpur. No further details were given.

The legislation was passed after midnight, following a 15-hour debate, according to media reports.

Its passage was not in doubt due to the ruling government's majority in parliament.

The terrorism act has heightened worries in Malaysia over a deepening crackdown on civil liberties launched by the government in the wake of a 2013 election setback.

The ruling United Malays National Organisation (UMNO) has been in charge since 1957, but faces possible defeat at the hands of an opposition that has campaigned against government corruption and alleged abuse of power.

Dozens of government critics, including opposition politicians, academics, activists, and journalists, have been hit with sedition or other charges after criticising the government.

In particular, the terrorism legislation has revived concerns of a return to a previous draconian Internal Security Act (ISA) that allowed detention without trial - and was repeatedly used against opposition politicians.

The ISA was scrapped in 2012 amid public pressure for political reform.

"The passage of this law is a giant step backwards for human rights in Malaysia that fundamentally calls into question the government's commitment to basic rights that are critical to the rule of law in a functioning democracy," Human Rights Watch's deputy Asia director Phil Robertson said in a statement.

"Passage of this legislation raises serious concerns that Malaysia will return to practices of the past when government agents frequently used fear of indefinite detention to intimidate and silence outspoken critics."

The government did not immediately respond to a request for comment, but has said previously the law would not be used against anyone over their "political" views.

Police said in January they had arrested a total of 120 people with suspected IS links or sympathies, or who had sought to travel to Syria or Iraq.

They also said 67 Malaysians were known at the time to have gone abroad to join IS militants, and that five had died fighting for the movement.

Arrests over IS links

Abu Bakar said the plotters arrested on Sunday were believed to have been inspired by IS.

He said they also planned to rob banks to raise funds, and to raid armed forces' installations and police stations to obtain weapons.

Those arrested included a 49-year-old senior IS group member, who had undergone military training in Afghanistan in 1989 and in Indonesia in 2000, Khalid said.

"Seventeen people between the ages of 14 to 49 were arrested while they were holding a secret meeting to plan terror attacks in the (Kuala Lumpur area)," he said in a statement.

"The aim of this new terror group was to form an IS-like Islamic state in Malaysia.

"Their plan included the kidnapping of high-profile people."

Khalid did not provide details on whom the group was targeting, but in February, Zahid Hamidi, home minister in charge of internal security, warned that IS members in Malaysia had planned to kidnap tycoons and rob banks to finance terrorist activities.

The attacks were supposed to be carried out in the capital Kuala Lumpur and in nearby Putrajaya, the location of Malaysia's federal government apparatus.

But their campaign was thwarted after police raids in the capital and in the northern state of Kedah, said Khalid, who had announced the arrests on Monday without giving details.

The latest arrests bring to 92 the total number of people detained for suspected involvement in the IS militancy in Syria, Khalid added. 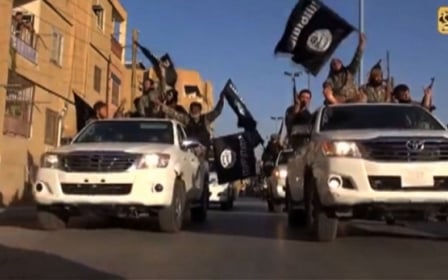