'Murdered on his own land': Palestinian village mourns father killed by settlers 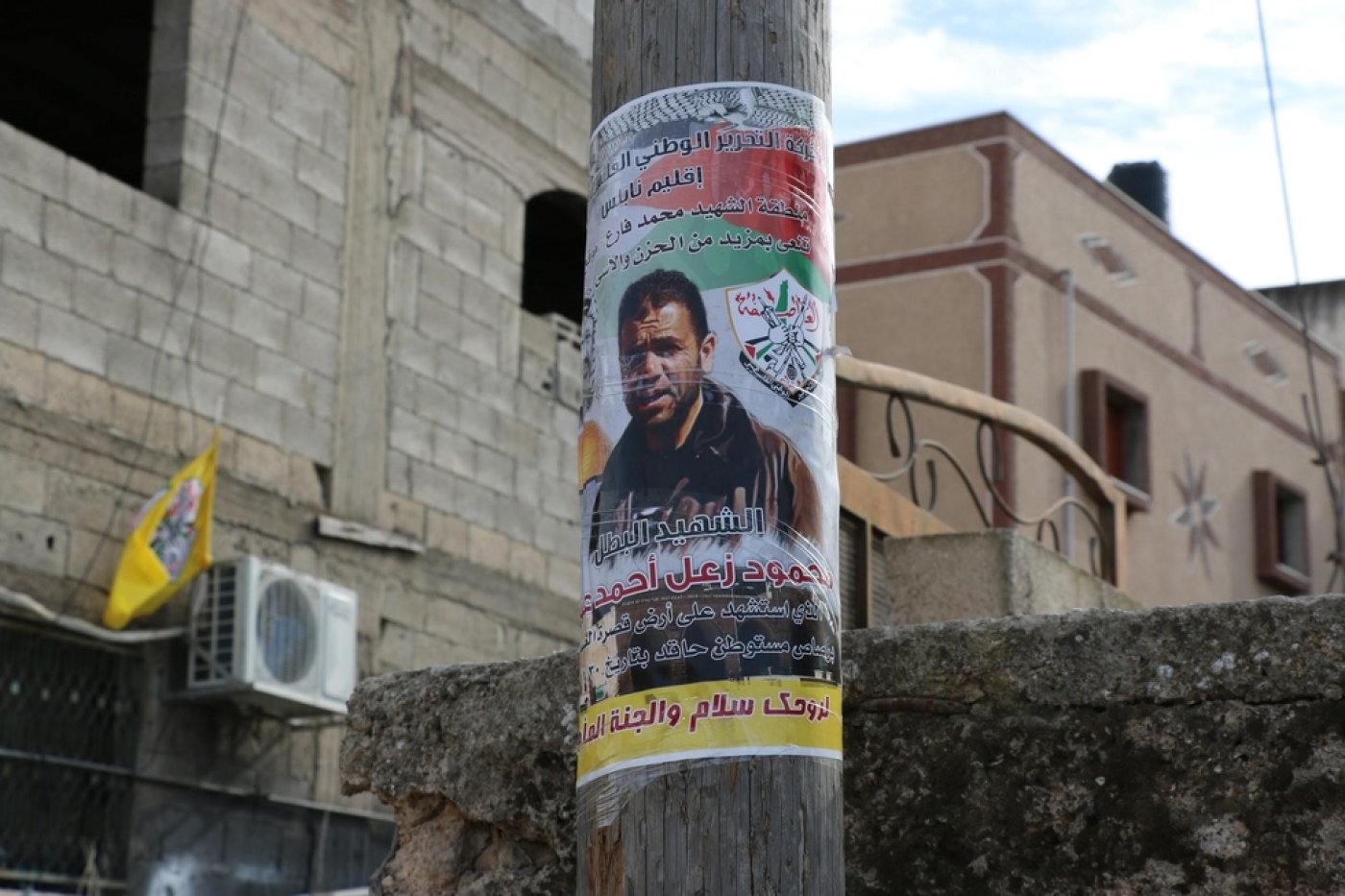 QUSRA, Occupied West Bank - Death is the price you pay when you have nothing but your body to defend your land, Amjad said matter of factly, recounting stories of Palestinians in his hometown of Qusra who have been injured or killed over the years as a result of attacks by Israeli settlers.

The latest to pay that price last Thursday was a loving husband and 48-year-old father of seven, who, according to his family, loved nothing more than to tend to this land.

Mahmoud Odeh, along with two of his sons, Awad, 22, and Abd al-Rahman, five, was doing just that when a group of Israelis from nearby illegal settlements came onto his farmland.

“He talked to one of the leaders of the group, saying they had no business on his land, and told them to leave,” Mahmoud’s younger brother Khalid told Middle East Eye.

When the settlers refused, a verbal dispute reportedly ensued, and moments later, one of the settlers drew his gun and fired one fatal shot into Mahmoud’s back, according to Khalid’s account.

“We still don’t know exactly what happened,” Khalid said. “The only person who can tell us is Awad, and he hasn’t spoken more than a few words since he saw his father die between his hands.”

Local Palestinian media outlets reported that Mahmoud was killed after he tried to defend himself against the group of settlers who “attacked” him.

An Israeli army spokesperson gave a different account of events.

“Early Thursday morning, 20 Israeli civilians were travelling near the village of Qusra, the spokesperson told MEE, when Palestinians threw rocks at the group.

In response, “one of the travellers fired towards the Palestinians and one was injured”, the spokesperson continued, adding that the group had then “entrenched themselves in a grotto”.

Shortly afterwards, Israeli soldiers arrived in the area to protect the settlers. The spokesperson said that the “incident” would be investigated by the army.

In Qusra, several villagers heard the sound of the gunfire and immediately ran to the area, to find Awad cradling Mahmoud’s bleeding body as five-year-old Abd al-Rahman stood in shock, watching as his father gasped his last breaths.

“Yes, we were not there to see exactly what happened,” Khalid said, choking back tears, “but what we do know to be true is that Mahmoud was a peaceful man. Ask anyone in the village, and they will tell you how kind, friendly, and pious he was.”

Amjad, a relative of the Odeh’s through marriage, and several relatives sat in the family living room, nodding in agreement.

‘We’ve been through this before’

Nestled between Nablus and Jericho, in the northern occupied West Bank, Qusra - home to some 7,000 Palestinians - is tucked away between rolling hilltops dotted with illegal Israeli settlements.

The main road to the village is quiet. Palestinian cars continue straight into the village, while Israelis living in the adjacent Migdalim settlement take a right to arrive to their homes, mere metres away.

The pavement, littered with ashes of burnt tyres, tear gas canisters, and stones, and the Israeli soldiers stationed in the nearby olive groves, are a tense reminder of a daily reality in Qusra in which deadly violence can break out at any moment.

'They cut down olive trees, cut our electricity lines, throw stones at us, attack our homes, and burn our mosques'

“There have been more than 180 settler attacks on the Palestinians in Qusra in the past six years alone,” Muhammad Jaber, the mayor of Qusra, told MEE.

“They cut down olive trees, cut our electricity lines, throw stones at us, attack our homes, and burn our mosques,” Jaber said, pointing out that the majority of the attacks take place in the winter time, when the residents of Qusra were less likely to be outside and on the lookout.

While the nearby Magdalim settlement, which was built on around 500 dunams (500,000 square metres) of the village’s land, has been around since the 70s, Qusra’s problems really began when ultra-right-wing settlers set up the Esh Kodesh settlement outpost on the outskirts of the village in 2000. In 2011, hundreds of settlers from Esh Kodesh and nearby outposts raided Qusra, attacking locals and destroying farmland, causing clashes to break out with Israeli soldiers, who had come to escort the settlers.

In the midst of it, 35-year old Issam Badran was shot and killed by a soldier. He was Mahmoud’s nephew.

“Issam died at the hands of the army, but it was because of the settlers,” Amjad said, “and now his uncle is dead because of those same settlers.”

He pointed to the bloodstained rocks where Mahmoud was killed, just on the edge of Qusra, overlooking the village of Duma where three members of the Dawabsheh family were killed when settlers set fire to their home in 2015.

“Neither Issam or Mahmoud were armed. They were using their bare hands to defend their lands, and they died for it.”

‘No one to protect us but ourselves’

The majority of Qusra’s land has been designated within areas B and C of the West Bank, where security affairs lie entirely under Israeli military control.

“The Palestinian Authority (PA) has no jurisdiction here,” Amjad said, “leaving us to fend for ourselves.”

The Palestinians in Qusra have been subject to violent attacks for years at the hands of settlers from Esh Kodesh, infamous for its ultra-nationalist, often violent residents.

In 2010, a year before Issam Badran was killed, a settler from Esh Kodesh kidnapped and beat a teenager from Qusra.

In 2013, a young man from Qusra was critically wounded after being shot by an Esh Kodesh settler, several Palestinian cars were torched, and attempts made by settlers to carry out so-called  “price tag attacks”, acts of violence against Palestinian targets or Israeli military in retaliation for any attempt to limit their settlement enterprise, were thwarted by locals from Qusra.

While a few Esh Kodesh settlers have been tried and charged in Israeli courts for such attacks, the residents of Qusra say there is a prevalent culture of impunity being fostered by Israeli army forces, who set up a military base a few years ago.

“The army serves to protect the settlers, no matter what,” Amjad said, “but when we try to defend ourselves, they fire tear gas, stun grenades, and live ammunition at us.”

Moments after Mahmoud was killed, another man from Qusra was shot and injured by Israeli forces who came to protect the settlers. Days later, the man’s son was critically injured during clashes with Israeli forces in the town.

“When the settlers kill someone, the soldiers protect them, and the courts rarely prosecute them. When Israel doesn’t punish the settlers, they are just giving them more permission to kill, destroy, and steal,” Amjad said.

The United Nations reported in August that after a three-year decline of settler attacks on Palestinians, the first half of 2017 showed a major increase in such attacks, with 89 incidents being documented so far this year, representing an 88 percent increase compared to 2016.

Israeli authorities served indictments in only 8.2 percent of cases of Israeli settlers committing anti-Palestinian crimes in the occupied West Bank in the past three years, according to Israeli NGO Yesh Din.

Despite the odds being stacked against them, Mahmoud’s family has vowed to take his case to court.

“My brother was murdered on his own land, in front of his children,” Khalid said, “we want justice.”

Adding insult to injury, Khalid told MEE that Israeli forces had delivered a notice to Mahmoud days before his killing to inform him that the Israeli government was planning on confiscating portions of his land for settlement expansion.

“He was supposed to appear in court on 18 December, but now I will go in his place,” Khalid said.

"Mahmoud loved this land with all his heart, not a day went by when he wasn’t taking care of it,” Khalid said.

"He fought for his land until his dying breath, and we will continue his fight with everything that we have."