Muslim ban: 5,000 academics sign petition to boycott conferences in US People hold signs with names of people detained and denied entry into US (Reuters/ Patrick T.Fallon)
By
Areeb Ullah

Thousands of academics from around the world have signed an open letter pledging to boycott international conferences held in the US after President Donald Trump banned individuals from seven Muslim-majority nations entering the country.

The ban, which came into force last Friday, prompted global condemnation and mass protests in major cities around the world as the Trump administration stood by its controversial immigration policy.

Individuals hailing from Iran, Iraq, Libya, Somalia, Sudan, Syria and Yemen who are citizens, dual nationals or born in those countries have been banned from entering the US for the next 120 days.

Green card holders from the banned countries are also included in the ban, while refugees from Iraq and Syria were banned indefinitely from entering the United States.

Having gained signatories from as far afield as Indonesia to India, the petition was signed by 5,000 academics calling for academics to boycott international conferences in the US till Trump repeals the ban.

Among the groups affected by the ban are students and academics who study and lecture in American universities.

The letter, which has garnered signatures from Indonesia to India, claims that Trump's controversial executive order "institutionalises racism, and fosters an environment in which people racialised as Muslim are vulnerable to ongoing and intensifying acts of violence and hatred."

It also said that individuals from the seven banned countries are now practically "trapped in the US, having cancelled planned travel for fear that they will be barred from returning".

Dr Nadine el-Enany, who lectures at the University of London and helped create the open letter along with academics impacted by the ban, told Middle East Eye that the letter was created to "be clear about their opposition to the ban...(and) not carry on with ‘business as usual’ at a time of emergency.

"It is an attempt to draw necessary attention to the urgency of the 'Muslim ban' and to generate conversation on the far-reaching consequences, not only for those who are nationals from the seven countries identified by Trump's executive order, but also for many others who are not from these countries but who are nonetheless being detained and harassed at the border," said el-Enany.

She also hit back at statements released by other American academic unions which failed to condemn Donald Trump's executive order outright.

The International Studies Association (ISA) which is a scholarly association with 6,500 members from around the world published guidance rather than condemn Trump's ban on Muslim scholars entering the United States.

The ISA after heavy pressure from academics who threatened to withdraw from its conference in Baltimore later subsequently released a statement explicitly condemning Trump's controversial executive order.

In its later statement, the ISA said:  "ISA strongly condemns any action by any government which prevents the free movement of scholars engaged in research on international affairs, or any other scholarly discipline."

In relation to the ISA's first statement, El-Enany said: "Professional academic organisations like ISA should be resisting this ban in the clearest of terms and doing everything in their power to support affected academics and students."

The boycott has however divided opinion within the academic community with some feeling engagement should take priority over boycotting conferences held in American institutions.

Imran Awan, who is an academic focusing on Islamaphobia, told MEE he refused to attend a conference in America following Trump's ban.

READ: Muslim travel ban: Why I refuse to go to America

Having sent his apologies to the conference organisers in America, Awan was sent a reply expressing sadness about his decision.

In the email, the organisers wrote: "If we are to overcome the mindset that led to these orders and policies, we will need to assemble the brightest mind we can find."

The organisers also said: "I think you can do far greater damage to these policies and others that limit the rights of people throughout the world by joining us than by staying home."

El-Enany responded to these criticisms by reiterating that the "boycott only applies to international academic conferences, not to activist organising events and other solidarity work and travel."

In a letter to students published on Sunday, Faust wrote that the new travel restrictions "are already posing barriers to scholars and students" trying to enter the US while deterring others from travelling abroad because they are "fearful about their ability to return," she wrote.

At least two people from Harvard have already been blocked from returning to the US, the Harvard Crimson reported.

Iranian engineering students have also faced heavy restrictions whilst studying in the US after sanctions imposed on Iran because of its nuclear programme prevented them from studying subjects related to nuclear power. 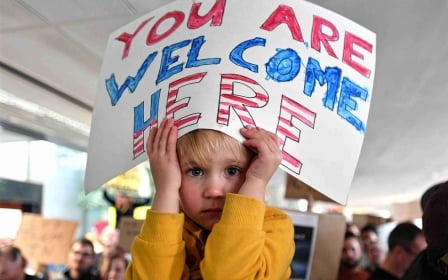