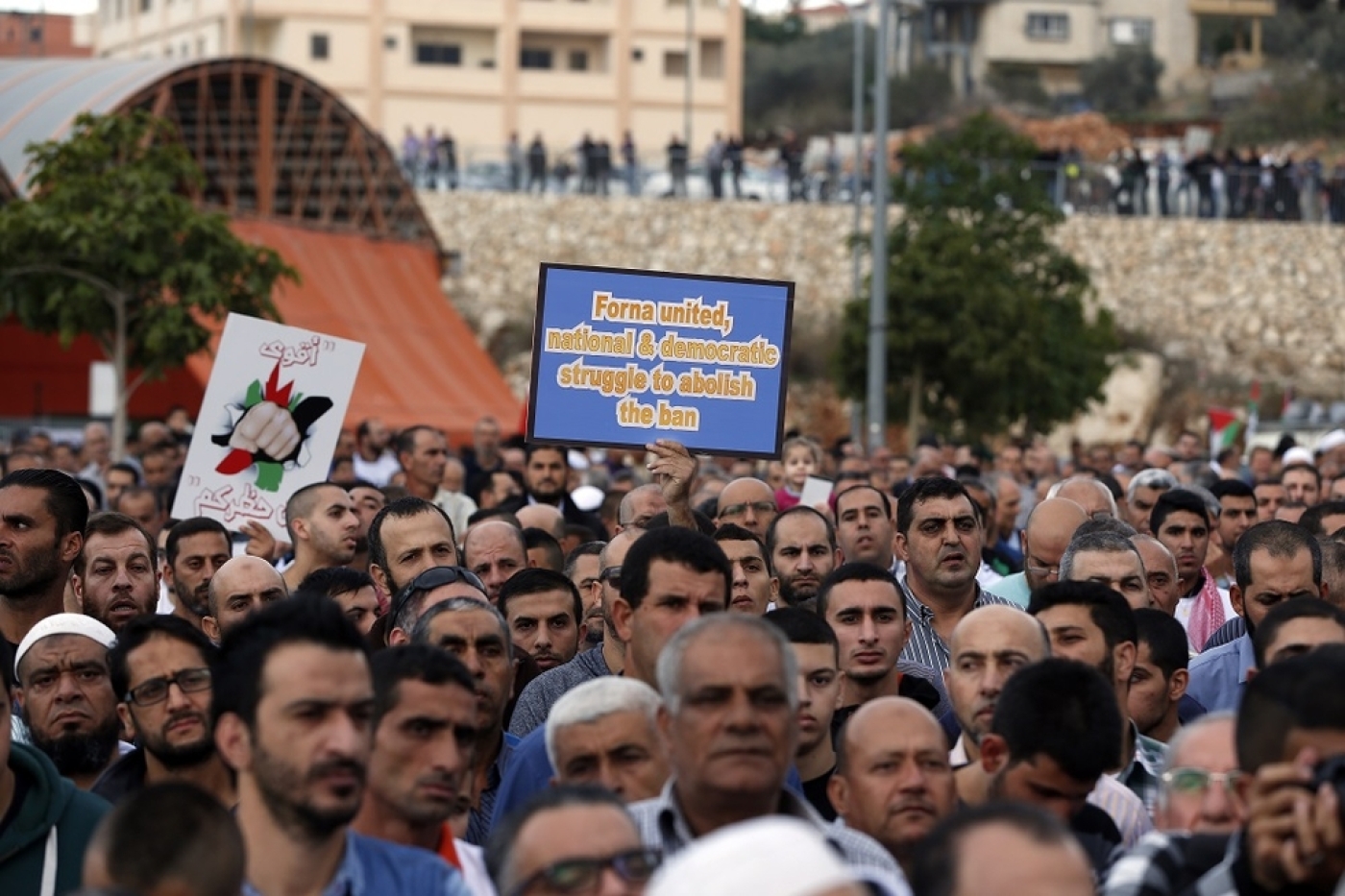 UMM AL-FAHM, Palestine - Israel's crackdown on access to Al-Aqsa Mosque compound after two Israeli policemen were killed there last month provoked an eruption of fury among Palestinians in occupied Jerusalem and rocked Israel's relations with the Arab world.

Three weeks on, the metal detectors and security cameras have gone and, for now at least, Jerusalem is calmer.

But the shockwaves are still reverberating and are being felt most keenly far away in northern Israel, in the town of Umm al-Fahm. The three young men who carried out the shootings were from the town's large Jabareen clan. They were killed on the spot by police.

Umm al-Fahm, one of the largest communities of Israel's 1.7 million Palestinian citizens, a fifth of the population, had already gained a reputation among the Jewish majority for political and religious extremism and anti-Israel sentiment.

In large part, that reflected its status as the home of the northern branch of the Islamic Movement, led by Sheikh Raed Salah.

In late 2015, Israel's prime minister, Benjamin Netanyahu, outlawed the movement as a "terrorist" organisation, despite his intelligence agencies failing to find evidence to support such a conclusion.

More likely, Netanyahu's antipathy towards Salah's group and Umm al-Fahm, derives from its trenchant efforts to ensure the strongest possible presence of Muslims at Al-Aqsa.

As Israel imposed ever tighter restrictions on Palestinians from the occupied territories reaching the mosque, Salah organised regular coaches to bring residents to the compound from Umm al-Fahm and surrounding communities.

Nonetheless, the three youths' attack at Al-Aqsa last month has served to bolster suspicions that Umm al-Fahm is a hotbed of radicalism and potential terrorism.

That impression was reinforced last week when the Israeli authorities belatedly handed over the three bodies, at judicial insistence, for burial.

Although Israel wanted the funerals as low-key as possible, thousands attended the burials.

Moshe Arens, a former minister from Netanyahu's Likud party, expressed a common sentiment this week: "The gunmen evidently had the support of many in Umm al-Fahm, and others seem prepared to follow in their footsteps."

#NOW #VIDEO The funeral of the three martyrs in Umm al-Fahm who carried out Al-Aqsa operation pic.twitter.com/mVlFzwD7EN

Yousef Jabareen, a member of the Israeli parliament who is himself from Umm al-Fahm, said such accusations were unfair.

"People in the town were angry that the bodies had been kept from burial in violation of Muslim custom for two weeks," he told Middle East Eye.

"There are just a few extended families here, so many people wanted to show solidarity with their relatives, even though they reject the use [of] violence in our struggle for our civil rights."

Nonetheless, the backlash from Netanyahu was not long in coming.

In a leak to Israeli television, his office said he had proposed to the Donald Trump administration in Washington ridding Israel of a region known as the "Triangle," which includes some 300,000 Palestinians citizens. Umm al-Fahm is its main city.

The Triangle is a sliver of Israeli territory, densely packed with Palestinian citizens of Israel, bordering the north-west corner of the occupied West Bank.

As part of a future peace deal, Netanyahu reportedly told the Americans during a meeting in late June, Umm al-Fahm and its neighbouring communities would be transferred to a future Palestinian state.

In effect, Netanyahu was making public his adoption of the long-standing and highly controversial plan of his far-right defence minister, Avigdor Lieberman.

This would see borders redrawn to allow Israel to annex coveted settlements in the West Bank in exchange for stripping hundreds of thousands of Palestinians of their Israeli citizenship and reassigning their communities to a highly circumscribed Palestinian state.

Jamal Zahalka, another member of the parliament, from Kafr Kara in the Triangle, said Netanyahu was supporting a double crime.

"He wins twice over," he told Middle East Eye. "He gets to annex the illegal settlements to Israel, while he also gets rid of Arab citizens he believes are a threat to his demographic majority."

Lieberman lost no time in congratulating Netanyahu for adopting his idea, tweeting: "Mr Prime Minister, welcome to the club."

With his leak, Netanyahu has given official backing to an aspiration that appears to be secretly harboured by many Israeli politicians and one that, behind the scenes, they have been pushing increasingly hard with Washington and the leadership of the Palestinian Authority.

A poll last year showed that nearly half of Israeli Jews want Palestinians expelled from Israel.

With Netanyahu now publicly on board, it looks suspiciously like Lieberman's role over many years has been to bring into the mainstream a policy the liberal Haaretz newspaper has compared to "ethnic cleansing".

Marzuq al-Halabi, a Palestinian-Israeli analyst and researcher at the Van Leer Institute in Jerusalem, believes the move is designed with two aims in mind.

It leaves a "constant threat" of expulsion hanging over the heads of the minority as a way to crush political activity and demands for reform, he wrote on the Hebrew website Local Call. And at the same time it casts Palestinian citizens out into a "territorial and governmental emptiness".

Inevitably, the plan revives fears among Palestinian citizens of the Nakba, the Arabic word for "catastrophe": the mass expulsions that occurred during the 1948 war to create Israel on the ruins of the Palestinian homeland.

Jabareen observed that the population swap implied that Palestinian citizens "are part of the enemy. It says we don't belong in our homeland, that our future is elsewhere".

The idea of an exchange of populated land was first formalised by Lieberman in 2004, when he unveiled what he grandly called a "Separation of the Nations" programme. It quickly won supporters in the US, including elder statesman Henry Kissinger.

The idea of a land and population swap, sometimes termed "static transfer," was alluded to by former prime ministers, including Ehud Barak and Ariel Sharon, at around the same time.

But only Lieberman set out a clear plan. He suggested stripping as many as 300,000 Palestinians in the Triangle of their Israeli citizenship.

Other Palestinian citizens would be expected to make a "loyalty oath" to Israel as a "Jewish Zionist state" or face expulsion to a Palestinian state. The aim was to achieve two states that were as "ethnically pure" as possible.

Jabareen noted that Lieberman's populated-land exchange falsely equated the status and fate of Palestinians who are legal citizens of Israel with Jewish settlers living in the West Bank in violation of international law.

Lieberman exposed his plan to a bigger audience in 2010, when he addressed the United Nations as foreign minister in the first of Netanyahu's series of recent governments. Notably, at that time, the prime minister's advisers distanced him from the proposal.

A month after Lieberman's speech, it emerged that Israeli security services had carried out secret exercises based on his scenario. They practised quelling massive civil disturbances following a peace deal that required redrawing the borders to expel large numbers of Palestinian citizens.

Behind the scenes, other Israeli officials are known to have supported more limited populated-land swaps.

Documents leaked in 2011 revealed that three years earlier the centrist government of Ehud Olmert had advanced just such a population exchange during peace talks.

Tzipi Livni, then the foreign minister, had proposed moving the border so that several villages in Israel would end up in a future Palestinian state. Notably, however, Umm al-Fahm and other large communities nearby were not mentioned.

The political sympathies between Lieberman and Livni, the latter widely seen as a peacemaker by the international community, were nonetheless evident.

In late 2007, as Israel prepared for the Annapolis peace conference, Livni described a future Palestinian state as "the answer" for Israel's Palestinian citizens. She said it was illegitimate for them to seek political reforms aimed at ending Israel's status as a "home unto the Jewish people".

The first hints that Netanyahu might have adopted Lieberman's plan came in early 2014 when the Maariv newspaper reported that a population exchange that included the Triangle had been proposed in talks with the US administration, then headed by Barack Obama.

The hope, according to the paper, was that the transfer would reduce the proportion of Palestinian citizens from a fifth of the population to 12 per cent, shoring up the state's Jewishness.

Now Netanyahu has effectively confirmed that large-scale populated-land swaps may become a new condition for any future peace agreement with the Palestinians, observed Jabareen.

At Lieberman's request in 2014, the Israeli foreign ministry produced a document outlining ways a land and population exchange could be portrayed as in accordance with international law. Most experts regarded the document's arguments as specious.

The foreign ministry concluded that the only hope of justifying the measure would be to show either that the affected citizens supported the move, or that it had the backing of the Palestinian Authority, at present headed by Mahmoud Abbas.

Anything short of this would be a non-starter because it would either qualify as "forced transfer" of the Triangle's inhabitants, a war crime, or render them stateless.

The problem for Israel is that opinion polls have repeatedly shown that no more than a quarter of Palestinians in the Triangle area back being moved into a Palestinian state. Getting their approval is likely to prove formidably difficult.

Zahalka rejected claims by Israeli politicians that this was a vote of confidence from Palestinian citizens in Israeli democracy.

"Israel has made the West Bank a living hell for Palestinians, and few would choose to inflict such suffering on their own families. But it also because we do not want to be severed from the rest of the Palestinian community in Israel – from our personal, social and economy life."

Jabareen agreed. "We are also connected to places like Nazareth, Haifa, Acre, Jaffa, Lid and Ramle."

And he noted that Netanyahu and Lieberman were talking about redrawing the borders to put only their homes inside a future Palestinian state.

"Umm al-Fahm had six times as much land before Israel confiscated it. We still consider those lands as ours, but they are not included in the plan."

It is in this context, one where Palestinians citizens will not consent to their communities being moved outside Israel's borders, that parallel political moves by Netanyahu should be understood, said Jabareen.

Not least, it helps to explain why Netanyahu has made recognition of Israel as a Jewish state by Abbas' Palestinian Authority a precondition for talks.

Aware of the trap being laid for it, the PA has so far refused to offer such recognition. If it can be arm-twisted into agreement, Netanyahu will be in a much stronger position.

He can then impose draconian measures on Palestinians in Israel, including loyalty oaths and an end to their demands for political reform – under threat that, if they refuse, they will be moved to a Palestinian state.

At the same time, Netanyahu has been pushing ahead with a new basic law that would define Israel as the nation state of the Jewish people, rather than of Israel's entire population. The legislation's intent is to further weaken the Palestinian minority's claim on citizenship.

Netanyahu's decision to ban the Islamic Movement as a "terrorist group" also fits the picture.

In a 2012 report by the International Crisis Group, a Washington and Brussels-based conflict resolution group, an official in Lieberman's party explained that one of the covert goals of Lieberman's plan was to rid Israel of "the heartland of the Islamic Movement".

Conversely, Netanyahu's Likud allies and coalition partners have been pushing aggressively to annex settlements in the West Bank.

Zahalka noted that the prime minister gave his backing last week to legislation that would expand Jerusalem's municipal borders to incorporate a number of large settlements, a move that would amount to annexation in all but name.

The pieces seem to be slowly falling into place for a populated-land exchange that would strip hundreds of thousands of Palestinians of their Israeli citizenship.

Paradoxically, the biggest obstacle may prove to be Netanyahu himself and his reluctance to concede any kind of meaningful state to the Palestinians.