Israel hails the Atarot mall as a coexistence project, but Palestinians worry it will exacerbate already dire Palestinian economy in Jerusalem The 200m shekel ($53m) project, which opened its doors to the public at noon on Tuesday, is in the Atarot industrial area, a mere two-minute drive from one of Israel’s most infamous military checkpoints, Qalandiya, which cuts off the Palestinian city of Ramallah from Jerusalem.

Erected by Rami Levy, an Israeli businessman and owner of the third largest Israeli supermarket chain, Rami Levy Hashikma Marketing, the Atarot mall has been in the works for two years.

It spans 25,000 square metres and boasts two floors complete with 50 stores and restaurants, including several Palestinian-owned chains, and a spacious parking lot.

Levy’s supermarket chain, which also operates branches in illegal settlements across the occupied West Bank, is known for its competitive prices and unmatched deals.

The location of the Atarot complex is strategic and easily accessible to residents of the surrounding Palestinian neighbourhoods, such as Beit Hanina, Shufat and Dahiyeh. Levy has marketed it as an oasis of peace, built for both Palestinian and Israeli consumers.

“These centres can prove that it is possible to live together and treat each other well,” he said in a video produced and shared on social media in November by COGAT, the Israeli military arm overseeing the occupied Palestinian territory.

“Everyone is invited here. I think we can prove to everyone that it is possible to coexist,” he continues in the video, which showed images of the supermarket mogul looking out at the Israeli separation wall - deemed illegal under international law - and the Palestinian homes trapped behind it.

‘We cannot normalise their occupation’

The mall has sparked a debate among Palestinians in Jerusalem, with some calling for the boycott of both the mall itself and the Palestinian stores operating within it.

Late on Tuesday, local media reported that Palestinian youths had thrown Molotov cocktails from the Palestinian town of al-Ram, behind the separation wall.

However, others say the complex is needed amid a lack of shopping centres in the area.

“We live right next to the mall. We’re very happy about it opening; we needed a supermarket like this in the area,” said a Palestinian woman, who preferred not to be named, as she waited with her two daughters to enter the Rami Levy supermarket on the ground floor of the mall.

“Why are we lying to ourselves? We’re a state under occupation. We’re forced to buy Israeli products. The Palestinian supermarkets sell Israeli products, too. There’s no alternative. It’s cheaper for us to buy from here,” the mother told Middle East Eye.

Israel imposes restrictions on trade coming out of the West Bank, making it difficult for Palestinian products to enter Jerusalem. While there are some alternatives for residents of Jerusalem, those who choose to boycott Israeli products must go out of their way to do so.

Fadi Mtour, a 38-year-old activist and resident of Jerusalem, said he completely rejects the idea of the mall.

“We see coexistence every day. We see it in the checkpoints, in the killings of Palestinians, in home demolitions. We live it on a 24-hour basis,” he told MEE.

“We cannot normalise their occupation or give it legitimacy.”

Pointing to several Israeli stores that have recently opened in occupied East Jerusalem, Mtour said he believes the mall is “part of a wider campaign to hurt the Palestinian retailer and Judaise Jerusalem”.

"When I pass by, I try not to even glance at the mall. It’s sad. Everything that we used to say is a red line and wouldn’t let happen has already happened - and with complete ease,” he continued. “There is no alternative to offer the people. There is no leadership in Jerusalem to guide them.”

Jerusalem’s Palestinian population has suffered from a lack of political representation and leadership for decades.

The absence of a unifying leadership has been particularly acute since the signing of the Oslo Agreements in the 1990s by Israel and the Palestine Liberation Organisation.

The deal led to the creation of the Palestinian Authority (PA), a West Bank-based interim government meant to lead to the foundation of a Palestinian state in East Jerusalem, the West Bank and the Gaza Strip.

But the accords collapsed, a second popular Palestinian uprising took off in 2000, and then Israel began building the separation wall in 2004, claiming it was necessary for “security reasons”.

The wall has had devastating effects on the Palestinian economy in Jerusalem. With more than four million Palestinians in the occupied West Bank needing hard-to-obtain Israeli military permits to access the city, Jerusalem’s erstwhile status as the economic and commercial capital for Palestinians was irreparably damaged.

Israel has completely sidelined the PA in Jerusalem, where the Palestinian body holds little to no political clout.

Instead, Israel claims the entirety of Jerusalem as its capital, despite the fact that its military occupation of the city’s eastern half for the past 51 years is considered illegal under international law.

The Palestinians who live in Jerusalem are treated by the Israeli state as foreigners, holding only residency cards that can be revoked if they live outside the city for a certain period of time, despite having been born there.

In contrast, Israel grants any Jewish person Israeli citizenship upon birth in Jerusalem, and allows them to maintain their status even if they live abroad.

Lack of Palestinian leadership in Jerusalem

Moussa Jafar, one of the owners of the well-known Palestinian Jafar supermarket in nearby Beit Hanina, said a lack of awareness and leadership in Jerusalem means that many Palestinians will do their shopping at the new mall.

“People do not understand that if we keep the money flowing within the Palestinian community, we are benefiting each other - the money will come back one way or another, instead of putting it into the Israeli market,” he told MEE.

Jafar said he and other Palestinian store owners are afraid of the new mall’s impact on their businesses.

“We’re very bothered by it. We’re trying to improve customer service, offer relatively cheaper prices and bring unique goods, but there is no way that we can compete with Rami Levy’s prices. We have to be realistic,”  Jafar said.

“I go to these supermarkets and I see what they sell. I’m baffled. Some items I buy for 10 shekels ($2.70) and sell at 15 shekels ($4). I go into a Rami Levy store and find the same item being sold for seven shekels ($1.90). They also sell things in bulk and have cheap deals,” he continued.

The new mall's negative impact on the Palestinian economy in Jerusalem has been the main argument used by those calling for its boycott.

Hijazi al-Rishq is the head of the retailers' committee of Salah al-Din Street, the main economic hub for Palestinians in Jerusalem that lies just across from the Old City.

“Many people in Shufat and Beit Hanina will avoid going to Salah al-Din Street because of the lack of parking spaces and the congestion there. Israeli police are often there waiting to fine anyone who parks illegally,” Rishq told MEE.

“Anyone crossing Qalandiya, or those who live in the occupied West Bank and hold Jerusalem IDs, will find it much more convenient to pass by the mall on their way.

“This project is part and parcel of the Judaisation of Jerusalem. It will have a devastating impact on not only the Palestinian stores in the area surrounding the mall but also across Jerusalem,” he said.

Palestinian stores in the mall

The fact that some Palestinian store owners, both in Jerusalem and in the occupied West Bank, have decided to rent stores in the mall has added to the controversy.

Mohammad Uweiwi, owner of TAG men’s clothing store in Ramallah, opened a shop in the Atarot mall on Tuesday.

“It’s cheaper for us to rent here as opposed to in other areas of Jerusalem,” he told MEE.

“Everyone is free to make their own choices. Why not have something close to your house? Why not have Palestinian stores next to your homes, something that is quick and accessible?” he said.

This project is part and parcel of the Judaisation of Jerusalem

According to Salah Haniyeh, head of the Palestinian Consumer Protection Association, at least six Palestinian-owned stores are opening in the mall on Tuesday and Wednesday.

Haniyeh said his group is working in partnership with other Palestinian institutions, as well as the Arab Chamber of Commerce and Industry in Jerusalem, to pressure those store owners to withdraw.

“If they do not agree, the store names will be placed on a boycott list that will be published on social media, in newspapers and on the website of the chamber of commerce,” Haniyeh told MEE. “If they decide to withdraw, and if they face any kind of financial losses, we will try, through lawyers, to compensate them.

“We have directed a message at the Palestinian retailers and consumers that the main goal of this project is to destroy the Palestinian economic sector in Jerusalem. We care about avoiding any projects with the Israeli occupation and its colonialism,” Haniyeh said. 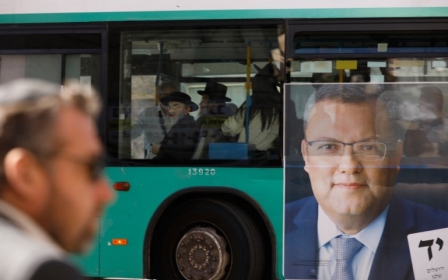 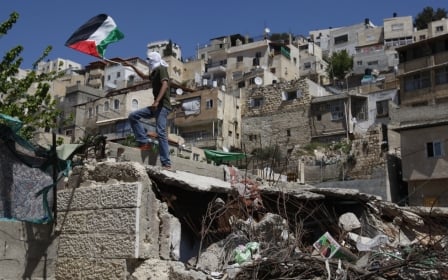