An American NGO has filed a lawsuit against the State Department and its head, Secretary of State Mike Pompeo, over a $23bn arms sale to the United Arab Emirates that the organisation claims was rushed through without meeting proper legal requirements.

The New York Center for Foreign Policy Affairs (NYCFPA) filed the suit in the US District Court for the District of Columbia on Wednesday, on the grounds that the sale violates the US Arms Export Control Act (ACEA).

NYCFPA accuses the State Department of "rushing through" the transaction, which includes the sale of killer drones and F-35 jets, without regard to American interests or stability in the region. "With this deal going forward, the U.S. is setting a baseline for a very dangerous proliferation of weapons in the region and is enabling an arms race to start in the Middle East," NYCFPA's principal director, Justin Russell, said in a news release obtained by Middle East Eye on Wednesday.

The State Department did not respond to MEE's request for comment by the time of this article's publication.

The White House has said that the weapons deal protects US national security by "enabling the UAE to deter increasing Iranian aggressive behaviour and threats".

Those who back the sale have also argued that the UAE is an important US partner in the Middle East, and therefore, the agreement supports US foreign policy.

The outgoing Trump administration has been pushing through a whirlwind of arms deals with Middle Eastern countries during its final weeks in the White House, including the approval on Tuesday of $290m in bombs to Saudi Arabia.

On the same day, the State Department also announced a $4bn sale of Apache helicopters to Kuwait, $104m in defence equipment to outfit the plane of Egyptian President Abdel Fattah el-Sisi, and another $65.6m in precision targeting equipment for Egyptian warplanes.

'More is required under the law'

Last year, the Trump administration approved an $8.1bn arms sale to Saudi Arabia and the UAE, controversially declaring an "emergency" in order to bypass Congress and make the sale.

Those weapons contracts, however, are dwarfed by the massive $23bn arms sale to the UAE that was announced in November, a few months after the Gulf country signed a normalisation agreement with Israel. Israel has argued against the sale.

The US Senate failed by a slim margin to block the arms deal earlier this month despite growing calls from anti-war and human rights groups to halt it. Under the ACEA, which gives the US president authority to control the import and export of defence equipment, Congress has the right to block weapons sales - but its approval is not needed. For decades, some legislators, including President-elect Joe Biden, have called for the 44-year-old legal provision to be reformed.

Still, in Wednesday's court filing, NYCFPA argued that the State Department had failed to meet the basic requirements for the $23bn arms sale that are laid out under the ACEA legislation.

"More is required under the law," NYCFPA's court filing reads, with the group highlighting a provision in the ACEA that prohibits the sale or lease of arms by the US to another country unless, among other things, the executive branch finds that the sale "will strengthen the security of the United States and promote world peace".

While the State Department has said the deal does just that, it has provided little evidence of such, which it is obligated to do under the Administrative Procedure Act (APA).

'An active and known aggressor'

In Wednesday's filing, NYCFPA argued that the State Department had violated the APA through the sale because it had not provided the necessary evidence to defend the sale.

Specifically, the APA requires the State Department to address changes in its policy by laying out a "rational connection" between the facts that were considered and the ultimate decision to approve the weapons deal.

"The Department of State failed to make the required findings here. In addition, the Department failed to provide a reasoned explanation for its rushed sale of sensitive weapons systems to the UAE, nor can one infer that it has one, given the available evidence," NYCFPA argued.

The group noted that the State Department had failed to answer dozens of questions submitted by senators last month in an attempt to clarify the need for the massive arms sale. "Just a mind-blowing number of unsettled issues and questions the administration couldn’t answer. Hard to overstate the danger of rushing this," Senator Chris Murphy said following the Trump administration's announcement of the sale.

Ahead of the failed Senate vote to block the move earlier this month, lawmakers - mostly Democrats - underscored Abu Dhabi's role in the conflicts in Libya and Yemen as well as its poor human rights record at home.

NYCFPA, which has focused much of its advocacy and research on the conflicts in Libya and Yemen, said the UAE's military involvement in the two countries was a main point of concern.

"The UAE is already an active and known aggressor in the region," the organisation said in Wednesday's news release.

"Not only will the U.S. be contributing to the world's worst humanitarian crisis, but we will be contributing to an arms race in the region due to our country's promise of qualitative military edge to Israel" through the sale, the group said.

Devastation in Yemen and Libya

NYCFPA argued that there was "widespread and publicly available evidence" that suggests the weapons being sold to the UAE will be used in "direct contravention of world peace and US security, as well as prior US policy".

"Before such advancement of weaponry to the UAE, the American people must be confident that we can trust countries like the UAE not to cause unrest in the region. NYCFPA has proven earnestly why such a deal should not be granted, especially with the administration's lack of reasoning for such a consequential agreement," the group said in its court filing.

Rights groups and activists have long objected to the UAE's role in the wars in Yemen and Libya.

When the arms deal was announced in November, Amnesty International warned that the weapons would be used for "attacks that violate international humanitarian law and kill, as well as injure, thousands of Yemeni civilians".

Opponents of the sale have expressed hope that President-elect Biden's incoming administration will reverse or at least condition the delivery of the weapons.

Abu Dhabi has been a chief partner in the Saudi-led coalition in Yemen, which has devastated the small Gulf country.

Since the conflict erupted in late 2014, widespread famine and disease have been documented and more than 100,000 people have been killed. In 2019, the UN warned that the situation in Yemen had become the world's "worst humanitarian crisis".

At the same time, leading aid organisations have documented massive funding shortfalls during the past year, with several reporting that they have barely received half of the required donations needed to meet the basic needs of the 80 percent of the population that requires humanitarian assistance.

While the UAE has insisted that it withdrew from Yemen last year, critics have accused Abu Dhabi of continuing to arm and train militias in the conflict.

Meanwhile, in Libya, the UAE has been an ardent backer of rogue eastern general Khalifa Haftar, who is trying to violently overthrow the UN-recognised government in Tripoli. Rights groups as well as the United Nations have accused Haftar's forces of abuses in Libya.

Emirati support for the eastern commander also violates a UN arms embargo on the North African country, and earlier this month, the US accused the UAE of providing support for Russian mercenaries fighting against the government in Tripoli. 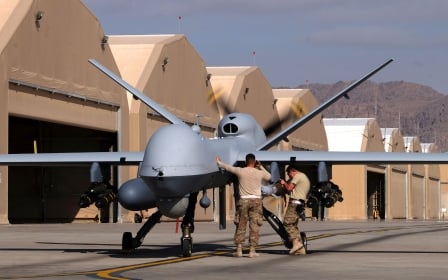 Refugees
Israel and the UAE working together to eliminate UNRWA: Report