Palestinian Authority security forces arrested a human rights campaigner over a Facebook post on Monday, after a journalist was detained for calling on President Mahmoud Abbas to resign.

Issa Amro, a coordinator for the NGO Youth Against Settlements, had called out security forces on social media over the arrest of Ayman Qawasmi, a radio journalist who had said that Abbas must go for failing to protect Palestinians.

Amnesty International criticised the arrest, calling it a “shameless attack on freedom of expression”.

“Criticising the authorities should not be a criminal offence. Issa Amro’s arrest is the latest evidence that the Palestinian authorities are determined to continue with their repressive campaign against free speech,” Magdalena Mughrabi, deputy director for the Middle East and North Africa at Amnesty International, said in a statement.

Amro had urged spreading the news about the journalist’s arrest and reporting and documenting the authorities’ “violations”.

Ahmed Amro, Issa Amro’s brother, said security forces came to their family home in Hebron on Sunday evening looking for the activist. They called him, asking him to stop by "for a conversation".

“He went to them on Monday morning, and until now we haven’t heard from him. We have no way of communicating with him,” Ahmed Amro told MEE.

“My brother didn’t do anything wrong. We don’t know why they arrested him.”

Translation: There are journalists who are being threatened by the security forces for publishing the news about Ayman Qawasmi's arrest. I hope that every journalist in the country publishes this news because it is true, 100 percent, not a rumour. Secondly, I call on everyone who gets threatened to talk to me, so we can complain about these threats to the Europeans and document the illegal violations. Not everyone can create a law and a state for himself. The law is clear and not open to various interpretations, and everyone should respect it. There is a journalist called Ayman Qawasmi, and there is a judiciary, a civil society, a syndicate for journalists and activists who will stand with him. Security forces should protect the law, not violate it. Freedom to Ayman Qawasmi (Screengrab/Facebook)

Amnesty noted an “escalation” of the Palestinian Authority’s crackdown on dissent.

Last month, the rights group accused the Palestinian Authority and Hamas, which runs Gaza, of  “launching a repressive clampdown on dissent that has seen journalists from opposition media outlets interrogated and detained in a bid to exert pressure on their political opponents”.

The PA shut down 29 websites based in the West Bank in July. 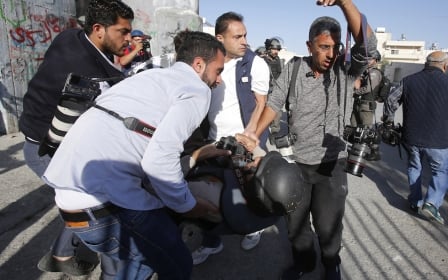