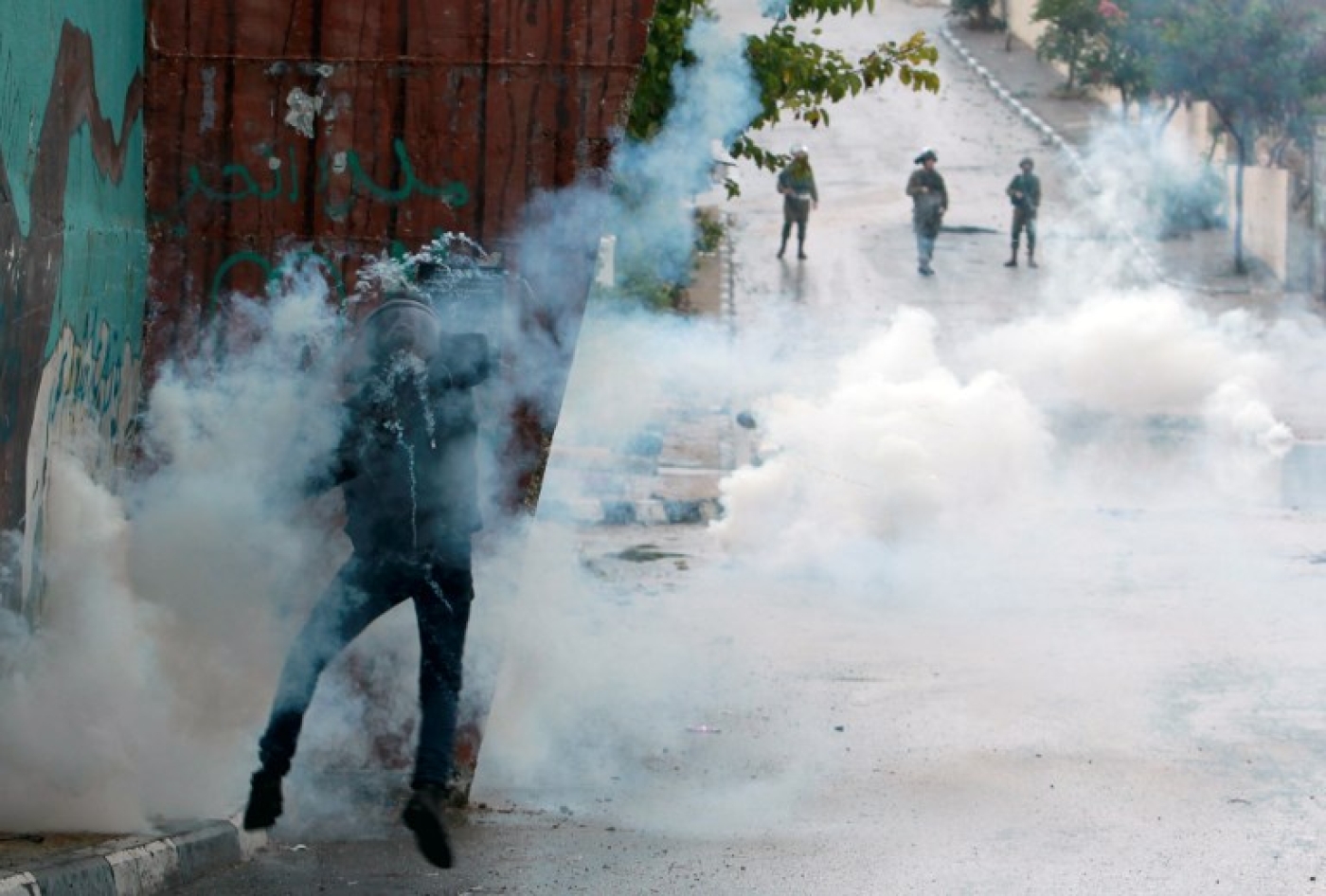 WEST BANK - For years, residents of Aida refugee camp in the southern occupied West Bank have learned to live with the ever-looming threat of tear gas.

Anas Abu Srour, 29, a coordinator at the Aida Youth Centre who has lived his entire life in the camp, recalled how, as a child, every game had to be prefaced with an exit strategy.

'From my years of doing this kind of research, it is, in my opinion, unprecedented to use this quantity of tear gas over this length of time'

“When we were children, every time before we started playing we would look for a place to run to if they (Israeli soldiers) shot tear gas,” Abu Srour told Middle East Eye.

The small and densely populated refugee camp has long been the target of Israeli military raids, but a University of California, Berkeley study released on Thursday led Pierre Krahenbuhl, commissioner general of the UN Relief and Works Agency for Palestinian Refugees in the Near East, to designate Aida the community most exposed to tear gas in the world earlier this year.

“When Palestine refugee mothers are forced to seal their infants in closets while clouds of tear gas saturate their shelter, the situation has gone too far,” Krahenbuhl said at the time.

The study, entitled No Safe Space: Health Consequences of Tear Gas Exposure among Palestine Refugees, is the first of its kind to survey hundreds of residents of Aida about the medical, psychological, and societal effects of tear gas. 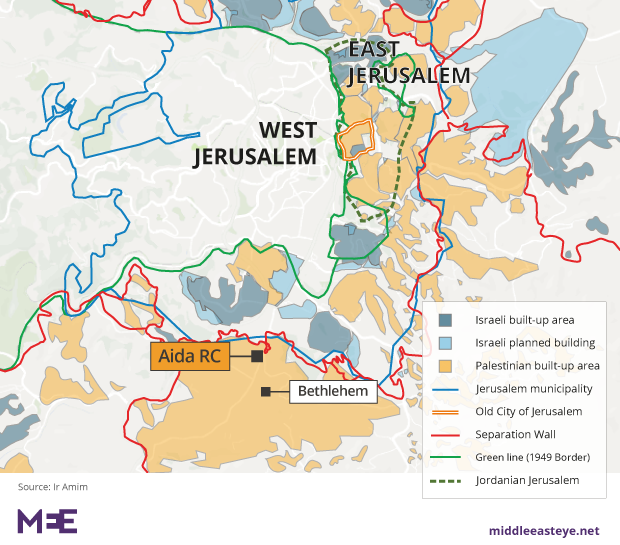 The researchers concluded that tear gas is being used by Israeli forces in a “widespread, frequent, and indiscriminate” manner which “may be… in breach of international norms".

“There are a lot of places where there is an excessive amount of tear gas used, but from my years of doing this kind of research, it is, in my opinion, unprecedented to use this quantity of tear gas over this length of time,” Dr Rohini Haar, the lead researcher of the study, told MEE.

“This amount of tear gas for this small, populated urban slum over not a few weeks, but a few years… I have not seen or heard of that anywhere else in the world.”

'The most basic right'

In 2014, 45-year-old Aida resident Noha Qatamish died of excessive tear gas inhalation after Israeli forces shot canisters of the chemical weapon into her home - although the army rejected responsibility for her death at the time.

Qatamish’s death marked a dramatic instance of a much broader phenomenon. According to the study, every single one of the 236 individuals surveyed had been exposed to tear gas at least once in the past year, 84.3 percent of them while they were at home.

'When an area is full of tear gas, what can an onion do?'

Many respondents complained of recurrent respiratory and dermatological issues which they attributed to their repeated exposure to tear gas, while some women said they had miscarried shortly after being subjected to the chemical weapon.

“Mothers legitimately had questions about what happens when a two-month-old baby is exposed regularly to something like this over months and years,” Haar said.

The Israeli army, she added, has not publicly disclosed the chemical components of the tear gas it used in the occupied Palestinian territory, making it difficult for medical professionals and researchers to understand exactly what long-term impact it might have on people’s healths.

Tear gas was also reported to cause a number of injuries, either when people were directly struck by tear gas canisters, or while trying to escape the noxious fumes. Salah Ajarma, the general manager of the Lajee Centre in Aida, notably told MEE that an elderly man had broken both legs earlier this month while fleeing tear gas that was shot in the camp while he was leaving its mosque.

The frequency of exposure to tear gas, coupled with a lack of healthcare facilities in the camp, fragile infrastructure, and the cost of material such as gas masks, makes it hard for Aida residents to protect themselves.

For example, as Haar noted, one of the most effective methods to counter the effect of tear gas is washing with large quantities of water, but victims were constrained by the refugee camp’s limited access to it.

During demonstrations, Palestinians often resort to smelling onions or tissues sprayed in heavy perfume to counter the effects. But such methods only amount to stop-gap measures, Ajarma said.

“When they shoot just one or two canisters, then it’s easy,” he said. “But when an area is full of tear gas, what can an onion do?”

“The most basic right as a human is the right to have clean air,” Abu Srour said. “When you feel sometimes that you don’t have air to breathe, you recognise that you are being treated as a human being of a lower class.”

'We try to teach children what their rights are, but then they say: “Why are we talking about our rights? We don’t have rights"'

It concluded that Aida residents’ life under unpredictable yet constant military pressure caused a state of “learned helplessness” defined as when an individual or a community “suffers from a sense of powerlessness, arising from a traumatic event or persistent failure to change events that are causing the trauma".

“The intention of creating a sense of learned helplessness is typically to induce subservience to authority and a sense of acquiescence to being dominated so that individuals and communities will accept their conditions,” the study read.

The Israeli army’s use of tear gas in Aida at all times of the day or night, regardless of whether young Palestinians were throwing stones in the direction of Israeli forces or not, have left residents guessing as to the motives behind such high use of weapons designed as crowd-control measures.

Aida’s location - directly adjacent to the illegal Israeli separation wall and an Israeli army base just north of the Palestinian city of Bethlehem - and its history of political engagement has long made it a target for Israeli forces, Ajarma said.

“Aida is close to a military base, six watchtowers surround the camp, so it’s easy for Israelis to come in anytime they want,” he said. “Sometimes they come in to teach soldiers how to shoot, especially different kinds of tear gas, sometimes at people, sometimes at windows.”

“They want to break the unity of the people of the area,” Ajarma added. “They want to tell the people: ‘Whether you are at home, or in school, you can be attacked by us.' They know that camps are a life of resistance.”

“It’s a kind of collective punishment,” he said. “Israel is always using these tools to force people to think about emigration, or to leave the camp and surrounding areas so it can confiscate more lands. Of course, it will not work, but people are suffering every day because of their practices.”

As of Thursday morning, the Israeli army had not responded to MEE’s request for comment on its use of tear gas in the occupied Palestinian territory and whether its forces follow certain rules of engagement.

However, an army spokesperson later sent MEE a statement which claimed that "the decision to use tear gas is made by commanders in the field, and its purpose is to end violent riots while limiting the potential danger to rioters, instead of using more severe means that may increase chances of injury."
The statement went on to add that the army would "examine the report and draw the relevant conclusions if needed."

Meanwhile, the Israeli army’s use of tear gas two or three times a week on average in Aida has also had a serious impact on social ties in the community.

Both Abu Srour and Ajarma spoke of social events such a weddings, football games or scout meetings that have been disrupted after tear gas was sprayed. Many residents avoid neighbourhoods located closer to the military base.

Ajarma lamented that the continuous exposure to military violence made it hard to instil a sense of worth in youth of the camp.

“We try to teach children what their rights are, how to be a better person, to think about their futures, their environment, but then they say: 'Why are we talking about our rights? We don’t have rights,’” he said. “It can kill the life of the new generation.” 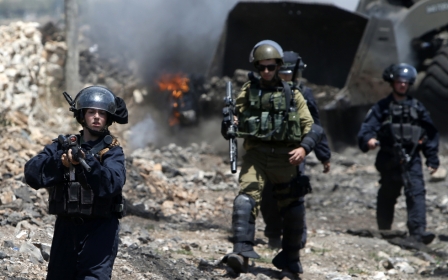