A 23-year-old Palestinian prisoner died in Israel’s Ketziot prison overnight on Tuesday under what rights groups are calling “suspicious” circumstances.

Meanwhile, another Palestinian man was shot dead by Israeli forces near the occupied West Bank’s Bethlehem in a suspected car-ramming attack.

The prisoner, Nour al-Barghouthi, a resident of Abdoud village in the northern West Bank, was allegedly in the bathroom of Section 25 of the prison in the Negev when he suddenly fell unconscious, the Palestinian Prisoners' Society (PPS) said.

“His fellow prisoners heard a crashing in the bathroom and saw that he had fallen down,” PPS spokesman Abdullah Zghari told Middle East Eye. “They tried to break down the door but they couldn’t so they called for the guards.”

According to Zghari, Israeli prison guards took more than 30 minutes to arrive at Barghouthi's aid, and only came after the prisoners in the section began to yell and cause a commotion.

'He was a young, healthy man, with no preexisting health conditions. So how does something like this happen, just out of the blue?'

After failing to resuscitate Barghouthi with CPR, the prison officials reportedly called for an ambulance and transferred the unconscious inmate to an Israeli hospital. By the time the ambulance arrived at the hospital, the young man was dead.

“The Israeli Prison Service contacted us this morning and told us that Nour died on his way to the hospital,” Zghari told MEE, adding that the PPS had informed the family of the news.

“They were devastated,” Zghari said. “He was a young, healthy man, with no preexisting health conditions. So how does something like this happen, just out of the blue?” he asked, saying that he wasn’t ruling out the possibility that foul play was involved.

Zghari said the PPS has demanded Israeli authorities perform an autopsy on Barghouthi’s body to determine the cause of death, and open an investigation into why it took the guards so long to respond.

“The guards blatantly neglected to give him proper medical treatment, which we believe resulted in his untimely death. If they had responded immediately and got him proper care, he could be alive right now.”

The bodies of the three prisoners who died last year, along with two others who died in the years 1980 and 2018, are still being held by Israeli forces.

Zghari said he believes Barghouthi’s body will also remain in Israeli custody, in line with a policy that states that deceased prisoners must “serve out their full sentences, even if they are dead”, he said.

“Nour had served four years of an eight-year sentence, so it’s possible his family won’t even be able to mourn and bury him for another four years,” he said.

“This is the pain that Palestinian people, and the families of prisoners, must endure simply for trying to free themselves and their people from the occupation.”

In the West Bank, meanwhile, a Palestinian man, identified as 25-year-old Ibrahim Halsa, was shot dead on Wednesday morning by Israeli border police officers at the container checkpoint in the southern district of Bethlehem.

Video footage of the incident shows a white van, driven by Halsa, approach the checkpoint and suddenly veer into an armed Israeli border police officer, knocking them to the ground.

Halsa can then be seen jumping out of the vehicle and chasing down the officer, allegedly with a knife in his hand. A number of armed soldiers then chase after him out of view of the cameras.

According to Israeli police spokesman Micky Rosenfeld, Halsa was shot and killed on the scene by the soldiers, while one officer sustained moderate injuries. Rosenfeld also claimed that after a sweep of the scene, authorities reportedly found a pipe bomb at the scene.

Local Palestinian media reported that following the incident, Israeli forces raided his hometown of Sawahra, which is located right next to the checkpoint, and detained his parents for interrogation.

Halsa’s body was also taken into Israeli custody - a common practice of the Israeli government in what it says is meant to “deter” such attacks in the future.

Attacks such as Wednesday’s on uniformed Israeli forces in the occupied territory have become increasingly common in recent years, though the number of attacks has decreased with the spread of the coronavirus in Israel and the Palestinian territories. 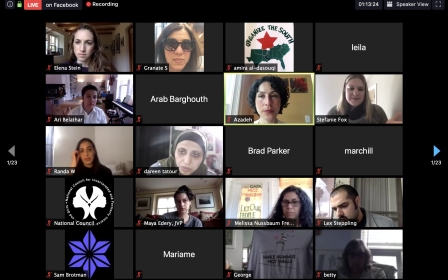 Occupation
'We live on hope': The mothers Palestinian prisoners left behind