Poland is about to take in 9,000 refugees under new EU rules, exposing widespread divisions in the country 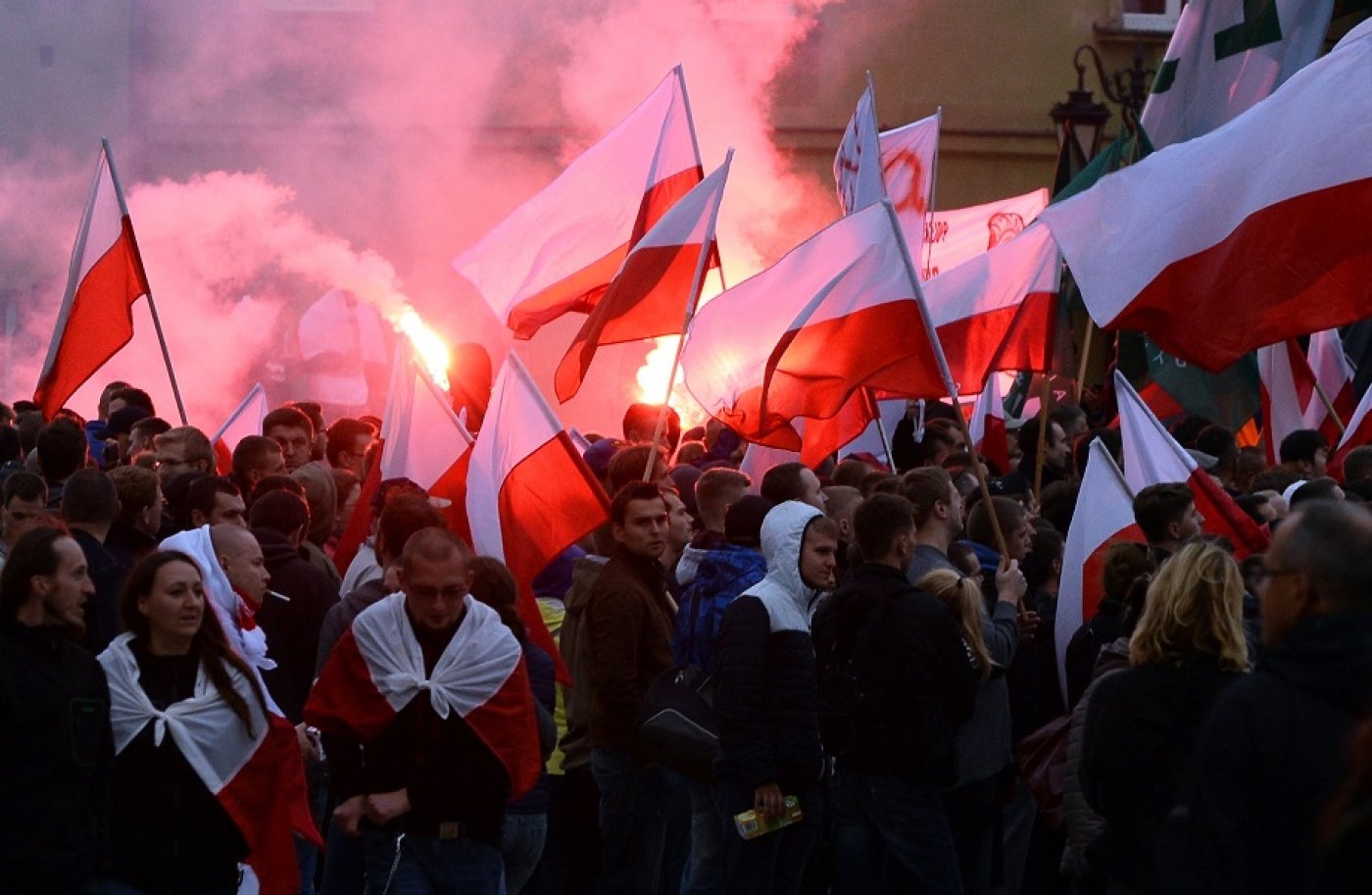 Right-wing demonstrators hold flags during a protest against migrants in Warsaw on 12 September, 2015 (AFP)
By
Natalia Ojewska

WROCLAW, Poland - Poland has been left largely untouched by the ongoing refugee and migrant crisis in Europe, yet the issue has divided society and led to a fierce anti-migrant backlash.

Warsaw has been one of the fiercest opponents of EU attempts to force members to accept their share of 120,000 refugees – a bill that was pushed through the European parliament on Tuesday despite fierce opposition. In the end, Poland acquiesced and voted in favour, but the debate in the run-up shows how fiercely many Poles feel about the issue.

Polish society is one of the most ethnically homogenous in the world, after North Korea, Japan and Albania. According to the official European statistics the proportion of foreigners in Poland accounts for only 0.1 percent of the entire population, the smallest foreigner percentage in the EU. More than 90 percent openly identify as Catholic, with only some 20,000 Muslims recorded in the country in 2010.

The arrival of tens of thousands of asylum seekers to neighbouring countries in recent months has sparked widespread alarm. There have already been waves of anti-migrant protests, with asylum seeker supporters receiving death threats and the Polish government saying it would only allow in refugees if the EU agreed to “seal” its borders. The prospect of further arrivals into Poland itself are only expected to exasperate anti-migrant and refugee sentiment. But not everyone shares these views: many have instead been standing up to call for greater inclusion and leniency, revealing a much more complex social dynamic than is usually portrayed by the media.

Abdulcadir Farah, a Somalian, was the first African to be granted refugee status in Poland, back in the late 1980s. Then, he said, asylum seekers were welcomed, and provided with shelter by the Polish government.

“I never experienced any discrimination even though people were not familiar with the concept of asylum seekers at all,” Farah told MEE.

“Unlike today there was no debate about whether refugees should be accepted into Poland or not,” said Farah, who is the president of the Foundation for Somalia, an NGO set up to support refugees and migrants in Poland, as well as providing humanitarian aid in Africa. Farah talked with MEE a few days before being killed in a blast in Mogadishu, highlighting the fact that many refugees continue to face a serious danger in their home countries.

Since 1989, when the Berlin Wall fell and Russia’s control over Eastern Europe crumbled, Poland has undergone dramatic change, transforming into a democracy, and also joining the EU and NATO. Today, its economy is the sixth largest in the EU. However, while many Poles have gone to work elsewhere in the EU, the inbound flow has been limited and few foreigners choose to live or work in Poland.

Internal UNHCR documents penned last year found that over 80 percent of Polish respondents said they were “sympathetic” towards refugees but this changed as the influx of migrants into the EU swelled this year and the mood soured further when the EU began to call on its members to develop a common solution and rehome refugees. Today, over 56 percent of Poles are against receiving any refugees from the Middle East and North Africa.

The first wave of xenophobic messages flooded the internet in July, after the ministry of interior accepted earlier EU proposals to accept 2,000 refugees who had either fled the civil war in Syria or political persecution in Eritrea. The[N4]  project was designed to be spread over two years with first families arriving in Poland in 2016. After this announcement, the Institute of Media Monitoring, measured that every third comment posted on social media platforms contained hate speech directed towards the asylum seekers.

The bulk of the criticism came in the form of Islamophobia with social media users expressing fear that many of the asylum seekers would be Muslims and therefore have ties to terrorist organisations.

The Polish government, which is centre-right, largely chose to respond to the refugee crisis with conservativism and skepticism.

Right up until the 11th hour policy reversal, Prime Minister Ewa Kopacz rejected EU proposals for compulsory quotas, saying that Poland would only receive “as many refugees as we can afford - not one more and not one less”.

Kopacz also repeatedly stressed that Poland would do everything it could to distinguish between the refugees and economic migrants, which it said it would refuse to take.

The issue of national security has dominated the debate throughout.

“We have to be 100 percent sure that individuals who will be allowed into the territory of Poland will not pose a threat to our citizens,” Jaroslaw Buczek, vice director of communications at the Ministry of Interior told MEE.

“An individual who will arrive in Poland must demonstrate that he or she can integrate in our culture and society,” Witold Waszczykowski, a member of parliament for the Law and Justice Party, told MEE.

“Therefore, we can place greater hopes that Christian refugees have more potential to assimilate.”

Waszczykowski explained that his views were not discriminatory but had been formed while serving as Poland’s ambassador to Iran and a diplomat who travelled throughout the majority of Muslim countries.

“I am saying this with full awareness avoiding any political correctness … Security is more significant than any beautiful ideals,” Waszczykowski said.

But not everyone agrees. Robert Biedron, the president of the city of Slupsk in northern Poland who serves as an independent, presented a different approach towards refugees. He openly said that Poland should take in Syrians fleeing war and committed to organising classes to raise awareness and tolerance and fight back about internet hate speech.

The social media reaction, however, was overwhelmingly negative, with comments discrediting Arab culture and religion.

“What an ignorant. I will never accept Islam in Poland. One has to be insane to invite a foreign culture into our country,” wrote one Facebook user.

Others went further telling Biedron, who is an open homosexual, that groups like the Islamic State openly execute gays.

“Has anybody told Biedron that Muslims are throwing gays in brutal executions from towers? Any idea for a building in Slupsk meeting these criteria?” said another Facebook user.

Yet many Poles feel these kinds of comments do not represent them and are actively fighting against such sentiment.

“When I read such comments on the social media I feel ashamed as a Polish national,” said Agnieszka Kosowicz, the director of the Polish Migration Forum, an NGO devoted to promoting rights of migrants in Poland.

In her opinion, such negative views are largely a result of being exposed to media reports portraying the Muslims mostly in the context of aggression and violence.

“There is absolutely no positive communication about Muslims. At the same time, Poles have no personal relationships with an Arab neighbour country serving as a proof that there are also good Muslims,” Kosowicz said. “This would be critical in helping them to create independent opinions and would serve as a balance to news discrediting Arab culture and Islam. So, there is a huge disproportion in the knowledge we have.”

Marta Gorczynska, a lawyer at the Helsinki Foundation for Human Rights, stressed that Poland has traditionally been a tolerant country. It has a minority of less than 2,000 Muslim Tatars, who have lived in the country peacefully for centuries. Their presence has never been questioned, nor has it generated any fears or discussions.

“The government should strongly oppose any discrimination or stereotypes and inform the society about real facts and statistics. Research shows that average Poles think that we have 10 percent of migrants in Poland, when in fact it could not be more than 0.5 percent,” said Gorczynska.

Asylum and migration opponents also regularly point to economic factors, arguing that refugees would refuse to integrate and rely on state social benefits, or that they would take up the already scarce low-paid jobs, making it harder for Poles from lower economic background to work. But Kosowicz dismissed those fears as “irrational” given that Poland is home to 38 million citizens. The EU calls to accept some 9,000 more people would have a negligible impact, she explained.

Farah said that in order to win people over, the government must stress this and also highlight that these will not be the first foreigners on Polish soil.

“Throughout the years, Poland has been taking in thousands of refugees and no one before was anxious about his job stability due to the presence of those refugees. This debate is simply of a political nature,” said Farah.

In the 90s Poland managed to cope with the influx of around 90,000 refugees fleeing the war in Chechnya and has been receiving between 6,000 and 10,000 applications for asylum in recent years, although very few are ultimately successful.

Poland’s experience with new arrivals has been mixed.

In July 2015, a private initiative, Foundation Estera, organised - with the approval of the Polish government - an arrival of over 150 Syrian Christian refugees. All the refugees Syrians were provided with shelter and financial support, but the spokesperson for the foundation Przemysław Kawalec told MEE that over half of them have already moved to Germany. There are also 21 Syrian refugees held at the Polish detention facilities of the Custom Office, who are not interested in applying for asylum in Poland, the spokesperson of the Custom Office HQ.

The failure of these two groups to assimilate has only fueled sceptics who insist that all sides agree that only wealthier states like Sweden or Germany - which already have large migrant communities - are adept at hosting newcomers. Polish charities, however, say that they see an opportunity and believe that by improving conditions they will be able to help people to integrate. With the first wave of refugees now slated to start arriving next year, Polish society is set to confront these divisions and debates head on. 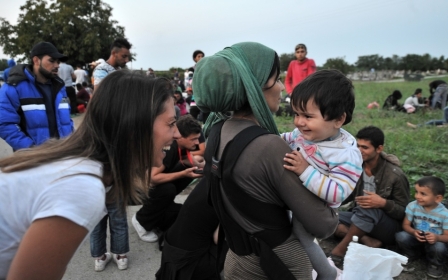