Iraqi President Barham Salih, right, on his first official visit to Iran, calls for 'a new order in the region' (Reuters)
By
MEE and agencies

Iran and Iraq could raise their annual bilateral trade to $20bn from the current level of $12bn, Iranian President Hassan Rouhani has said, despite concerns over the economic impact of renewed US sanctions.

Rouhani's remarks, made after a meeting on Saturday with visiting Iraqi President Barham Salih, came about two weeks after Washington restored sanctions targeting Iran's key oil industry as well as its banking and transportation sectors.

In comments broadcast live on Iranian state television, Rouhani said: "Through bilateral efforts, we can raise this figure [for bilateral trade] to $20bn in the near future.

"We held talks on trade in electricity, gas, petroleum products and activities ... in the field of oil exploration and extraction."

However, Iranian trade officials denied that any food-for-gas scheme could be set up as Iran was a net exporter of food to Iraq.

"The opposite is correct, since Iran provides foodstuffs to Iraq ... We have exported more than $6bn to Iraq in the past seven months, and we could import goods for that amount but not food items," Yahya Al-e Eshaq, head of the Iran-Iraq chamber of commerce, was quoted as saying by the ILNA news agency.

A spokesman for an association of Iranian gas and petrochemicals exporters said Iraq wanted to pay for the gas imports in its dinar currency, the semi-official ISNA news agency reported.

Baghdad is seeking US approval to allow it to import Iranian gas for its power stations.

Iraqi officials say they need more time to find an alternative source than a 45-day waiver granted to it by Washington.

'We will not forget your support'

Salih, who was making his first official visit to Iran, called for "a new order in the region".

"It is now time for a new order in the region that would meet the interests of all countries in it," Salih told a Tehran news conference, according to a translation provided by Iran's state broadcaster.

"We believe Iran has an important role to play in this new order.

"It will be important to create free trade zones at our shared border and to connect the two countries' railways.

"We will not forget your support for the Iraqi people in the fight against [Iraqi president] Saddam [Hussein]. Neither do we forget Iran's stand in the recent fight against terrorism."

Iraqi central bank officials said in August that their country's economy was closely linked to Iran.

The goods element of Iranian imports to Iraq was worth about $6bn in the 12 months ending March 2018, or about 15 percent of Iraq’s total imports for 2017.

Meanwhile, workers at Iran's oldest sugar-cane company went on strike on Saturday over unpaid wages, calling for the troubled factory to be nationalised, the semi-official news agency ILNA reported.

ILNA published a photo of a rally by workers from the Haft Tapeh company in Shush, southwestern Iran, showing women marching with their children, one holding a sign saying: "We are hungry."

Haft Tapeh employs about 4,000 workers and was established in 1962, the AFP news agency reported.

Workers have staged numerous rallies over delayed wages and unpaid pensions since the company's privatisation in February 2016, with protests increasing in recent weeks.

"We call on this hard-working class to get back to work before the products go to waste," said Yadollah Mehrali-Zadeh, deputy governor for Khuzestan province where the company is based.

"The government is trying to pay two to three months of their delayed payments in the upcoming week," he added, according to the official IRNA news agency.

Iran has in recent months seen many strikes and protests over working conditions and unpaid wages in a number of sectors, including steel, education, mining and transport. 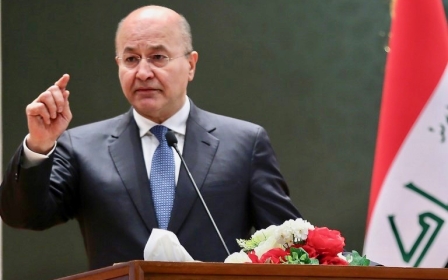 US Sanctions
Iraq urges US to consider its political, economic position in talks on Iran sanctions