Food prices have doubled, cholera is spreading and millions are starving. It may only be the beginning for Yemen's beleaguered population 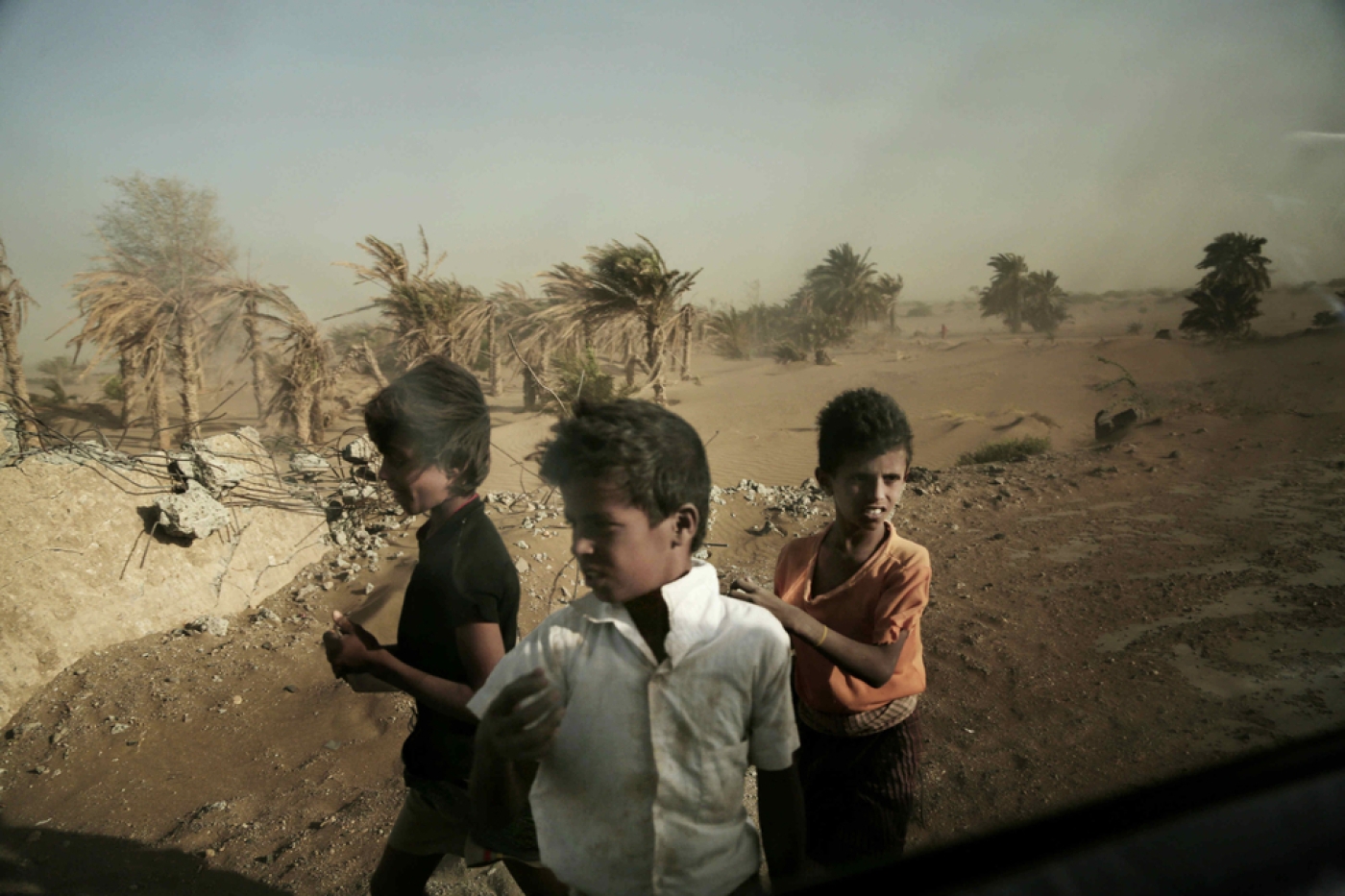 Homeless children stand on the road in Hodeidah, Yemen. (AP)
By
MEE correspondent

HODEIDAH, Yemen - Every day Murad Morie watches trucks laden with food pull out of Hodeidah’s port. None of their cargo is for the 43-year-old and his family of nine, though.

Instead, the trucks head to other Yemeni cities and provinces, while the people of Hodeidah suffer as some of the hardest hit by Yemen’s catastrophic three-year war.

Morie and his family are from Hodeidah's outskirts, but have been displaced by a Saudi-led assault on the city that pushed them from their home near the airport to the Houthi rebel-controlled city centre.

Not only has the fisherman lost his home due to the Saudi-led assault, but since June the coalition has prevented fishermen taking to the water, as part of an attempt to stifle the city with a blockade.

That has meant most fishermen like Morie have had their only source of livelihood cut short. Others risk their lives to keep fishing. Some lose them.

Morie, who is illiterate, is out of options. He and his family are just 10 of the 14 million Yemenis on the brink of famine.

This struggle to make a living began after the Saudi-led coalition intervened in 2015 in an attempt to prop up the government of President Abd Rabbuh Mansour Hadi.

In the three years since, Yemen’s economy has collapsed, with the rial plunging in value.

A Saudi bombing campaign has killed thousands of civilians as it battles the Houthis, including 40 children who were hit by an airstrike while travelling on a school bus.

Cholera has become a persistent problem, as a lack of clean water has helped spread the infection to hundreds of thousands of Yemenis across the country.

And thanks to a Saudi blockade, the destruction of much infrastructure and rocketing prices on basic goods, Yemen is close to witnessing the worst famine seen worldwide in 100 years, according to the United Nations.

Hodeidah, a highly strategic port city on Yemen’s Red Sea coast, is the entry point for at least 70 percent of the country’s imports – including food.

"I see trucks laden with food leave the seaport every day towards Sanaa and I hope to have some food, but have no money to buy it," Morie told Middle East Eye.

"As a last resort, I am sorry to say that I beg people to help me buy some food for my children."

The thin man with the dark skin could not hold back his tears as he told his story. He said no one in this world hopes to beg, but "the war has forced us to".

When Morie and the many others like him struggling to provide food for their families do manage to cobble together some money, the prices of many basic goods can be prohibitive.

This week, Save the Children said goods such as flour, rice, salt, sugar and cooking oil have seen their prices almost double since the war broke out in 2015.

"Sometimes we only eat one meal a day and my children sleep hungry. I can hardly buy enough food to keep my children alive and I cannot buy fruit, vegetables or meat, so my children are getting thinner," he said.

In recent months, Hodeidah has become the hottest front in a largely gridlocked conflict.

Most Yemenis with the means to do so have fled the city on the Red Sea coast, leaving only those like Morie who cannot pay for transportation out, and have nowhere else to go.

“I was just about able to find a house in the city and I don’t have shelter elsewhere, so I haven’t left. We live amid war and hope that [aid] organisations can help us,” he said.

Aid organisations have been able to help allieviate the suffering of some, but according to Morie it just hasn’t been enough.

"We received soap and blankets from some organizations, but there is no one that provides us with enough food,” he said.

As his children rapidly lose weight and show signs of malnutrition, Morie’s neighbours have urged him to take them to hospital. But he can't. He doesn't have the money.

For four-year-old Nashwan Mukhtar it is a similar story. He’s suffering from malnutrition, and though he has been treated at a Hodeidah hospital, his bones can still be seen jutting out through his skin.

Nashwan is smaller than any four-year-old should be, and finds it difficult to speak.

His father, Reslan Mukhtar, works as a motorcycle courier and earns no more than 1,000 Yemeni rials ($1.5) a day, not enough to buy milk and fruit for his seven children.

"Nashwan was born at the beginning of the war and daily incomes have reduced because of the fuel crisis and the increase of prices. So I could not buy milk for Nashwan," he told MEE.

"Nashwan did not get breastfed because my wife herself couldn’t get proper food and I hardly ever managed to buy bread, rice and beans. Now the result is my child suffers from malnutrition."

Nashwan is the youngest of the children, but he is not the only one that suffers from malnutrition - his siblings suffer from it too, to different degrees.

"The situation is worsening every day because the prices are increasing and we cannot afford to buy food for our children,” Mukhtar said. “[Aid] organizations do not help with proper food."

With no solution on the horizon – rather, the promise of an uptick of violence as the pro-government forces close in – families such as this one can only resort to praying.

"We are facing our destiny and pray to God to help all needy people like me, as he is the only one that can help us in this situation."

As malnutrition becomes more prevalent, diseases and infections are spreading.

According to Dr Firdous Monasar, who works in Hodeidah, since the Saudi-led coaltion’s offensive on the city began in June the number of cholera cases has spiked heavily.

"Residents of Hodeidah are the poorest in the country and they barely get any food to eat. The recent battles forced them to flee their houses and live in dirty environments, sometimes outdoors," Monasar told MEE.

"The recent battles and increase of prices left more hungry people, more IDPs [displaced people] live outdoors and this means more diseases spread among them because they do not get the proper food that helps their bodies resist diseases."

Some aid organizations are providing hospitals in the city with medicine, she said, but it is important that people are given food, because prevention is better than a cure.

"I believe hunger will continue to spread in Hodeidah because of the currency’s collapse and the ongoing war," she said.

Between June and August, Save the Children-supported health facilities across the Hodeidah governorate recorded a 170 percent increase in the number of suspected cholera cases, from 497 in June to 1,342 in August.

According to the World Health Organisation, 30 percent of all suspected cholera cases are children under five years old.

The number of beggars on Hodeidah’s streets has been increasing dramatically, and you can find men, women and children moving from shop to shop asking for help.

According to Abdul Salam Ismail, a social worker in Hodiedah’s social affairs office, most residents used to depend on farms and fishing, but the war has deprived them from their work.

"The farms are in conflict zones and fishing has been forbidden by the Saudi-led coalition, so this doubled the suffering of Hodeidah residents and we started to see more people begging in streets," Ismail told MEE.

"The suffering of Hodeidah's residents is incredible, as people only seek bread and rice, and many families do not eat fruits, vegetables or meat."

Ismail said that famine has already spread in Hodeidah, but the percentage of people affected is not clear yet because aid workers cannot reach all families that suffer from starvation.

"The famine spread in the outskirts of the city that became conflict zones and we cannot reach them. But I call on INGOs to intervene and help families in conflict zones where diseases kill people," he said, adding that Hodeidah should be a priority to aid organisations and all parties that can help hungry people.

The UN estimates that around 22 million people, three-quarters of Yemen’s population, are reliant on humanitarian aid.

Jan Egeland, head of the Norwegian Refugee Council and UN advisor, warned earlier this month that famine was imminent.

"Civilians in Yemen are not starving, they are being starved. Let it be known that the worst famine on our watch is wholly manmade by Yemen's conflict parties and their international sponsors," he said.

"The way the war is waged has systemically choked civilians by making less food available and affordable to millions of people."

"Parties to this conflict already have blood on their hands and now risk bearing responsibility for a famine affecting millions," he added.

For Hodeidah residents like Morie, all they can do is hope the warring sides reach a peaceful solution and stop the war, as it lies behind their suffering.

"Before the war, me and my neighbors used to help each other, but now all of us need assistance as the war has turned us from fishermen to beggars," Morie said.

"I hope that warring sides approach a political solution and we can resume our work."