Raid on community college-turned-prison could see 150 dead, including detainees the Yemeni government wanted to exchange with the Houthis 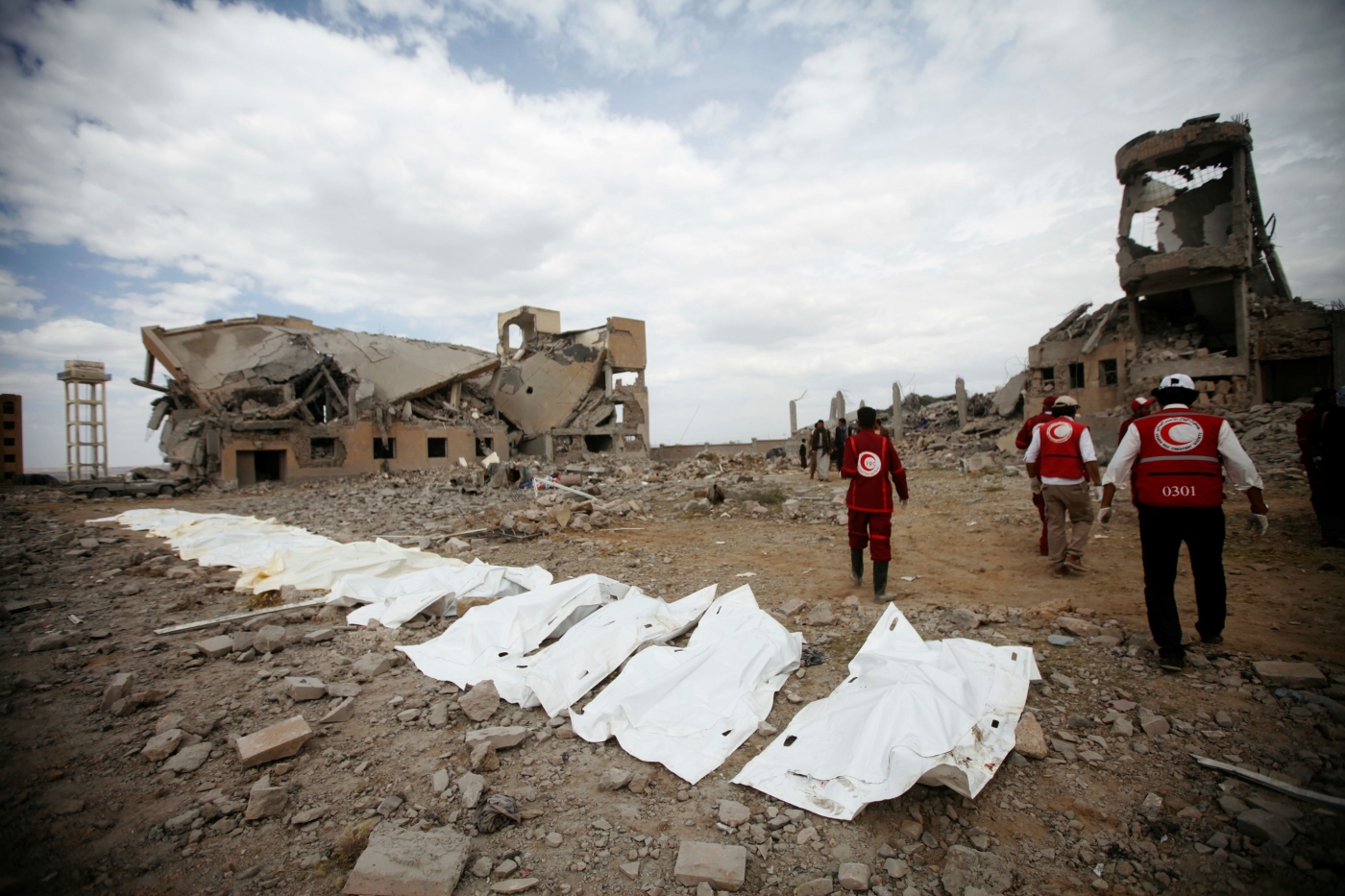 Red Crescent medics walk next to bags containing the bodies of victims of Saudi-led air strikes on a Houthi detention centre in Dhamar, Yemen (Reuters)
By
MEE correspondent
in
Sanaa

A source in the Dhamar health office told MEE that the prisoners were spread across three buildings in the college.

"The three buildings were hit and there were 185 prisoners inside them, and all of them were either killed or injured," the source told MEE. "When the Saudis hit a building with an air strike, it is certain that everyone inside it will become a casualty."

'We do not use bulldozers because this will kill the injured ones, but we are looking for them by digging with our hands'

Some dead bodies and wounded prisoners are still under rubble, the source said, and teams from the health office and aid volunteers are looking for them carefully.

"We do not use bulldozers because this will kill the injured ones, but we are looking for them by digging with our hands," he said.

He said that in addition to 185 detainees, the prison's guards were among the killed and wounded, and confirmed that more than 100 dead had so far been counted and many survivors were in critical condition.

"In the coming hours, the number of dead will exceed 150, as most of the wounded people suffer from critical wounds and they cannot receive proper healthcare in Dhamar or Sanaa," he said.

"The destruction of the medical system is another Saudi crime, as injured people cannot receive proper healthcare."

Officials from the health ministry and some international NGOs have commonly visited the prison to aid the detainees, the source said, adding that it was known not to be a military site.

Franz Rauchenstein, head of delegation for the ICRC in Yemen, confirmed to the AFP news agency the number of dead.

"We estimate over 100 people were killed," he said, adding that despite efforts to find survivors beneath the rubble, the chances of finding them "are very low".

In a statement carried on Saudi state television, the coalition claimed that it had launched air strikes on a number of targets in southwest Yemen, destroying a site storing drones and missiles in the city.

However, the Dhamar health office source rejected this.

"These buildings used to be a college and it was turned into prison, so both are not a target for the coalition and this is a crime against humanity," he said.

'The crime is deliberate, amounting to a war crime'

Warplanes continued to hover over the area, sources told MEE, leading those involved in the rescue operation to fear that they will be victims of a "double-tap" strike, should jets bomb the site again.

Lawyer and human right activist Tawfik al-Hamidi, the head of SAM Organisation for Rights and Freedom, said on Twitter: "There is no justification for the coalition to bomb the community college that the Houthi group has turned into a prison for opponents. The coalition knows, as organisations and activists know, that it is a harsh prison for opponents: politicians, journalists and others. The crime is deliberate, amounting to a war crime."

Ibrahim Alwan, a resident of Dhamar city, told MEE that dozens of dead and wounded had been sent from the college to al-Thawra Hospital.

"Patients in al-Thawra Hospital aren't receiving treatment for normal illnesses, as all the doctors are busy relieving the wounded people coming from the college. Many of them suffer from critical wounds," Alwan said.

Mohammed al-Boukhaiti, a member of the Houthis' political council, said on Facebook that some of those detained in the college had been on the list of prisoners Yemen's government had wanted freed as part of an agreement between the warring parties brokered by the UN in Stockholm. In a tweet, the International Red Cross said it was providing 200 body bags and enough medical supplies to treat 100 critically wounded people.

The Western-backed coalition intervened in Yemen in 2015 after the Houthis ousted the internationally recognised government of President Abd Rabbuh Mansour Hadi from power in Sanaa in late 2014.

Cracks have begun to show in the coalition, particularly between Saudi Arabia and its ally the United Arab Emirates, which have backed militias that have subsequently come to blows in recent months.

The Houthis, meanwhile, control the major population centres and have stepped up cross-border missiles and drone attacks on Saudi Arabia in recent months, hitting an airport and a major oil field in the past few weeks alone.

The coalition, whose rights record has been decried by international rights groups, said it had taken measures to protect civilians in Dhamar, claiming the assault complied with international law.

The United Nations has sought to ease tensions between the groups and prepare for peace negotiations in a war that has killed tens of thousands and pushed the country to the brink of famine.

While the conflict is widely seen in the region as a proxy war between Saudi Arabia and Iran, the Houthis, who deny being puppets of Tehran, claim to be fighting against a corrupt system.