Saudi dissident vows to 'keep fighting' after year of intimidation, arrests and murder

His brothers were jailed, his phone was hacked and his friend was killed - all in 2018. But Omar Abdulaziz says struggle must go on 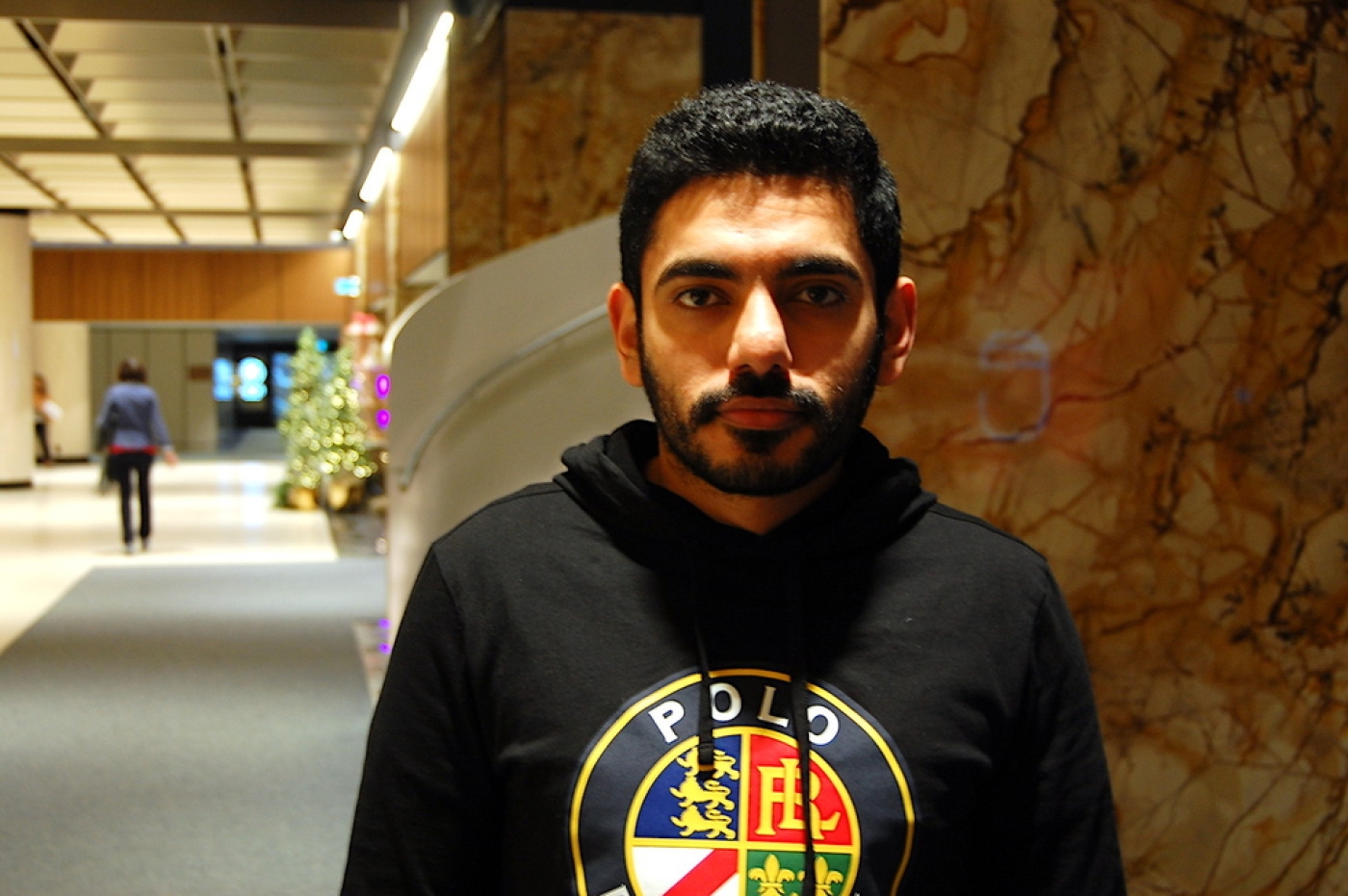 MONTREAL, Canada - Omar Abdulaziz says "it could have happened" to him.

The Saudi dissident knows he came close to the fate that befell Jamal Khashoggi, the Saudi journalist who was murdered inside his country’s Istanbul consulate in October.

Months earlier, two Saudi government agents came to Montreal, the Canadian city Abdulaziz has called home for almost a decade, to convince him to return to the Gulf kingdom.

“They said, ‘We have a message from MBS,’” said the Saudi activist and online commentator, referring to the country’s powerful leader, Crown Prince Mohammed bin Salman.

In a busy hotel restaurant in downtown Montreal this month, the 27-year-old maintained his resolve as he recounted his interactions with the Saudi state agents, describing their conversations as though they were as normal as ordering the latte in front of him.

I said, thank God… Maybe I would be the first [to be killed], who knows

In an interview with Middle East Eye, he said the men told him they were working for Saud al-Qahtani, one of the crown prince’s top advisers, who has since been accused of orchestrating Khashoggi’s brutal killing.

“He’s our mentor,” the officials said of Qahtani, Abdulaziz recalled.

They told him MBS liked him and wanted him back in Saudi Arabia, he told MEE. “I said, ‘OK thank you’, but I didn’t buy it.”

When he refused their offer, he said they tried to get him to visit the Saudi embassy in Ottawa to pick up a new passport instead.

Khashoggi had gone to the Saudi consulate in Istanbul, where he was killed, to pick up personal documents that would allow him to marry his Turkish fiance.

At the time, Abdulaziz didn’t think much of their asking him to visit the embassy. At worst, the staff might insult or curse at him, he thought.

He never went to Ottawa – a decision he now knows may have saved his life. “I said, thank God… Maybe I would be the first [to be killed], who knows.”

Speaking out and building an audience

Still, to fully understand how Abdulaziz came to be courted by Saudi government agents thousands of kilometres from his native home, one needs to go back nearly a decade.

That’s when Abdulaziz first came to Canada to study English. Not long after his arrival in 2009, he decided to pursue a bachelor’s degree, and so he began studying at a university in Quebec, the French-speaking province in the country’s eastern half.

His outspoken activism started in earnest in 2011. It was the early days of the Arab Spring and popular uprisings began to sweep through North Africa and the Middle East, uprooting longstanding dictators one by one.

A contagious push for change and freedom was in the air, and Abdulaziz jumped on board, using Twitter to discuss politics and other issues affecting the lives of the citizens of Saudi Arabia.

"I didn’t call for a change of the regime - never," said Abdulaziz.

However, as his following grew online, he was told his Saudi government scholarship to study in Canada was being pulled.

“I was vocal. I started to criticise the regime, the royal family … they weren’t happy with my activities,” he said.

It was 2013 and Abdulaziz could read the writing on the wall. “They left me with no option,” he said, looking back.

He applied for and was granted political asylum in Canada in February 2014 – and under the protection of his new immigration status, he launched a YouTube show, using humour to tackle political issues.

His following grew even larger.

Yet Abdulaziz says the real turning point came in 2015 when Salman bin Abdulaziz Al Saud was named the king of Saudi Arabia.

Crucially, King Salman brought with him a new figure who would quickly wield a far-reaching influence over Saudi Arabia’s domestic and foreign policies: his son, MBS.

As the young prince quickly positioned himself as the kingdom’s de facto ruler, he launched the war in Yemen, jailed dissidents, imposed a blockade on one-time ally Qatar and rounded up clerics, royals, activists, and anyone he saw as a threat to his control over the country.

MBS is “a dangerous guy” whose actions are unpredictable, Abdulaziz said.

So as the kingdom’s policies grew more brash under the crown prince’s leadership, Abdulaziz said his voice grew louder – and his audience became larger still.

A report and a hacked phone

Earlier this year, global management consulting firm McKinsey & Company prepared a report that outlined how some of the kingdom’s policies were viewed by the public.

The report, whose "primary audience" the firm said was internal, singled out three social media accounts “who drove often negative conversations on Twitter”.

One of those accounts belonged to Abdulaziz, who has racked up 350,000 followers on Twitter alone.

“They didn’t say arrest him or kill [them], but what do you think [will happen] when you are giving such a thing to an authoritarian regime?” Abdulaziz said.

The use of spyware to target Omar Abdulaziz was one component of a broader campaign of repressive, punitive activities undertaken by a government in an effort to silence critics

After a New York Times article in October referenced the McKinsey report and its impact on Saudi dissidents, the firm said it was "horrified by the possibility, however remote, that it could have been misused in any way".

“If you just think about that document for a minute, it talked about collectively, I think it was about 800,000 [followers],” Sneader said in an interview with The Australian Financial Review on 17 December.

“The idea that [the report] was how any government would find out about the activities of people who happen to express a view contrary [to the government] is hard to imagine,” he said.

But Abdulaziz said the report had a serious impact on his life and the lives of the people closest to him. Two of his younger brothers have been jailed in Saudi Arabia since August, he said, while other family members and friends have been barred from leaving the kingdom.

He said he also no longer speaks to his parents because his phone was hacked in summer 2018, as the Citizen Lab, a research group at the University of Toronto, reported in early October.

Citizen Lab said it had “high confidence” that Abdulaziz’s cell phone was infected with spyware from Israeli company NSO Group’s Pegasus by an operator “linked to Saudi Arabia’s government and security services”.

"The use of spyware to target Omar Abdulaziz was one component of a broader campaign of repressive, punitive activities undertaken by a government in an effort to silence critics," the group said.

Abdulaziz sees a connection between McKinsey's report on Twitter users and the hacking of his phone, which he said happened only months later. He told MEE he is consulting a lawyer about possibly suing the firm.

“They have to pay the price for what happened. Consulting [for] an authoritarian regime and giving them such a document, what are you expecting?”

‘We have to keep fighting’

Whoever hacked his phone would have had access to more than 400 text messages between Abdulaziz and Khashoggi, as the pair developed a friendship after the prominent journalist left Saudi Arabia last year.

A Saudi government insider-turned-critic and prominent columnist for the Washington Post, Khashoggi was murdered in his country's consulate in Istanbul on 2 October.

The murder involved key advisers to the Saudi crown prince - including Qahtani, whose alleged mentees visited Abdulaziz in Montreal and tried to convince him to return to the kingdom.

While Saudi officials have repeatedly denied the Saudi crown prince had anything to do with what happened to Khashoggi, the CIA concluded that MBS ordered his murder, while the US Senate also unanimously said it believes that he was behind the assassination plot.

I’m not really scared, but I’m really worried about the people of my country, that’s it. It’s not about me anymore

Abdulaziz said he spoke to Khashoggi nearly every day before his death. The pair shared details about their personal lives and professional goals, including their work on social media and hopes for reforms back home.

“He was missing his kids and I was missing my parents, so that’s why we built this kind of relationship, like between a son and father,” he said.

Khashoggi’s brutal death was initially a shock, Abdulaziz said, but it has since served as a motivator for him “to speak louder and to act stronger”.

"Jamal sacrificed himself for us," he said, once again remaining stoic.

"I’m not really scared, but I’m really worried about the people of my country, that’s it. It’s not about me anymore. I’m protected here, but it’s about the people that live there: my friends, my family members,” he said.

In the end, Abdulaziz said he’s certain things will change in Saudi Arabia – and that he’ll soon be able to return.

Asked if he must remain hopeful to do the type of work he does, Abdulaziz answered no, without hesitation. "But you have to read history [and] history repeats itself," he said.

"MBS, he’s a dictator, but of course, he’s not going to be the worst one in history. We’ve had so many devils in this world, in this life…

"We have to keep fighting."