Syrian government forces and their allies have continued to pummel towns and villages in the northern Idlib province despite the beginning of Turkish monitoring patrols along an agreed buffer zone on 8 March.

One of those targeted, the village of Jarjnaz, is now deserted, with only about two percent of its population remaining in the surrounding farms.

The obliteration of the village came despite its location next to a Turkish observation post.

Hussein al-Daghim, former director of the local council in Jarjnaz, said that the people of his village needed real protection against Syrian and Russian air strikes.

"Most of the displaced people are scattered in the small villages around the town, and they will return immediately after the shelling stops," he told Middle East Eye. "We have previously demanded full Turkish protection, not only to stop military bombardment, but to help the civilians rebuild the region and move the economic wheels."

Monitoring patrols are an important part of the Sochi agreement signed in late 2018 between Russia and Turkey, with the aim of preventing a long-mooted government assault on Idlib province, the opposition's last enclave.

To keep Syrian government forces and rebels apart, a demilitarised zone was drawn along the frontlines, ring-fencing the rebel bastion.

However, since Friday, artillery and missile bombardments have targeted the route of the Turkish monitoring patrol, especially the villages of Saraqib and Jarjnaz, as well as the city of Khan Sheikhun and areas in the de-escalation zone.

Russian air strikes killed at least 13 civilians, including six children, in Idlib province on Wednesday,  according to a UK-based activist group.

The Syrian Observatory for Human Rights said around 60 people were also wounded in the air strikes that struck several areas in the province.

"Over the past 24 hours Russian aircraft have carried out dozens of raids targeting several regions in Idlib province, including the city of Idlib and the town of Saraqeb," Observatory head Rami Abdel Rahman told the AFP news agency.

Residents told Reuters on Wednesday that Russian planes had conducted at least 12 aerial strikes on residential areas in Idlib city, including a civilian prison on its outskirts, where they said dozens of prisoners escaped.

On Wednesday morning, jets struck a camp for the internally displaced in the village of Kafr Amim near Saraqib.

The attack killed two and wounded at least 19, according to Turkey's Anadolu news agency.

The Russian defence ministry said HTS had planned to use the drones and weapons to attack a Russian air base in Hmeimim in the Latakia governorate.

Part of the deal involved a commitment to removing members of HTS and other fighters from the de-escalation zone.

That appeared to be largely adhered to. However, things were complicated in January when HTS seized control of the vast majority of Idlib province, subjugating rival Turkish-backed armed groups in the process.

There are fears that the Syrian government will use HTS's dominance as a pretext to stage a full-on assault on Idlib.

Daghim, however, was confident that Turkey would stave off such an operation.

"I don't think Turkey will abandon Idlib," he said. "The latest pretext for bombing is due to the absence of Turkish steps to counter the influence of [HTS], so Russia is pushing government forces to bombard Idlib to pressure Turkey."

The Response Coordinators Group (RCG), a local civil society organisation, said the number of people displaced from the de-escalation zone was about 90,000 civilians. RCG's director Mohammed Hallaj told MEE the number of displaced people from the region was escalating as a result of continued attacks.

Ziad Abboud, head of the Civil Defence in Khan Sheikhun, said the city had been targeted almost daily since early February.

"Most public and private properties in the city have been bombed - the houses, mosques, orphanages, bakeries," he said.

Turkey's Cumhuriyet newspaper reported on Monday that a meeting was set to take place between Russian and Turkish foreign ministers to discuss the situation in Idlib province.

According to a local news agency and well-placed source, a Russian-Turkish meeting was held on Sunday behind the front lines between the areas under control of the Kurdish People's Protection Units militia (YPG) and the areas of control of the Turkish-backed Syrian National Army rebel grouping near the city of Azaz, north of Aleppo.

The outcome of the meeting was not officially announced, but it is believed to have been related to the opening of the commercial highway from Aleppo city through the town of Tal Refaat and the city of Azaz then to the town of Bab al-Salama down to the Turkish crossing of Oncupinar, which was recently reopened by Turkey after eight years of closure. 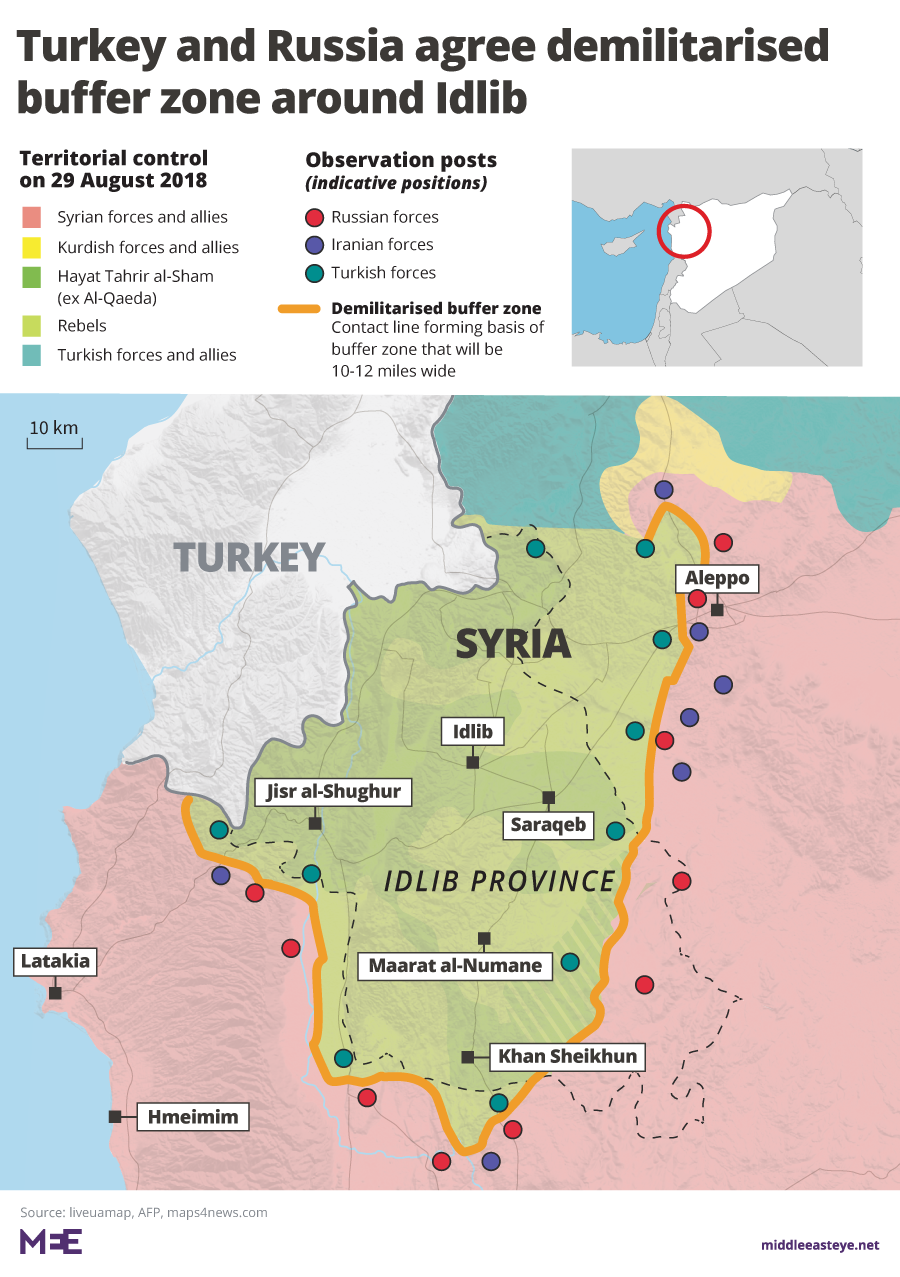 Following the end of the meeting, the demilitarised zone witnessed a campaign of heavy shelling.

The contents of the meeting were not disclosed by MEE's source.

"From the outset, we have announced the endorsement of the Sochi agreement with all its provisions, to spare Idlib and about four million people any ground military incursions," said Naji Mustafa, a rebel spokesman.

"Civilians in Idlib were disappointed. As the shelling continued, the Turkish monitoring patrol did not complete its operation after Friday, but surveillance patrols on a daily basis may require further preparations."

He said that Turkish military patrols come in the context of the implementation of the Sochi agreement and there would be rebel forces in all areas Turkish troops patrol. Daghim said that with the bombings ongoing, the current number of Turkish troops patrolling was not enough.

"I think that a lull will not take place until there are Turkish patrols in the entire de-escalation zone," he said.

The continuing bombardment of Idlib has alarmed aid organisations, who fear a potential human catastrophe if there is a severe escalation of the conflict.

According to Islamic Relief, Idlib's camps for the displaced are currently home to more than 190,000 people, and the group has warned that they "are bursting at the seams", with services failing due to aid drying up.

“There are grave shortages of food and medicine and families continue to be displaced at a shocking rate. Some families have been displaced 10 times or more during the eight years of crisis, and some 40,000 had to pick up and leave again just last month in the Idlib region," said Nasser Haghamed, CEO of Islamic Relief.

“Every time a family has to move due to security risks, or because they do not have access to the most basic of services, they become poorer as well as more at risk of abuses like child marriage and forced recruitment by armed groups.

"Children often have to drop out of school, while the rest of their families struggle to get jobs and are torn apart from their support networks."