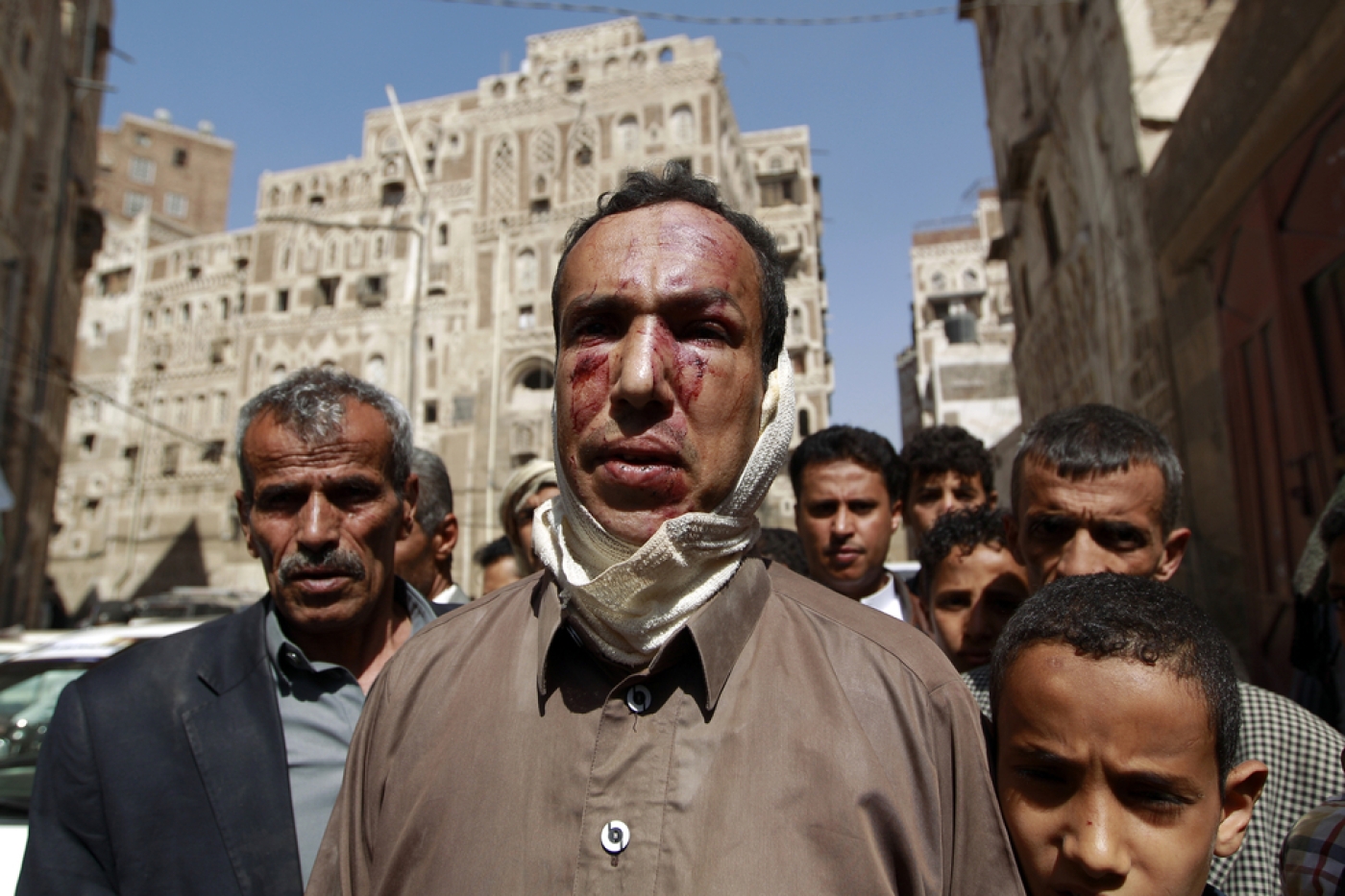 SANAA - “They deprived me of my sons,” Khadija Al-Bayna told me. “They were our breadwinners; now I don’t know whether I should be crying in mourning or because I no longer know how we will pay for tomorrow’s meal.”

Mohammed and Ahmed died two days earlier, killed by an airstrike that hit the Al-Sham water-bottling plant, where they had been working for two years. They were minutes away from finishing their shift for the day.

The plant was located deep in the Hajjah desert province, off Yemen’s western coast. As most of the locals have been pointing out in the days since, it was the only business outlet of note for miles around.

In total, 12 families lost at least one son to the airstrike. The Al-Baynas lost two, both of who were their breadwinners and livelihood. The strike was the latest episode in a six-month air campaign by a Saudi-led coalition of Sunni Arab states who have been trying since March, with mixed results, to defeat the Houthi militiamen who seized the capital, Sanaa, more than a year ago.

From the very start, the military campaign has had an unquestionably sectarian character to it. Saudi Arabia’s stated objective has been to roll back the gains secured by Zaidi Shia Houthis in the past year and reinstate the rule of Yemen’s deposed president, Abdu Mansour Hadi, who fled to Riyadh in March as the Houthi insurgency pursued him to the port city of Aden.

As in most conflicts, civilians caught in the middle have had to bear the brunt of the cost, with thousands falling victim to indiscriminate targeting - whether from coalition airstrikes or heavy weaponry shelling by the Houthis. While estimates vary, many believe the death toll for the first six months of the coalition campaign has already surpassed the 4,500 mark.

“That’s it! Everything is gone, the business, the people,” the plant manager, Mohammed Al-Razoom, cried as he walked us around what was left of his factory in Hajjah, a desolate landscape of burnt bottles and machinery.

Speaking to Reuters, the coalition commander, Saudi Brigadier General Ahmed Asseri, insisted that the plant was not a bottling factory but had been used by the Houthis to make explosive devices.

When asked about Asseri’s comment, Al-Razoom picked a water bottle up and cried in dismay: “These are the weapons and missiles the Saudis are targeting?”

'There is absolutely no one helping us'

Now, a few kilometres away from the site of the strike - on the outskirts of Hajjah’s Beni Hassan district - shanty tents sprawl across the desert expanse, a makeshift Internally Displaced People (IDP) camp housing thousands of people who had fled their homes.

Most say they’re seeking a place of refuge from the violence, but, in truth, such a place no longer exists in Yemen. On the day we visited the camp, four airstrikes struck; the force of their impact lifted everyone off the ground and threw them a few feet away.

“We thought we would be safe here, but the airstrikes follow us wherever we go,” Khadija Ahmed, who had fled to the camp with her husband and four children, told MEE.

“At least at home we had food, we had our farmland, we had our goats. Here, we are starving. There is absolutely no one helping us.”

Despite the ferocity of the bombing campaign, a bigger burden on the country’s civilians has been the blockade imposed by the coalition since March. While this is officially aimed at cutting-off arms supplies to the Houthis, the blockade has had a disastrous impact on a civilian population relying on imports for 90 percent of its staple food needs.

According to the UN, Yemen is now on the brink of famine yet this continues to be one of most underfunded – and underreported - humanitarian crises in the world.

Meanwhile, the mood in Sanaa, which had been relatively calm for weeks, was soured by news of the killing of 45 soldiers from the UAE by Houthi forces near Marib, 120km to the east of the capital.

“Sanaa will pay the price tonight!” a distraught Sanaanite friend predicted when we received the news. Ominously, we heard coalition jets roaring above us moments later - a terrifying sound - especially when one knows the jets can, and will, strike at any moment.

Airstrikes by the UAE air force were predictably ferocious, striking targets in Sanaa but also in Marib and the Houthis’ stronghold, Saada. The civilian death-toll reached over 30 casualties that night alone. The cycle of violence had been the same for weeks: every time the Houthis engaged in fighting against coalition ground troops in Marib, or at the Saudi border, civilians all over Yemen braced themselves for the inevitable, seemingly indiscriminate, retaliatory airstrikes by the coalition.

Needless to say, the coalition’s repeated assurances that its air campaign has been strictly confined to high-precision targeting of military Houthi positions have been invariably greeted with a great deal of scepticism by most Yemenis.

The scepticism seems amply justified: In the past six months of fighting alone, coalition airstrikes have hit a busy marketplace, IDP camps, residential complexes, the port of Sanaa as well as the Old City (a UNESCO world heritage site) to name but a few.

The next morning, we went on a tour of civilian areas that had been hit by overnight airstrikes, including two apartment complexes and a university building in Sanaa. One of the apartment complexes was home to a Syrian family that had fled their own civil war two years earlier. “The airstrikes followed them from Syria to Sanaa; it’s Qadar (divine fate)!” exclaimed the buildings’ owner as he surveyed the heap of rubble where his building used to stand; teddy bears and charred laundry still visible among the rocks and dirt.

As we drove through Sanaa, the city was unrecognisable. The town’s famous Diplomatic Quarter was now a ghost town; unsurprising considering its location at the foot of the Faj Attan mountain, which has seen the most intensive bombings of the air campaign.

Nearby, a school was closed: it had been hit twice. The longer we drove, the more it became evident that this was the fate of most of the town’s civilian infrastructure: Dozens of schools, homes, shops, and restaurants were all hit by either coalition airstrikes or Houthi shelling. At site after site, devastation had descended everywhere. Meanwhile, the stories of the residents kept coming; an endless flow that was both compelling and overwhelming.

Reaching the Old City, we discovered it was also hit; at the time of our visit the Saudi coalition denied it was responsible for the airstrike that hit the site but only days after we left it was hit again - airstrikes killed 15 civilians from three families and left two gaping holes at the centre of what used to be an area of picturesque serenity.

Human rights groups have been vocal in insisting that the Saudi-led coalition airstrikes amount to war crimes. According to the UN, more than a thousand civilians are believed to have died as a result of the strikes alone, a number which continues to rise steadily yet has, so far, generated little international attention or outrage.

Last week, the UN Human Rights chief, Jordanian Prince Zeid Ra'ad al-Hussein, called for an independent inquiry into violations, both by coalition and Houthi forces. He also welcomed plans announced by President Hadi, who has returned to Aden, at least briefly, to “investigate all violations”. Several international human rights organisations, however, promptly expressed doubts over whether a government in exile, one utterly dependent on political and military Saudi patronage, can be trusted to conduct an impartial inquiry.

In the meantime, the coalition’s relentless bombing campaign continues to fuel popular anger and resentment against Saudi Arabia and its allies, including Western arms exporters such as the United States and the United Kingdom. The UK, in particular, has been one of the leading arms suppliers to Saudi Arabia, granting the kingdom 37 export military licenses since the beginning of its Yemeni campaign in March.

“The UK Government is quietly fuelling the Yemen conflict and exacerbating one of the world’s worst humanitarian crises, potentially in breach of both domestic and international laws on the sales of arms," Oxfam said in a statement earlier this month.

The legal framework governing the arms trade prohibits deals where there is a clear risk that weapons might be used to commit war crimes or human rights abuses. Human rights groups have accused the Saudi-led coalition of potential war crimes, pointing to a pattern of airstrikes in civilian areas that included no obvious military targets.

Concerns over the effectiveness and rationale of the coaliton’s strategy extend beyond human rights considerations.

Prior to the start of the campaign, the United States’ main fight in the region was its decade-long counter-terrorism effort against Al Qaeda in the Arabian Peninsula (AQAP). However, many believe the current campaign has not only strengthened AQAP but also provided the catalyst for the emergence of an Islamic State group offshoot in Yemen.

The latter is now openly competing with AQAP by launching its own offensive against Yemen’s Zaidi Shia community, including an attack earlier this month on a Houthi mosque that killed 20 people.

“The first bomb wasn’t so bad,” Mohammed, one of the survivors, told MEE. “At first, we didn’t realise it was a suicide bomber, but as we all gathered to rescue the injured I became suspicious of a car parked outside. I screamed for everyone to run but the bomb blew up before most could do so.”

As he spoke, Mohammed picked up a ball-bearing from the ground – a macabre remnant of the suicide-bomber’s vest – holding it in his hand. “This is all Saudi Arabia and America’s doing,” he cried. “They brought this to us. We used to pray in peace and safety. Now we pray knowing we might not return home.”

According to the UN, 80 percent of Yemen’s 25 million inhabitants are today on the brink of famine. In a visit to the Al-Sabeen hospital in Sanaa, we met Randa Ahmed, a young mother holding her two-year-old boy, Hameed.

“They tell me to eat well so I can breastfeed him. But with this crisis, my husband is stuck at home and we just cannot afford food.” That morning, her son desperately needed oxygen but, because of the blockade, the hospital had no basic supplies on its premises. Hameed made it through that day but Randa had to be sent home two days later; the hospital had been forced to close down.

Amidst the mayhem and desperation, there are sadly no indications things will improve anytime soon. The coalition forces and Hadi loyalists are currently conducting military training exercises in Marib, in preparation for a ground offensive on Sanaa. This presages dark days, possibly weeks or months, ahead for a population already facing calamitous food and medicine shortages.

As we prepared to leave her, Khadija Ahmed held her remaining three children tightly towards her and whispered, “I wish an airstrike would just kill us all - all of us - in an instant! As least I wouldn’t have to see them afraid and hungry anymore.”

As she spoke, her son suddenly looked up to the sky, a terrified look spreading across his face: the airplanes overhead had returned. 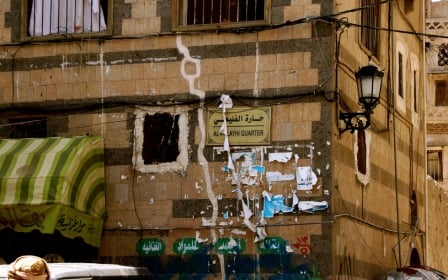 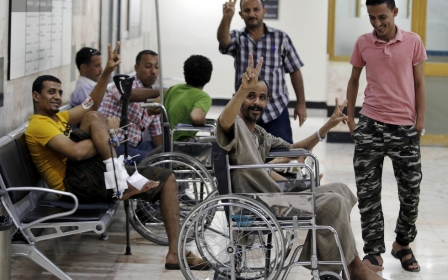 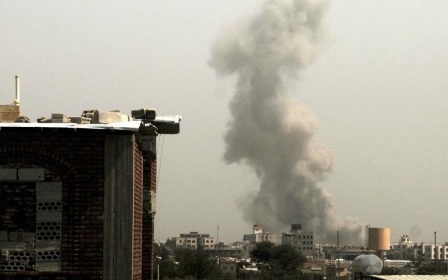