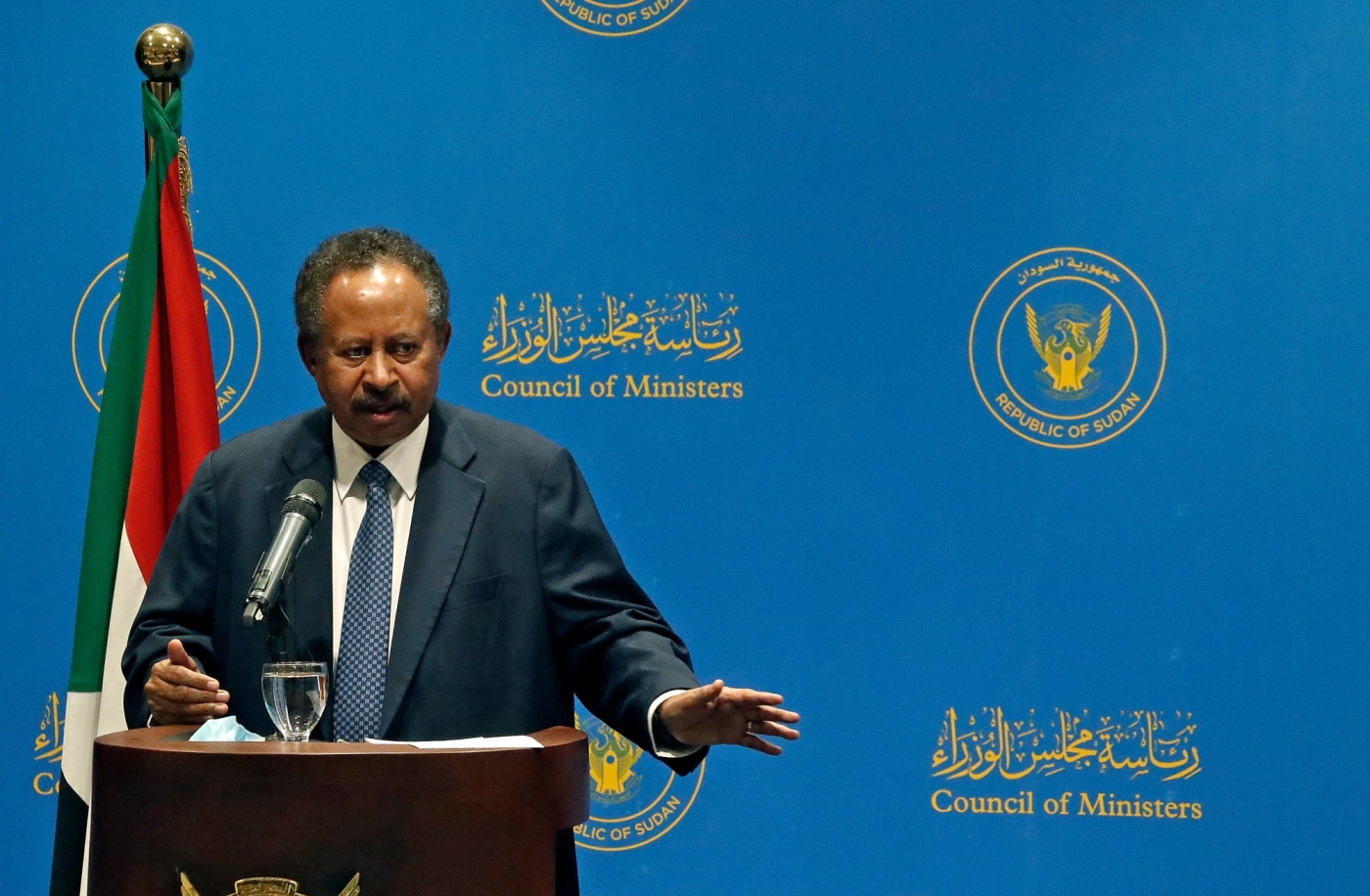 When Abdalla Hamdok became prime minister in August 2019, many in Sudan were hopeful for this new stage in the country’s history, after Omar Bashir was ousted from power in April that year following large-scale protests.

A former deputy executive secretary of the United Nations Economic Commission for Africa, Hamdok was seen as a solid choice to lead the civilian wing of the transitional sovereign council, a joint military-civilian body meant to lead Sudan into a new era of governance following Bashir’s after 30 years of rule.

'If he continues with the current policies, the revolutionaries will have no choice but to bring him down along with the army'

Millions of his supporters had adopted the slogan “Thank you Hamdok”, to show their backing of civilian rule and rejection of the political role played by the army and militias, which are accused of attacking pro-democracy protesters and conspiring with remnants of Bashir’s old regime.

But Hamdok’s unprecedented popularity has taken a hit in recent months, activists, political figures and analysts told Middle East Eye, as they worried that this development could negatively affect the country’s fragile democratic transition.

Since his appointment as premier, Hamdok has insisted on sticking with the “Sudanese model of transition” based on the power-sharing agreement signed in August 2019 between the pro-uprising political coalition of the Forces for Freedom and Change (FFC) and the army, which is due to last until late 2022.

But Hamdok’s decline in the eyes of the public has been in part attributed to his inability to stand up to the army’s takeover of major political and diplomatic files, hindering breakthroughs in many issues and demands of pro-democracy protesters.

Abdul Salam Kisha, the father of one of the 100 protesters killed in a brutal crackdown on 3 June 2019, told MEE that relatives of those killed had little hope of achieving justice.

A year and a half after the massacre, an investigation has yet to shed full light and bring accountability for the deadly events in Khartoum that day. 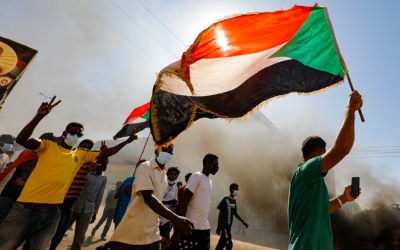 Families of those killed marched to the office of the general prosecutor in the Sudanese capital on Sunday, calling on him to end impunity and bring the perpetrators of the 3 June massacre to justice.

“We all know that the bringing of the killers of the protesters in the 3 June massacre to justice has become the cornerstone of protesters’ demands,” Rashid Ali, a member of a resistance committee in Khartoum, told MEE.

Other recent developments have also affected the popularity of the prime minister, Ali added.

“The killing of a citizen held in illegal custody inside a facility belonging to the Rapid Support Forces (RSF) militia has caused wide anger among pro-democracy protesters,” the 30-year-old said.

Ali was referring to 45-year-old Bahaa Aldin Nouri, who was abducted by the notorious RSF paramilitary group in December, only to be found dead several days later, his body bearing marks of torture.

Another failure imputed to Hamdok was his decision to freeze planned changes to the primary school curriculum, which was drafted under Bashir’s Islamist government, following pressure from religious groups on some of the content. Hamdok’s move led the head of the National Centre for Curricula and Educational Research, Omar El Garai, to resign in protest, while civil society organisations and pro-uprising activists also condemned the decision.

A Sudanese political analyst, who spoke on condition of anonymity, said he believed that Nouri’s death and the school curriculum controversy had particularly hurt Hamdok’s popular standing.

“There is no doubt that his popularity is going down because of the complications of the transition in Sudan and the rooted influence of the army generals who are out of the civilian (government’s) control,” he said.

“We can see that the army and the security sector haven’t been restructured and all these things reflect negatively on the PM.”

Meanwhile. a source from the Sudanese foreign ministry said that the army had “hijacked” foreign policy since Bashir’s overthrow - including the decision in October to normalise relations with Israel.

“The head of the Sovereign Council, Abdel Fattah al-Burhan, met the Israeli Prime Minister Benjamin Netanyahu and received delegations from Israel without consulting with the Council of Ministers led by Hamdok,” the source, who requested anonymity because he was not authorised to speak to the media, told MEE.

“The army leaders engaged in a secret deal to establish a Russian navy base in the Red Sea without even notifying the foreign ministry.”

Leading resistance committee member Mohamed al-Sharif also told MEE that he had no doubt the army was sidelining the civilian half of the government on most of the important issues.

“They allied with the Emirati and Saudi camp, as well as Egypt, in order to strengthen themselves and stage a coup against the civilian-led government,” he alleged.

Meanwhile, some fear that Islamists and affiliates of the Bashir regime have played a role in undermining Hamdok - who survived an assassination attempt last March - and his civilian cabinet. 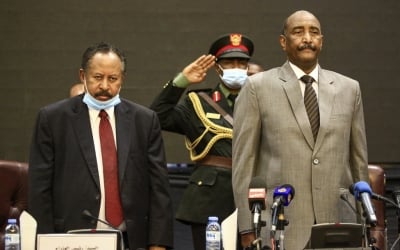 Sudanese political analyst Salah al-Doma also said he believed that Bashir supporters were behind economic and tribal troubles in the country. He noted that the sabotage of political transitions in Sudan was nothing new.

“Now history is repeating itself as Islamists stand behind the obstacles to the transition,” he argued.

“They are using their influence in the deep state to cause tribal clashes, obstruct the restructuring of the army to keep their agents in positions of influence, protect their economic interests and many other tactics to implode the transitional period in order to stage a coup against the civilians or to create general chaos like in many countries in the region.”

The Sudanese Professional Association (SPA), which led the protests against Bashir, has since on numerous occasions opposed the transitional government that it helped bring to power after long negotiations with the army.

Leading SPA member Mohamed Alfatih Youssef told MEE that, nearly two years since Bashir’s removal, the association believes that the government has failed to achieve the goals of the uprising encapsulated in the rallying cry of “freedom, peace and justice”.

The economy has continued to deteriorate, the army and militias continue to dominate the political landscape, conflicts continue across the country, and many of the laws inherited from the old government have yet to be changed, he said.

“The weakness of the prime minister is one of the main reasons behind the decrease of his popularity,” Youssef told MEE.

“The army is controlling the economy, peace talks with rebels, foreign policy, and leading the state in a direction opposite to the demands of the pro-democracy protesters.”

A leading member of the Sudanese communist party, Kamal Karar, blamed Hamdok himself for the failure of leading the transitional period, accusing the premier of surrendering to the domination of the army.

“Hamdok is steering far from the main demands of the revolution, especially the call for justice and accountability for those who killed protesters and gained impunity thanks to the partnership between the army and the FFC,” he told MEE.

Youssef said there was real frustration over Hamdok’s perceived inability to push back against the military, including General Burhan, the chairman of the transitional council, and notorious paramilitary leader Mohamed Hamdan Dagalo, the deputy chairman, whose RSF militia is accused of being behind the 3 June massacre.

“Dozens of million-man demonstrations marched to [Hamdok’s] office in order to support him in confronting the army and imposing the demands of the revolution, but he missed all the opportunities,” Youssef said.

“If he continues with the current policies, the revolutionaries will have no choice but to bring him down along with the army.” 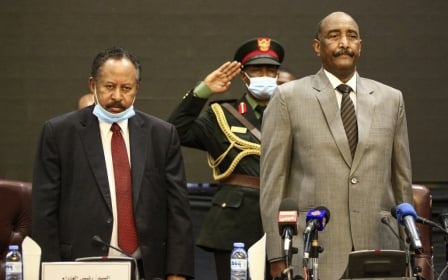