At Sudan's sit-in the revolution continues and art flourishes 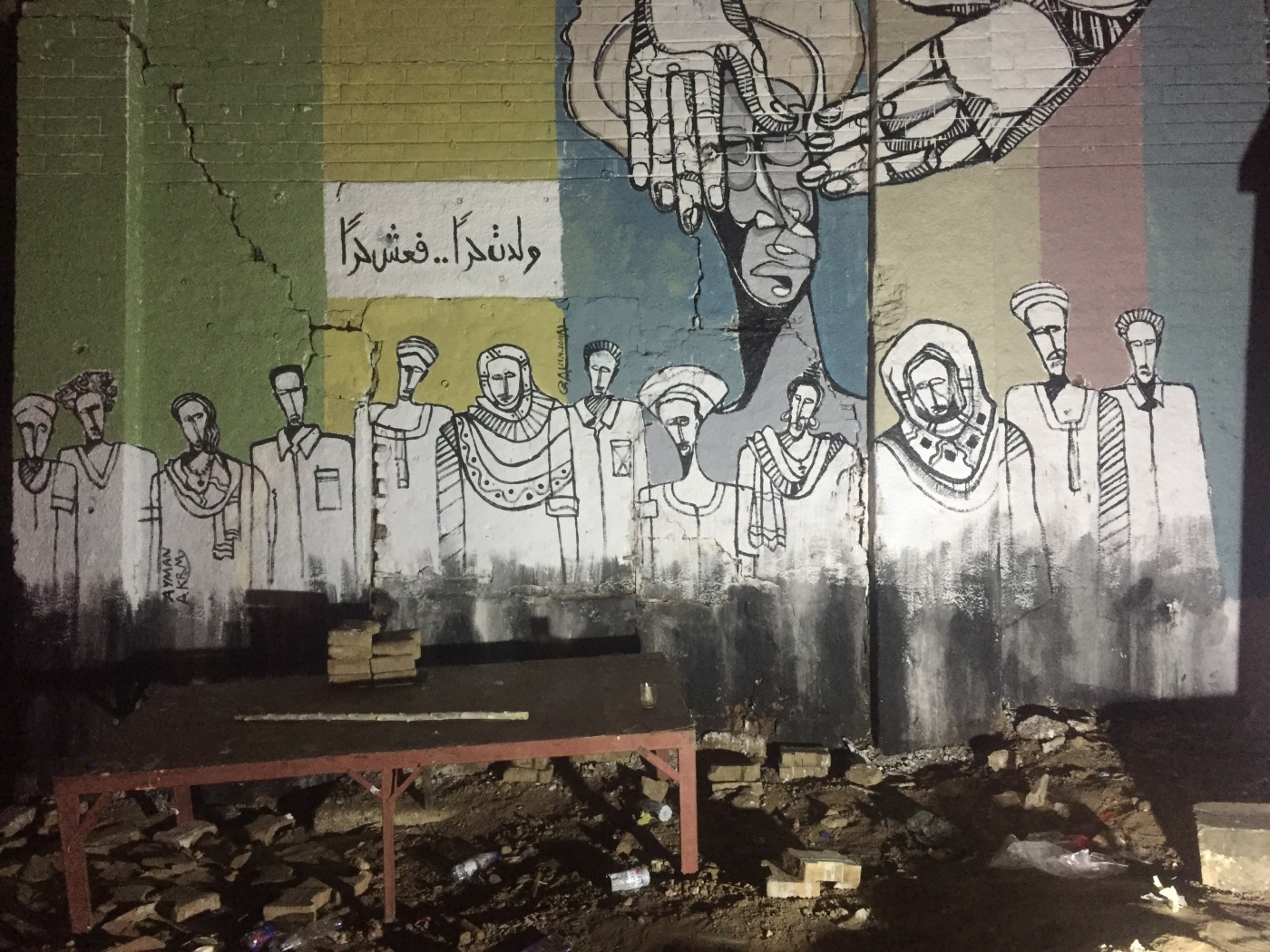 "I was born free, so I live free": freedom and justice have been the theme of Sudan's protest art (MEE/Taharqa Elnour)
By
Mohammed Amin
in
Khartoum

Sudan’s military headquarters used to be an unwelcoming place for the country’s citizens. Passersby were ushered along. Photos were banned.

But over the past two weeks it has become the centre of life in the capital Khartoum, where a popular sit-in has helped force two leaders from power and is seeking to overturn the whole ruling system.

It has also become an unlikely platform for the arts.

The walls of the sterile, highly secured compound, which also hosts the feared intelligence agencies, have been transformed by the revolutionary graffiti that now covers them.

Impromptu nightly theatre and music shows are held in the space outside, in the midst of protesters who have seen Omar al-Bashir ousted after 30 years of rule and are now calling for the military leadership to leave with him.

“We have painted on streets, walls and everywhere in the square and outside it, to let the people know the importance of arts and to deliver the ideas in a simple way to the people,” artist Muhanad Fadl Amlmual told Middle East Eye.

The next step, he said, is to take that art to the whole of the capital, spreading the message and goals of the protest movement.

Protests against Bashir and his regime began in December, but gathered pace after 6 April when demonstrators marked the anniversary of the last successful uprising in 1985 and decided to begin a sit-in outside the military headquarters.

While previous marches had been scattered with tear gas, rubber-coated bullets and often live fire, the demonstrators managed to turn the site of the sit-in into a permanent protest site that cranked up the pressure on Bashir. When security forces occasionally tried to clear the crowd, soldiers stationed around intervened.

The relatively safer space for protest that the sit-in afforded allowed art to flourish and gain prominence in a way that had been difficult before.

"We are tired, my friend, but we cannot lie down in the middle of the battle" https://t.co/SgNIauNVUy

The presence of the arts, which has also included dramatists and mime shows, has not been an accident.

The Sudanese Professionals Association (SPA), an oppositional group that has organised an almost daily programme of protests since December, said it has made sure there is a daily schedule of arts alongside political speeches to help unify the protesters and boost their spirit.

A layer of graffiti and other forms of painting now cover almost every surface around the sit-in, voicing the protesters' demand for “justice” and vowing “the revolution will continue”.

Protesters attend the sit-in in shifts to ensure a constant presence outside the military compound, and it often comes to life at night when thousands regularly gather.

Live concerts have been held, blaring the revolution-themed songs that have proliferated in the recent months and now dominate the broadcasts of many Sudanese radio stations.

But much of the entertainment has been more intimate, consisting of a single musician performing for the crowd immediately around them, like violinist Husam Abl-Alsalam who has made regular appearances, or a Sudanese soldier who has shown his solidarity with the protesters by playing a trumpet to the crowds.

'Singing is inspiring the people towards seeking more radical social change in the country, more than political speech'

Famous Sudanese singer Shamat Mohamed Nour has also regularly joined the protests, singing to the crowds and chanting against the military leadership that has taken power.

“Singing is inspiring the people towards seeking more radical social change in the country, more than political speech, and we believe that it has a lot to do with the increased momentum of this revolution,” he told MEE.

For months, the Sudanese protests passed almost daily with only limited international media attention, while they were ignored or censored in the local media.

But the images of creativity and leadership that have come from the site of the sit-in have helped to boost the visibility of the movement.

Online cartoonists, including from the Sudanese diaspora, have mocked Sudan’s military men and glorified the efforts of the protesters, adding to the ecosystem of art that the protests have created.

According to artist Saddam Ahmed, the role they have been playing should be recognised as crucial to the movement.

“Artists have had an important and leading role in these protests, as we began painting on walls before the old regime was ousted and that was serious. Many of us were arrested and even tortured because of this work,” Ahmed told MEE.

“The painters and artists should have a bigger role in the future of Sudan. They have played a major role in the revolution.”