Syria army announces halt in fighting in parts of Ghouta 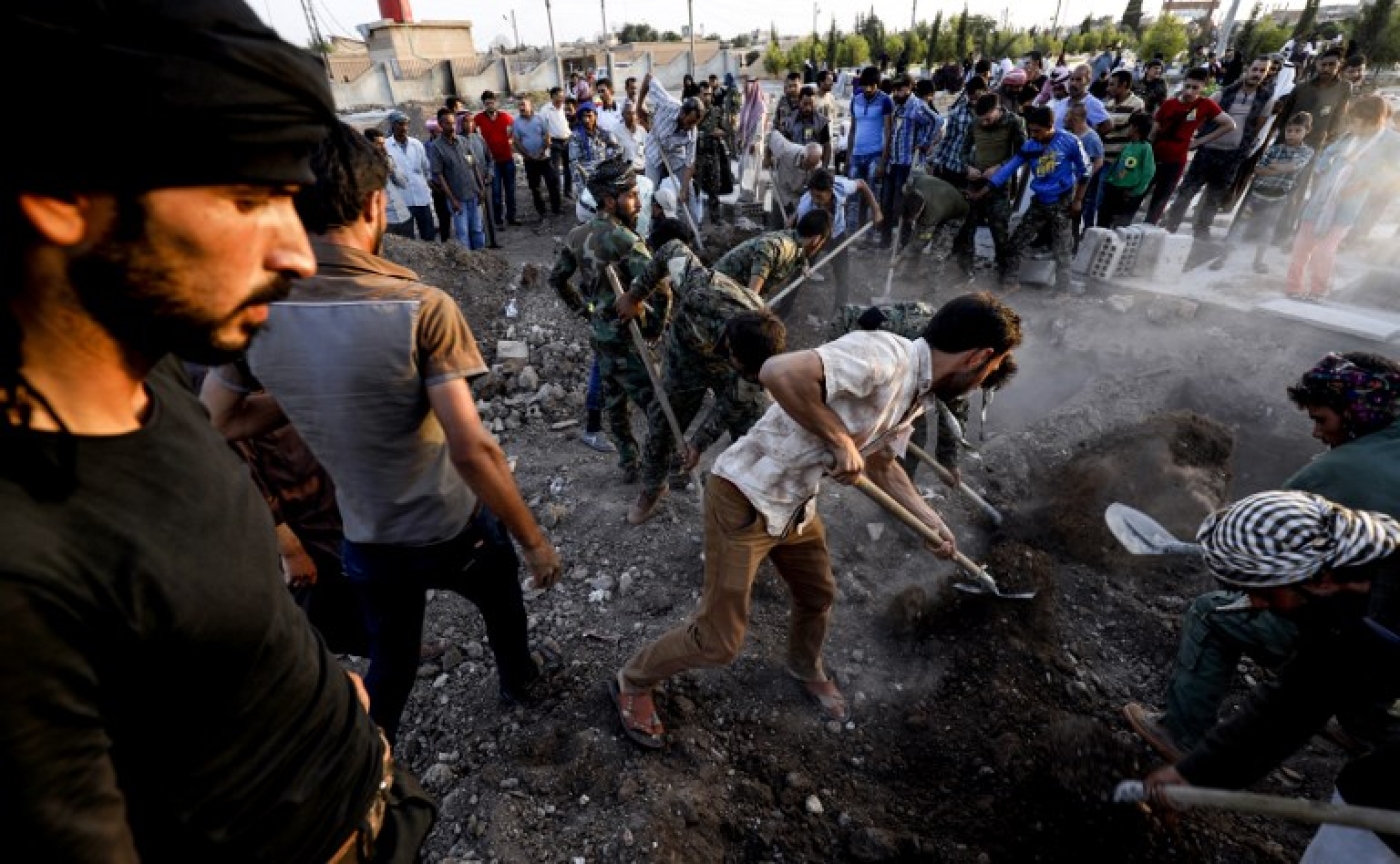 Syrians dig graves and mourn at a funeral for Arab fighters from the Kurdish People's Protection Units (YPG), killed in Qamishli city, near Raqqa, on 21 July (AFP)
By
MEE and agencies

Syria's army announced on Saturday a halt in fighting in parts of Eastern Ghouta after rebels and government ally Russia agreed on how a safe zone will function for the besieged opposition enclave.

The army "announces a halt in fighting in some areas of Eastern Ghouta in Damascus province from midday on Saturday (0900 GMT)," it said in a statement carried by state news agency SANA.

"The army will retaliate in a suitable manner to any violation" of the ceasefire, the statement said, without specifying what areas were included.

Russia said earlier Saturday it had signed a deal with "moderate" Syrian rebels at peace talks in Cairo on how a safe zone would function in Eastern Ghouta.

Eastern Ghouta is in one of four proposed "de-escalation zones" designated in an agreement reached by government allies Iran and Russia and rebel backer Turkey in May.

But the deal has yet to be fully implemented over disagreements on the monitoring mechanism for the safe zones.

The most recent talks in Kazakhstan this month between Russia, Turkey and Iran failed to iron out the details of the four safe zones.

It said the sides had also agreed "routes to supply humanitarian aid to the population and for free movement of residents".

Russia said it plans to send in the first humanitarian convoy and evacuate the wounded "in the next few days".

The Eastern Ghouta region, a major rebel stronghold near the capital, has been the frequent target of government military operations.

Meanwhile, Syrian warplanes carried out air strikes on Saturday against the Islamic State group in an area of countryside east of Raqqa and close to where US-backed forces operate, Syrian state TV reported, citing a military source.

The attacks in the town of Maadan and village of Bir al-Sabkhawi, near the provincial boundary with Deir al-Zor governorate, "destroyed several bases and vehicles" belonging to IS, the source said.

The UK-based Syrian Observatory for Human Rights monitoring group said it was the first time in several weeks that the Syrian military had launched an attack in that area.

The Syrian army has active front lines with IS militants in Raqqa's western countryside, where it has recaptured territory from IS militants. But air strikes in the east take the fight closer to where the US-backed Syrian Democratic Forces (SDF), an alliance dominated by Kurdish fighters, are operating.

The SDF launched a final assault to drive IS out of its stronghold of Raqqa city last month, and have spearheaded efforts against the group in Syria's northeast.

The Syrian army backed by Russian warplanes is separately fighting the militants further west, but has also carried out air raids in Raqqa and Deir al-Zor provinces.

The SDF accused Syrian government forces of bombing their positions in June, one of several incidents that raised tension between the United States on one side and Syria and Russia on the other.

It was not immediately clear how close Saturday's air strikes came to SDF positions, but they were within kilometres of SDF-controlled territory.