'Our cause is the same': Teachers unite in demand for respect and a living wage 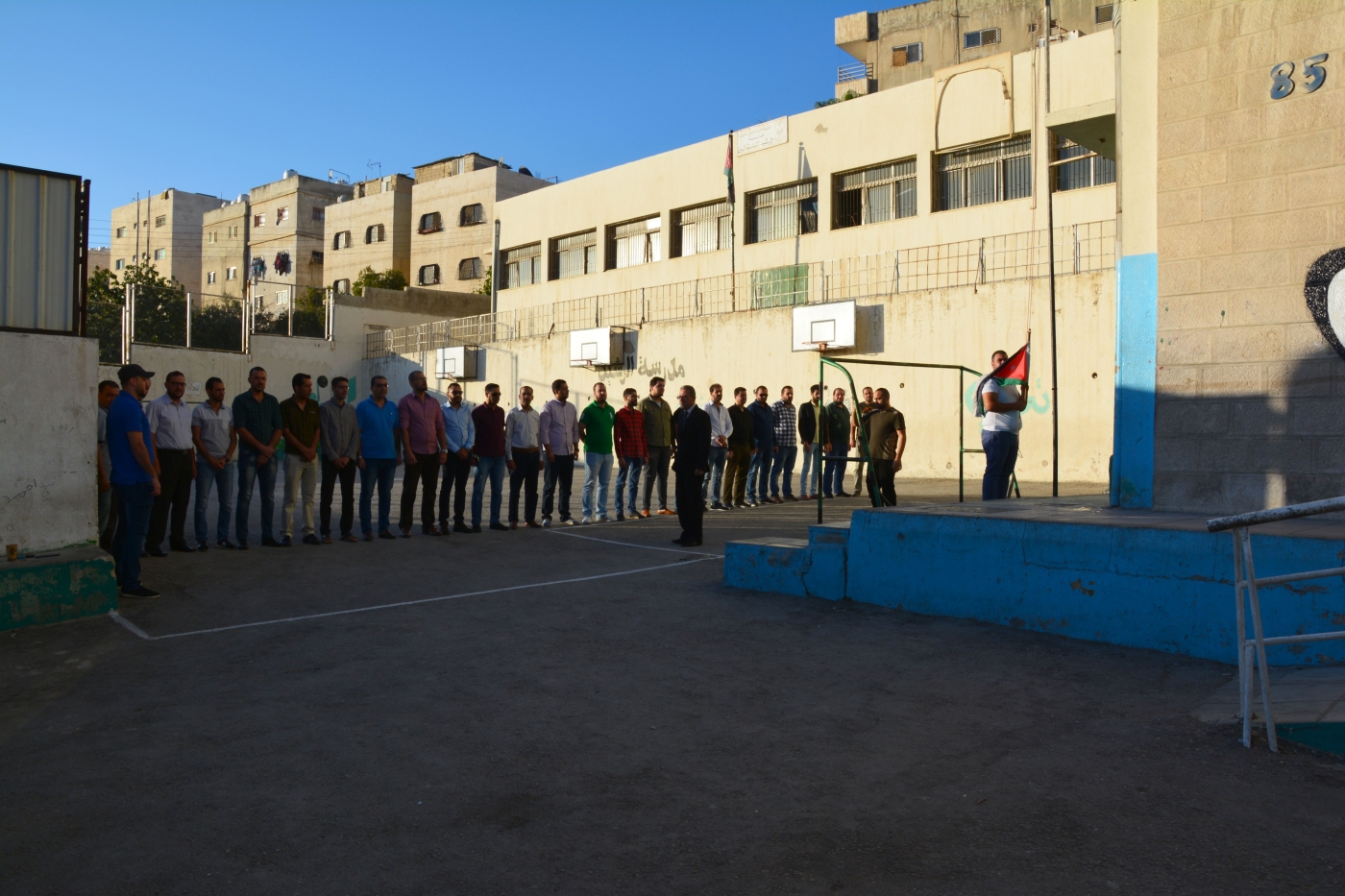 Al-Rashid school teachers stand while the national anthem is played on a loudspeaker, resonating across the deserted schoolyard (MEE/Marta Vidal)
By
Marta Vidal
in
Amman

The school bell rings at a quarter past seven in the morning at the al-Rashid primary school in Amman.

The day starts as usual with the national anthem and the raising of the Jordanian flag, but things have been a bit different lately. Teachers line up in the schoolyard, but there are no students around to sing the anthem while the flag is being hoisted.

Public school teachers in Jordan have been on strike since 8 September, but many are still going to school every working day. The vast majority of Jordan’s 86,000 public school teachers are refusing to teach until the government gives them a 50 percent salary increase that was promised to them in 2014.

“Some people have accused us of not going to school and not doing our job, but we are coming to work every day,” Laith al-Jammal, the al-Rashid school principal, told Middle East Eye.

The teachers stand upright while the national anthem is being played on a loudspeaker that resonates across the deserted schoolyard.

More than a million students in public schools have been out of school for the past three weeks. Parents are anxiously waiting for the government to reach an agreement with the teachers’ union so the new school year can finally start.

After the morning ritual is over, the school principal takes his phone and starts showing photos of how teachers have been spending their time since the beginning of the strike.

“This is the physical education teacher,” he says, while pointing to a photo of a man fixing the school gate.

“We are not wasting our time,” he adds, as he scrolls through photos and videos of men fixing and cleaning the school’s classrooms and halls.

Government officials estimate that the 50 percent salary increase would cost $158 million, which they say the treasury cannot afford. Jordan has been facing a dire economic situation and high inflation for years.

Negotiations between the teachers’ union and the government have failed to reach a resolution, as teachers have vowed to continue the strike until they are granted what they say is a long-overdue salary increase.

The union’s deputy head Nasser al-Nawasrah described the raises, between $34 and $44 a month, as “bread crumbs” and announced the strike would continue for the fourth week.

“I have been teaching Arabic for seven years and I earn 385 dinar ($543),” says one teacher at al-Rashid who requested anonymity.

He says his salary is not enough to cover basic expenses in Amman, where the cost of living is very high.

To earn some extra money, he teaches refugee children in the afternoon. He leaves home at 6am and comes back after 5pm. But the long working hours are not what bothers him the most.

“Teachers are the foundation of our society, but they receive very low salaries and no appreciation,” he tells MEE.

On 5 September, thousands of teachers joined a protest in Amman to demand higher salaries, but protesters were prevented from marching towards government headquarters by security forces.

'We were treated like criminals'
- Public school Arabic teacher

“I was one of the first to join the demonstration,” says the Arabic teacher. “All the roads were blocked. The police started pushing us. We shouted: 'peaceful, peaceful'. But they continued to push us.”

There were reports that tear gas was used to disperse the crowd and that 57 teachers were arrested and later released.

“We were treated like criminals,” says the Arabic teacher.

The announcement of the strike came after the demonstration. In addition to the 50 percent salary increase, the teachers’ union is demanding an apology from the government for the way the teachers were treated and has asked for those responsible for the alleged abuses to be held accountable.

“The people in the government look down on teachers. They have no respect for us,” says the Arabic teacher. For him and many others, the strike is about more than a salary increase. It is a demand for respect for teachers’ dignity.

Even though the strike is only taking place in public schools, many private school teachers are supporting it and joining demonstrations in solidarity with their colleagues in the public sector.

“We have been supporting the strike since the beginning,” says Nareeman Shawaheen, a teacher with 18 years of experience in the private sector in Irbid, northern Jordan. “Our cause is the same. We took to the streets with the public school teachers. We participated in the protests with them.” “Public school teachers have full rights to demonstrate,” says Shawaheen. “But private school teachers would be immediately fired and replaced if they started a strike.”

According to Ahmad Awad, director of Jordan Labor Watch, the Union of Private School Workers has limited bargaining powers. “It is controlled by the government and doesn’t work to improve the workers’ conditions,” he says.

With the exception of internationally accredited private schools, working conditions are significantly worse in the private education sector, where teachers are more vulnerable to abuses and unfair dismissals compared to their colleagues in the public sector.

A study published by the International Labour Organisation (ILO) in 2014 found that female teachers working in private schools were sometimes paid less than the minimum wage, which is set at 220 JOD ($310) per month.

The ILO’s investigation also noted that teachers were often not compensated for overtime and were often forced to resign during the month of May so that employers would not have to pay them over the summer holiday period.

“Our working hours are longer and our salaries are lower,” says Hadeel Kiswani, a biology teacher working in the private education sector in Amman. “We can easily be hired and fired.”

Given that any university graduate can become a teacher in Jordan, the supply of teachers always exceeds the demand in the education job market. The free market is stronger than the calls for respect for labour rights.

No place for activists

To tackle abuses in private schools, in 2015 the ILO launched the campaign “Stand up with the teacher” in cooperation with the National Committee for Pay Equity and with the support of the Jordanian organisation Ahel. Run by teachers who have faced violations, the campaign aimed to empower female teachers and demand better working conditions.

Shawaheen was one of the teachers who decided to act against abuses in private schools. She joined the campaign’s efforts to raise awareness about labour rights violations and helped organise the participation of other female teachers so that they could collectively fight for their rights.

With other members of the campaign who were trained by human rights experts and lawyers, she reached out to other female teachers to inform them about their rights and campaigned for the establishment of a unified contract to ensure that private school teachers are paid the minimum wage and are covered by social security benefits.

'Every time I apply for jobs in Irbid I get told I am a troublemaker because I am an activist'
- Nareeman Shawaheen, private school teacher

In 2017, the unified contract became mandatory in the private education sector. The Jordanian government announced that all private schools had to transfer their teachers’ salaries to bank accounts to ensure that labour regulations were followed. But the campaign is not over, according to Shawaheen.

“We created a database of 220 schools that are breaking labour laws,” she says. “We want to make the names of these schools are public and we are trying to pressure the government not to renew their licences.”

The strike has put public school teachers under the spotlight, but Shawaheen says teachers in the private sector continue to be neglected. Female teachers, in particular, remain under-represented in unions even though women comprise a large proportion of teachers in Jordan.

Shawaheen knew that joining the “Stand up with the teacher” campaign involved risks. Speaking out for fair remuneration and better working conditions put the campaign’s members at risk of losing their jobs teaching in private schools.

“After 13 years of working in the same school, I was dismissed,” she says. “Every time I apply for jobs in Irbid, I get told I am a troublemaker because I am an activist. Since I’ve been dismissed, I haven’t been able to find a new job.”

The loss of her source of income has put Shawaheen under financial stress, but she doesn’t regret joining the campaign and says she will continue with her activism.

“Every cause needs sacrifices,” she says. “I am no longer able to teach, but I am now stronger and more committed to the cause.”