Tear gas and terror: A Palestinian education under occupation 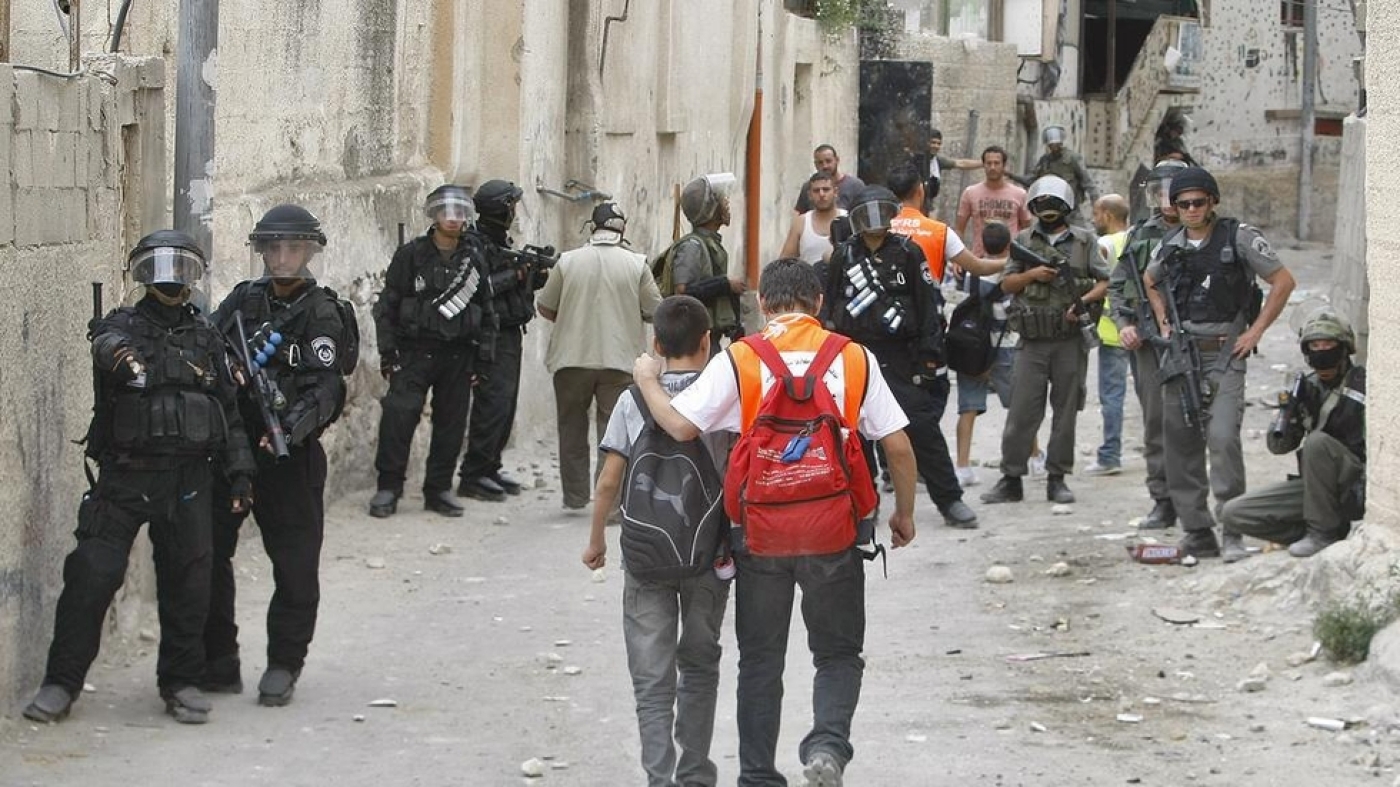 NABLUS, Occupied West Bank - The Israeli soldiers came as children were playing outside their village school south of Nablus. Within minutes tear gas had engulfed the playground, stones were thrown, and a 10-year-old boy was shot in the head with a rubber-coated steel bullet.

The violence on that morning of Sunday, 25 March was but the latest in a series of confrontations outside Burin village's high school and Ahmad Faris, the 10-year-old taken to hospital for stitches, was the latest casualty.

The settlers try to break the school windows and attack teachers and students with rocks. Sometimes they shoot live bullets

According to locals, the school is attacked up to three times a week by residents of the nearby illegal Yitzhar settlement, and Israeli soldiers from the nearby watchtower.

"More than 10 students refused to go to school after Ahmad's injury, and another one wet himself at school," Ghassan Najjar, a local activist told Middle East Eye.

"When you are studying and your school is surrounded by Israeli soldiers, how can you possibly focus in class?"

And the attacks fit a national pattern of increasing intimidation and violence against schools, children and teachers.

The Palestinian education ministry's annual report found 80,279 Palestinian children and 4,929 teachers and staff were "attacked" by Israeli settlers or soldiers.

Over the course of the year, nine students were killed under various circumstances, 600 were injured, and more than 300 were arrested, in 352 attacks by Israelis on 95 schools.

Schools on the frontline

Nestled in the rolling hills of the northern West Bank, Burin is home to about 3,000 Palestinians, and is surrounded on all sides by two illegal settlements, an illegal outpost, and a military base.

The school sits at the entrance of the village, and is attended by about 300 local boys and girls.

Perched on the mountaintop overhead is Yitzhar, the source of multiple settler attacks. About 50 metres behind the school is an Israeli watchtower.

With its close proximity to both, the school is often on the frontline of settler and soldier raids on the village, according to Najjar.

"Every week there are at least two or three attacks, from both settlers and soldiers," he told Middle East Eye.

"The settlers will come down from the mountain and try to break the school windows and attack teachers and students with rocks. Sometimes they even shoot live bullets."

He recounts how one day armed settlers managed to break into the school as children were taking exams.

Soldiers, he says, often leave the watchtower to shout insults at the children, and blast music from the vehicles to provoke them

Children often throw stones in retaliation. "Then the soldiers use this as an excuse to tear gas the school and shoot at the kids," Najjar said.

And 2018 is shaping up to be another dangerous year for children and teachers - Palestinian media has reported several attacks on schools since the beginning of the year.

On 21 March, days before Faris' injury, Israeli forces carried out a "show of force" in the Ramallah-area village of al-Mughayyir as children walked to school. Eight children were injured by rubber bullets in the ensuing clashes.

Two days before that, a school in the Bethlehem-area town of Tuqu was attacked by Israeli soldiers. Stones were thrown and tear gas was fired into the school grounds, and staff were forced to barricade the doors to prevent the soldiers getting inside.

While such attacks threaten the safety of children and teachers, Najjar told MEE that his biggest concern was Israel's ongoing confiscation of school land. In February, soldiers delivered a notice that Israel would be confiscating almost 15 acres of Burin school's land for the construction of a separation wall.

"This is the most dangerous threat facing the school now," Najjar said. "The planned construction of this wall will put more pressure on students, and make it impossible for them to get a proper education.

"They will be focused on protecting their land, and not on studying."

Confiscations are under way across the occupied territories. According to a February statement from the UN Office for the Coordination of Humanitarian Affairs (OCHA), 37 schools have pending demolition orders in Area C of the West Bank, which is under the full civilian and security control of Israeli authorities.

When an organisation comes to build new classrooms, the children know it is only a matter of time before the bulldozers come again

One of those schools, which was partially demolished in February for the sixth time since 2016, is located in the Bedouin village Abu Nuwar, where 670 Palestinians live in tents and sheet-metal shacks.

Under the pretext of being built without Israeli permits - which are nearly impossible for Palestinians to obtain in Area C - Israeli authorities demolished two EU-funded classrooms serving 26 Palestinian children in Abu Nuwar, sparking widespread criticism from Palestinian officials and the international community.

"These classrooms have been demolished so many times now," said Dawoud al-Jahalin, the head of Abu Nuwar's village council.

"When an organisation comes to build new classrooms, the children can't even be excited - they know it is only a matter of time before the Israeli bulldozers come again."

According to Jahalin, the 26 children now study in a local community centre and barbershop.

"Of course we hope to rebuild proper classrooms, but we need the help of the international community to put more pressure on the Israeli government to stop its demolitions," he said, adding that the confiscations went further than 'illegal' buildings - Israeli forces last summer confiscated solar panels that powered the classroom and a local guesthouse.

Located in the strategic so-called "E1 area" of the West Bank, Abu Nuwar is the largest of several local Bedouin communities threatened with demolition.

The E1 plan would see the construction of hundreds of settlement units linking Maale Adumim and Kfar Adumim with occupied East Jerusalem.

If implemented, it would create an urban settlement bloc in the middle of occupied Palestinian territory which would effectively cut the southern and northern parts of the West Bank in two, and further isolate occupied East Jerusalem from the West Bank.

The plan would spell the end for Khan al-Ahmar, whose entire community, including its school, is already threatened with demolition and forced displacement, and Jabal al-Baba - where the village's only kindergarten was destroyed in August 2017, one month before the start of the school year.

Rights groups have argued that Israel's policies in E1 amount to forcible transfer - strictly prohibited under international humanitarian law and a violation of the Fourth Geneva Convention.

"The Bedouin communities in the Jerusalem area have been here since the 1950s, after we were made refugees from our original lands in the Negev desert, and we are not even allowed electricity, water, or road networks," Jahalin told MEE.

"Meanwhile Maale Adumim, which was built illegally in the 1980s, has over 70 gardens and play areas, 12 schools, and buses to take their kids to and from school.

"We are living in the 21st century, and Palestinian children still do not have access to one of the most basic human rights: the right to education."

The education ministry also highlighted the effect Israel's extensive network of checkpoints and closed military zones on the right and safe access to education.

The ministry's 2017 report said Palestinian children and teachers at 51 schools were delayed at military checkpoints and gates while on their way to and from school.

26,808 students and 1,029 teachers were either prevented from getting to school or faced long delays at checkpoints, resulting in "35,895 classes wasted"

As a result, 26,808 students and 1,029 teachers were either prevented from getting to school or faced long delays, resulting in "35,895 classes wasted".

In the southern West Bank, in the Masafer Yatta area of the south Hebron hills, 210 Palestinian children living in a cluster of 12 small villages face the daily challenge getting to class in an active military training zone.

Learning in a firing zone

Declared by the Israeli government as Firing Zone 918 in the late 1970s, the Palestinians living in the area spanning 8,648 acres are subjected to the whims of the Israeli army, which routinely exercises with live ammunition.

Nidal Younis, the head of Masafer Yatta village council, told MEE that the children in the community were often the most exposed to the military exercises.

Can anyone else in the world imagine themselves as a child, or imagine their children, trying to get a proper education under these conditions?

"There are only three schools in the entire area, and most of the communities do not have access to school buses, forcing kids to walk several kilometres to and from school," Younis said.

He added that any buses secured for children were often stopped and turned around by Israeli forces on the way to school.

"As the kids walk to school, military helicopters fly overhead at low altitudes, whipping up clouds of dirt and sand around the children, hurting their eyes and delaying their journey to school," he said.

He added that during active training periods, soldiers will close certain areas leading to the schools for up to 10 days, leaving teachers and children sitting at home until the army reopens the area.

Younis said Israel has prevented locals from paving proper roads, or installing electricity or water infrastructure inside the zone.

"In the summer, kids walking on dirt paths have to fend off snakes and scorpions, and by the time they arrive to school they have overheated and are thirsty - and they don't even have access to running water.

"Can anyone else in the world imagine themselves as a child, or imagine their children, trying to get a proper education under these conditions?

"It is unbearable, almost impossible. But in Palestine, this is what our children must go through just to learn." 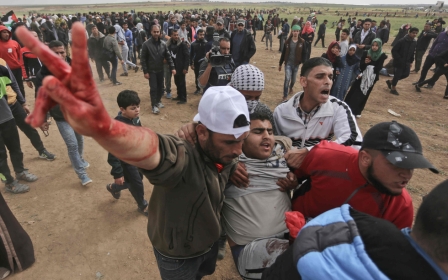 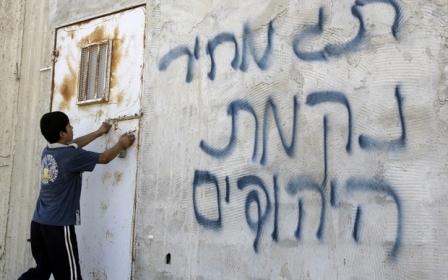