Since Algerian president Abdelaziz Bouteflika stepped down on 2 April following weeks of protests against his 20-year rule, comparisons have abounded with other North African countries which have gone through uprisings since 2011.

Overcoming a political crisis through elections seems to be the ultimate democratic approach. So, some ask, why can't Algeria simply implement the same roadmap as Tunisia? Why make things complicated when you can keep it simple?

Tunisia is widely perceived to be the Arab country to have most successfully navigated its democratic transition since 2011. Eight years after the protests that forced former president Zine el-Abidine Ben Ali into exile, the country has succeeded in maintaining stability and unity through two presidential and parliamentary elections.

However, the Tunisian template cannot be replicated in Algeria. Why? The transition succeeded in Tunisia not as a result of a clear political framework but for reasons unrelated to the model of transition.

In 2011, Tunisia's political and social context was totally different from the current one in Algeria.

Ten important points are worth highlighting:

Tunisia's transition had the unanimous support of the international community. France, the United States and also Algeria acted together to make the Tunisian experience a success - or, at least, to prevent Tunisia from turning into a violent state.

Each country had its own vision and goals, but all agreed on one point: Tunisia had to embrace the path of democratisation. The country's economy was too fragile to afford becoming a hub of instability on the southern shore of the Mediterranean, a few kilometres from Italy, Algeria and Libya.

In this sense, Tunisia became a counter-model to Syria or Libya - two countries who some critics have argued were punished for their decades-long anti-Western stance.

Because of its history of rather accommodating foreign policy toward Europe and other Western powers, Tunisia has been spared the kind of controversial military intervention experienced by the two other Arab countries.

Tunisians have a reputation for knowing the art of compromise and negotiation - or what some call "knowing how to play politics" - something that Algerians are said to perceive with contempt and disregard.

Tunisia secured its independence by resorting to the "take and ask for more" tactics of its first president, Habib Bourguiba. Tunisian society, one can argue, is willing to change gradually and evolve in stages.

Algeria follows the opposite pattern: radicality is the rule. This has led the country to pay a heavy price for sometimes important, but merely symbolic, achievements.

Tunisian society is relatively well-structured and homogeneous, unlike Algerian society, which has undergone dramatic upheavals in a very short period of time.

This makes the protests in both countries different in tone and nuance. Tunisians are moderate, balanced and even realistic. Algerians are radical, as evidenced by the “Yetnahaw Gaa” (“They should all be sacked”) slogan among protest hashtags.

Tunisia is not a militarised country. Its army does not have the same historical and symbolic heritage and influence as the People's National Army in Algeria. Its political class is dominated by urban-educated elites, while in Algeria, the political sphere is deeply shaped by war and violence, be it colonial trauma or the civil war of the 1990s. Tunisia experienced virtually no significant domestic violence during the 20th century, or even before, whereas Algeria experienced bloody conflicts between 1954 and 1962 and in the 1990s.

Algeria's history has enforced a belief that conflicts must be settled through force and violence. Negotiation is merely a formal conclusion intended to enshrine military victory.

6. Alternatives to 'the system'

In Tunisia, organised forces existed outside the dominant system even prior to the uprising. Bourguiba and Ben Ali's police regimes relied on middle classes that were well-represented in the system, to the disadvantage of the lower classes. However, under Ben Ali, the Tunisian system's inclusiveness weakened, driving some of the former elites to the sidelines.

With the collapse of Ben Ali's system, the Tunisian General Labour Union (UGTT) and Ennahda political party not only managed to contain the protests, but also offered an alternative to the declining regime. They have succeeded in shaping part of the population's political views on positive and constructive grounds, towards an objective beyond the simple elimination of the regime.

But Algeria has no equivalent to Ennahda or the UGTT, as the Bouteflika regime has quashed opposition or civil society movements. The Movement for the Society of Peace (MSP) and the UGTA - Algeria's equivalents to the Islamist party and unions in Tunisia that have paved the way after the revolution - have long been in cahoots with the government.

Tunisian Islamists have learned from the Algerian experience in the 1990s and circumvented the mistakes made by other religious movements in the region.

In a quest for absolute control in Algeria, the Islamic Salvation Front (FIS) was at the centre of a deadly civil war that lasted a decade.

While Algeria was torn apart by conflict, Ennahda leader Rached Ghannouchi was in exile in Europe - where he observed from afar the consequences of FIS’s intransigeance, which reinforced his beliefs in the importance of freedoms and dialogue.

Perhaps in part due to Algeria’s own recent history, Ennahda - which describes itself as a party for "Muslim democrats" - has refused to rule alone. The party chose to entrust the presidency to Moncef Marzouki, a human rights defender with a well-known track record. The purpose was to avoid generating unnecessary tensions during the transition.

It is interesting to note that successful transitions occurred in countries where there was already a structured, developed opposition in place.

Tunisia's transition has had the unanimous support of the international community

The UGTT and Ennahda in Tunisia, the ANC in South Africa, the Solidarity trade union in Poland - all contributed to dampening violence, unlike the Algerian FIS which aggravated the situation in the 1990s. In Russia, the lack of an organised alternative caused a collapse followed by the revival of an authoritarian system.

9. All or nothing approach

Another difference between Algeria and Tunisia is the scale of demands. In Tunisia, protesters were willing to accept a compromise to progressively move towards democratic objectives, provided that the Ben Ali system was brought to an end.

In Algeria, Bouteflika's name is crossed off the game sheet. The key individuals of his government have been cast aside or are on their way to being so, but the street has only raised its demands further. The protesters have set the bar high, so high that their demands cannot be met through negotiations as was the case in Tunisia.

Both Ben Ali and Bouteflika's overthrow were aided by the countries' respective army chiefs of staff. In Tunisia, however, General Rachid Ammar had no ambition. He acted as a facilitator before handing over the reins to civilians, as Tunisia does not have a history of military rule.

In Algeria, General Ahmed Gaid Salah too decided to support the people, ending a 15-year commitment to President Bouteflika.

But the similarity ends here. Gaid Salah embodies an authority that has always been in possession of real power in his country, while his Tunisian counterpart inherited political responsibility by accident, and quickly got rid of it.

As the situation unfolds in Algeria, comparisons to the state's eastern neighbour remain too simplistic and incomplete to adequately predict the future.

Analysis
Israeli security forces embarrassed at housekeeper who tried to spy for Iran
Analysis
Itamar Ben-Gvir: With rise of a Jewish supremacist, Israel's Likud is pulled far-right
Analysis
How Sudan's neighbouring powers have a stake in the coup's future 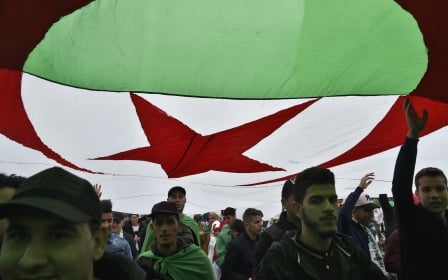