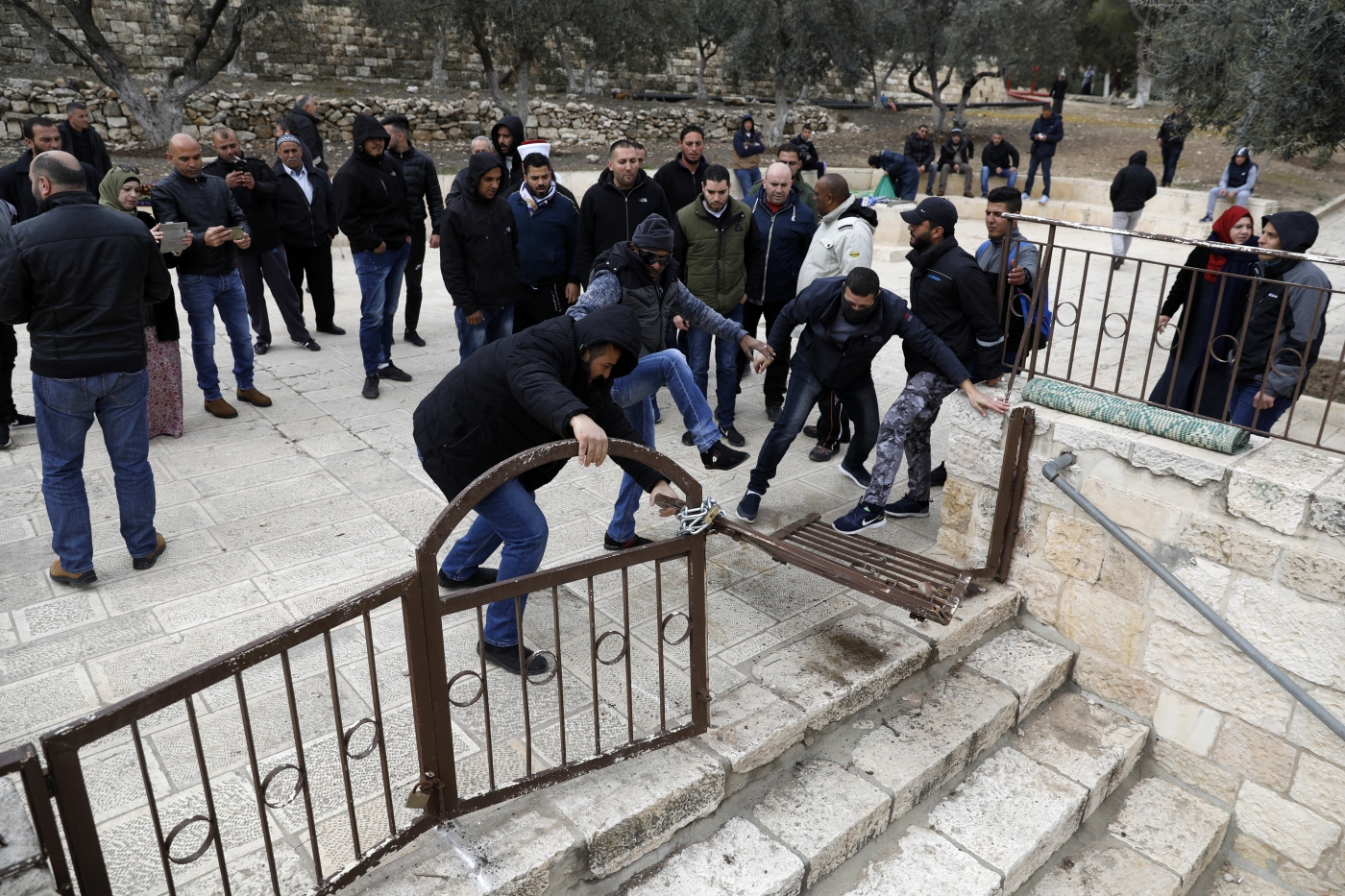 Israeli forces violently clashed with Palestinian worshippers on Monday at the Al-Aqsa mosque compound in the occupied East Jerusalem after perceived attempts to change the status quo in the tense Old City.

Israeli military police late on Sunday night put new locks on a metal gate that leads to the historical al-Rahmeh Gate on the eastern wall of the Old City of Jerusalem, the Islamic Religious Waqf said in a statement.

Altercations started after Palestinian Muslims performed the noon prayer in front of the closed gate in protest at new chains being placed by Israeli forces on the gate leading to al-Rahmeh.

Palestinians kicked the gate and attempted to open it before Israeli police attacked them and arrested five, temporarily shutting down all gates leading to Al-Aqsa compound.

Transaltion: Savage beating and arrests. The occupation attacks youth and arrests them after they attempted to open Al-Rahmeh gate in Al-Aqsa.

Hatem Abdel Qader, a member of the Islamic Religious Waqf, told Middle East Eye that Israel had closed the area of al-Rahmeh Gate since 2003 by a court order.

"This area is part of the 144 thousand square meters of the Al-Aqsa compound. All its gates, stairs, domes and yards are part of the mosque. If people did not protest today against this [Israeli] act, it would have consequences, such as cutting off this part from the Al-Aqsa mosque by seizing it," Abdel Qader said.

He added that despite al-Rahmeh Gate's substantial size, Israeli police forbids employees and workers of the Islamic Religious Waqf, which manages Al-Aqsa, to use it to enter the religious compound.

Although under Israeli occupation, the Al-Aqsa compound is still managed by an Islamic Waqf.

Israeli settlers regularly enter the Al-Aqsa compound accompanied by Israeli forces, often performing Jewish prayers on the site despite regulations against non-Muslim worship on the site.

Jewish Israelis believe that the Al-Aqsa Mosque compound stands atop where the millennium Second Temple once stood, and some far-right Israeli activists have advocated for the destruction of the Al-Aqsa compound to make way for a Third Temple.

Israeli settlers are attempting to cultivate support for an increased Jewish presence on the site through daily visits in order to change the religious status quo of the Al-Aqsa compound as agreed between Israel and Jordan, the custodian of Islamic and Christian holy sites in Jerusalem.

The Waqf issued a statement demanding the immediate removal of the locks on the metal gate and the opening Al-Rahmeh Gate area to Palestinians for prayer.

Waqf members are meeting on Wednesday to discuss the issue, according to Abdel Qader.

"Jordan should move and stop this. If diplomatic efforts do not work out, people might find themselves opting to protest as they did when Israel installed metal gate detectors in summer 2017 in front of Al-Aqsa's gates," he said.

Palestinians fear that any changes to the status quo at Al-Aqsa, the third holiest site in Islam, aim to eradicate their claims to the area and further extinguish their aspirations for full rights and a state of their own with Jerusalem as its capital.

Last month, Israeli police forced shut the Dome of the Rock - located inside the Al-Aqsa compound - for almost five hours, preventing Muslims from praying inside it, after the Dome's guards prevented an Israeli policeman wearing a Jewish religious skullcap from entering the shrine.