Residents in the war-torn country despair as the air campaign destroys lives, families and homes 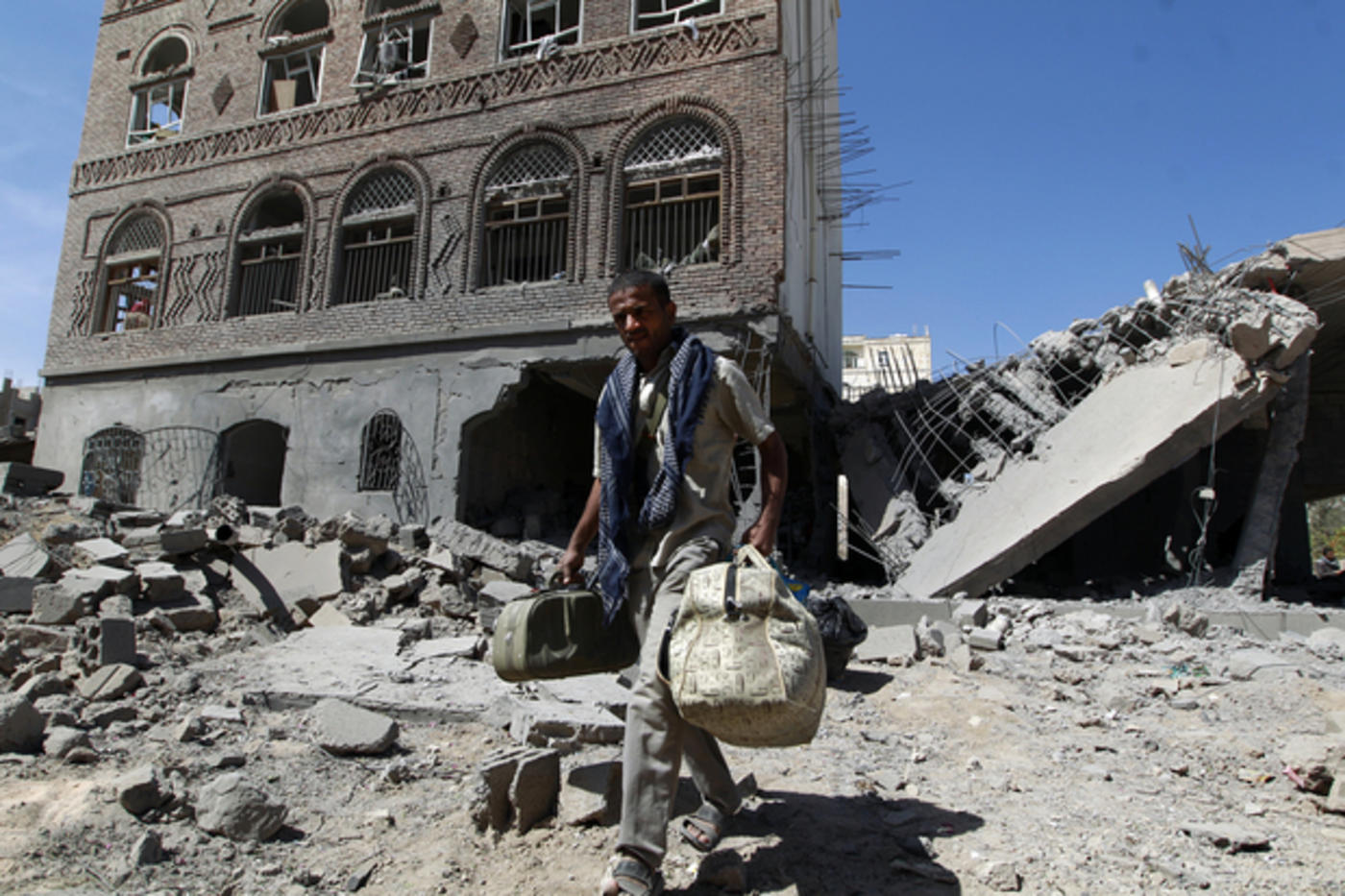 SANAA, Yemen - When Saudi-led warplanes fly over Sanaa, or any other area of Yemen, one can hear old men and women praying to God, asking to be spared by the incoming air strikes. Others simply curse Saudi Arabia.

While many of these civilians might not fully understand the political machinations behind the current war in their country, they understand only too well that the Saudi-led coalition’s air strikes continue to kill civilians in residential areas, markets, hospitals and even camps for refugees.

The coalition was formed in March 2015, ostensibly to repel rebel Houthi fighters and their allies in the army. While the UN has struggled to issue a reliable death toll in the conflict, in September it stated that over 60 percent of recorded civilian deaths were at the hands of coalition forces.

Human Rights Watch (HRW) accused the Saudi-led coalition in September of committing war crimes in Yemen, called on the United Nations Security Council to launch an international investigation into the coalition's "unlawful" air strikes affecting civilian adults and children. When a February Security Council resolution extended UN sanctions on Yemen by a year, it did not specifically call for an investigation into Saudi responsibility for civilian casualties.

In September, the UN said it had verified 5,144 civilian deaths during the war in Yemen, mainly from air strikes by the Saudi-led coalition.

UN High Commissioner for Human Rights Zeid Ra'ad Al Hussein called for an independent international investigation, saying such a move would "go a long way in putting on notice the parties to the conflict that the international community is watching and determined to hold to account perpetrators of violations and abuses."

Residents in Houthi-controlled areas are not necessarily supporters of the rebel group - but almost all of them are opponents of the Saudi-led air strikes, which they see as targeting civilians more than they do the opposition.

Farjia al-Dhafiri, who is in her 50s, lives in Sanaa, which fell under Houthi control during late 2014. She said she is strictly opposed to Saudi Arabia because of the daily attacks on the capital. She said she herself witnessed a massacre in a residential area in the Attan neighbourhood last year.

Dhafiri prays every day to God, asking for the war to end and for the deaths of civilians to be avenged - but her prayers increase when she hears the warplanes above.

"I am an old woman and I do not care about my life, but I care about my children and grandchildren as the warplanes may kill them at any moment,” she said.

“And even if the air strikes don’t kill them, it is still killing their future,” she added, while praying to God to help Yemen.

Dhafiri typifies many Sanaa residents, she says, in that she is illiterate and does not know much about politics. But she does know a lot about humanity.

Last August she was near the village of Attan when she witnessed an air strike on a residential area which left 14 people dead.

"While I was walking back to my home, I heard the buzz of the warplanes, and I prayed to God that they avoid civilians, but in minutes the buzz grew nearer to me," she recalled.

"Suddenly, the bombing happened near me, and I couldn't see anything because of the dust. I heard the sound of people crying, but I did not immediately understand what had happened."

Later, Dhafiri saw rescuers taking bodies out from under the ruins and putting them into cars. Houthi sources have said that there were no leaders in that residential area, where some of Dhafiri's relatives live, during the strike.

Since the start of the war, scores of coalition strikes have indiscriminately killed and wounded thousands of civilians, in violation of international laws regulating warfare, Human Rights Watch said last year, adding that the coalition has also used internationally banned cluster munitions.

The group has also documented 58 air strikes which it says were illegal since the start of the campaign, which have killed nearly 800 civilians and hit homes, markets, hospitals, schools, civilian businesses and mosques.

"Some attacks may amount to war crimes," HRW said. "These include air strikes on a crowded market in northern Yemen on March 15 that killed 97 civilians, including 25 children, and another on a crowded funeral in Sanaa on October that killed over 100 civilians and wounded hundreds more."

"Human Rights Watch investigated 18 apparently unlawful strikes, some of which used US or UK-supplied weapons, on 14 civilian economic sites. The strikes killed 130 civilians and wounded 173 more. Following the attacks, many of the factories ended production and hundreds of workers lost their livelihoods," HRW added.

The coalition has repeatedly denied allegations of war crimes, and says its attacks are directed against its foes in Yemen’s armed Houthi movement, not civilians.

While many Yemenis have adapted to life under the air strikes, they hope that war ends soon so they can live peacefully.

Hamadah Ayman, 31, a resident of Sanaa who lost his work at a factory after it was targeted by Saudi-led air strikes in 2016, said that three years were enough for the coalition to realise that it could not succeed in Yemen.

"After three years of targeting civilians, Yemenis have become more aware that Saudi Arabia does not work in the interest of Yemenis," he said. "Rather, Saudi Arabia works for its own interests, killing Yemenis everywhere."

Ayman said he hoped that the international community forces could stop Saudi Arabia's war in Yemen. "I am not a Houthi, I am a man who hopes to build his future in a safe country, but the daily air strikes threaten our lives and future. I hope that all Yemenis oppose the air strikes."

Many Yemenis have lost relatives in air strikes and have been demanding investigations into the incidents and punishment against the perpetrators. One Yemeni, who spoke to MEE on condition of anonymity, said his brother was killed alongside seven others during an air strike in Haddah.

"Saudi Arabia says it targets the Houthis, but in fact they target civilians. My brother was killed while he was inside his house in a residential area.

"The Houthis held several military parades in Sanaa and the air strikes did not target them. Moreover, the air strikes have not targeted the Houthis' headquarters in Sanaa, whose location is known by all, while at the same time they target civilians."

Ayman said that he wanted to send a message to Saudi Arabia that three years of torture was enough. "I hope to start building Yemen instead of destroying it."

Pro-Yemeni government military leaders believe that the air strikes help the forces on the ground to advance against the Houthis.

A source within the leadership of the army in Taiz told MEE on condition of anonymity that the Saudi-led air strikes helped forces loyal to exiled Yemeni President Abd Rabbuh Hadi to advance on the ground, while stopping any Houthi advances.

"The air strikes play a major role in the battle, and without them we cannot recapture any area," he said. "Mistakes happen everywhere, so it is normal that air strikes target civilians sometimes, but this does not mean that the air strikes do not help us in the battle."

However, some Yemenis have joined the Houthis after losing relatives in Saudi-led strikes. Ali Mohammed al-Raimi's family was killed in an air strike in Sanaa's Mahwa Aser neighbourhood on 25 December.

It was difficult for me to see my family under rubble, but I was brave enough to take them and bury them. Then I decided to join the battlefield with Ansar Allah against the killers of my family

The attack killed seven people, including Raimi's parents, three children and his brother-in-law. He only survived because he was not in the house at the time.

"When I heard the air strike fall in our neighbourhood, I ran back home. There, I found that my family was buried under rubble, while another air strike had targeted a car near our house.

"It was difficult for me to see my family under rubble, but I was brave enough to take them and bury them. Then I decided to join the battlefield with Ansar Allah [the Houthis] against the killers of my family."

Houthi political analyst Mohammed al-Dailami told MEE that the Saudi-led strikes had caused many civilians to take up arms against Saudi Arabia.

"Saudi Arabia is killing Yemenis everywhere around the country and they do not discriminate between civilians and military targets," he said. "So when people see this, they decide to join the battle against the killers of children and women."

Dailami said all Yemenis should oppose Saudi Arabia's role in Yemen in different ways, calling on people to protest on 26 March against Saudi "aggression" in Yemen.

Meanwhile Dhafiri, who also plans to protest, said: "I am an illiterate woman, but I want to ask the educated people, what are the advantages of the air strikes?

"For me, I believe there are no advantage, as they only kill Yemenis and their future."