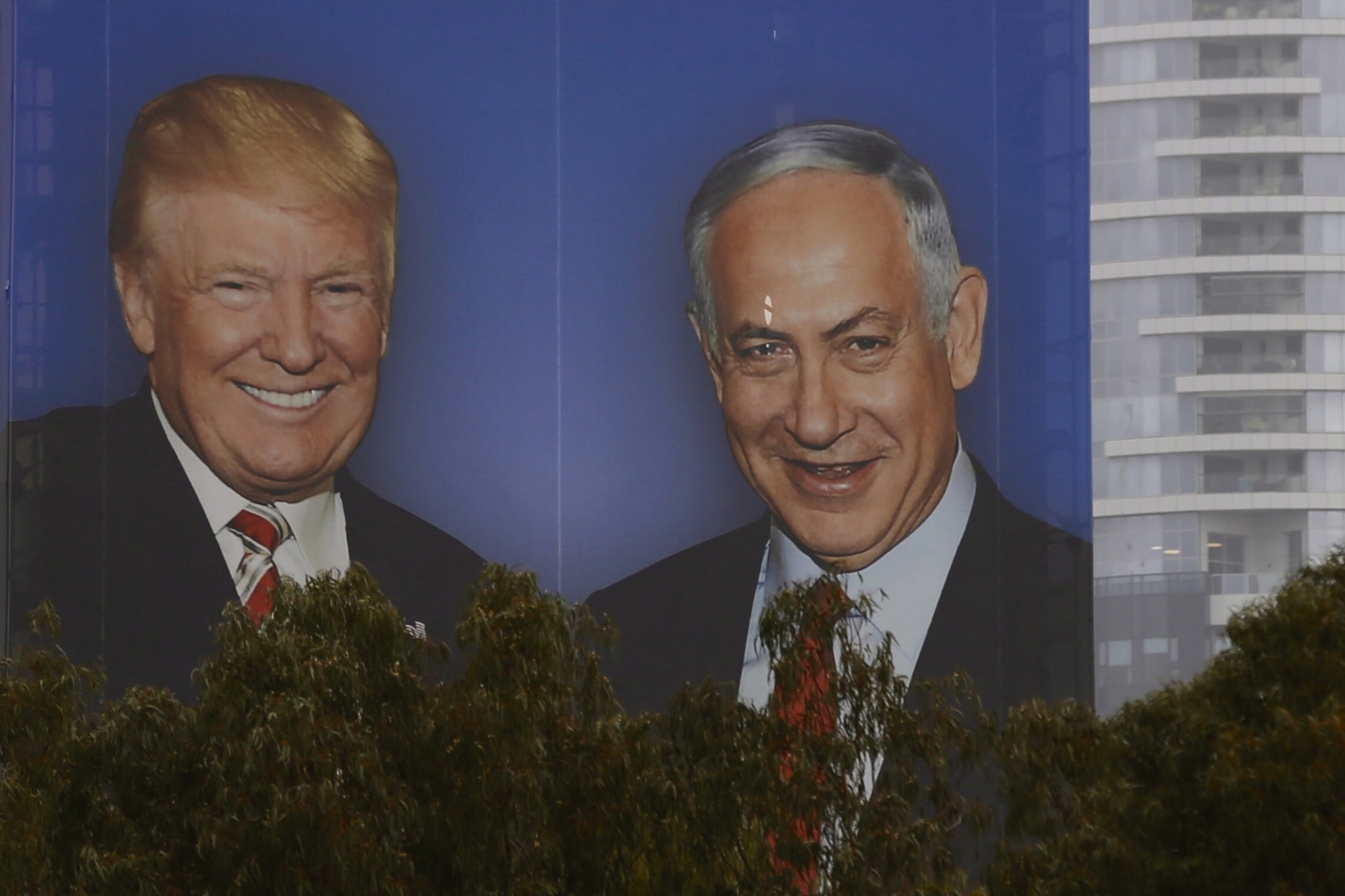 When the infamous "send her back" chants erupted at a North Carolina rally for Donald Trump last week, the president was lambasting Congresswoman Ilhan Omar for her criticism of Israel.

"Omar has a history of launching vicious, antisemitic screeds," Trump said, before standing in silence to allow the racist chants to intensify.

Thirteen seconds later, he continued: "And she talked about the 'evil Israel' and 'it's all about the Benjamins' - not a good thing to say."

Since making his racist remarks against Omar and three other congresswomen of colour earlier this month, Trump has mentioned Israel more than a dozen times on his Twitter feed - all in the context of the controversy.

And that's just in the virtual world.

Almost every time the US president addresses the outcry that ensued after he told the lawmakers to "go back" to their "crime infested countries" on 14 July, he has invoked Israel to fend off accusations of racism.

"I definitely think it's a strategy," said Rebecca Vilkomerson, director of Jewish Voice for Peace, a Jewish-American advocacy group for Palestinian rights, referring to Trump's incessant mentions of Israel.

But Vilkomerson said she doesn't believe the strategy will work.

"It's a really cynical - and to be honest, scary - attempt to use antisemitism and this form of support for Israel as a shield against accusations of racism against people of colour," she told MEE in an interview.

For nearly two weeks, Trump has repeatedly lambasted the four Democratic representatives, all of whom are serving their first terms in Congress.

Known as the Squad, the group includes Rashida Tlaib, who is of Palestinian descent, and Omar, who came to the United States as a refugee from Somalia. Tlaib and Omar are the first Muslim women ever elected to Congress.

Israel has been a focal point of his attacks; he has invoked the country repeatedly since his tweet in mid-July caused global outrage.

During a speech on Tuesday at Turning Point USA, an organisation for young conservatives, Trump mentioned Israel once again - this time fabricating antisemitic slurs that he attributed to the congresswomen.

"We don't like when they say 'evil Jews'," Trump told the crowd.

None of the four congresswomen has never uttered that phrase.

"We don't like when people say horrible things about Israel… And then you don't have the Democrats fighting for Israel," Trump continued. Vilkomerson said Trump is "overreaching" by trying to convince people that his administration is fighting antisemitism by supporting Israel, adding that the approach may backfire.

"I think it's helping people to understand actually that you can love Israel and hate Jews," Vilkomerson told Middle East Eye.

Tlaib and Omar have been attacked over the past few months for their support for Palestinian rights and criticism of Israel.

Omar was rebuked by leaders from both major parties in February for suggesting that support for Israel in the US stems from the financial contributions of pro-Israel lobby groups such as AIPAC.

For those remarks, Omar was accused of using an antisemitic trope about Jews gaining power through money.

The congresswoman quickly condemned antisemitism, and she clarified that she was referring to the "problematic role of lobbyists" in US politics, not Jewish-Americans as a whole.

The controversy lingered, however, earning Omar a reputation as an anti-Israel legislator.

But while Omar and Tlaib have been explicitly critical of Israel, their two other colleagues in "the Squad" - Alexandria Ocasio-Cortez, known as AOC, and Ayanna Pressley - have seldom addressed the Middle East conflict since taking office in January.

Pressley even voted on Tuesday in favour of a House resolution condemning the Boycott, Divestment and Sanctions (BDS) movement, which seeks to pressure Israel to end human rights abuses against Palestinians.

By bringing the Middle East conflict into the mix, Trump is sending a rallying cry to his Republican base, where Israel enjoys overwhelming support.

Moreover, putting the spotlight on the Squad highlights the divisions between the pro-Israel, old guard of the Democratic Party and the progressive voices that are more sympathetic to Palestinians.

Trump has admitted that attacking the four Democratic congresswomen is good politics, partly because of Omar's and Tlaib's views on Israel.

"The Dems were trying to distance themselves from the four 'progressives,' but now they are forced to embrace them. That means they are endorsing Socialism, hate of Israel and the USA! Not good for the Democrats!" Trump wrote on Twitter on 15 July.

Days later, Trump retweeted a video by Katie Hopkins in which the far-right British commentator praised the president's focus on the four Democratic lawmakers as a "brilliant strategic move".

I don’t believe the four Congresswomen are capable of loving our Country. They should apologize to America (and Israel) for the horrible (hateful) things they have said. They are destroying the Democrat Party, but are weak & insecure people who can never destroy our great Nation!

That political talking point has been embraced by senior members of the Trump administration and Republican leaders on Capitol Hill, as well.

"We all know that AOC and this crowd are a bunch of communists. They hate Israel; they hate our own country," Republican Senator Lindsey Graham, a close Trump ally, said in an interview with Fox News on 15 July.

At the rally in North Carolina on 17 July, US Vice President Mike Pence praised his boss for "standing up" to the Democratic congresswomen, who he said "denounce support for Israel".

"When our president stands up to radical Democrats who accuse Border Patrol of running concentration camps, use antisemitic slurs to denounce support for Israel, and continually attack America, we stand with President Trump," Pence said.

Ibrahim Hooper, a spokesman for the Council on American Islamic Relations (CAIR), accused Trump of "blowing smoke" to distract from his support for white supremacist and antisemitic ideologies.

In 2018, Trump said there were "very fine people" at a violent neo-Nazi rally in Charlottesville, Virginia, where white supremacist demonstrators chanted "Jews will not replace us."

During his presidential campaign, he also vowed to deport millions of undocumented immigrants and ban Muslims from entering the US, positions that earned him praise from neo-Nazi leaders, including David Duke, a former chief of the Ku Klux Klan.

The white supremacist gunman who killed 51 people at two mosques in New Zealand in March had also lauded Trump in his manifesto, calling the US president a "symbol of renewed white identity and common purpose".

In that context, Hooper told MEE he believed "the pro-Israel lobby in America should be a bit concerned that Donald Trump is constantly associating Israel with racism and white supremacy".

Some pro-Israel groups have questioned the president's rhetoric.

"Using Israel to defend racism only hurts the Jewish community," the group's CEO, Jonathan Greenblatt, wrote on Twitter on 15 July.

#AntiSemitism is on the rise.@realDonaldTrump using Israel to defend his blatant racism only hurts the Jewish community. He doesn't speak for any of us.

We call on ALL leaders across the political spectrum to condemn these racist, xenophobic tweets & using Jews as a shield.

But critics say Trump cares about little beyond his 2020 reelection campaign.

And on Tuesday, the president was back at it, calling Congresswoman Omar an "antisemite" and promising that Republicans would win her Midwestern state of Minnesota in next year's election.

Still, Omar and her colleagues seem undeterred by his attacks.

"We are all the Squad," Tlaib said at a rally for airline employees in Washington on Tuesday, as she addressed picketing workers demanding better pay.

"So I want you to know, while he tweets, we're going to march." 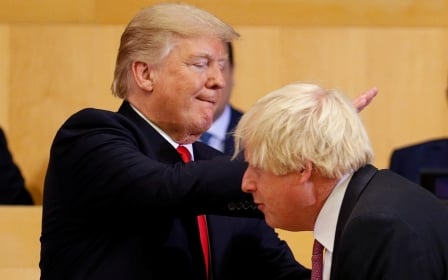 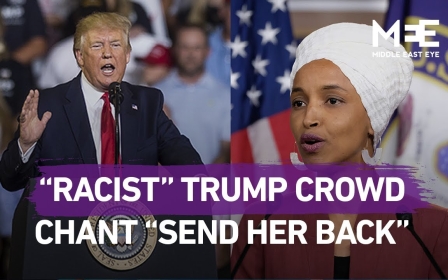 US Politics
Ilhan Omar on Donald Trump: 'I believe he is fascist' 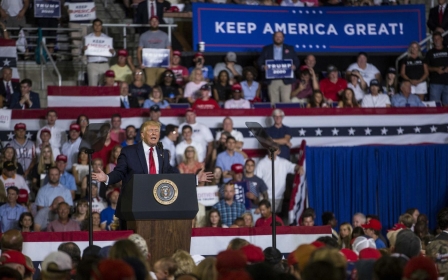