Turkey says Syrian defence of Kurdish forces would result in confrontation, 'and nobody can stop Turkish soldiers' Syria's government said it would enter Afrin to repel Turkish forces, including Turkish-trained FSA rebels (Reuters)
By
MEE and agencies

Syrian government forces are to enter the northern Kurdish enclave Afrin "within hours" to help repel a Turkish offensive, Syrian state media said on Monday, after a deal was struck between the Assad government and Kurdish authorities.

"Popular forces will enter Afrin within hours," Ikhbariya said, citing its own correspondent.

The state news agency SANA said: "Popular forces will arrive in Afrin in the next few hours to support the steadfastness of its people in confronting the aggression which Turkish regime forces have launched on the region.

"This comes in the framework of supporting residents and defending the territorial unity and sovereignty of Syria," the agency added.

A senior Kurdish official said on Sunday Syrian Kurdish forces and the Damascus government have reached an agreement for the Syrian army to enter the canton, which was attacked by Turkish forces in January under an operation Ankara termed "Olive Branch".

"If the regime is entering there to cleanse the PKK and PYD, then there are no problems," Mevlut Cavusoglu said. "However, if it comes in to defend the YPG, then nothing and nobody can stop us or Turkish soldiers."

Badran Jia Kurd, an adviser to the Kurdish-led administration in northern Syria, told Reuters army troops will deploy along some border positions and may enter the region within the next two days.

The deal underscores the increasingly tangled battlefield in northern Syria, driven by a web of rivalries and alliances among Kurdish forces, the Syrian government, rebel factions, Turkey, the United States and Russia.

The complex relationship between the Damascus government and Syrian Kurdish forces, each of which holds more territory than other sides in the war, will be pivotal in how the conflict unfolds.

Ankara launched an air and ground offensive on Afrin last month, targeting the Kurdish YPG militia, which it views as a terrorist group with links to an armed insurrection in Turkey.

Turkey's NATO ally the United States has armed the YPG as part of an alliance it backs in Syria against the Islamic State (IS) group. But while Washington has a military presence in the much larger swathes of Syria than the YPG and its allies control further east, it has not given support to the YPG in Afrin.

With Turkey’s Rush to War Against Syrian Kurds, What Is the Endgame in Afrin? - @aronlund provides 3 scenarios: 1. TR wins 2. TR gets bogged down 3. Assad moves in to stave off TR. Lund suggests 3 may combine & civilians get crushed, which seems possible. https://t.co/TND1zKsSsy

"We can cooperate with any side that lends us a helping hand in light of the barbaric crimes and the international silence," Jia Kurd said.

There was no immediate comment from the Syrian military.

When asked about the reported deal, YPG spokesman Nouri Mahmoud repeated an earlier statement that said the Syrian army had yet to respond to their calls to help protect Afrin.

Although Syrian President Bashar al-Assad's government and the YPG have mostly avoided direct conflict, they have occasionally clashed and they espouse very different visions for Syria's future.

While both have at times suggested a long-term agreement between them might be possible, Assad says he wants to take back the whole country.

Jia Kurd said the agreement with Damascus on Afrin was purely military and included no wider political arrangements.

"When it comes to the political and administrative matters in the region, it will be agreed upon with Damascus in the later stages through direct negotiations and discussions," he said.

He added that there was opposition to the deal which could stand in the way: "We don't know to what extent these understandings will last because there are sides that are not satisfied and want to make [them] fail."

The Syrian government has allowed some Kurdish fighters, civilians and politicians to reach Afrin through its territory, representatives of both sides have told Reuters in recent weeks.

Since the onset of Syria's conflict in 2011, the YPG and its allies have set up three autonomous cantons in the north, including Afrin bordering Turkey. Their sphere of influence expanded as they seized territory from IS with US help, though Washington opposes their political ambitions as does the Syrian government.

The Turkish army began its direct intervention in northern Syria in August 2016, backing Syrian rebels in an offensive to push IS from its border and to stop the YPG linking Afrin to other territory further east.

Turkey has said it could expand its assault to those areas and last week renewed its demands for the YPG to pull out of all parts of Syria west of the Euphrates.

Since October, it has also played a role in the rebel-held Idlib province bordering Afrin, as part of a diplomatic process pushed by Assad's ally Russia via talks in Astana, Kazakhstan.

A Kurdish political official familiar with the deal on Afrin said on Sunday that it was possible Russia would object to the agreement, complicating its own diplomatic efforts with Turkey. 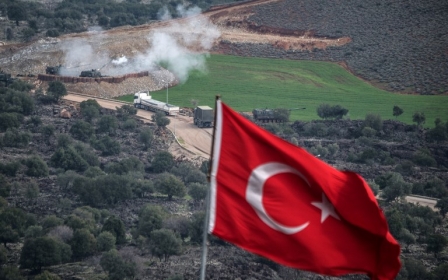