Turkmen caught between IS, Assad and Russian intervention A Turkmen soldier stands guard in Bayirbucak in Latakia, Syria, on 25 November 2015 (AA)
By
Umar Farooq

At the outbreak of the Syrian civil war, thousands of Turkmen – long repressed under the governments of both Hafez and Bashar al-Assad - joined the Free Syrian Army, forming more than 10 brigades in northern Syria.

Almost five years later they have withstood assaults by the Syrian army, have fled the horrors of the Islamic State group, and now face the overwhelming firepower of the Russian air force.

But it is only now, after the entry of Russia, and most recently their role in the downing of a Russian plane by Turkey, that the Turkmen have come to prominence among the myriad minorities and groups fighting in Syria.

Turkmen fighters were seen in videos posted on social media shooting at the two pilots of the downed jet as they parachuted to earth, killing one of them. They also destroyed a Russian helicopter with a US-made TOW rocket that was part of a rescue mission searching for the pilots.

So who are the Turkmen, where do their loyalties lie, and who are their chief backers?

As the name suggests, the Turkmen are closely aligned and related to the Turks, and are thought to number up to three million in Syria. Some speak Turkish as well as Arabic, but most have kept cultural connections with their heritage.

The Turkmen settled in Anatolia in the 9th century and as far back as the 16th century made up a sizable portion of the Ottoman caliphate's army, according to Huseyin Rasit Yilmaz, an expert on Turkic ethnicities at the Economic Policy Research Centre in Ankara.

But after World War I, with the dissolution of the Ottoman empire, the mainly Sunni Muslim Turkmen became another minority spread across the newly created Syria and Iraq.

In the 1960s and 1970s, campaigns to Arabicise the population by the Baath Party in Syria and Iraq left them marginalised. In the 1970s, for example, Syrian leader Hafez al-Assad banned the Turkish language, and seized Turkmen land.

In 1991, the Turkmen in Iraq allied with Kurdish forces in a failed uprising against Baghdad. Later, half a dozen Turkmen groups inside Iraq formed the Iraqi Turkmen Front, which offered political opposition to Saddam Hussein, with political support, says Yilmaz, from Turkey, where a number of the group's leadership live.

The Turkmen take up arms

During the uprising against Bashar al-Assad in 2011, Turkmen fighters were among the first to organise against the government, forming their own brigades and aligning with the Free Syrian Army.

Their links with Turkey, which opposes Assad, have remained strong and, according to analysts, the Turkmen in the years since have acted not only in direct co-ordination with Turkey – but also as mediators between Ankara and more Islamist groups fighting in Syria, including the al-Qaeda affiliated al-Nusra Front.

"They are a small minority," said Gareth Jenkins, an Istanbul-based analyst with the Silk Road Studies Programme. "But they are very important for Turkey because they are the group it has closest contact with. Turkey remaining involved with them is extremely important for its plan to overthrow Assad."

Indeed, in March 2014, an alliance of the FSA and other rebel groups travelled through Hatay province to attack Syrian government-controlled areas in Kassab, just across the border from Turkey. During the battle, Jenkins said, Turkmen rebels worked alongside five other groups, including al-Nusra Front.

But it was the entry of Russia into the Syrian war that hardened Turkish public rhetoric - and support - for their chief allies in Syria. Russia has been accused of bombing Turkmen forces - and villages - as part of its campaign against "terrorists" in support of Assad, something Turkey has strongly protested against.

Russian planes hit villages between Homs and Hama, according to Tariq Solu, the vice-chairman of the Syrian Turkmen National Movement Party, one of several groups opposed to Assad’s government in Syria.

"We are condemning this barbarian attack in the strongest way,” said the Turkish Prime Minister Ahmet Davutoglu. "Nobody can legitimise attacks targeting our Turkmen, Arab and Kurdish siblings there via claiming to have been fighting against terror."

And earlier this month, the head of a Turkmen brigade in Syria was killed by government forces, triggering protests at the Russian embassy in Ankara and around the country, including demonstrations by Turkish nationalists that had until recently questioned Turkey's involvement in the Syrian war altogether.

Turkey's opposition parties – who have accused the AK Party of supporting IS in Syria – have insisted the Turkmen are moderate rebels. Russia, which has insisted it is hitting IS and groups like Nusra, now finds itself faced with Turkish nationalist fervour.

"Damascus and Moscow are trying to portray this as being a fight against Islamic extremists, which it isn’t," said Yilmaz. "Syrian Turkmen are far from being religious radicals, which is why radicals have little influence in their regions."

'Turkmen are not Islamic State'

Could the Turkmen be in any way associated with the Islamic State?

“ISIS is hundreds of kilometres away,” said Salem Muslit, a spokesman for the Syrian National Coalition, an umbrella group that ostensibly commands the FSA.

“Most of these [Russian] strikes are on the FSA and moderate fighters, like the Turkmen, or against civilians on hospitals. Less than five percent of Russian attacks are on ISIS.”

In the past week, air strikes have intensified in Bayirbucak, where some Turkmen have formed brigades under the FSA to fight against government forces.

“Bayirbucak has been under the control of Assad since the beginning of the war,” said Solu, “and the attack now by Russian planes has killed 50-60 people, mostly civilians but some fighters as well. They have hit homes and a hospital as well.”

Solu, who moved to Turkey this September after IS took over his hometown north of Aleppo, said there is little sympathy among Turkmen for IS.

“Everyone from my family lives in Turkey now because of IS, which began attacks on our area in January 2014,” he said. “Everything we had is now under IS control. They took our homes and our shops, everything we had, because the men in my family - from children to old men, fought IS with the FSA for nine days. But they knew how to fight better than us, and they had better weapons, so we left for Turkey. We lost that war.”

Solu hopes the downing of the Russian jet will change things. “We don't need Turkish troops in Syria, just more aid from Turkey and the international alliance.  We need sophisticated weapons to fight Russian jets.” 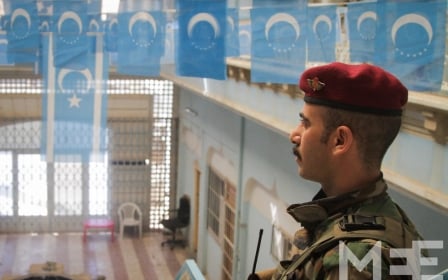