Palestinians accuse UAE of stabbing them in back, while Egypt, Bahrain and UK praise announcement Israel hails move as an historic day for two countries, while UAE says agreement was a win for diplomacy in region (AFP/File photo)
By
MEE staff

The United Arab Emirates has become the first Gulf Arab country to reach a deal on normalising relations with Israel, capping years of discreet contacts between the two countries.

The UAE said it was a "win" for diplomacy in the region, while Israel hailed Thursday's announcement as an "historic day" for the two countries. 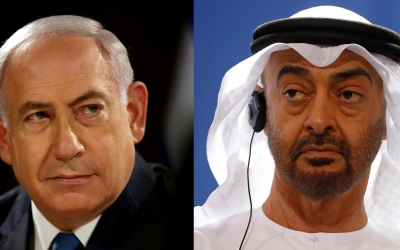 Delegations from both countries are expected to meet in the coming weeks to sign bilateral agreements on investment, tourism, direct flights, security, telecommunications and other issues.

The UAE and Israel are also set to exchange ambassadors and open mutual embassies.

Common concerns over Iran's regional influence and activities have also led to a limited thaw in relations in recent years.

Here's how some nations have reacted to the agreement:

Palestinian President Mahmoud Abbas denounced Israel's accord with the UAE in a statement issued by his spokesman late on Thursday.

"The Palestinian leadership rejects and denounces the UAE, Israeli and US trilateral, surprising, announcement," said Nabil Abu Rudeineh, a senior adviser to Abbas.

'The Palestinian leadership rejects and denounces the UAE, Israeli and US trilateral, surprising, announcement'

Abu Rudeineh, reading from a statement outside the Palestinian Authority's headquarters in Ramallah in the occupied West Bank, said the deal was a "betrayal of Jerusalem, Al-Aqsa and the Palestinian cause".

Hanan Ashrawi, a senior Palestinian Authority official, said Israel had been rewarded for its actions in Palestinian territories since 1967.

"The UAE has come out in the open on its secret dealings/normalization with Israel. Please don't do us a favor. We are nobody's fig leaf!" she tweeted.

A spokesperson for Hamas said the UAE had essentially "stabbed" the Palestinians in the back, while another said it "does not serve the Palestinian cause".

The Islamic Jihad movement in Palestine called the agreement a "surrender".

The UAE Ambassador to the US Youssef al-Otaiba said the agreement is a "win" for diplomacy in the region.

In announcing that the agreement had been made, Abu Dhabi Crown Prince Mohammed bin Zayed said that "an agreement was reached to stop further Israeli annexation of Palestinian territories".

He added that the UAE and Israel have set up a "roadmap towards establishing a bilateral relationship".

Anwar Gargash, a senior UAE official, said the deal helps defuse "the ticking time-bomb" of Israel's planned annexation of settlements in the occupied West Bank that was threatening a two-state solution to the Israeli–Palestinian conflict.

Gargash, who serves as the Gulf state's minister of state for foreign affairs, said the agreement was a bold but necessary step to take in the region.

"The region is very polarised. You will hear the usual noise but I think it is important to move forward," Gargash said.

Iran's former deputy foreign minister, Hossein Amirabdollahian, slammed the agreement, saying it did not maintain peace and security in the region, and rebuked Abu Dhabi for "turning back" on the Palestinian cause.

"Abu Dhabi behavior has no justification, turning back on the Palestine cause. W/ that strategic mistake, #UAE will be engulfed in Zionism fire."

Egyptian President Abdel Fattah el-Sisi, a close ally of the UAE, said he "values the efforts" of the UAE and Israel to "achieve prosperity and stability for our region".

"I followed with interest and appreciation the joint statement between the United States, United Arab Emirates and Israel to halt the Israeli annexation of Palestinian lands and taking steps to bring peace in the Middle East," Sisi said on Twitter.

"I value the efforts of those in charge of the deal to achieve prosperity and stability for our region."

Jordan said the deal could push forward stalled peace negotiations if it succeeded in prodding Israel to accept a Palestinian state on land that Israel has occupied since the 1967 Arab-Israeli War.

"If Israel dealt with it as an incentive to end occupation... it will move the region towards a just peace," Foreign Minister Ayman Safadi said in a statement on state media.

Bahrain welcomed the agreement, saying it stopped Israeli annexation plans and raised the chances of peace, according to the country's state news agency BNA.

The small Gulf state is a close ally of Saudi Arabia, which has not yet commented on the agreement.

Bahrain also praised the US for its efforts towards brokering the deal.

"It was my profound hope that annexation did not go ahead in the West Bank and today's agreement to suspend those plans is a welcome step on the road to a more peaceful Middle East," Johnson said in a tweet on Thursday.

In a statement on Thursday, Le Drian said Israel's decision to suspend its planned annexation of areas of the occupied West Bank under the historic agreement is a "positive step

The accord paved the way for a resumption of talks between Israelis and Palestinians with the aim to establish two states, he said, calling it "the only option" to achieve peace in the region.

United Nations Secretary-General Antonio Guterres welcomed "any initiative that can promote peace and security in the Middle East region", a UN spokesman told reporters about the UAE-Israel agreement.

Stephen Dujarric, the spokesman, said the UN would deliver a further statement later in the day.