Bahraini men hold placards bearing the portrait of Sheikh Ali Salman, head of the Shia opposition movement al-Wefaq, during a protest on May 29, 2016 (AFP)
By
Jamie Merrill

Funding for the parliament, which critics say is a "rubber-stamping" body for the kingdom’s ruling family, was revealed in a breakdown provided under the Freedom of Information Act.

The funding, which is part of the Foreign Office's £2m "technical assistance" programme in the country, supports officials in the Council of Representatives despite internal concerns from advisers that it could be used as PR “fig leaf" over human rights concerns.

The revelation that the UK is funding the parliament comes as the Gulf state reverses key rights reforms and carries out executions in the face of international condemnation.

The British government says it opposes the death penalty, but it is working with Bahrain’s parliament where politicians are encouraging the King to execute prisoners - Human rights group Reprieve

Bahrain has been rocked by unrest since March 2011 when security forces brutally crushed an Arab Spring-inspired uprising.

The largest opposition group in the country, Al-Wefaq, boycotted the parliament in 2014 before it was banned last summer, while the party’s secretary general Sheikh Ali Salman is languishing in prison after he was sentenced to nine years for giving speeches against the government.

MPs have also backed the use of the death penalty for critics of the government, and last week Bahrain executed three men charged with killing members of the security forces.

The three Shia men were convicted of killing an Emirati police officer and two Bahraini police officers in a 2014 bomb attack, but human rights campaigners say that confessions were extracted from Abbas al-Samea, 27, Sami Mushaima, 42, and Ali al-Singace, 21, under torture, including beatings, electric shocks and deprivation of food and water.

Two more men - Mohamed Ramadhan and Hussain Ali Moosa - are now at risk of execution, according to right group Reprieve. Both men claim they were tortured and their claims have not been properly investigated.

Maya Foa, a director of Reprieve, told MEE: “The British government says it opposes the death penalty, but it is working with Bahrain’s parliament where politicians are encouraging the King to execute prisoners like Mohammed Ramadhan, who has always insisted on his innocence and was tortured into making a false confession.

“Just weeks after Bahrain’s parliament made alarming calls for death sentences like his to be implemented without delay, a firing squad executed three men who were also tortured into falsely confessing. The UK Foreign Office should urgently tell Bahrain’s authorities that the executions following such deeply unfair trials are unconscionable."

In Westminster, political pressure has been building over the FCO's response to the executions and ongoing British support for Bahrain, and the Liberal Democrats have called for funding to Bahrain to be “stopped immediately".

Tom Brake MP, the party’s foreign affairs spokesman, told MEE: “The FCO must undertake a root and branch review to determine whether any of the UK funds invested in prisons or parliament in Bahrain are leading to greater respect for human rights.

"After the recent extrajudicial executions carried out in Bahrain, it’s looking more and more apparent that they are not and funding must be stopped immediately."

The FCO must determine whether any of the UK funds invested in prisons or parliament in Bahrain are leading to greater respect for human rights - Tom Brake, Liberal Democrat foreign affairs spokesman

MEE can also reveal details of 11 projects in Bahrain that the British government is funding through the Conflict, Stability and Security Fund (CSSF), a controversial pot of aid money that is currently the focus of an investigation by British MPs over transparency concerns.

These projects range from implementing a Criminal Justice Board and creating a social inclusion unit to a contract with Her Majesty’s Inspectorate of Prisons to build the capacity of Bahrain’s National Preventive Mechanism against torture.

The CSSF, which operates in more than 40 countries, is overseen by the National Security Council, a secretive cabinet committee including senior ministers, military chiefs and secret service heads.

Last year MPs probing the fund, which is worth more than £1bn a year, expressed frustration that Mark Lyall, the national security adviser to the prime minister, was providing scant details of how the money is spent.

During an evidence session Lyall refused to rule out granted funds from the CSSF fund to countries that use torture.

Unlike the majority of the aid projects in Bahrain, the funding for the Bahraini parliament comes from the FCO's Bilateral Programme Fund. Few details are known about the project, which MEE understands is still active and has received regular funding since it was first established in 2015.

The Foreign Office has refused to disclose which organisation is running the programme and the contractor's name was redacted from the Freedom of Information Act data, but MEE can reveal the project is run by the Westminster Foundation for Democracy (WFD), which lists senior MPs including Conservative Andrew Rosindell, former SNP leader Alex Salmond and Labour’s Margaret Hodge on its board.

According to WFD documents, staff at the organisation, an executive non-departmental body funded by the Foreign Office, noted "significant public concerns" about Bahrain’s human rights record and expressed concerns that the programme risked “being used as a fig leaf for the Bahraini authorities".

A source close to the discussions, told MEE: "It is of the nature of WFD’s work that there will sometimes be political risks involved; the point is to support democracy in countries where democratic accountability is weak."

The WFD is understood to be helping Bahrain’s parliamentarians understand how to draft laws and is also assisting in the creation of a parliamentary calendar.

A spokesperson for WFD said it works to support democratic institutions and law and order worldwide. They said that the on-going project in Bahrain is “focusing on building technical skills for parliamentary staff."

The cost of the project is not known. Campaigners at the London-based Bahrain Institute for Rights and Democracy (BIRD), which obtained the data on Britain's aid to Bahrain, says ministers are still refusing to give a breakdown of how taxpayers' money is being spent in Bahrain. The group is planning to take the case to the Information Commissioner.

Sayed Alwadaei, director of advocacy at BIRD, told MEE: "UK involvement goes beyond technical assistance, forming a spider’s web across Bahrain’s prisons, police, judiciary and now parliament, despite the majority of opposition leaders languishing behind bars, an unprecedented crackdown on civil society and a sharp deterioration in human rights. The UK is managing repression in an authoritarian regime, paid by the taxpayer."

The UK has already provided over £5.1m of technical and human rights assistance to Bahrain since 2012, and last week the Guardian reported that is due to spend a further £2m in Bahrain this year.

Despite this dedicated support, the Bahraini government continues to curtail freedoms of expression, association and assembly and crackdown on dissent, according to Amnesty International.

A spokesperson for the FCO said: “We believe that UK support to Bahrain’s reform programme is the most constructive way to assist in achieving long-lasting and sustainable reform in Bahrain. While it will take time to see the full results, we believe UK support is having a direct, positive impact on areas of concern." 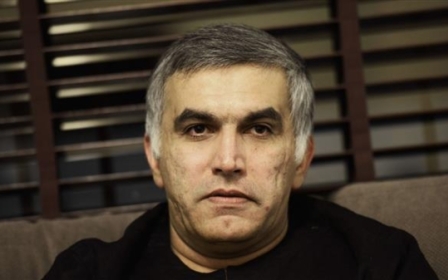