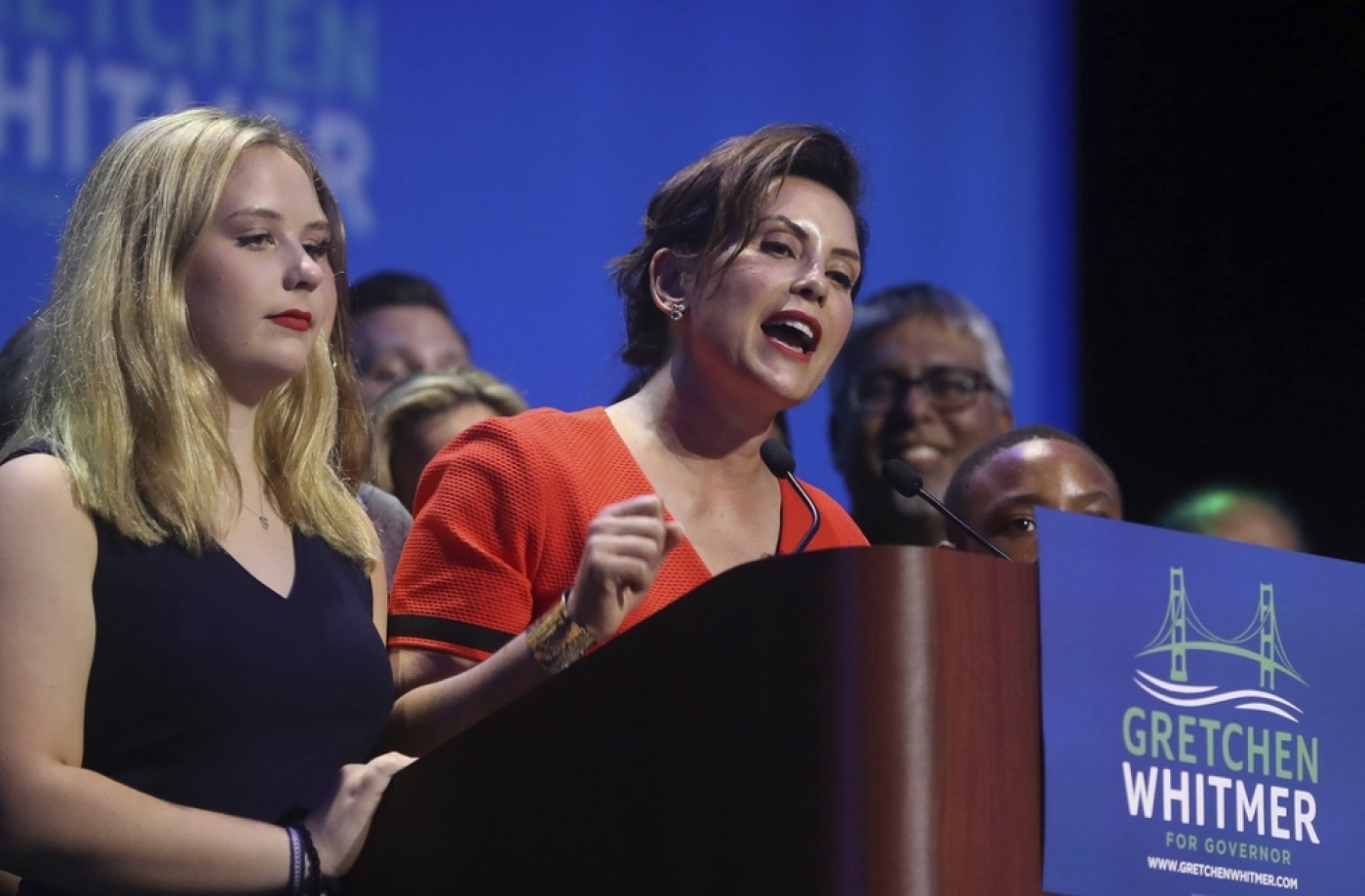 DEARBORN, United States - Michigan Democratic candidate for governor Gretchen Whitmer wants to "fix the damn roads" as her campaign slogan proclaims. But in a race that would normally be focused on local issues, her stance on the Israeli-Palestinian conflict has become a relevant topic that may alienate potential voters.

Whitmer, who defeated progressive Arab American candidate Abdul El-Sayed to win the party's nomination in August, came out in support of an anti-boycott bill that was passed by Michigan legislators last year. The law bans the state from retaining contractors that boycott "strategic partners", in an effort to suppress the Boycott, Divestment and Sanctions (BDS) movement.

The Democratic candidate's position has angered activists who campaign against the Israeli occupation and mistreatment of Palestinians, which they say amount to apartheid.

In a state where the Arab vote can be decisive, Whitmer's stance on punishing people who boycott Israel may prove costly, activists say.

Michigan is one of many states where anti-boycott laws have become an election issue. Critics of these bills say they violate the constitutionally protected right to free speech.

Democratic candidates across the country are facing attacks questioning their commitment to Israel.

Gretchen Whitmer and Garlin Gilchrist are the most extreme Democrat candidates in Michigan history—opposing immigration enforcement, bashing Israel, supporting Hamas. They are an extreme risk we can’t take. pic.twitter.com/jXYkTlSxPI

Gilchrist, who would become Whitmer's deputy if she wins, had sent out a series of tweets critical of Israel nearly a decade ago during the 2009 Israeli war on Gaza. While he never praised Hamas, he said the Palestinian group came to power through democratic means.

Hamas had won internationally-monitored legislative elections in the Palestinian territories in 2006.

"Hamas is a legitimately elected party that only rose to power b/c of Israeli aggression & Western complicity/enablement," Gilchrist wrote in 2009.

Shortly after Whitmer announced Gilchrist as her running mate, right-wing and pro-Israel media outlets published stories highlighting the tweets, prompting the gubernatorial candidate to affirm her support for Israel and opposition to BDS.

In a statement that is no longer available on her campaign website, Whitmer, a former state Senate Democratic leader, listed resolutions in favour of Israel that she sponsored when she was a lawmaker.

"I strongly support the bipartisan anti-boycott legislation that was signed into law by Governor [Rick] Snyder last year and will do everything in my power to uphold it as Michigan’s next governor," she said.

The remarks irked Arab American activists who view the law as an attack on free speech to censor the debate about Palestine.

What we're asking these candidates to do is to simply defend the US Constitution.

Ahmad Abuznaid, director of the National Network of Arab American Communities (NAAC), called the anti-boycott law a direct attack on the First Amendment of the US Constitution.

"We're not asking any of these elected officials to become pro-Palestine overnight. We're not asking them to call Israel what it is - which we believe is an apartheid and settler colonial state. We don't need all that from them," Abuznaid told MEE.

"What we're asking these candidates to do is to simply defend the US Constitution."

The American Civil Liberties Union (ACLU) has warned of a "disturbing surge of government-led attempts to suppress the speech of people on only one side of the Israel-Palestine debate".

A report published by the group in June said some 24 states have adopted anti-boycott measures. It also highlighted proposed Department of Education guidelines that it says conflate criticising Israel with anti-Semitism.

"These efforts to  censor criticism of the Israeli government and advocacy for Palestinian rights do a disservice to the real problem of anti-Semitism in the United States," the report said. "Addressing anti-Semitism is important and necessary, particularly in the current climate, but it does not require silencing constitutionally protected protest or expression."

A federal judge blocked an anti-BDS law in Kansas earlier this year after a school teacher sued the state for requiring her to certify that she does not engage in a boycott of Israel.

Last year, a Houston suburb drew condemnations and ridicule for trying to deny relief funds for residents who boycott Israel after a devastating hurricane.

Still, candidates for governor are coming under pressure from Israel's supporters to come out in support of these laws.

In the southern state of Georgia, Democratic nominee for governor Stacey Abrams has faced attacks for voting against an anti-boycott bill in 2016. Abrams, a former state legislator, has denounced BDS, labelling the movement as anti-Semitic without evidence. But she has stood by her position on the 2016 measure.

"She is a friend of Israel and an opponent of BDS; however, Abrams makes public policy decisions based on protecting the free speech rights of all including the right to boycott," Abrams campaign said in a statement published by Medium last year.

The right to spend - or not spend - your money as you choose is a deeply held right guaranteed us by the Constitution.

Similarly in Florida, progressive Democratic candidate Andrew Gillum has been denounced by his opponents and right-wing media outlets for associating with groups and individuals who advocate for Palestinian rights.

Earlier this year, Florida lawmakers tried to ban concerts by Australian singer Lorde, citing the state's anti-boycott law, after the popstar cancelled a show in Israel.

Gillum has said he is against BDS, but is yet to take a clear position on the anti-boycott law.

His campaign did not return MEE's request for comment.

"I do not support BDS," Gillum was quotes as saying by the Miami Herald. "A two-state solution is the only solution that truly pushes us towards peace. I’ll always support the right to free speech and peaceful protest, but I also believe that any tactics that seek to counter a two-state solution makes our path to peace harder."

Back in Michigan, Whitmer's former Democratic opponent El-Sayed denounced her stance on the law despite pledging support for her.

"The right to spend - or not spend - your money as you choose is a deeply held right guaranteed us by the Constitution," he wrote in a Facebook post earlier this month. "And per the ACLU, anti-BDS policies violate that right. Whether it be fossil fuels, weapons of war, or another country, Michiganders deserve the right to know they will be protected, and not penalized, for their choices about how to use their money."

Maya Berry, executive director of the Arab American Institute, said the controversy around anti-boycott laws is not a debate about foreign policy, but about the domestic implications of the Palestinian-Israeli conflict on certain communities.

"In this case, what we're talking about is the age-old defining civil rights process of using boycotts, non-violent boycotts, to protest something," she told MEE. "Separate from the foreign policy conversation about whether Israel is a legitimate target of this or not, I am more interested in saying: How are you protecting our First Amendment rights?"

Whitmer's campaign stressed that she is looking to bring the state together, pledging to form a diverse cabinet that would include Arab and Muslim Americans.

"Gretchen Whitmer believes that supporting both the State of Israel and serving as a friend to Michigan's Arab American and Muslim communities are not mutually exclusive," campaign spokeswoman Nicole Simmons told MEE in an email.

When asked specifically about the anti-boycott law, Simmons added in a subsequent email: "As governor, Gretchen will be committed to ensuring Michigan's Arab Americans have a respected voice in her administration. While she does not believe the anti-boycott bill violates the 1st Amendment, Gretchen is remaining focused on bringing people together to solve problems and build a better Michigan for all of us."

Berry said the notion that a politician may support Israel and still be good to the Arab American community is irrelevant in the context of the anti-boycott law.

"It's not about being a friend to the Arab American community; I need her (Whitmer) to be a friend of the First Amendment," Berry told MEE.