US election 2020: Where does Bernie Sanders stand on Middle East issues?

As Vermont senator pulls ahead in race for Democratic presidential nomination, we take closer look at his views on the region 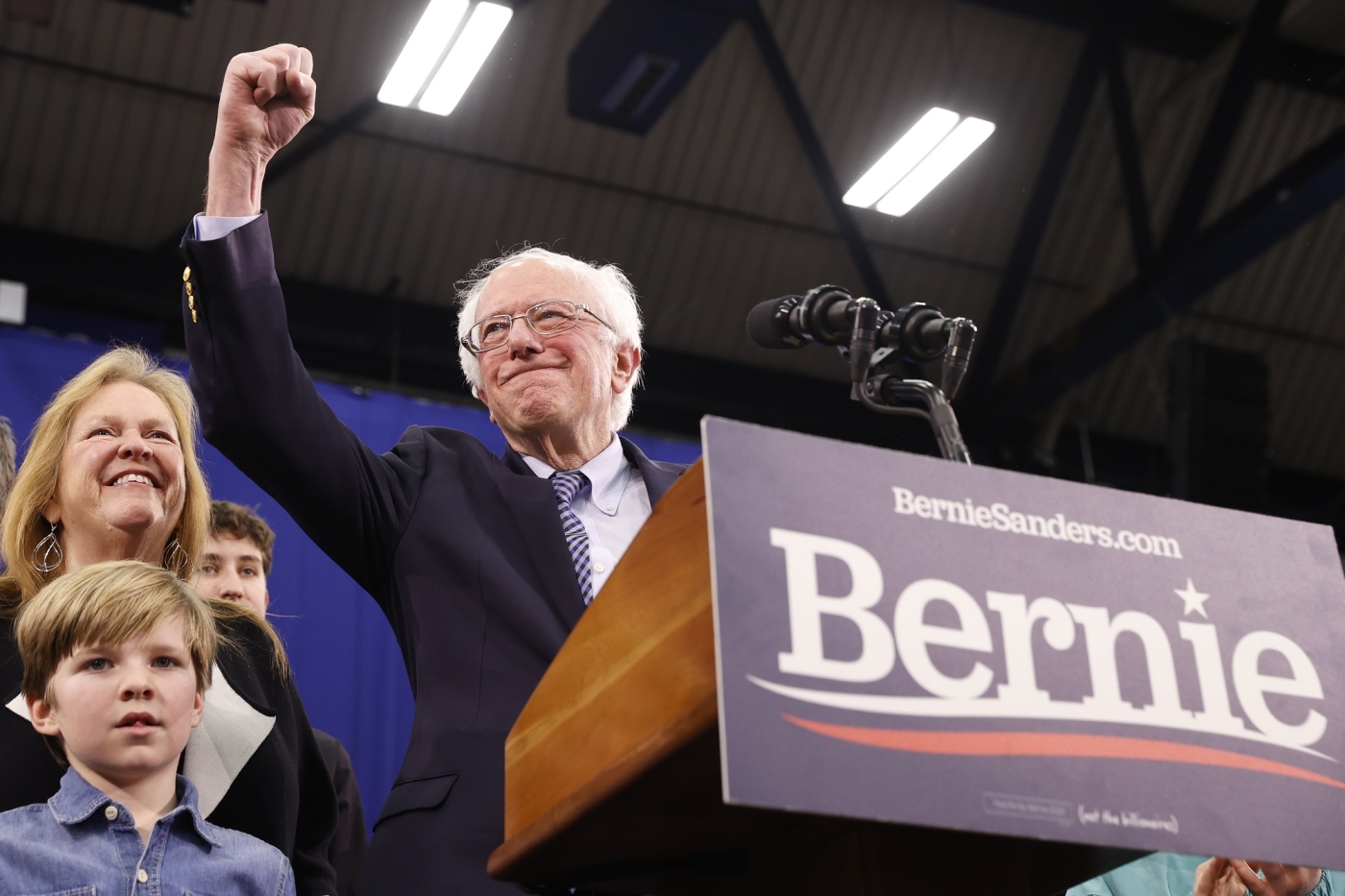 Bernie Sanders has taken the lead in the Democratic presidential race.

The Vermont senator won the New Hampshire primary on Tuesday night in a close race ahead of former South Bend, Indiana mayor Pete Buttigieg as an ever-shrinking pool of candidates press on to primaries in South Carolina and Nevada.

Recent polls show Sanders, who has spent much of his career as a political outsider, pulling ahead of Democratic establishment favourites, showing the leftward shift within the party and previewing a fierce battle leading up to the convention in July.

Sanders does not espouse many of the centrist beliefs of the top echelon of the Democratic party, especially when it comes to foreign policy.

During a 2016 presidential debate ahead of the New York primary, he stunned observers when he criticised former Secretary of State Hillary Clinton for failing to address the "needs of the Palestinian people" in a major policy speech she had given on the conflict.

"We cannot continue to be one-sided. There are two sides to the issue," he said at the time.

Who is Bernie Sanders?

Sanders entered into the world of politics as an outlier - running as a Liberty Union Party candidate for the US Senate in Vermont in 1971. He got 2 percent of the votes in that election.

In the early 70s, he ran for governor and the US Senate again as a candidate for the left-wing party. But he never exceeded 6 percent of the votes.

It wasn't until 10 years after his first candidacy that Sanders won an election. In 1981, he became the mayor of Burlington, Vermont. And even as a local official, he opposed wars and wrote to then-President Ronald Reagan warning against military conflict.

"During my tenure as mayor, we made the point that excessive spending on the military and unnecessary wars meant fewer resources to address the needs of ordinary people," he wrote in his 2016 book, Our Revolution.

In 1990, Sanders was elected to the House of Representatives as an independent. And in 2006, he won the US Senate seat he had sought in 1971.

Although he maintained his label as an independent, Sanders operated largely as a member of the Democratic Caucus in Congress. In 2016, he ran for president but lost the Democratic Party's nomination to Clinton.

As a self-proclaimed democratic socialist, Sanders embodies the leftward shift within the Democratic party.

His domestic policy proposals, including universal health care and free college education, have been described as "radical".

His foreign policy plans have also strayed away from mainstream consensus in Washington, but where does he stand on issues relating to the Middle East?

As the lead sponsor for a resolution to end US support for the Saudi-led war in Yemen, Sanders has been one of Riyadh's most vocal critics on Capitol Hill.

The senator had helped lead efforts to pass the resolution in the Republican-controlled senate by courting anti-interventionist Donald Trump allies, including Senator Rand Paul.

"In too many cases, our weapons are being used to kill civilians," Sanders said in March 2019.

The anti-war resolution was eventually vetoed by the White House. But Sanders said he will end American support to the Saudi war effort if elected president.

"The reality is that the US-Saudi relationship needs to change,"  he told the Council on Foreign Relations last year.

"It is based on cheap oil, millions of dollars of arms sales, a complete disregard for Saudi Arabia's human rights violations, and willful blindness when it comes to Saudi's spread of religious radicalism."

Sanders has also called for accountability for the murder of Jamal Khashoggi, denouncing the "despotic" Saudi government.

The slain Washington Post journalist had said in an interview published after his murder that Sanders was the only US politician willing to push back against Saudi Arabia's powerful crown prince, Mohammed bin Salman (MBS).

"Do you see anybody in America except for Bernie Sanders who is calling for putting pressure on MBS? I only saw Bernie Sanders, but no one else," Khashoggi told Newsweek before he was killed by Saudi government agents on 2 October 2018.

Beyond criticising the kingdom, Sanders has proposed brokering talks between Tehran and Riyadh to mitigate their regional rivalry.

"We have got to bring Iran and Saudi Arabia together in a room under American leadership and say we are sick and tired of us spending huge amounts of money and human resources because of your conflicts," the senator said at a debate in November.

Sanders has vowed to return to the Iran nuclear deal on the first day of his presidency. The senator has been arguing that the agreement prevented war with the Islamic Republic and blocked Tehran's path towards a nuclear weapon.

After the recent round of tensions between Washington and Tehran, which culminated in the US assassination of top Iranian general Qassem Soleimani, Sanders stressed the need for Trump to seek Congress' approval before authorising strikes against Iran.

"Trump makes decisions impulsively, without explanation, and as in this case as in the past, without any congressional consultation," Sanders said in January.

"I believe that a key step in ending our endless wars is for Congress to reassert its constitutional authority over matters of war."

While Sanders' position on returning to the diplomatic table with Iran is the norm in the current Democratic field, he was only one of only two senators to vote against a bill to impose new sanctions against Iran in 2017.

The bill, which passed with the support of other 2020 Democrats, including senators Amy Klobuchar and Elizabeth Warren, came before Trump nixed the deal.

The multilateral agreement, known as the JCPOA, had seen Iran curb its nuclear programme in exchange for lifting sanctions against its economy.

Sanders had cautioned that the sanctions' bill came at a time when Trump was considering leaving the JCPOA - which he eventually did.

"I think new sanctions on Iran at this time take us in a dangerous direction," Sanders said in 2017.

Sanders has been calling for a fair American approach to the conflict in the Middle East. As the sole serious Jewish candidate in the race, he has rejected the notion that being critical of the Israeli government makes Israel's detractors antisemitic.

"Israel has the right to not only exist, but to exist in peace and security," Sanders said on the debate stage in December.

"But what US foreign policy has to be about is not only being pro-Israel, we must be pro-Palestinian as well."

The senator has spoken at length about tackling the humanitarian crisis in Gaza, and he was the first candidate to suggest using US aid to Israel as leverage to compel the Israeli government to stop its abuses against Palestinians.

"What's going on in Gaza right now... is absolutely inhumane; it is unacceptable; it is unsustainable," Sanders said in October.

"So I would use the leverage - $3.8 billion is a lot of money, and we cannot give it, carte blanche, to the Israeli government or for that matter to any government at all. We have a right to demand respect for human rights and democracy."

The 78-year-old senator's call for an even-handed policy on the conflict in the Middle East seems to represent the shift in Democratic attitudes towards Israel, especially in the younger, more progressive base of the party.

And the views of Sanders himself have shifted over the years. In 2014, he was confronted by his constituents in Vermont over his tacit justification for Israeli attacks on civilian facilities in Gaza during a war that claimed the lives of more than 2,200 Palestinians that year.

The senator advocates a two-state solution to the conflict based on the 1967 lines with Jerusalem as a shared capital for both Israel and Palestine.

"Ultimately, it’s up to the Palestinians and Israelis themselves to make the choices necessary for a final agreement, but the United States has a major role to play in brokering that agreement," he told the Council on Foreign Relations in 2019.

"My administration would also be willing to bring real pressure to bear on both sides, including conditioning military aid, to create consequences for moves that undermine the chances for peace."

As a member of the House of Representatives, Sanders opposed the 2003 US-led invasion of Iraq - a point that he repeatedly uses to criticise his 2020 opponent Biden, who supported the war.

"Joe, you talked about working with Republicans and getting things done. But you know what you also got done? And I say this as a good friend. You got the disastrous war in Iraq done," he told Biden at a debate in October.

"I believe the United States should stand for human rights, especially with governments that receive large amounts of US aid, as Egypt does. All people have the right to protest for a better future. Sisi should respect that right."

"The Arab Spring rose up to fight corruption, repression, inequality and austerity," Sanders wrote. "The Lebanon and Iraq protests show this spirit is still very much alive. If we want a progressive future, we need to build up a global movement of and for working people."

After graduating from the University of Chicago, Sanders lived briefly with his wife at the time in small, communal Israeli farms, known individually as kibbutz.

In his autobiographical book, Our Revolution, Sanders reflects fondly on his time in Israel and describes the time he spent in those communities as a "unique experience".

"The kibbutz was owned by the people who live there, the 'bosses' were elected by the workers, and the overall decisions for the community were made democratically."